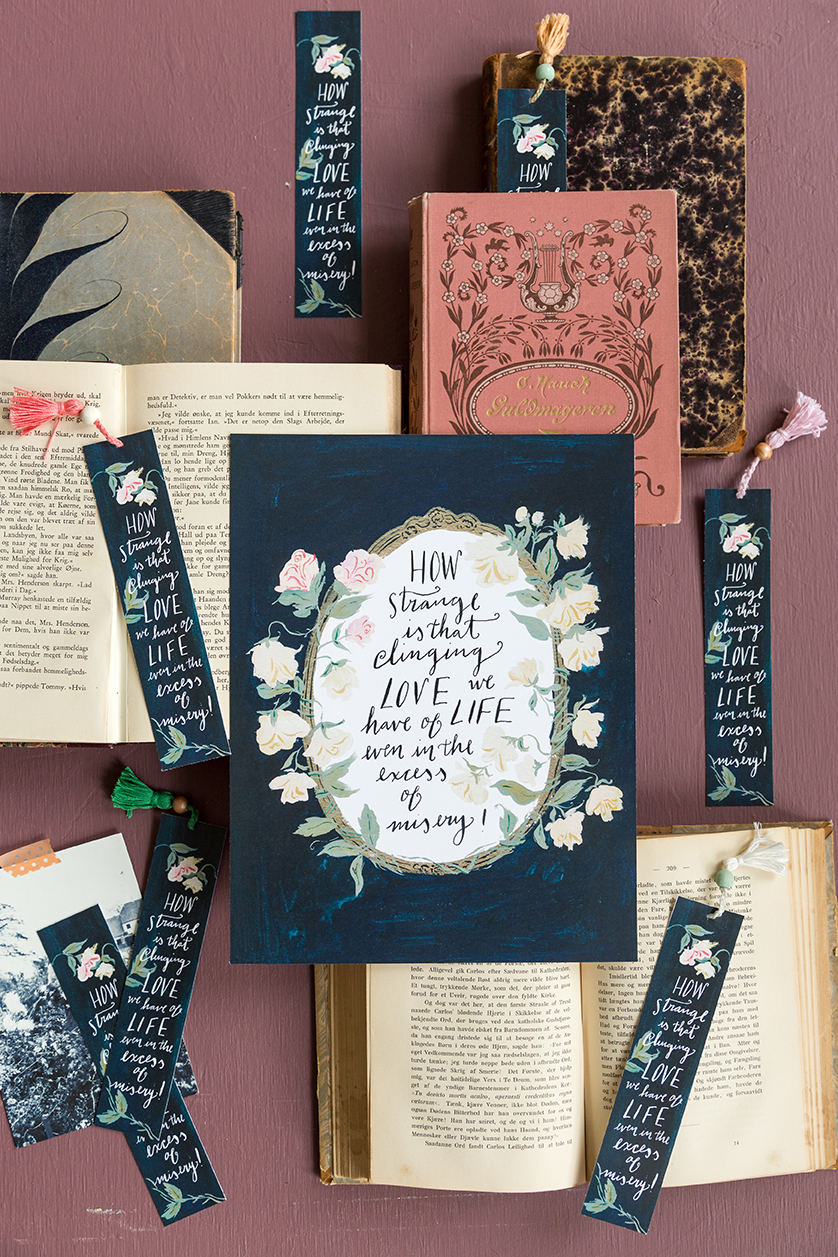 What do you think of Frankenstein so far? Can you believe a teenager wrote this story?? And as part of a contest, too! On a dark night near Lake Geneva, Switzerland, in 1818. Lord Byron challenged his closest friends to create a ghost story. Shelley’s was published two years later. It was revised and printed again in 1831 (the version we are reading). Pretty amazing! If you’re reading it for the first time, has it surprised you?? This is my second time around, and I’m paying more attention this time. 🙂 OK, the tricky thing about a classic book like this is that you can find discussion points and questions just about anywhere. Coming up with some original questions was not easy, but we’ve thought of a few.

We partnered up with Emily Isabella as this month’s guest illustrator to create a lovely printable bookmark and quote that adds a little bit of beauty to the creepy! Download it below! 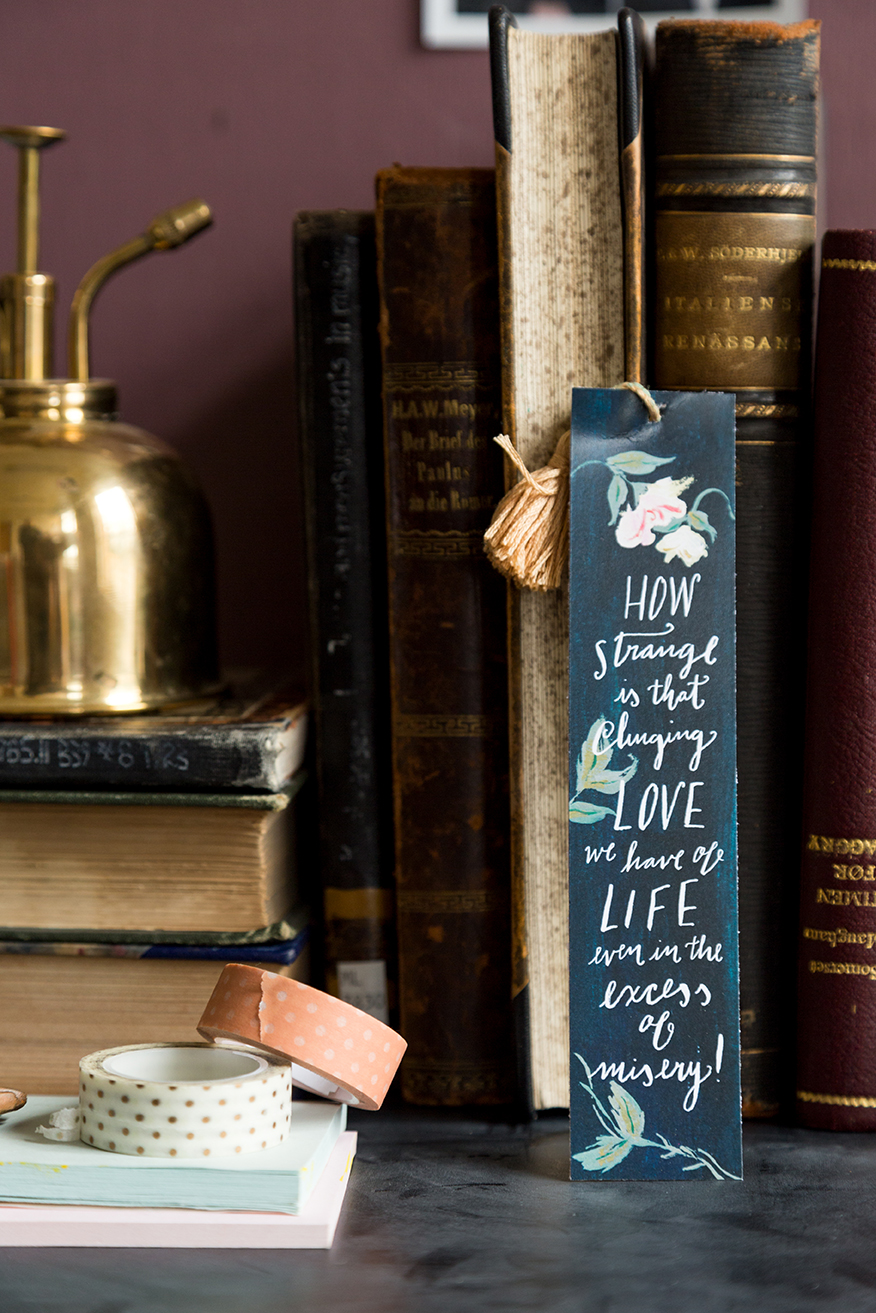 1. One main theme in Frankenstein is about acquiring knowledge. Robert Walton is searching for a Northwest Passage. Victor ruined his life after his obsession with learning the secrets of animating an inanimate being. The creature’s sorrow increases the more he learns about himself and his circumstances. He says, “Of what a strange nature is knowledge! It clings to the mind, when it has once seized on it, like a lichen on the rock.” How can acquiring knowledge (and then applying or utilizing it) be both good and bad?
2. Frankenstein is told through several letters and stories within stories. Why do you think Shelley did that? Did you enjoy the switching of narrators, and why or why not? Did hearing the creature’s story from his own point of view make you feel sympathy for him?? Did you feel sympathy for Victor?
3. Do you think Victor should have created a female companion for his creature? Why or why not? Do you think it would have changed the story’s outcome for the better…or worse? (Or maybe he learned his lesson the first time… 🙂
4. Brilliant Victor holds his creature’s life in his hands, but ironically, by the end of the story (and really, by halfway through), their roles have swapped: the creature is in control of Victor’s life! He wreaks havoc on Victor, declaring, “Remember that I have power; you believe yourself miserable, but I can make you so wretched that the light of day will be hateful to you. You are my creator, but I am your master – obey!…Beware; for I am fearless, and therefore powerful…Man, you shall repent of the injuries you inflict.” Did you see or feel this awful irony and connection throughout the story? We see this irony again at the end (spoiler alert!) when Victor dies on Walton’s ship, and the creature appears. He mourns over his creator’s body, never able to be pardoned or forgiven, and vows to then destroy himself. In what other ways are they connected or alike? Which man (Victor or creature) is the “monster” in this story??
5. At one point, Victor Frankenstein says, “Learn from me, if not by my precepts, at least by my example, how dangerous is the acquirement of knowledge and how much happier the man is who believes his native town to be the world, than he who aspires to become greater than his nature will allow.” What is the lesson to be learned here? Will Walton stop his exploring before he and his crew are destroyed, just as Victor and his creature were?
6. Humans cannot survive only on food, water, clothing, and shelter. The creature laments over and over his lack of companionship, love, and happiness: “If any being felt emotions of benevolence towards me, I should return them an hundred and an hundredfold.” But this never happens. What does this whole story say about our desperate need for love and human interaction?
Wow, is that enough to chew on?? There’s just too much to discuss in this juicy story! I’m sure I’ve barely scraped the surface. If you haven’t finished Frankenstein yet, please do – maybe even on Halloween night (muahaha…). It’s a truly heartbreaking and eye-opening story at the same time, don’t you agree? 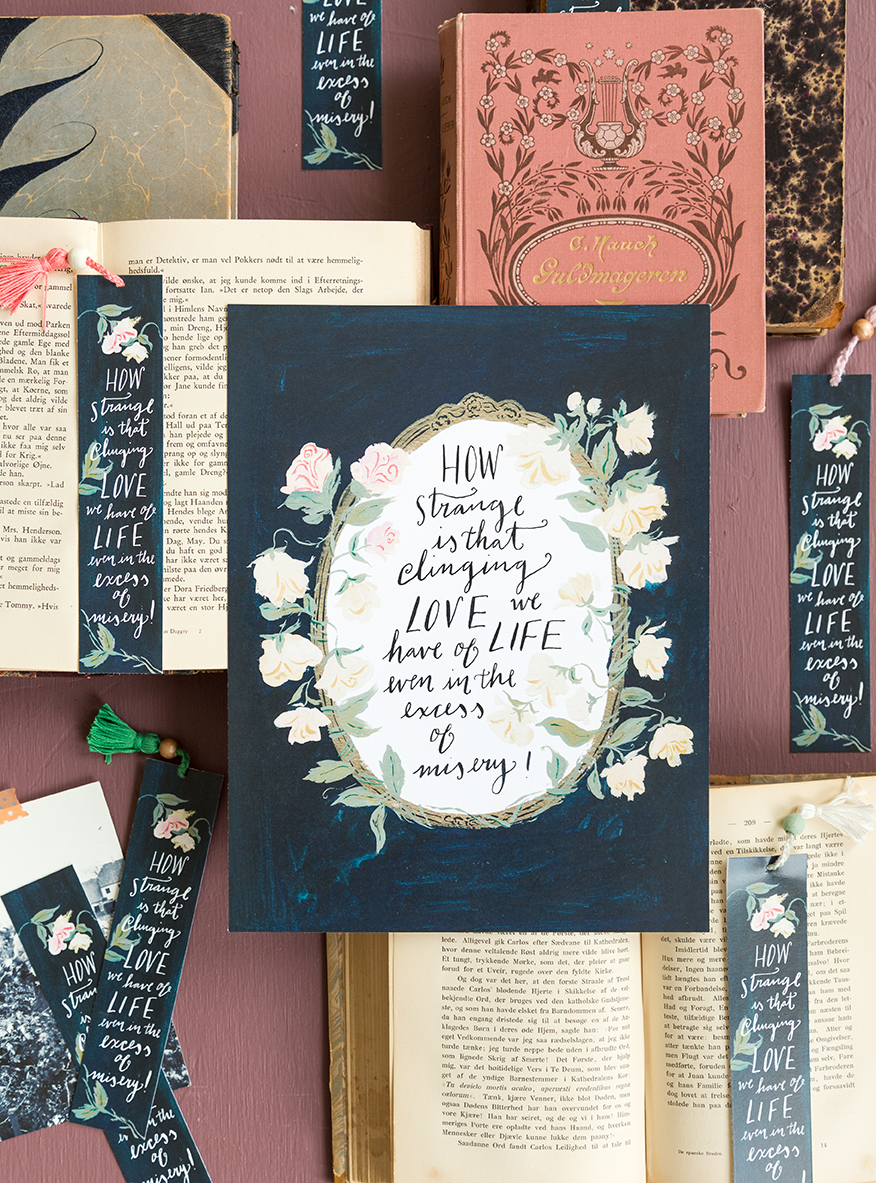 Further reading suggestions: If you’d like to learn more about Mary Shelley and the people in her life, try:
Romantic Outlaws: The Extraordinary Lives of Mary Wollstonecraft and Her Daughter Mary Shelley by Charlotte Gordon
The Monsters: Mary Shelley and the Curse of Frankenstein by Dorothy Hoobler
Young Romantics: The Shelleys, Byron, and other Tangled Lives by Daisy Hay

And if you’d just like another classic, creepy story, try:
The Turn of the Screw by Henry James
The Haunting of Hill House and We Have Always Lived in the Castle both by Shirley Jackson
Dracula by Bram Stoker
(I’m sure there are so many more! Share your favorite creepy story to read this time of year.) 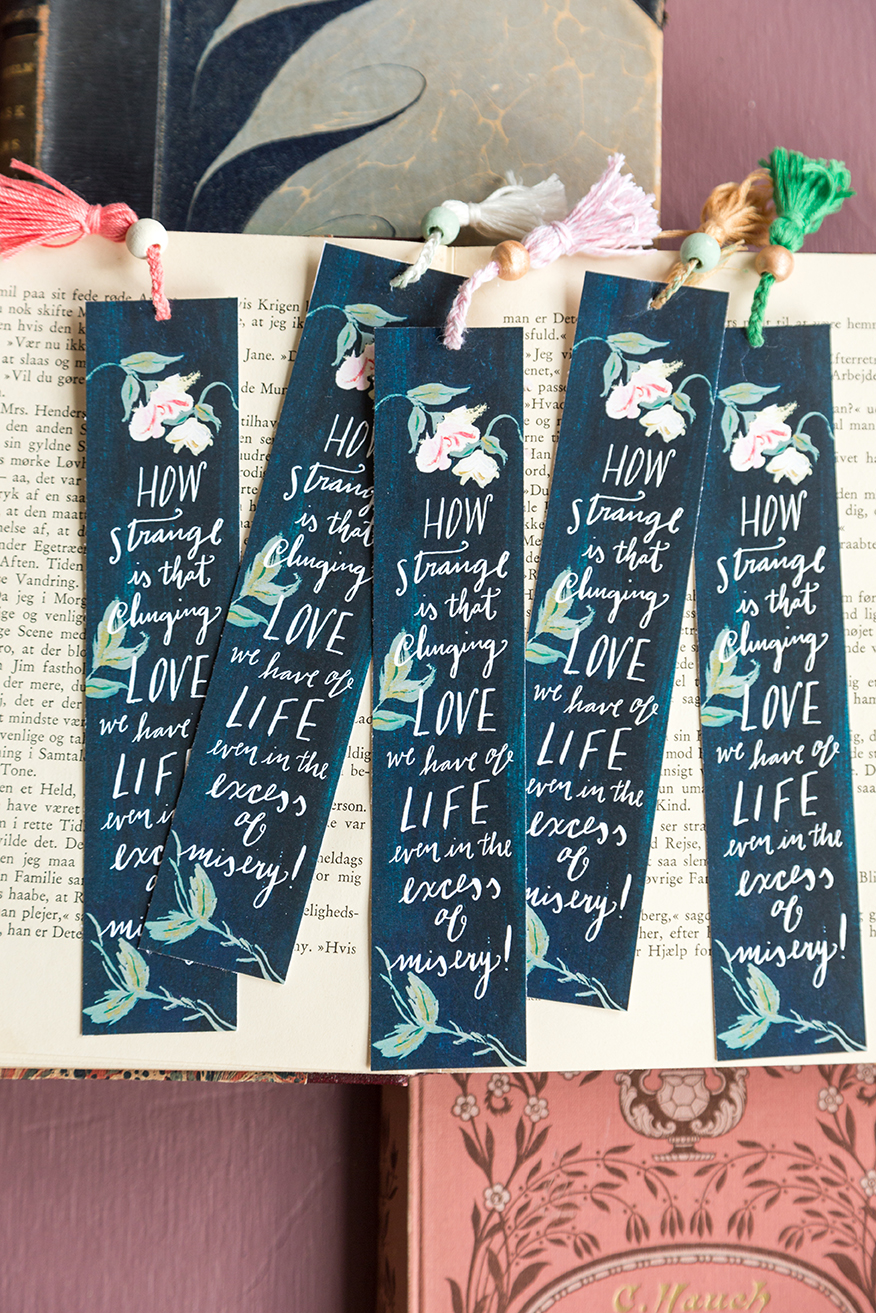 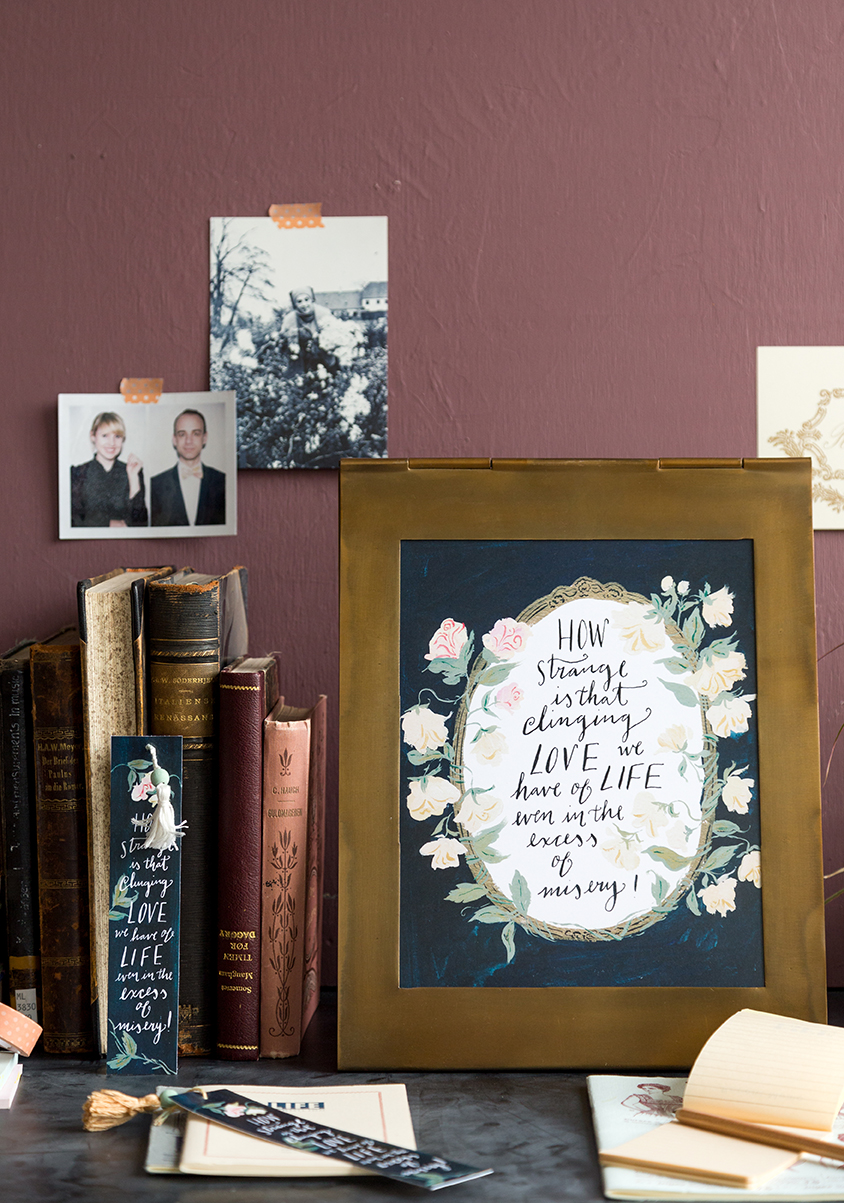 Something Fancy A classic Valentine's day gift and one that will hardly ever disappoint, jewelry is at the top of our list. I'm guessing I'm...
Read more

How to Jumpstart Your Creativity

Our Top Ten Posts Of 2021 I have to admit, it was a fun surprise to see which posts came out on top. 2021 was...
Read more
Arrangements

Paper Poinsettia Wreath If you've been following our tutorials for a while, you might notice that the flowers on this poinsettia wreath look familiar. Right...
Read more
Anti-racism

What is Eeboo? We couldn't tell you about our Eeboo kid's toys without introducing the company's incredible background. First of all, women and mothers run...
Read more
Art

Where the Wild Things Are Family Halloween Costume I just realized that this is our first family Halloween costume we've done with our kids. I...
Read more