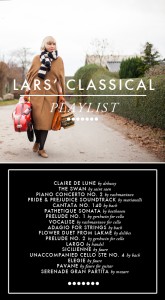 Listen to the playlist by clicking on the image above or clicking here.
Listen to previous playlists here.
photo by Amanda Thomsen

I’ve been thinking about this post for awhile. I started the monthly playlist series because I stink when it comes to expanding my musical repertoire. I rely on other people’s fine taste to broaden my own, otherwise I stick to what I know: classical, oldies, and really bad pop. Ha! Katie Farber of This, That & The Other  has been kind enough to provide some really great tunes every month, but I wanted to try something different this month. Every now and again we need some quiet, peaceful time and music can certainly be a good aid. For us, Sundays tend to be that day where we stick on some calmer music, but I also put it on when I just need to detox. We all need it, right? We’re busy people.

So, I made a playlist with some of my very favorite classical pretty pieces. Not all. But many. It’s not meant as an in-depth list for a hardcore classical lover. I think it might appeal to those who both love classical and those who know nothing about it but want some pretty music for some peaceful downtime.

I grew up playing the cello in orchestras and piano at home (that’s me and Clifford, my cello, above), so each one of these pieces has touched me at some point in my life, whether it be academically or personally. I included some well-known pieces originally meant for other instruments like the two Gerswhin pieces played here on the cello by Yo-Yo ma (a fave of mine). The first prelude is uh-mazing. In fact, I included a lot of cello because, well, the cello is the most beautiful. Totally biased. You’ll notice that I like ’em slow, but I did try and mix them up with a couple of fasties. I kind of want to comment on each one….agh! Maybe I’ll do an “after the jump” so those who are totally disinterested don’t have to suffer.

Let’s see, a few notes about the pieces and playlist below:

Claire de Lune…embarrassed to say that I didn’t really know it until Ocean’s 11. But, I think it’s the best use of classical music in a movie ever. Quirky and magical all at the same time. I love with piano on it’s own and full orchestra. You’ll notice I love me some French composers…

Rachmaninov’s piano concerto no. 2. I die.

Is the soundtrack from Pride and Prejudice the most beautiful in all of cinemas? I think so! This one, The Living Sculptures of Pemberly, is so gorgeous. So longing. I listen to it on repeat.

I love Bach. This one with the chorus, Cantata 140, is almost too much for me sometimes. Too much beauty.

Prelude 1 and 2 for piano by Gershwin but here on cello. I’ve already commented a bit above, but agh! I love them so much. Yo yo, I’d love the sheet music for them but I can’t find it anywhere. Does it exist? Gershwin was the first composer I fell in love with as a child. Rhapsody in Blue. I die.

Vocalise. I love the sad ones, what I can say? This one makes me cry when I play it.

Flower duet. I remember tracking it down when I first watched American President. It was playing in the background of a scene in Annette Benning’s apartment. Again, movies teach me more about classical than my education? What?

Bach’s cello suites are a standard. This one I chose is not one of his most well-known. In fact, I really only like it for the middle part. It’s a a two part dance and I love the second part SO much. It’s so sweet and simple yet so beautiful. If you’re a cellist, it’s all about playing with your thumb. Agh!

Pavane by Faure. This one I played with the Orange County Junior Orchestra on our tour to France and England. I will always remember it that way.

Gran partita by Mozart. LOVE this one. The piercing oboe. I die. Oh, and I LOVE the version of human voices singing it in Bright Star. That was the only good thing about that movie.

In 2011, Loria Stern started attending adult education classes entitled “Medicinal and Edible Plants” where she learned about foraging and the power of plant...
Read more

In 2011, Loria Stern started attending adult education classes entitled “Medicinal and Edible Plants” where she learned about foraging and the power of plant...
Read more
Celebration

We could all use a little more celebration in our lives, and this watermelon round up for National Watermelon Day is a great way...
Read more
A Midsummer Mingle

There's nothing more magical, earthy, and ephemeral than a floral crown and you know I've had my shared of tutorials (see here, here, here)....
Read more
Party

. Does anybody else get the Waitress soundtrack stuck in their head when they think about pie? Just me? In the movie, Jenna is always...
Read more