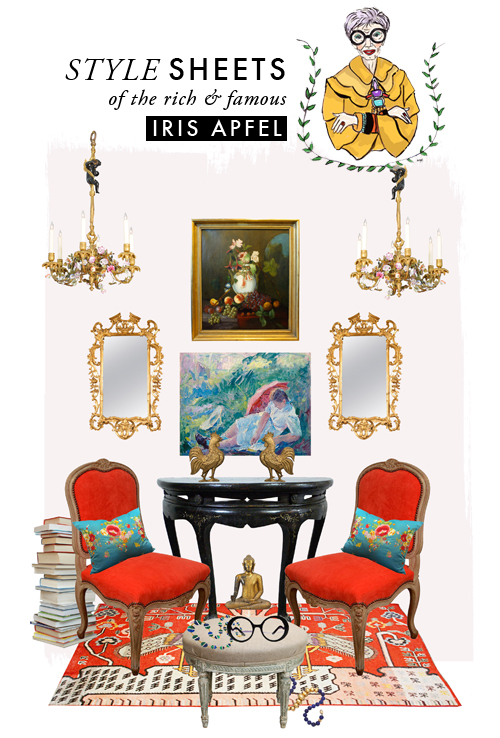 This is the second post in a new collaboration called, Style Sheets. The style sheets are imagined by Jessica Lynn Williams, an interior decorator in Brooklyn (and part of the reason why Kate Spade windows look so fab!), and illustrated by the wonderfully talented Michelle Christensen. Take a look at the first one, Lucille Ball, here.
I think it’s generally agreed that Iris Apfel can do no wrong. She’s called herself the world’s oldest teenager and this spunky spirit comes across in her dress and spirit. Known for her oversized glasses, chunky jewelry, and exotic threads, she’s not afraid to take chances. In the Bill Cunningham documentary, she was interviewed as saying that sometimes Bill would thank her for coming to events so that there was something interesting to shoot. I’ve written about her here, here and even (as close as I could get with the wig selection I had) dressed like her for my costume party last year.
Fun fact: I’m pretty sure we were at the same event a few years ago. It was for Tiffany and Co. and at the time I didn’t know who she was. I tried doing some research on who the lady with the huge glasses was and I found an image online that I thought was close. Pretty sure it was Ms. Iris. Iris, if you’e reading, were you there at the Evening in Style event in October 2009?
Another fun fact: Jessica met her on MONDAY! Gah!
French upholstered stool  | Missoni Necklace  |  Malachite bead necklace  |  Round glasses  |  French gilt chandeliers  |  French still life  |  Reclining girl oil painting  |  English gilt wood frame  |  Lacquered demi-lune table  |  Pair of Louis XV chairs  |  Vintage gold roosters  |  Vintage chinoise pillows  |  buddha  |  Antique pictorial rug
text and style sheet by Jessica Williams
illustration by Michelle Christensen

Pumpkin Decor for Halloween As much as I love the classic carved Jack-O-Lantern tradition, it’s definitely not the only option out there when it comes...
Read more

Pumpkin Decor for Halloween As much as I love the classic carved Jack-O-Lantern tradition, it’s definitely not the only option out there when it comes...
Read more
accessories

Punch Needle Art We’ve been wanting to do a punch needle project for a while now. Then, when our project manager, Jenny, started here at...
Read more
Artist Feature