A cliche tie for Father’s Day 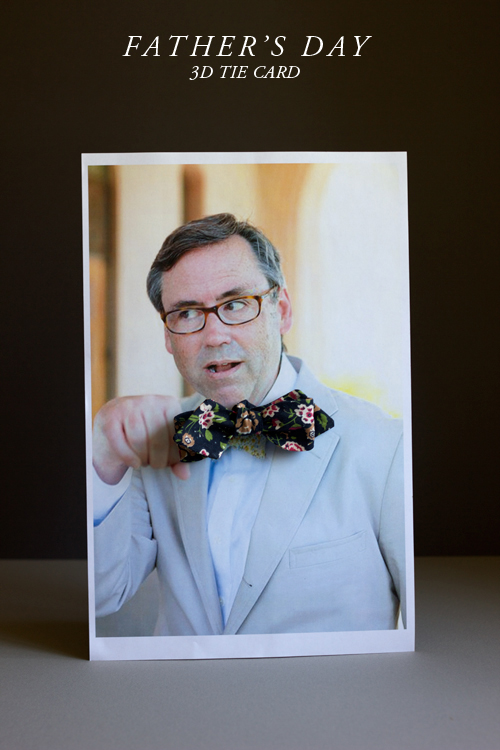 We all do it. The cliche tie for dad for Father’s Day. How can we help ourselves? It’s the only accessory we have to work with! This year I decided to make one rather than buy it–pointed bow tie to be exact. I haven’t yet made a normal straight tie before but it seems a lot harder. Anyone know?

Well, I don’t have a template for the tie I made just this very second–maybe in a few weeks–but I thought there might be more people out there who also got their dad a tie and would like a fun way to give it to him so I came up with this 3D tie poster/card. I’m thinking, ideally it’s set on the kitchen table on Father’s Day as a sweet surprise. Of himself. Don’t dads love pictures of themselves? No? I didn’t even ask permission from my dad, so, ummm, he has not choice. 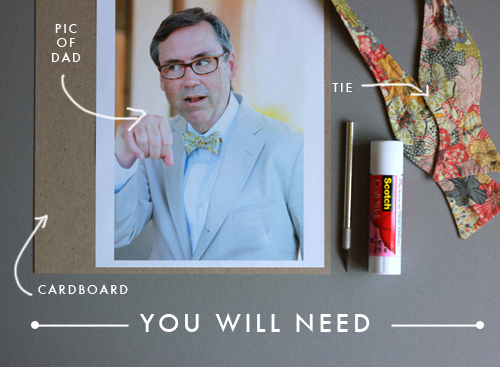 Supplies: cardboard for the backing, picture of your dad (ideally in a suit so the bow tie works), craft knife, glue stick, tie (again, I’ll include a template here in a few weeks)

Step 1: Print off the picture of your dad. I used a picture from my wedding and just blew it up on an 11×17″ piece of paper. And no, I have no idea what he’s doing here with his hand.
Step 2: Glue the picture to your cardboard.
Step 3: With your kraft knife, make two incisions on either side of his neck. Because he was already wearing a bow tie I make them on either side of the bow tie in the middle.
Step 4: Bring the tie through each hole.
Step 5: This is the hardest part. Tie a bow tie. Now, I even looked at various step-by-step tutorials on how to do this and to NO avail. Guys, how do you live?! So, I ended up just tying it like a shoelace. Whatevs.

Happy Father’s Day all you dads (are there any who read???)

And while we’re on a dad kick, check out yesterdays wrapping idea for Father’s Day.

And if you’re wondering, this is my dad, Bob. His alias name is Lars. Yes, I named this blog after him. Growing up, he would put his name in at restaurants as Lars and we would all get a chuckle. The name now lives on forever!

Funky Town Fabric Projects The best thing about the projects we picked to feature our funky town fabrics is that they are all so simple....
Read more

Funky Town Fabric Projects The best thing about the projects we picked to feature our funky town fabrics is that they are all so simple....
Read more
Baby shower

Floral Backdrops from the Archives We love our floral backdrops! This isn't the first time we've dabbled in a floral backdrop. Remember our peonies, hibiscus/tropical...
Read more
accessories

All Our Paper Flower Tutorials

Blooms for Bouquets There are so many things you can do with paper flowers, but you need to make them first! Mix and match these...
Read more
Color

How to make a papier-mâché vase Corrie Beth has been making the most amazing papier-mâché projects for years. We are honestly some of her biggest...
Read more