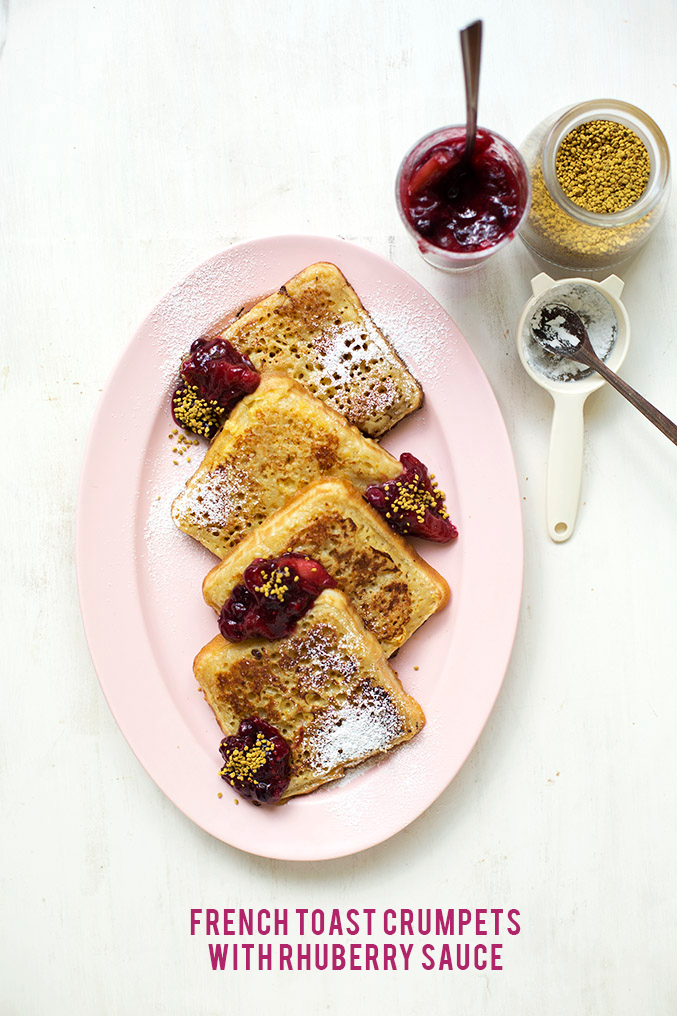 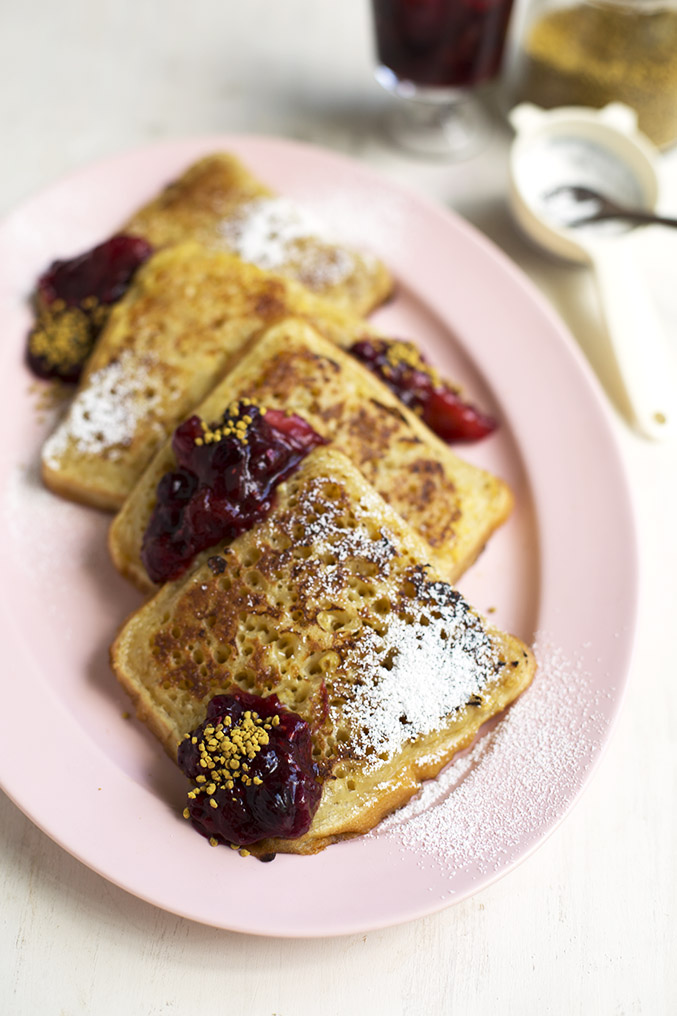 Get ready for brunch heaven, because this is it. Sure you’ve had French toast, but have you ever had a French toast-ed crumpet? It’s an unbelievably good kitchen hack. The crumpets, with their spongy texture, absolutely soak up the French toast batter. When the batter soaked crumpets hit the pan, their edges get ever-so-slightly crisp and the inside stays beautifully custardy, and scented with sweet vanilla.

To go with these heavenly squares I’m taking advantage of the first rhubarb of the year which should be hitting the stores right about now. This is the perfect way to enjoy beautiful new rhubarb, because it’s so simple, and a little goes a long way. I simply throw the stalks, chunkily sliced, into a saucepan with the tiniest splash of water, some sugar, and vanilla and then once the rhubarb is almost tender, stir through a handful of fresh or frozen berries. Simple, delicious, the perfect thing to ward of the end of Winter, and stare hopefully into Summer (or if you’re like me, in the Southern Hemisphere, welcome the END of Summer).

If you’re making these bad boys for brunch then I think one per person is plenty, assuming there will be other things on the table. If you’re making these as a stand alone breakfast, then this is the perfect amount for two. In fact, I tend to think these would be near-perfect midnight, or late night snack territory. There’s just something about eating breakfast foods in the dead of night that feels like a total treat, right? I can’t get enough of it. 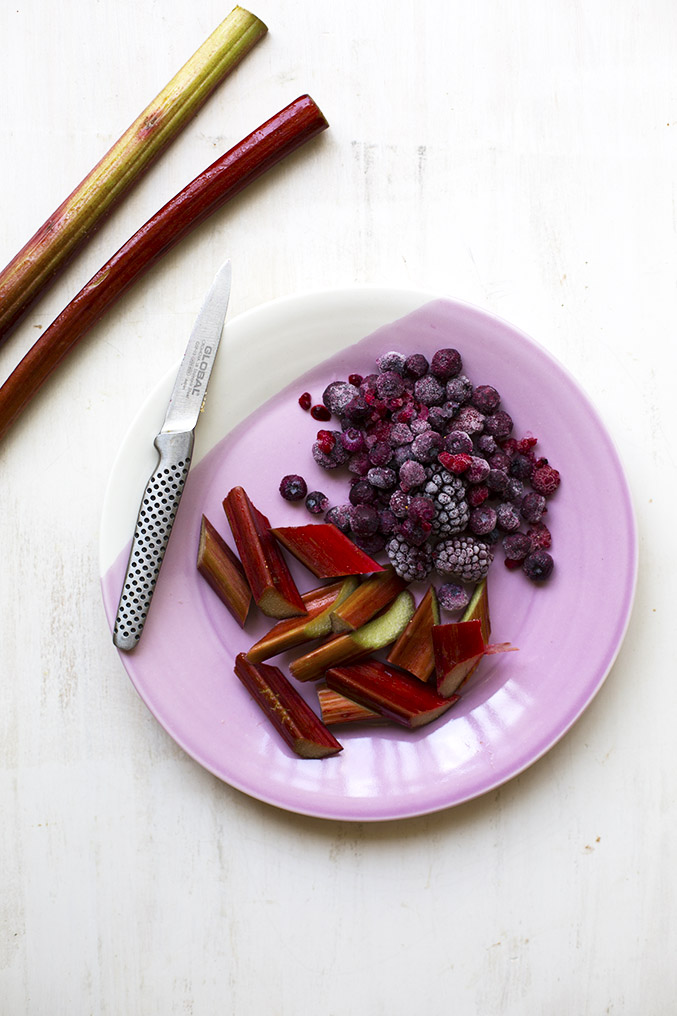 First, make the sauce. Place the rhubarb, water and sugar into a small saucepan and place over a medium-low heat. Stir gently, until the sugar dissolves, and the mixture begins to simmer. Let cook until the rhubarb is just tender, then stir through the vanilla and berries and cook for another minute, until the berries release their juice. Set aside.

In a shallow bowl or pie plate, whisk together the eggs, milk, vanilla and sugar, and then add the crumpets to the bowl. Melt a small amount of butter (about 1 tsp) in a cast iron or heavy-based non- stick pan over a medium heat. Cook the crumpets one or two at a time, until golden brown on each side, and cooked through – about 2 minutes a side.

To serve, top each crumpet with a spoonful of rhuberry sauce, a sprinkle of bee pollen and a dusting of powdered sugar. 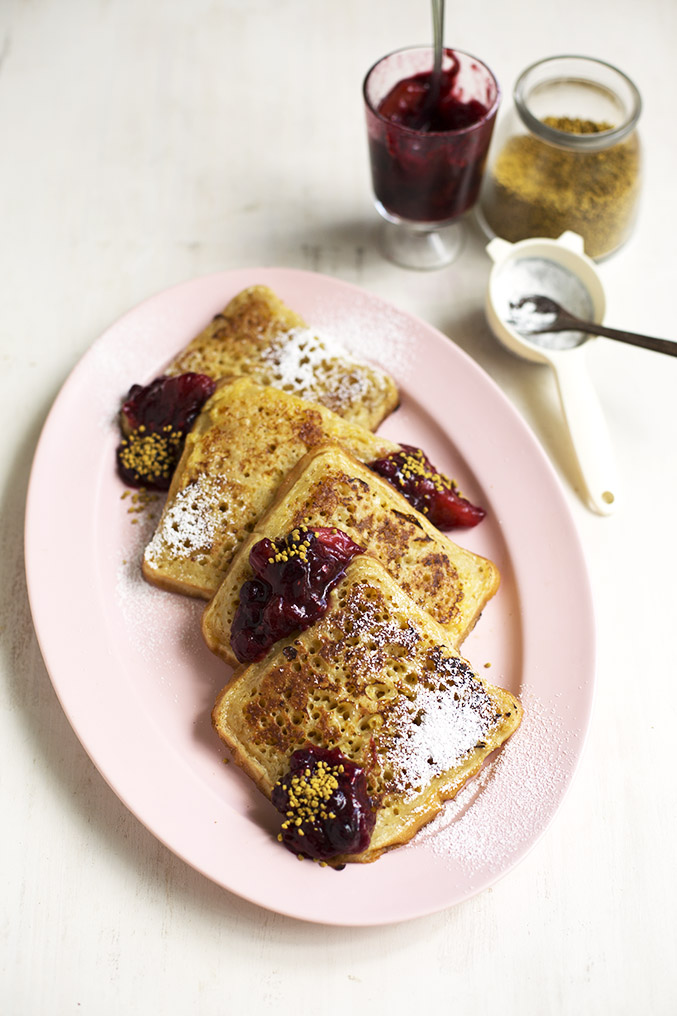