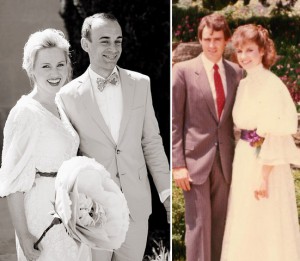 This here on the right is my mother. My mother is “the full package” according to my dad (and I highly concur.) Mom had her wedding dress made by a friend who did costume design for theater in LA. I had never considered adapting the dress for my own until I realized how glum wedding dress shopping is. Enter mom’s great idea to use hers. Genius. Also enter Kimi of Moonpools and Caterpillars fame. Among many things, Kimi is an amazing seamstress and expressed enthusiasm and courage at the notion of transforming this original 80’s wonder to 2010 glory. Kimi, you are a miracle worker even though it was more of a headache than any of us predicted. She took off the high neck, turned the dress around so the row of buttons are in the front, cut out the masses of liners, slimmed it down, deleted the lower bell sleeves, created a v-neck and voilá. I added a braided green belt with white/off white/blush pink flowers much in the same spirit of my mom’s purple sash. I couldn’t have been more pleased!

amusement of the day: Dot, the world’s smallest stop-motion animation character (even smaller than Marcel? How about a duel?) Thanks Carissa!