Should you go to design school? 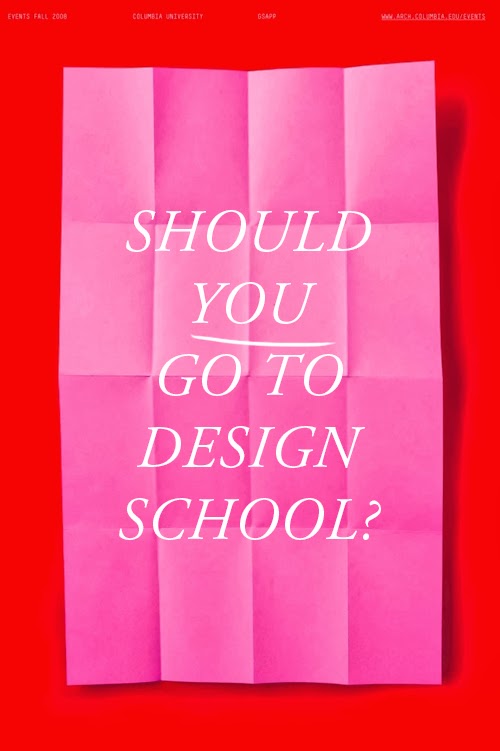 This is a post I’ve been wanting to write for awhile now–Is design school right for you. I’ve been pushing it off because I didn’t want it be solely one opinion, my opinion. I wanted it to be a comprehensive resource for those genuinely thinking of investing their time and money into a formal design education. I collected the thoughts of a few successful creatives who I thought would provide some valuable advice–Joy Cho of Oh Joy, Aimee Miller creative director of Real Simple, Anne Ditmeyer of Pret a Voyager, Merrilee Liddiard of Mer Mag, and Sarah of Sarah Jane Studios–though I know this a conversation we could all have. Please leave your comments about it too so we can represent a number of walks of life.

Joy Cho, graphic designer and blogger of Oh Joy!
“I went to Syracuse University and majored in Communications Designs (which is the same as graphic design) with minor in Textiles and Fibers. I loved school because we got to learn the history and the basics of design before fully emerging ourselves into designing for the real world.
However, I don’t think you have to go to school to be a talented graphic designer as I have many friends who are self-taught and very successful at what they do. I would highly recommend school if you know you want to do design as a career and you can go into college with that plan in mind as school does help you build your skills and your portfolio. But if you are discovering an interest in design later in life or changing careers, I don’t think you always have to go back to school to learn. There are lots of Continuing Education classes available for learning the fundamentals of design and also some of the technical aspects of it, but then you just have to go out there and practice by way of internships, apprenticeships, or on-the-job training.
Talent is talent. And if you have it, you can foster it in many different ways.”

Aimee Miller, creative director of Real Simple
“Yes you should.
That should be the end of it most likely because my husband is a professor at our alma matter Pratt and we have this discussion all the time and are staunchly, radically pro-education. Old school, and obstinately so.
Still, I would never deter anyone from following their dreams, creatively or otherwise and lots of people’s journey’s can take them to fabulous places that look nothing remotely like the inside of classroom, but those souls are blessed with things that most of us are not–and I’m not going to get into that.
It’s just that there is an integrity to art & design specifically that cannot just be free-formed unless you are an amazing autodidactic. And you are going to royally plague the design community with your nifty computer skills but your ignorance to Brodovitch,  Saul Bass, David Carson, Paula Scher, Ruth Ansel, Peter Saville, Jonathan Ives, Josef Hoffman, Herman Miller, Charles & Ray, Charlotte Perriand, Agnes Martin, Josef Albers, Carravagio, Ben Nicholsen, Richard Mangold, Bodoni, Times Roman and Franco Bitossi.  You get my point.
On the flip, and I’m going to use myself as a reference because I know me really well.  I had no other vague interest as a child, tween, teen other than making things, thinking about making things and learning about how I could make what I wanted and make it better.  There’s a problem with that because that leaves little else.  While my intellectual curiosity was up there and my talent was built in–thanks mom–my practical skills and my academic focus was not built in or interested in getting in (putting this kindly to myself).
I safely landed at a great school. Probably the only time putting all the eggs in one basket actually paid off for me.  I excelled but I was also taken into a room by all of my foundation professors and was told that they were not bestowing a specific scholarship/honor that I could have greatly used because I came off as cavalier.  Their word, not mine. So, from then on, I became a student and it wasn’t easy.  And I have never stopped being a student and quite honestly as someone who hires teams of creative resources, I would be (am) highly biased to anyone that didn’t respect the institution of higher education and the intensive study and dedication that is requires.”

Anne Ditmeyer, blogger of Pret a Voyager
I should preface this by saying I technically didn’t go to design school. I studying art history and anthropology (the visual side) in undergraduate (University of Virginia). I never really had the desire to get a Masters, which is kind of ironic, seeing as now I have two (and the student loans to go with it). My first Masters was in Publications Design from the University of Baltimore. I liked this program because classes were nights and weekends so I could work full-time. I was actually interning in graphics at a local theater, and the two fed off each other brilliantly. I also chose this program because it wasn’t a traditional design degree, but more aimed at someone with a liberal arts degree. For me, it was far less daunting. The second Masters was another surprise, but it’s why I’m in Paris. I discovered a Masters in Global Communications at the American University of Paris. I had been working for architects at the time, but was itching to pull my background in anthropology and love of travel into what I do. So the lessons here are 1) school is an incredible way to meet wonderful and talented people. 2) It’s a lot easier to motivate when there are a ton of other classmates in the same boat. 3) School is a great way to help get you where you want to be. (Note: when I did my second Masters, I was older than most. Many people went to graduate school because they didn’t know what else to do after undergrad, so they did a Masters. I feel like any kind of advanced degree is much more productive if you have at least some idea of what you want to do later).
On the flip side, I love online learning. I take advantage of free tutorials, and I pay for great tools tool. I teachInDesign as well as Map Making on Skillshare, and absolutely love it. I’m seriously addicted to all the creative classes, and have learned so much from professionals in the field who I really respect. Most classes are $20, so it’s not a major commitment. However, I am completely guilty of watching class videos, but not actually completing the project myself. Learning by doing is always the best!
So now I have this deep emersion in both online and “traditional” modes of education. Despite the debt, I honestly wouldn’t trade what I’ve learned for anything. I think it’s really important to feed your brain and take classes that excite you. When I had an employer, I was lucky enough to get to attend some continuing education classes at MICA on their dime! All I had to do was ask. But it’s also because of my blend of school, and online learning that I have a unique perspective on the industry and was invited to teach a course called “The Designer/Entrepreneur” at Parsons Paris. If you read my twitter feed or blog, you can pick up a lot of what I tell my students, but it’s still never the same 1-on-1 attention as in a classroom and working towards an actual project. My main advice is to try any opportunity that comes your way, whether it’s a local workshop, attending a lecture at a local university, or signing up for a class that piques your interest. You can definitely make it without a degree, but there are other opportunities that a degree may lend you.

Merrilee Liddiard, illustrator and blogger of Mer Mag
“I think education is absolutely important. Knowing the history of design, what the greats have done in the past, what the greats are doing now and why and what they are referencing, etc. is a huge help in building the foundation of solid design skills. I think learning techniques of good design is crucial, even if you decide to break um, you should know um and know why you are doing it. I think those steeped in knowledge, experience, experimentation, critical reviews, etc. have a better chance becoming a strong designer for the long haul, rather than just a flash in the pan. Trends are fun and easy to jump aboard on but good design chops will carry you through for the long haul.
Sooo then where to get this education? Universities are great but I’d definitely do my research. BYU is incredible. very picky but very good (at least they were when I went there, and I’m sure still are). Design schools are also great for connections. Connections with other students, teachers, and design firms for when you leave school. But of course you can educate yourself and glean from making many friends and professionals online and in the design world. Of course it can be done without the walls of a university but I will say you can get a whole lot of amazing crammed in when going through formal training, so I personally vote for that….IF your school is a good one, rather than just a trade school wanting to pop out students who just crank out subpar websites for a living.
My training was specifically in illustration and BYU was great for that (and major picky. I didn’t get in the first year but reapplied and got in after that). I was neighbors with the designers and we had cross over classes and let me tell you, they didn’t mess around. I looooooved my training and time at BYU. I know for me it absolutely gave me the skills and confidence to take things to the next level. I was always ambitious, even before school, so I know I’d still be working in my field if I hadn’t gone to design/illustration school but in all honesty, I think my work and my world would have been a bit smaller…But who knows…you’ve got gals like Sarah Jane who studied music and is now a very successful textiles designer and illustrator (but then again she did have art training…in Europe I think…she’d be a great one to get that side of things…)
hope this helps..sort a bit of rambling…”