How to make a floral crown: Part 1 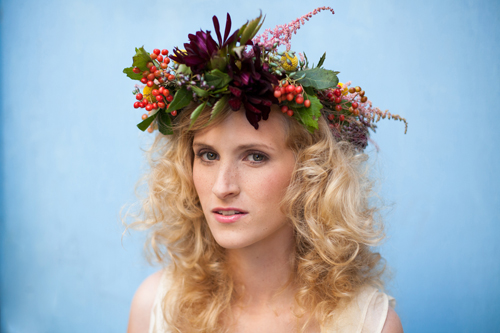 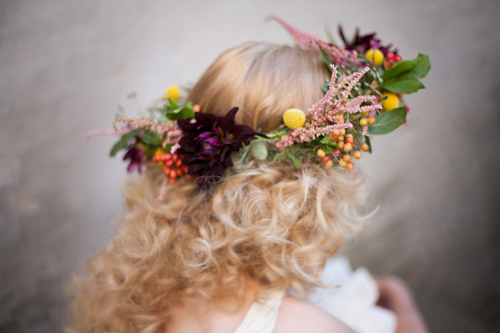 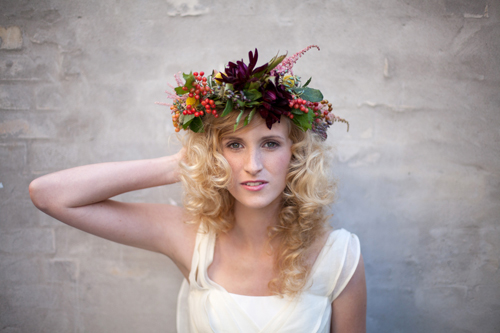 GUYS, look at these! Seriously, this was one of the funnest projects/shoots I’ve done yet! The model, Cecilie, the photographer, Amanda, the flowers! I die. Ok, ok, we’ve seen floral crowns everywhere these days but I just had to try my hand at it. It all started last year when I spotted this painting by Lawrence Alma-Tadema at the Getty. Now, floral crowns are nothing new to the art historical oeuvre, but for some reason this one really struck me. Take a look at the full painting (it’s 179 x 80cm) and now imagine what a scene this could have been IRL. It depicts the Cerealia festival on the Roman streets. I mean, everyone is carrying branches and flowers and wearing them on their heads and playing instruments? This is my kind of town! Nuts! 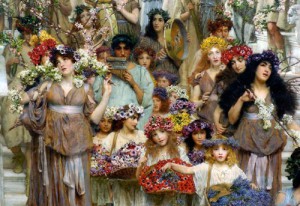 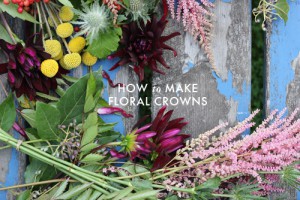 Now, let’s make one ourselves!
Materials: With this version you don’t need anything but flowers! No wire, no glue, no tape, no nothin’. Perhaps just some clippers to clip the flowers down to a nice size. For the base of crown, I’d consider starting with greenery first. The more pliable the greens, the better! Try bending the stem first to make sure it doesn’t crack. If it does, consider using something else. For this floral crown I used black dahlias, tidsel (the greenery for the base), astilbe (the pink), craspedia (the yellow balls), and virburnum berries (the turquoise and purple) 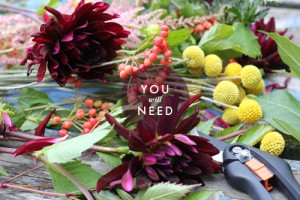 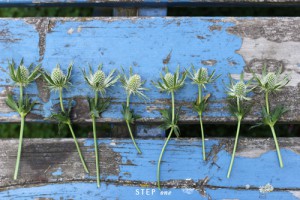 Step 1: Cut and line up the first round of lowers for the base of your crown. Ideally, the stems should be 5-9″ long each. You can cut them down but it’s harder to work with shorter stems. I suggest using greenery first and then adding the colors into it. 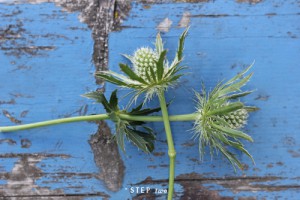 Step 2: Lay one stem perpendicular on top of another. 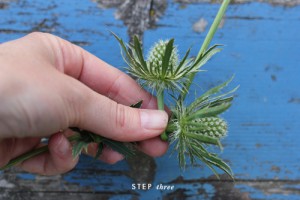 Step 3: Bend the stem under. 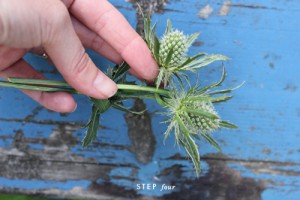 Step 4: Bring the stem up to the top and then press it down so it lays next to the first. 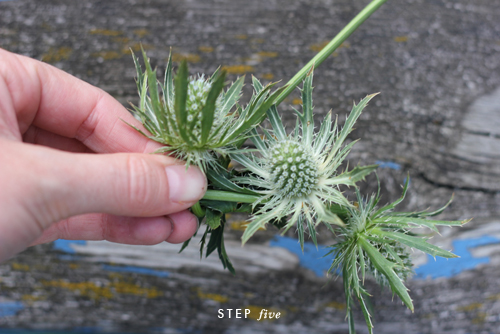 Step 5: While holding the two stems in place with your left hand, place another stem on top and bend it under. 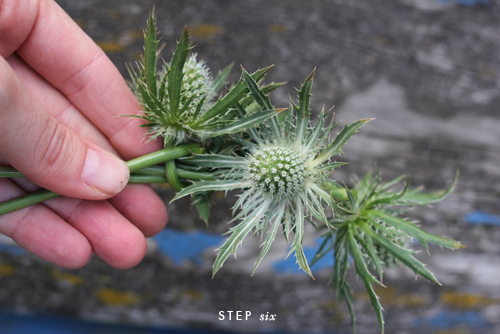 Step 6: Bring the stem up again and then place it parallel with the others. 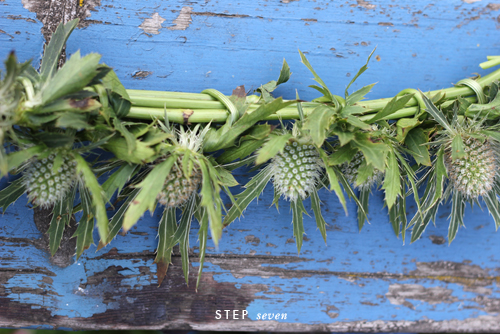 Step 7: Repeat the process until it’s the size of the circumference of the head. I added some different greenery into the middle to create more of a focal point when it’s worn. 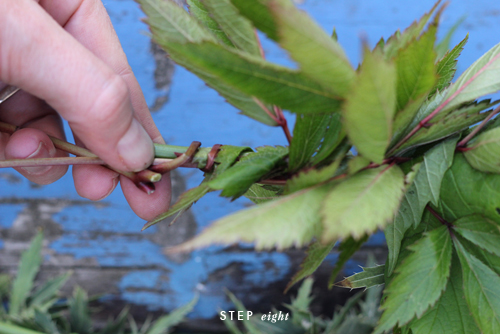 Step 8: When you get to the end, wrap the last stem tightly around the others to secure them in place, making sure that it doesn’t break. 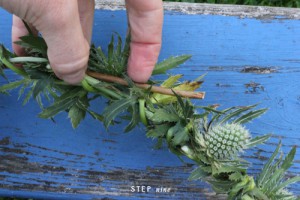 Step 9: To finish off the circle, weave the last stems into the beginning of the crown by tucking them in. 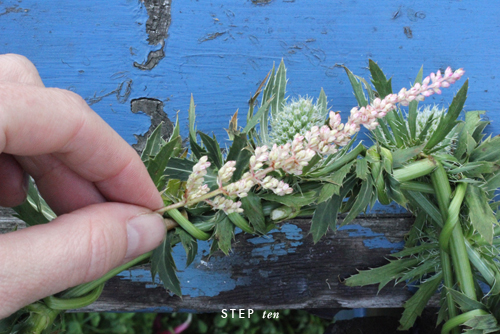 Step 10: Now you can start adding in other flowers. I added longer pieces first so that the shorter flowers can be seen on top. 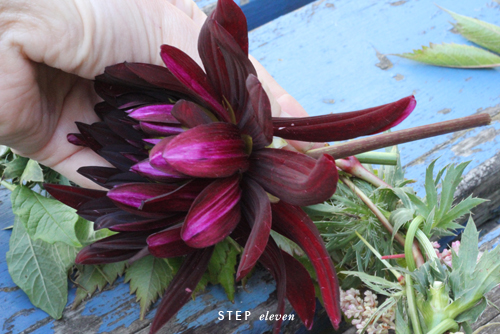 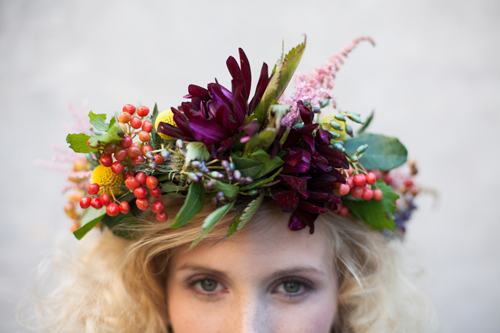 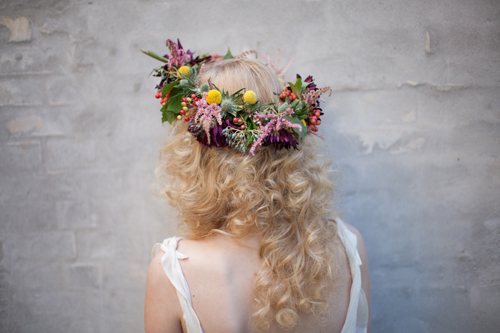 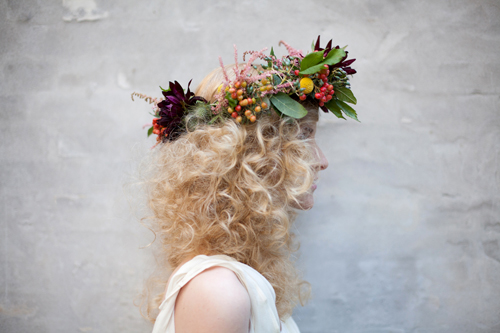 There are so many variations to this version, so feel free to experiment (I’ll be showing you a simple kids version soon!). You can switch off flowers for the base of the crown instead of adding the flowers at the end or you can keep it simple and just use one variety. WARNING: after this you’ll want to crown every flower you see. And yes, that’s a verb now.
This project was made for the Etsy Weddings blog (SUCH a good resource)
Thank you Amanda Thomsen for the lovely photos! And thank you Cecilie for modeling!
Thank you Anja from Elefteria for the beautiful dresses!
And lastly, thank you Lenore Rosendal for hair/make up!