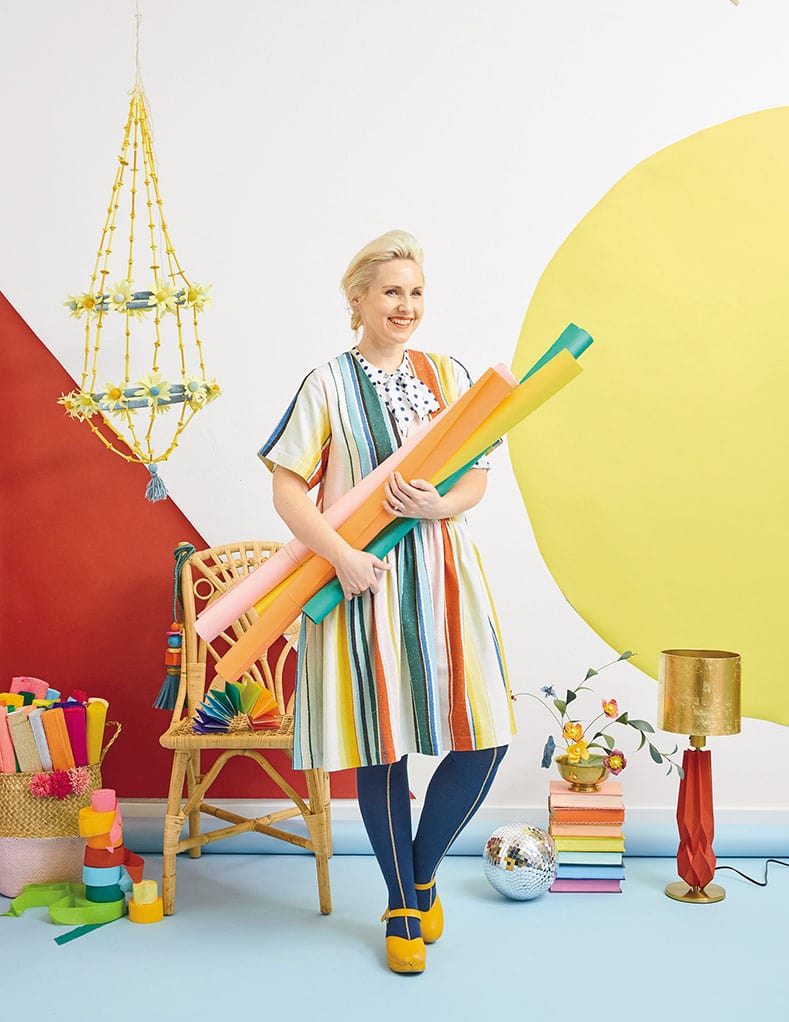 As I’ve been mentioning on the Grams and stories, we’ve been pretty excited to celebrate National Craft Month this year. While it might seem like another silly holiday to celebrate (National Pick Your Nose Day anyone? Sadly, we do have that on our calendar and we WILL be doing something about it ;). Why? The more and more we work on Lars as a team, the tighter our mission becomes and the more we realize that celebrating crafts or rather, the handmade, is important. It’s a topic I’ve been wanting to expand upon for awhile now (I wrote about some of it here) and I couldn’t think of a better time to do so.

It all became much more relevant when our writing intern, Rachel, found the book Craftfulness, which we then selected as our book club book for this month. It’s a perfect fit! In fact, it was the book I’ve been thinking about writing for the last couple of years, but didn’t know existed (it was published just one year ago, so I guess that’s fair!). I’ll be writing more about the importance of crafting and making things with your hands, but first, I wanted to write about my journey to the handmade and how I’ve felt called to do so.

Yes, I know “called” is such a hot word right now and with all this self-motivation, “go live your dreams” time we’re living in, I would prefer to call it something different, but now that I’ve had quite a few years of seeing things in hindsight, I can’t call it anything else.

I’ve addressed it a number of times at lectures I’ve given or conferences, but I realized I hadn’t discussed it outright here on the blog when I received this message: 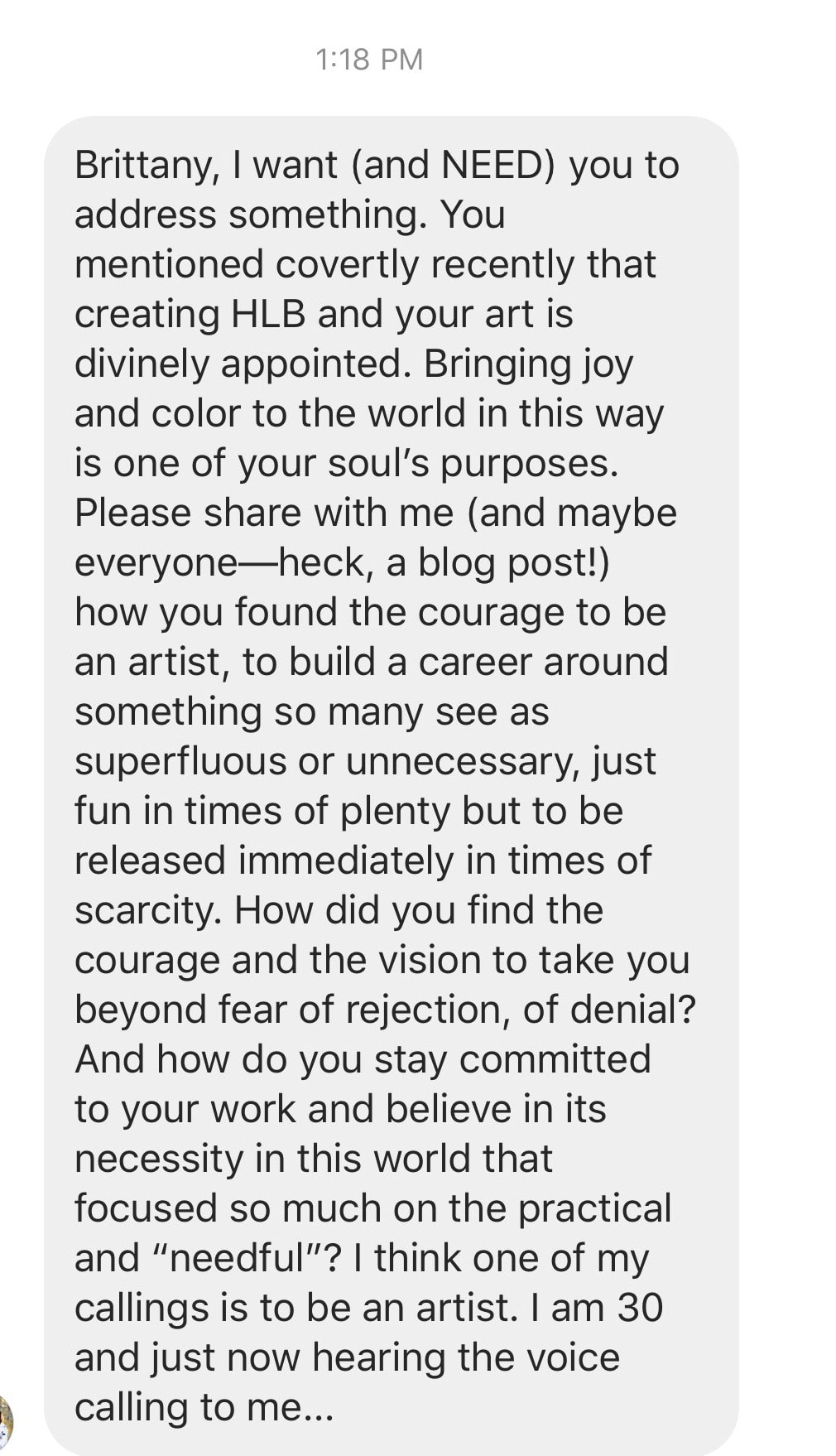 Fair enough 🙂 I will try to do just that!

The history of Lars

I was pursuing a master’s degree in interior design and started The House That Lars Built on Blogspot.com for a residential design class. The project first started when I created a fictitious family for the house I was designing. I named the dad Lars and then the story just kind of spilled out from there pretty naturally (you can read more about that here). I didn’t overthink it because well, I never intended it to become anything other than a school project. Once the class was over, I kept it up as a receptacle for my school work, a visual portfolio if you will, and would offer it as a resources for potential internships and future employers.

Studying and living in Denmark

The following year I studied textile design in Copenhagen, Denmark where, yes, I met Paul, who is now my husband. We got married in 2010 and my mom, sister, and I created a craftacular wedding made up of oversized paper flowers. You can see some of the pictures here. Mind you, this was before Pinterest and Instagram and all that jazz, but people started to come to Lars and request tutorials from the wedding. At that point I was living in Copenhagen with Paul and I couldn’t get a job while awaiting my immigration status so I had plenty of time to oblige. It kept me busy at a time when I could have just remained with my back to the radiator all winter, which I also did. 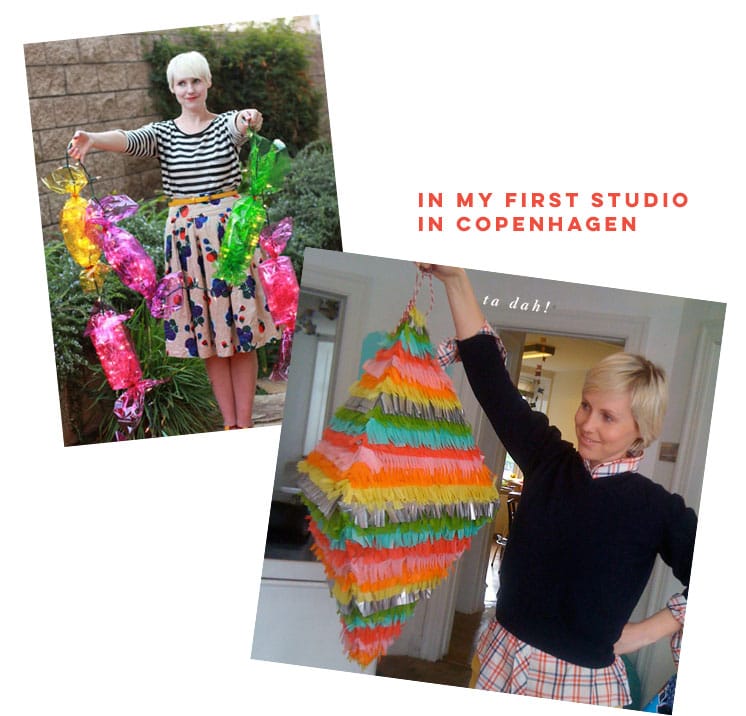 Before moving abroad, my dream was to work for Martha Stewart and lead the city life. I had gotten a taste of the Big Apple during my internships and I LOVED IT. Everything about it (besides being so poor!). I had built a good network when I lived in both Washington, DC and NYC but I lost it all once I moved to Denmark (as well as friends and community, etc–It was a tough time!) But that’s a pity story for another day.

I hadn’t ever thought of pursuing DIY or crafts professionally because…well, I was now a trained interior designer and really, besides Martha, it didn’t really exist in the way that it does today with anyone being able to take their own stab at. Had I known what I know now, I would have dug in deep then so I could have spared a few years of standstill. 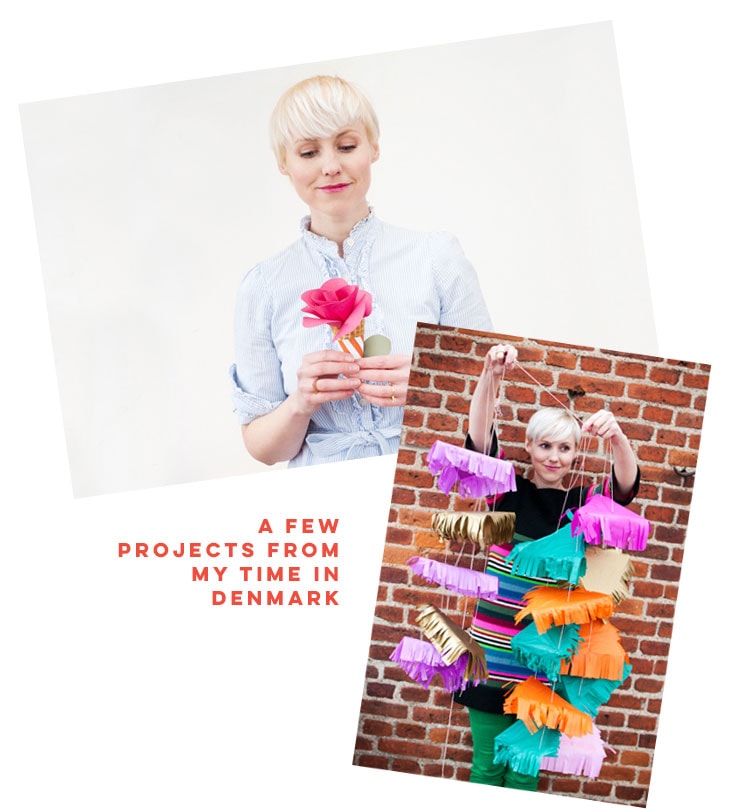 While I was in Copenhagen I read all the great design magazines and noticed that they included the direct phone numbers to all the editors. Cha ching! I started calling them up and asking if they needed any help. No, of course they didn’t need a newly graduated American interior designer, they said! They have the best designers in the world, silly! But, I was pretty fearless and reached out cold to anyone whose contact I could find in any design capacity. I identified designers whose work I liked and emailed them. I met ONE friend this way but she was wonderful and took me to Formland, Denmark’s annual gift fair every year that I lived there so we can stake out the latest design trends. Through her I also assisted on a few photoshoots and she hired me to make props.

My work in Denmark eventually led me to working more on The House That Lars Built due to ummm, lack of things to do. And I knew that this time would probably never happen again in my life so I treated it as a special time to dig into Lars. Eventually, I got a studio (read more about it here and check out my pixie–ha!) in downtown Copenhagen with a few photographers who are wonderful and I love them so much. I started writing for a few other blogs and websites as a craft contributor and writer and learned a lot (you can read about some of it here). Yet, I still didn’t identify as a crafter or DIYer. It was just something to do in the mean time. 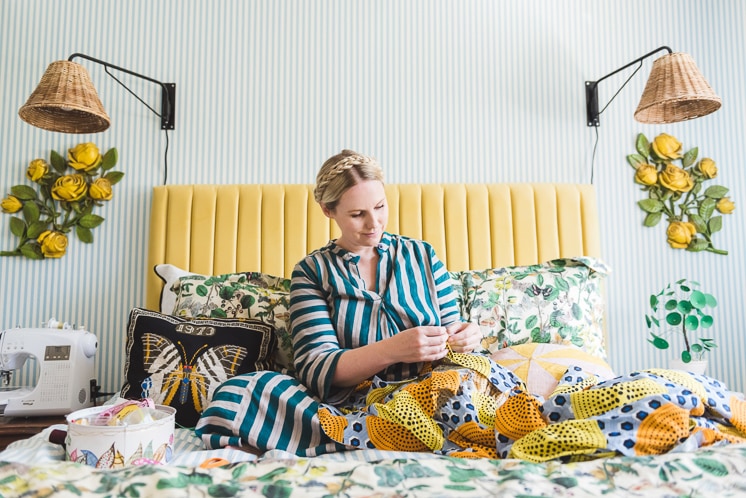 Paul and I decided to move back to the US, Provo, Utah in particular, where he would go to school and I would provide for our family. I suspected my time with Lars was probably going to come to an end soon. I started putting in applications EVERYWHERE and you know what?! I received a job offer within 2 days of arrival! At a company that I thought was going to be a great fit!

They sent me the salary and it was extremely low, but I was willing to work with it after a little negotiating. Instead, I never heard from them again.

Truly! To this day I don’t know what happened. I mean, I’m kind of left to think that they weren’t used to women negotiating for a higher salary, but I guess I’ll never know.

And you know what the weird thing is? This happened to me TWO more times. I would receive a job offer with a salary and then never hear from them again. Well, the second one I did 6 months later, but yeah, not a helpful road to employment.

But it was for a reason

ANYWAY, all throughout this job hunting I kept on working on Lars and started getting paid for this and that and then more of this and more of that. I was hustling to get jobs and people were responding positively to the projects I was putting out into the world. Again, I was pretty fearless about reaching out and not afraid to put in the overtime (Paul might say that’s all I did). After a couple of years it took my dad coming to me and saying “It looks like things are working out for you” to make me realize, “Oh, I think you’re right. Maybe I should stop looking for a full time job.” I mean, at one point I was applying for banking jobs. HAHAHAHAHAHA! Could you imagine? What a nightmare they would have been in for!

Cut to a few years ago when I was sitting in a blogging conference for women of my faith (I belong to The Church of Jesus Christ of Latter-day Saints. We have been known as “Mormon”) and I came across this scripture:

For Zion must increase in beauty, and in holiness; her borders must be enlarged; her stakes must be strengthened; yea, verily I say unto you, Zion must arise and put on her beautiful garments.

I received a profound impression that day that this is what I am supposed to do and how I’m supposed to spend my time right now. And I take it quite literally, to increase the beauty around me through teaching people how to do that in their own lives. The way has been paved to make that happen for me, though I didn’t always understand why–from not getting jobs for who knows what reason to people coming into my life to help me accomplish this goal (I owe a lot of this to my business partner, Mary who came on board 5 years ago), and now a team who shares this vision with me.

This mission does not come without its share of struggles and challenges of course, but it does keep me focused when I question why I should keep on doing what I’m doing even when I…don’t get paid enough…or I could get paid so much more if I went and got a job somewhere else or…the list goes on and on (and it’s now always about money 😉

As you can see, my journey to making a life from crafting/making is a bit different than most because I was hustling to make ANY sort of living for our family. And then the making, the handmaking rather, became the avenue by which to accomplish it. It came naturally to me and people, you, responded well to it, otherwise I wouldn’t be here today. And now that I’ve been in it professionally for about 11 years, (or about 5 if we could the time I came to terms with it!) I’ve learned a lot about it.

There’s more to this story and I will be sharing it next week in part 2. Stay tuned!

Top photo by Chaunte Vaughn from Craft the Rainbow

Sewing Basics: How to Read a Pattern

30 Minute Pencil Case I’m not exaggerating when I say this pencil case is super quick to make. Seriously, it took me 30 minutes to...
Read more
blogging

Wedding Book Inspired by Blooms As many of you know, we debuted our first Casetify collection last fall. Then, come spring, we came out with...
Read more
Celebration