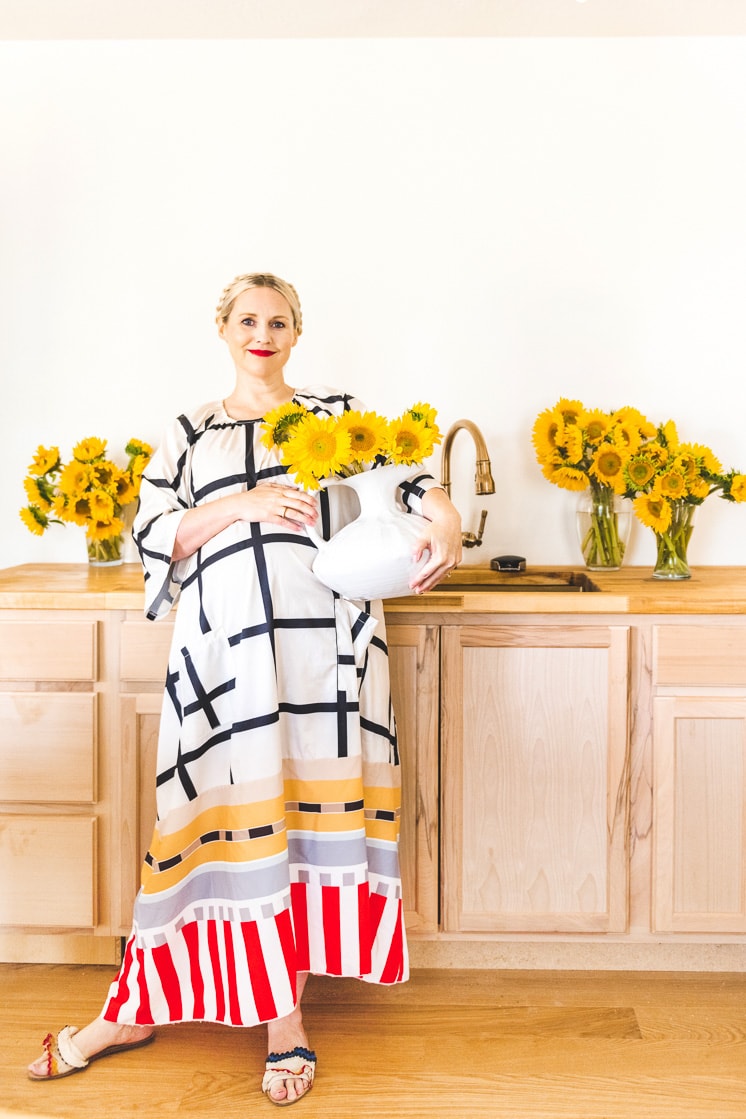 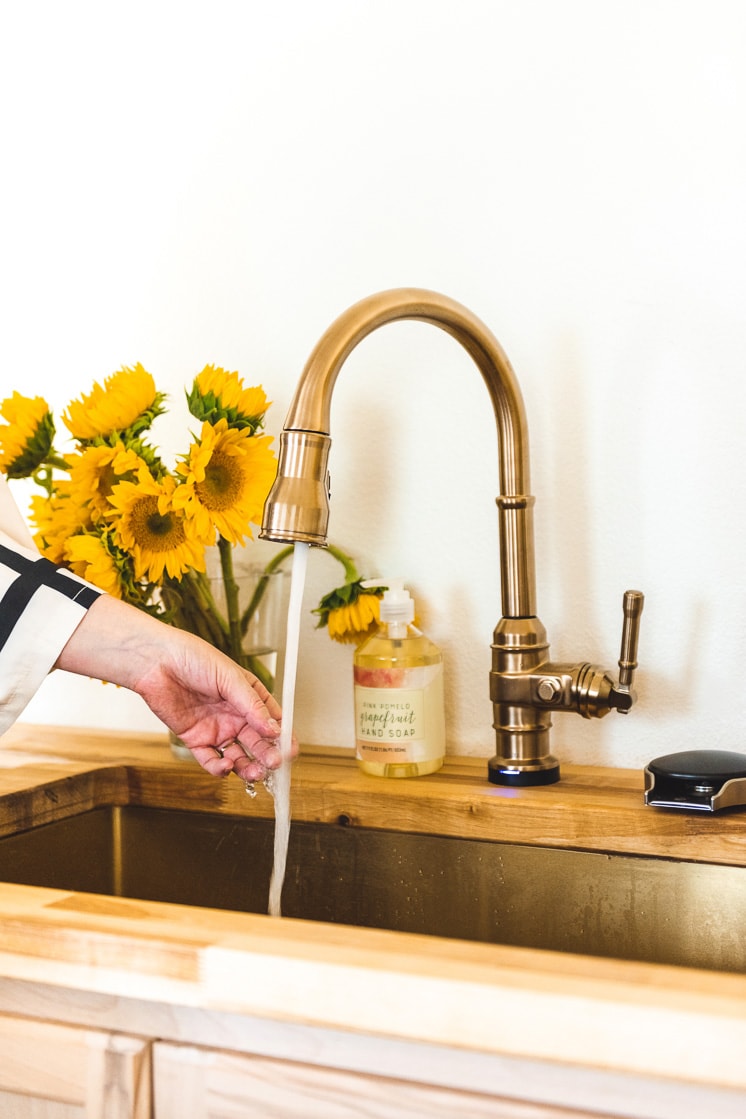 The House That Lars Bought: Our Kitchen Remodel Update!

After 3 months of absolute insanity with a home renovation, being pregnant, and coming out with our Great Artists! course in the age of COVID, we spent the first weekend in our new house! I think I’d feel a tad more excitement if everything wasn’t covered in sawdust and I could find my hair brush, but here we are. That said, there have been a few bright spots in all the mess. Enter, my new faucet and Glass Rinser from Delta Faucet as shown by my adorable son.

I do not exaggerate, this faucet has been a symbol of hope for me during these lock down months. Originally, we were going to install this faucet and Glass Rinser in the studio, but we put a lot of projects on hold.  When we bought the house in June I thought, “no big deal, we’ll put it in the new house”. I thought that would take 3 weeks. After delays of this and that, I continued dreaming of the new faucet. It became my literal golden beacon that was always just a bit out of reach. Well, three months later and it’s in! We literally just got it installed on Thursday just in time to move in! 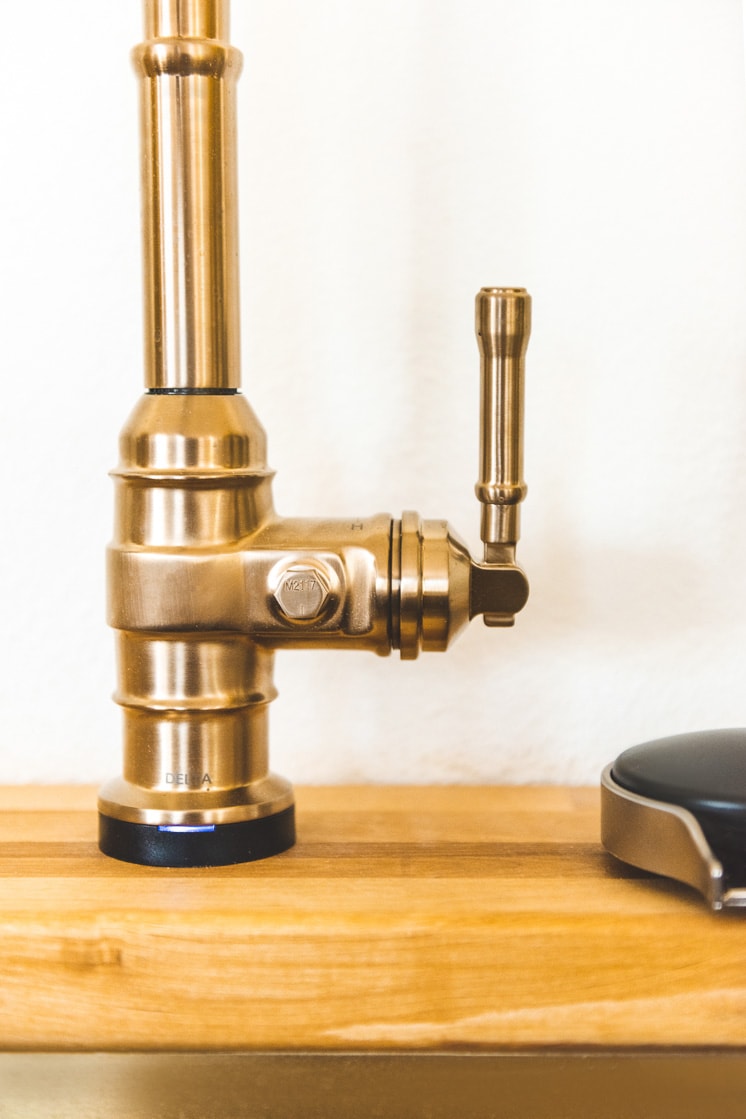 We planned the kitchen to be a phase 1 renovation: installing inexpensive unfinished cabinets without the wall cabinets to make room for open shelving in the coming weeks. Add to that a butcher block countertop that is always in stock at the home improvement store–quick and easy. Lastly, we put two islands together from Ikea to provide a lot of countertop space and fill the elongated room well. The idea was to go for speed and economy so we could move in as quickly as possible. 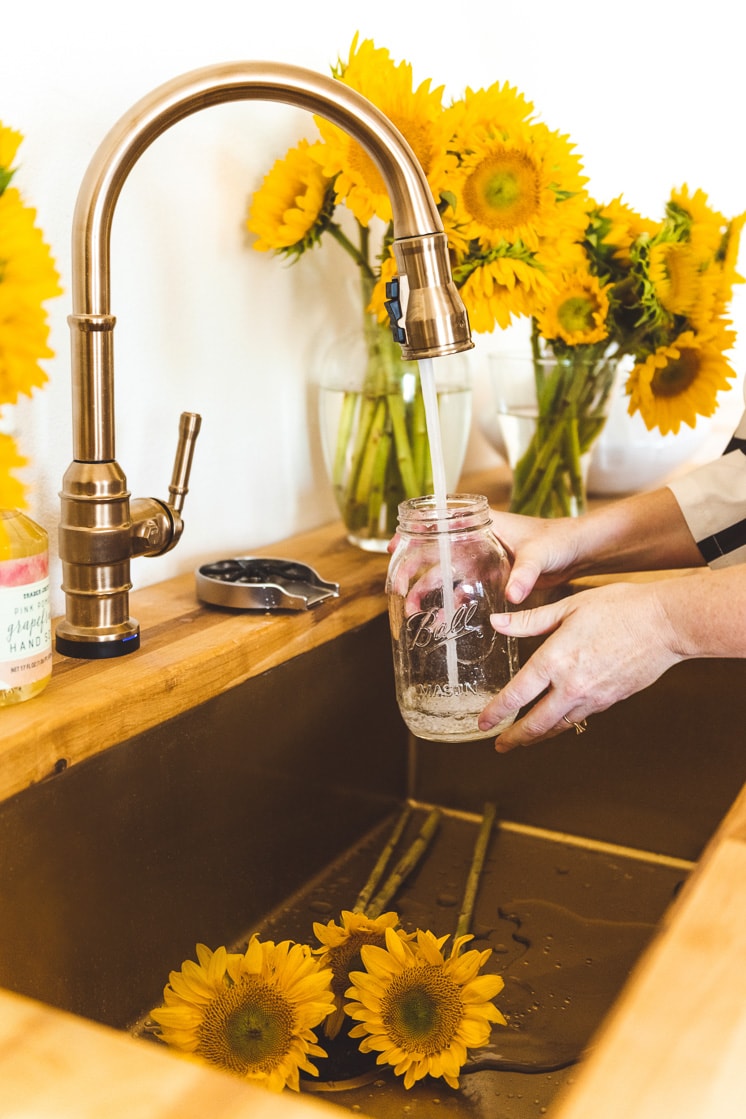 However, something I don’t mess with is the jewelry of the kitchen, aka the faucet and sink. You don’t want to skimp on these items especially since they can be taken with you with each renovation. I had selected the Broderick™ Pull Down Kitchen Faucet with Touch2O® Technology in Champagne Bronze. I chose it because it feels a bit fancy but still with a touch of industrial so you get the sophistication without the fussiness. 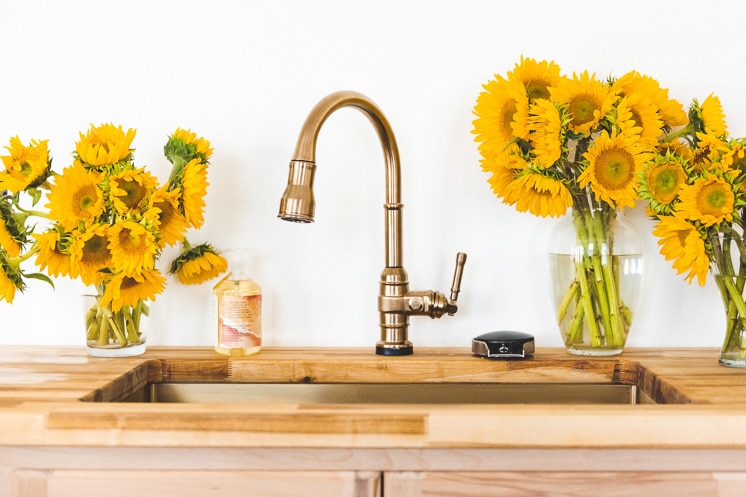 I hadn’t anticipated how much I’d love the touch on touch off feature, which allows you to touch the spout or handle anywhere with just one tap, which is great for messy hands. Or great for say, someone like my two-year-old who he finds great entertainment in just touching it on and off and on and off on repeat (see video!)

Another bonus feature is the TempSense™ LED light changes color to alert you to the water’s temperature so, once again, if you’re washing your little one’s hands, you can know when it’s hot, cold, or juuuuust right. I mean, it’s only been 5 days, but I’m already seeing the perks. 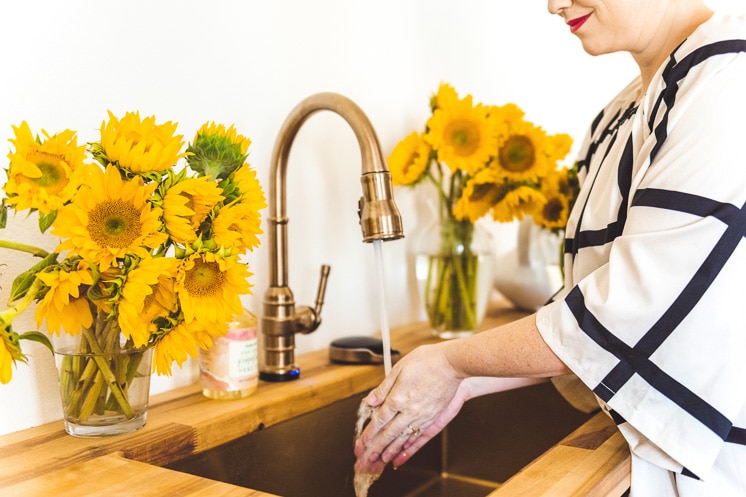 We had picked out a gold sink to go with the faucet and I was hoping and praying that the two gold finishes would work and dum, du du dum….success! A gold stainless steel sink AND a faucet? I’m feeling all shades of Midas. But the real fancy moment comes to us in the shape of a glass rinser. What’s a glass rinser you ask? You know when you try and clean your water bottle and you just soak it for days? (anyone else or just me?) Well, a glass rinser shoots water up to give it a nice scrubbing. It’s dreamy. Plus this cover keeps it clean and sleek! And I can’t believe I have one. I’ve been finding it useful for Jasper’s bottles and jars where who knows what got into it. 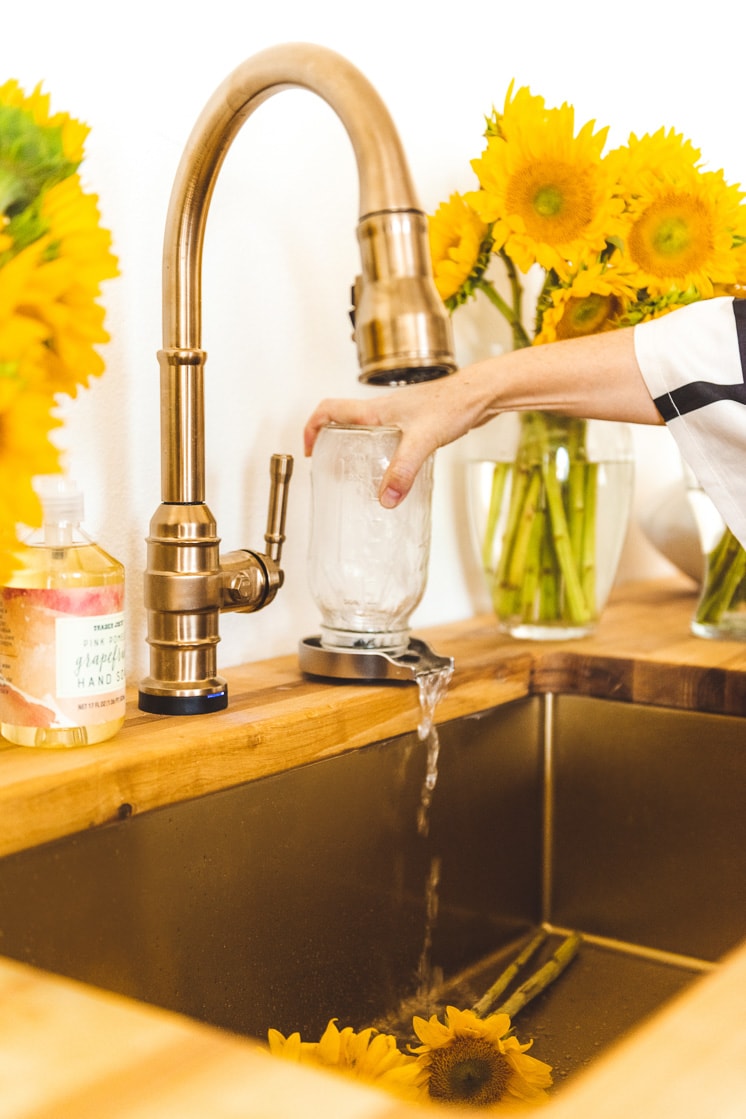 Now, I haven’t made too many other decisions in the kitchen and I’d love your feedback on what to do.

But first! I want to show you the process of how we got here, even though I’m completely aware that it’s not quite finished.

Now, onto what we need to do. First, the unfinished cabinets. There are currently an endless amount of wood finishes going on and it’s rather distracting. I definitely want to paint the cabinets a color…but which one? 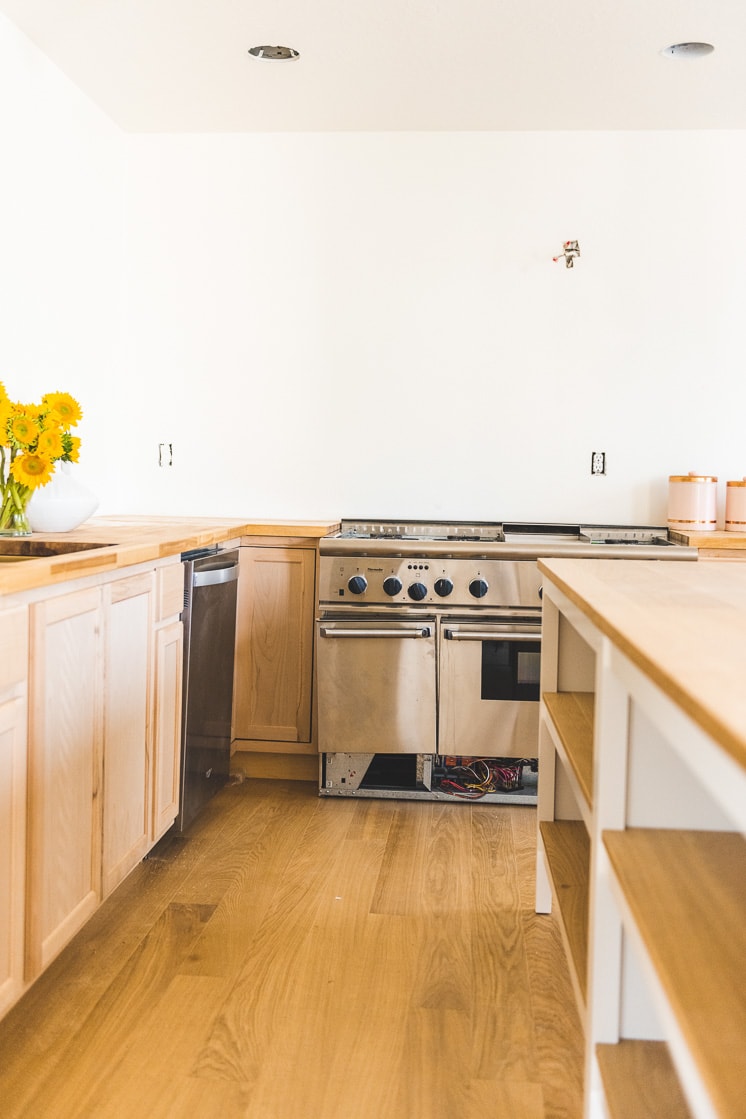 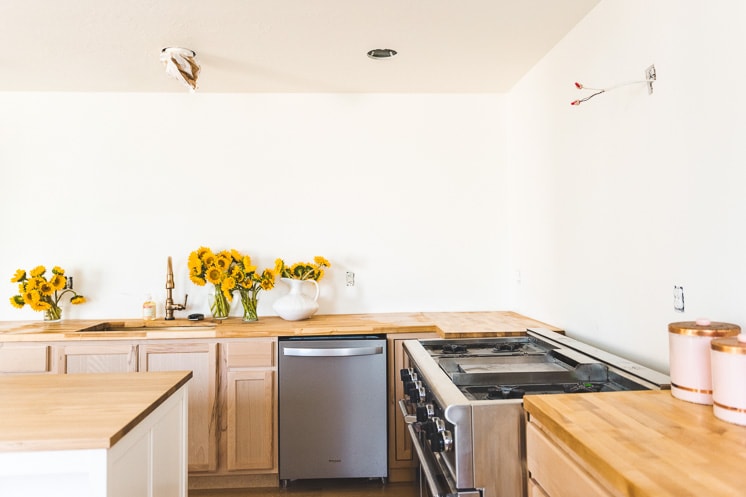 And I wasn’t going to do a back splash for now until we really figure out what permanent cabinets to put in, but I think I might feel a tad more calm if I feel like there’s some sort of water coverage going on on the walls. I’ve been talking to my friend, Meta, who is an amazing interior designer, and she’s really getting me into the idea of doing a cheap tile for now but maybe trying out something with a fun colored grout. I don’t know…could be fun! 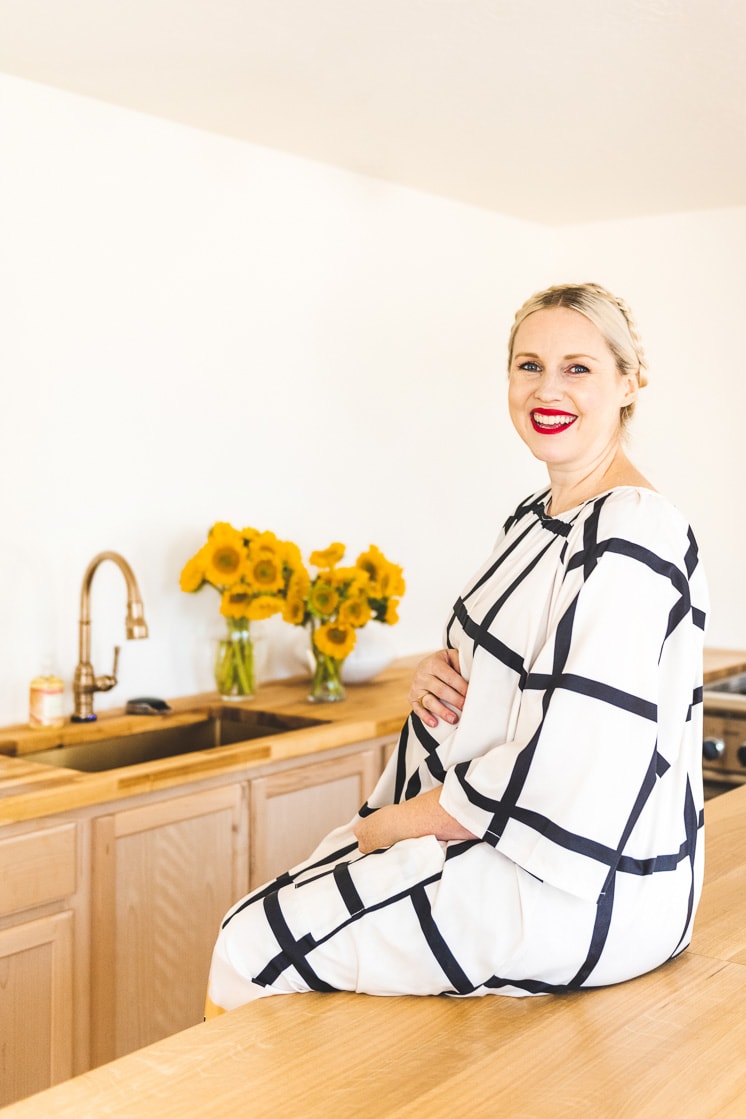 As for upper shelving. Honestly, I’m not the biggest fan of open shelving. To me it seems like a great option for people who love to spend a lot of time cleaning. And that is just not me at all. And then you have to worry about everything matching all the time. Feeling the need to be all Pinterest-worthy all the time, even for this blogger, is too much pressure! I need to be able to hide stuff you know?! 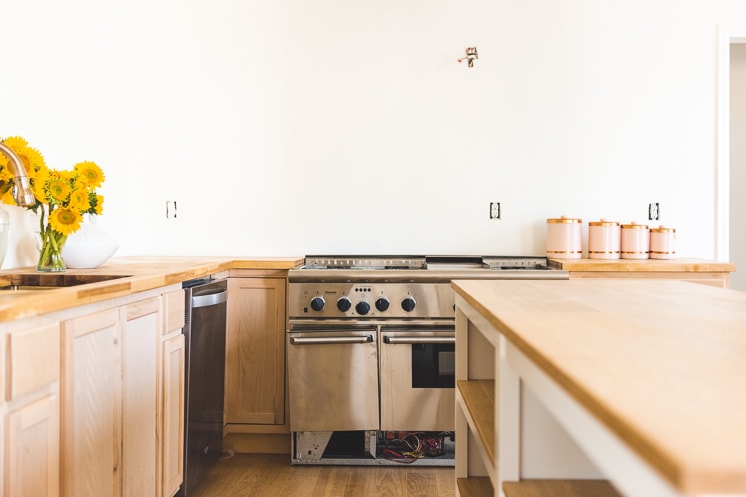 That leads me to the range. The previous owners had bought a 4’ range and fridge that they had never installed (they almost didn’t let us keep them, but I think they realized how difficult they are to move so they decided to let them go after all). And yes, they were a pain in the bum to install, but that’s a story for another time that involves Paul moving the 550 pound range on his own at midnight last week. Anywhoo, do we put up a vent or do we get something new and less commercial looking? So many questions that I’d love your feedback on. 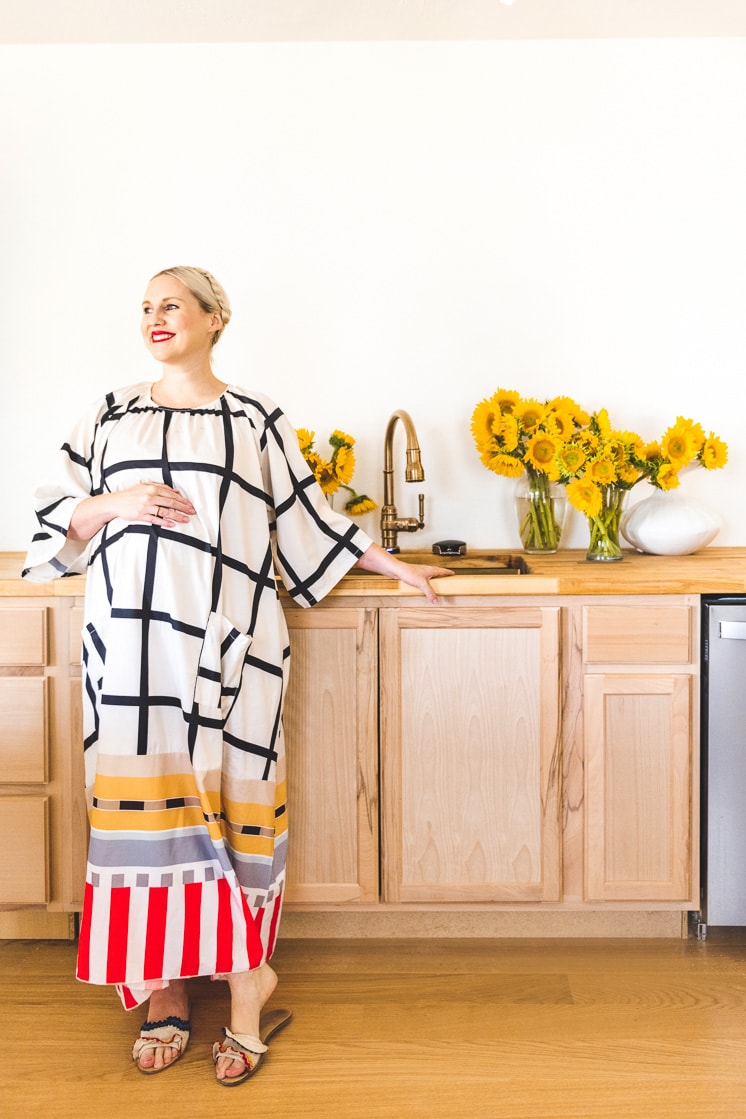 I have to say, the one thing I’m super stoked about is the island made from two Ikea islands. I’m already LOVING the amount of space it provides as you can tell from the video with my adorable son 😉 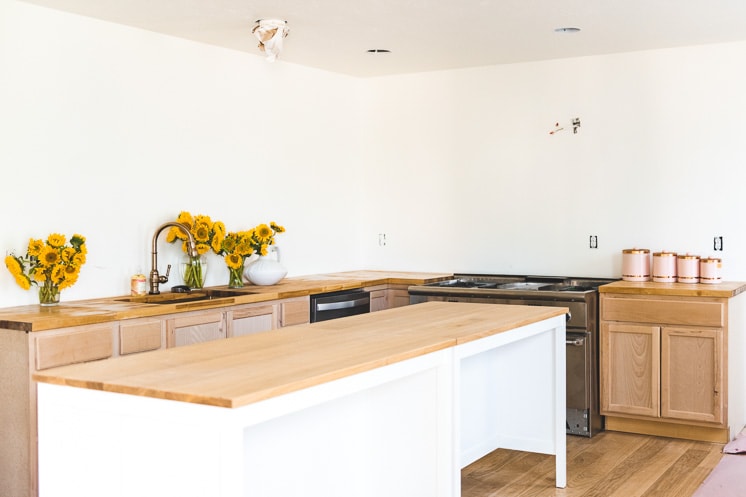 Lastly, I love the idea of not keeping the kitchen white, but what do we do instead? I know it needs to work with the color of the cabinets and tile, but I just don’t know what to do yet, and I haven’t given myself the time to do so yet because I was going insane just trying to get the scheduling under control let alone the aesthetics. 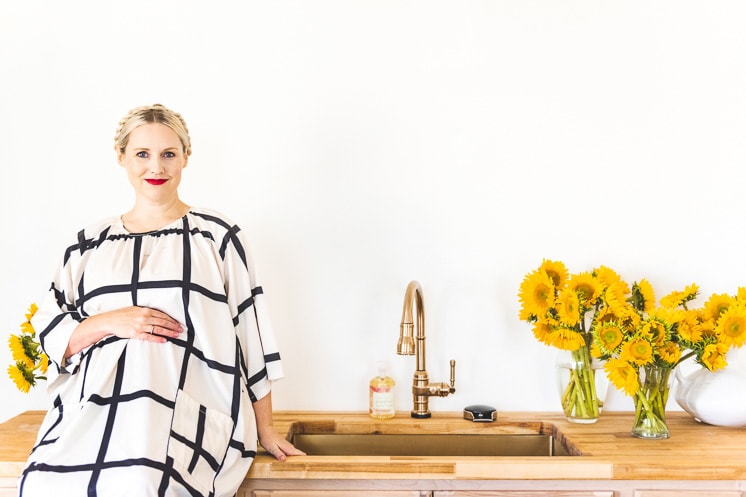 OK! I think that’s it for now, I’d LOVE your feedback! Let me know what you think about 1) the kitchen choices so far 2) what you would do next to finish it up. I’m all ears!!!

This post is sponsored by Delta Faucet but all opinions are my own.

Baby bonnets may be used in the fall and winter to shield your baby from the cold winds and air. They may also be...
Read more

To cut or not to cut: Quilted Coats

We're Moving Studios! In our house looking we intentionally looked at houses where we could potentially put Lars in the basement. It's very common here...
Read more
Bathroom

The House That Lars Bought: Designing our Main Bathroom

Designing our Main Bathroom First things first--something as private as a bathroom wouldn't have necessarily been my first priority in a house that still lacks...
Read more
Artist Feature

The House That Lars Bought: Interview with Paul and Brittany

Working with Meta Meta and I met when I first moved here almost 8 years ago. We were basically wearing the same type of dress...
Read more
Artist Feature