“The best day of my life”

May 6, 2013
21comments
By Brittany
Preface: I am a bit of a walking zombie from all this traveling so this will either be really cheeky or lacking in luster.
We all know I’m joking, right? Right? I got some flack from Al Roker, so I just want to be clear. For those of you just joining, I entered the Kentucky Derby hat contest on the Today Show and they flew the three finalists into NYC last week for the show to choose the winner.
Here’s how it all went down. First up, I couldn’t have asked for better weather in NYC. NYC, you treated me well. I had shipped my huge paper flower rose hat prior so it was there waiting for me when I arrived. Cute lil’ thang. We got a glimpse of the prize the day before: a replica of the real Kentucky Derby trophy. 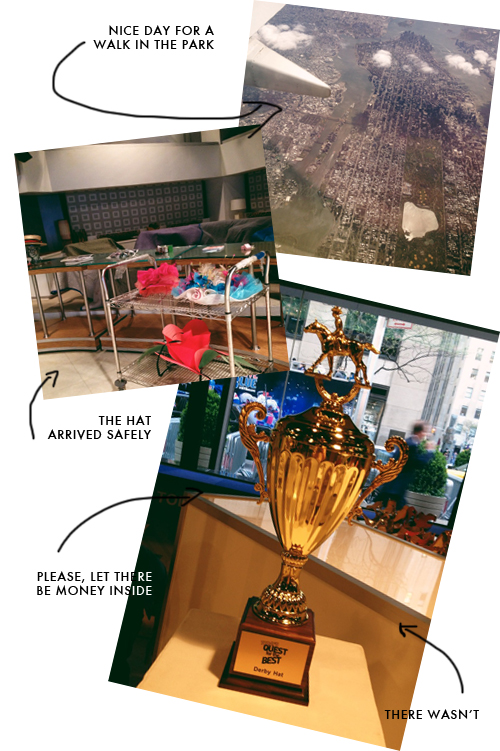 We stayed at a hotel across the street from Rockefellar Plaza so that early the next morning we could be ready for our big day. The other two ladies were so sweet. One was from Nashville and the other from Louisville, so as the lone Westerner, I felt a bit illegit. I mean, how do you compete with two Southerners? It should be illegal. That morning I arrived to the studio stripped of make-up so that they could make me over Ooompa Loompa style.
Oh oh! I must say that the night before, I raided Anthropologie right across the street for a more appropriate outfit for my TV debut. And I found a peter panned collar shirt with HORSES RACING on it. I mean, does it get any better?!
Behind the scenes, you watch the show live as it’s being filmed. The guy from The Office was on it that day. Darryl. Craig Robinson to be exact. He made us clap for him when he arrived back in the studio from his interview. Well, of course I’ll give you a round of applause!Your studio audience doesn’t. 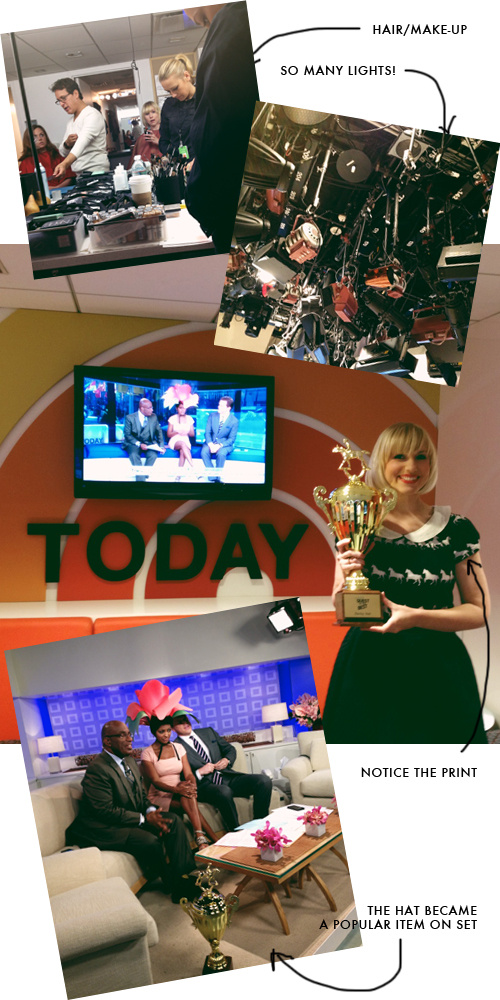 Was I nervous? Not until I got on the stage and had to stand–perfectly still–with the huge hat on my head. You see, I have a habit of fainting so this would have been one of the less preferred places to faint. McDonald’s ball playground? Much preferred. Soon, June Ambrose, celebrity stylist, was the judge along with Al Roker. I muttered some nonsense, which you can watch above. One thing I wasn’t allowed to mention? This here BLOG! Truly!
And then…drum roll please…… I won! Now, if you watch the clip, you’ll hear the part about how the other contestant based her hat on her 7 friends and two of them are cancer survivors. Guys! There is no way I should have won this contest! I mean, give it to the cancer survivors for crying out loud! Well, now I have a huge carry-on to take with me. I’m thinking of turning it into a DIY project. But what????? Any ideas out there?