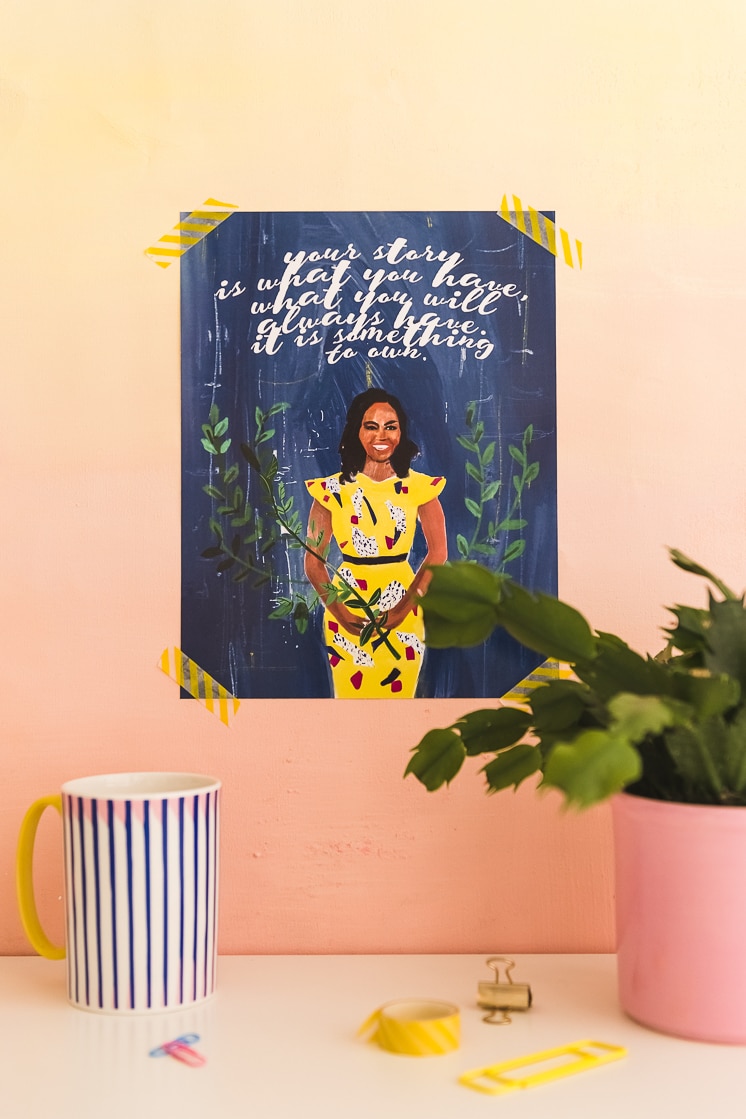 When we announced our book club book for January, I didn’t expect such enthusiasm behind it. I’m so glad! Michelle Obama’s book, Becoming, really is inspiring regardless of politics. The book inspired our new series of interviews focused on women in creative positions. If you haven’t had a chance to read some of them, I encourage you to do so.

To support the book, I asked illustrator and artist, Cat Seto of Ferme à Papier to create an illustrative quote and she NAILED it. I love how it turned out. It reads, “Your story is what you have, what you will always have. It is something to own.” It fits so well with our theme for the month, and you know what, we’re making it the theme of the year. 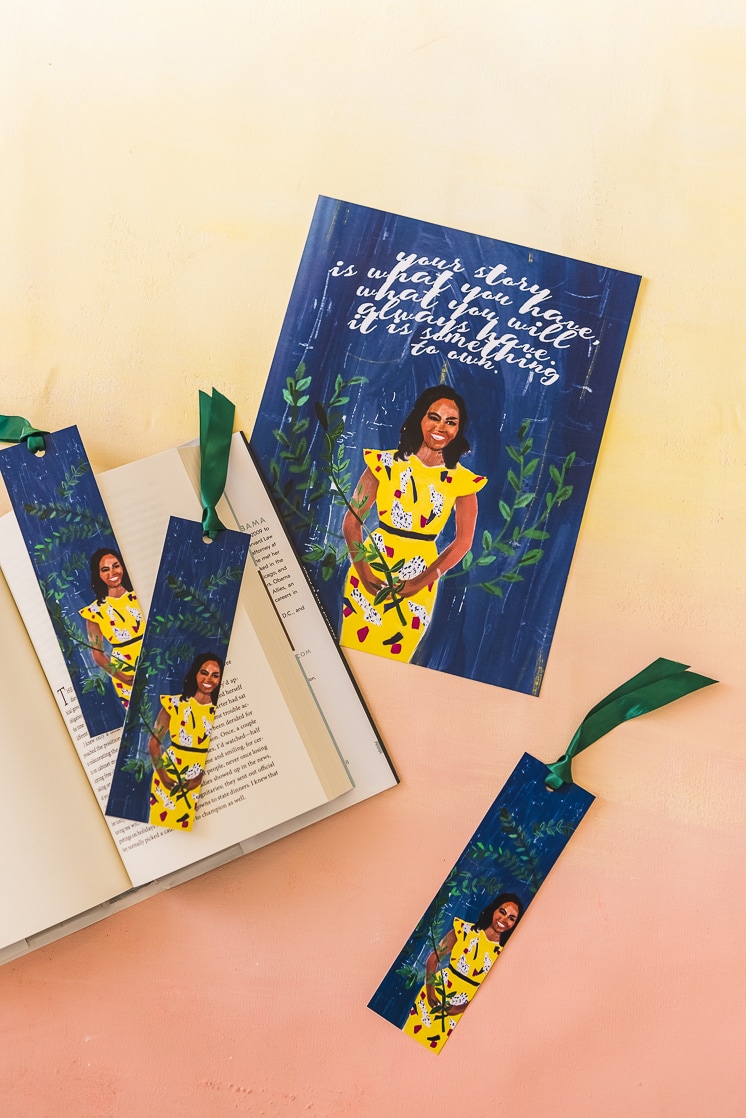 Learn how to print this free printable posters and bookmarks below!

Greetings, readers! Have you enjoyed Becoming? We’ve heard Michelle Obama herself reads the audio version, and that it’s fantastic! What has been your favorite part – Michelle’s down to earth manner and upbringing? The Obama family? A behind-the-scenes look at an intense political career? There’s so much to discuss in this book! Here are a few discussion questions, plus a few reading suggestions below. Have you read other books about women involved in politics? Please share!

1. Michelle learned and shares with us so many lessons from her childhood. How did she apply those to her time in the White House and the national spotlight?

2. We have all felt inadequate at some point in our lives, and Michelle states, “Failure is a feeling long before it’s an actual result.” How has this been true for you, and how did you overcome it?

3. Over and over, Michelle reiterates how important it is to connect with people. She had a supportive, loyal family in her childhood, numerous mentors to help her succeed as she career-climbed, jobs in city hall and the hospital, received advice from former First Ladies, and girls all over the world who reminded her of herself. How do you connect face to face with others and why do we NEED to?

4. “Confidence sometimes needs to called from within. I’ve repeated the same words to myself many times now, through many climbs.” Not only was Michelle often one of a small percentage of African Americans in the schools she attended, but she was often the only woman sitting around a conference table, voicing her opinion at each job she had. How did she handle it and what can we learn from that? What needs to change??

5. As Barack rose to prominence and was elected as an Illinois senator, Michelle voiced her fears very clearly: “I was now Mrs. Obama in a way that could feel diminishing, a missus defined by her mister. I was the wife of Barack Obama, the political rock star, the only black person in the senate…” Would you have felt the same? How did she remain her own person throughout her husband’s endless career demands? 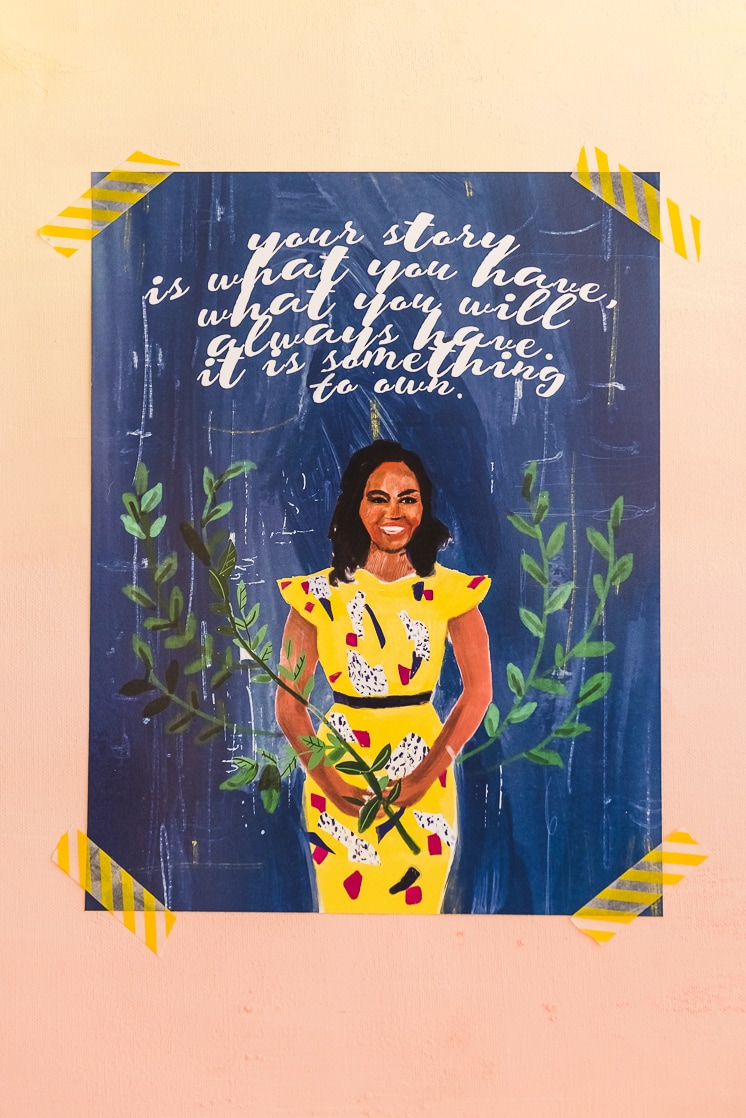 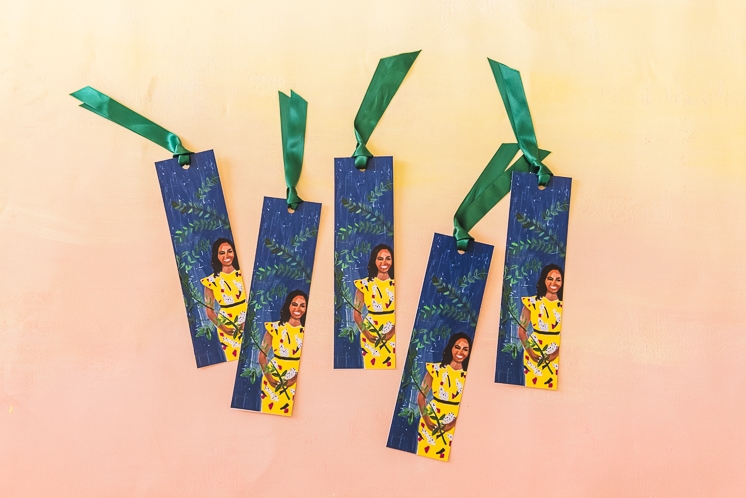 If you liked Becoming, you might like…
My Own Words by Ruth Bader Ginsburg
My Beloved World by Sonia Sotomayor
First Women: The Grace and Power of America’s Modern First Ladies by Kate Andersen Brower
Betty Ford: First Lady, Women’s Advocate, Survivor, Trailblazer

Illustration by Cat Seto of Ferme à Papier. Stay tuned for a featured interview with her later today!

0
Directions: Cut out the 5 designs of Papel Picado using the templates, you can use a craft cutter for this or an exacto...
Read more

0
Directions: Using a pencil draw a rainbow shape of the cardboard, once you have a shape that you like cut it out mine is...
Read more
Architecture

0
Miami City art prints Like the other prints in the Lars Print shop, each design can come however you'd like--as a download where you can...
Read more
Dinnerware