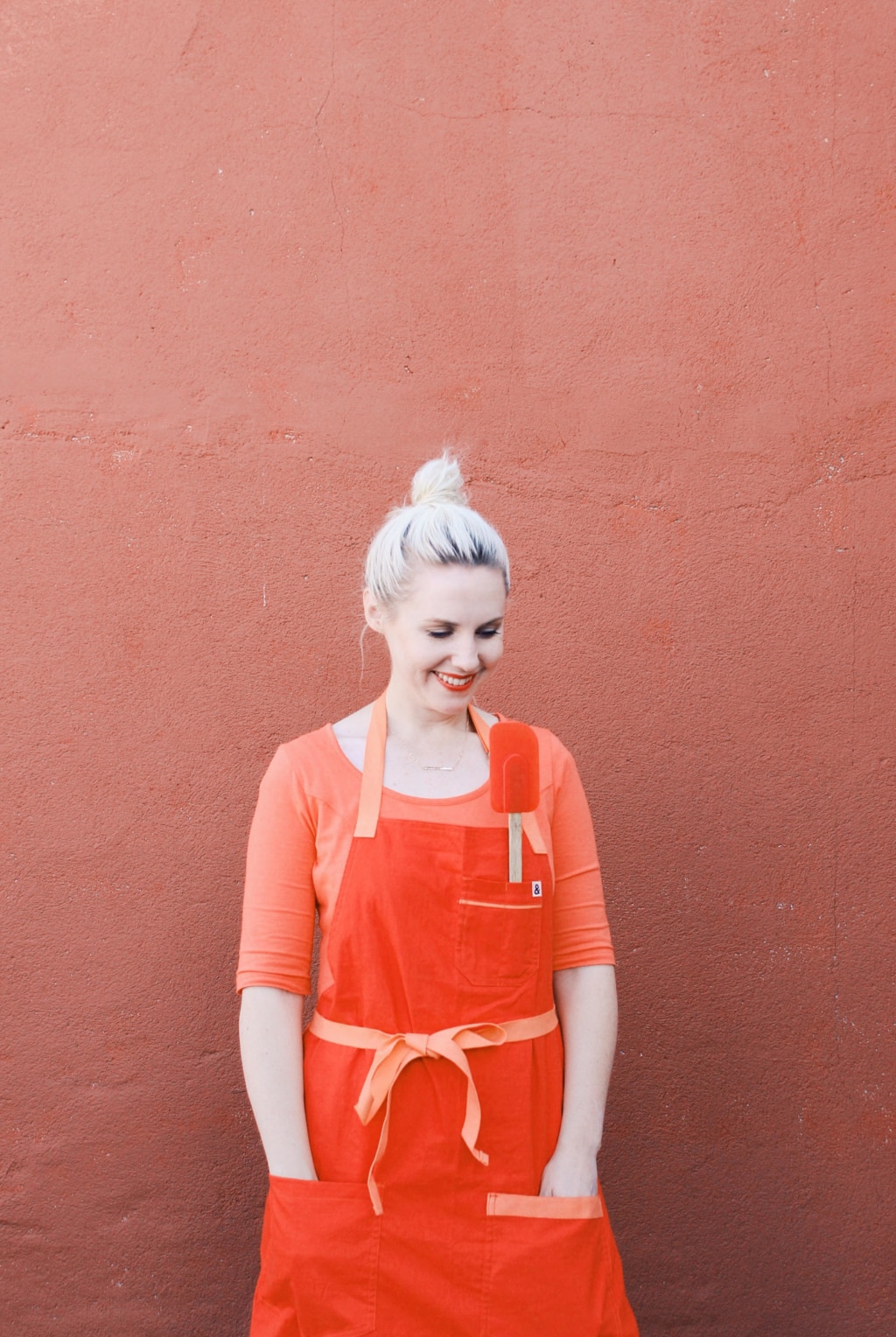 Why I feel called to craft: Part 2

Last week, in honor of National Craft Month, I wrote an essay about why I feel called to craft. It began in graduate school when I started my now business, The House That Lars Built, but I can’t tell my story without mentioning those who came before me because I am definitely a product of them.

My family history has been engrained in me from when I was a child. We had a multi-inch book of our our family records that dates back hundreds of years (in my mind it was 10″ but I wouldn’t be surprised if it’s more like 4 or 5″) and I would spend hours looking through the names and places and dates trying to figure out exactly how I fit in. I was enchanted with the idea that I had a grandmother from Ireland and a great great grandfather from Denmark. I was obsessed with all things Europe (explains a lot, huh?!) and I thought it was SO cool to be from those beautiful places.

The stories my mom would tell me about my grandparents and great grandparents, etc, shaped my narrative and formed my identity. My great-grandmother, Marilla Zatelle, painted porcelain, sewed her own clothes, and was truly a force of nature–it probably helped that she was 6′ tall. I remember visiting her in the hospital before she passed away at age 97 and knowing that I was Danish stock like she was. 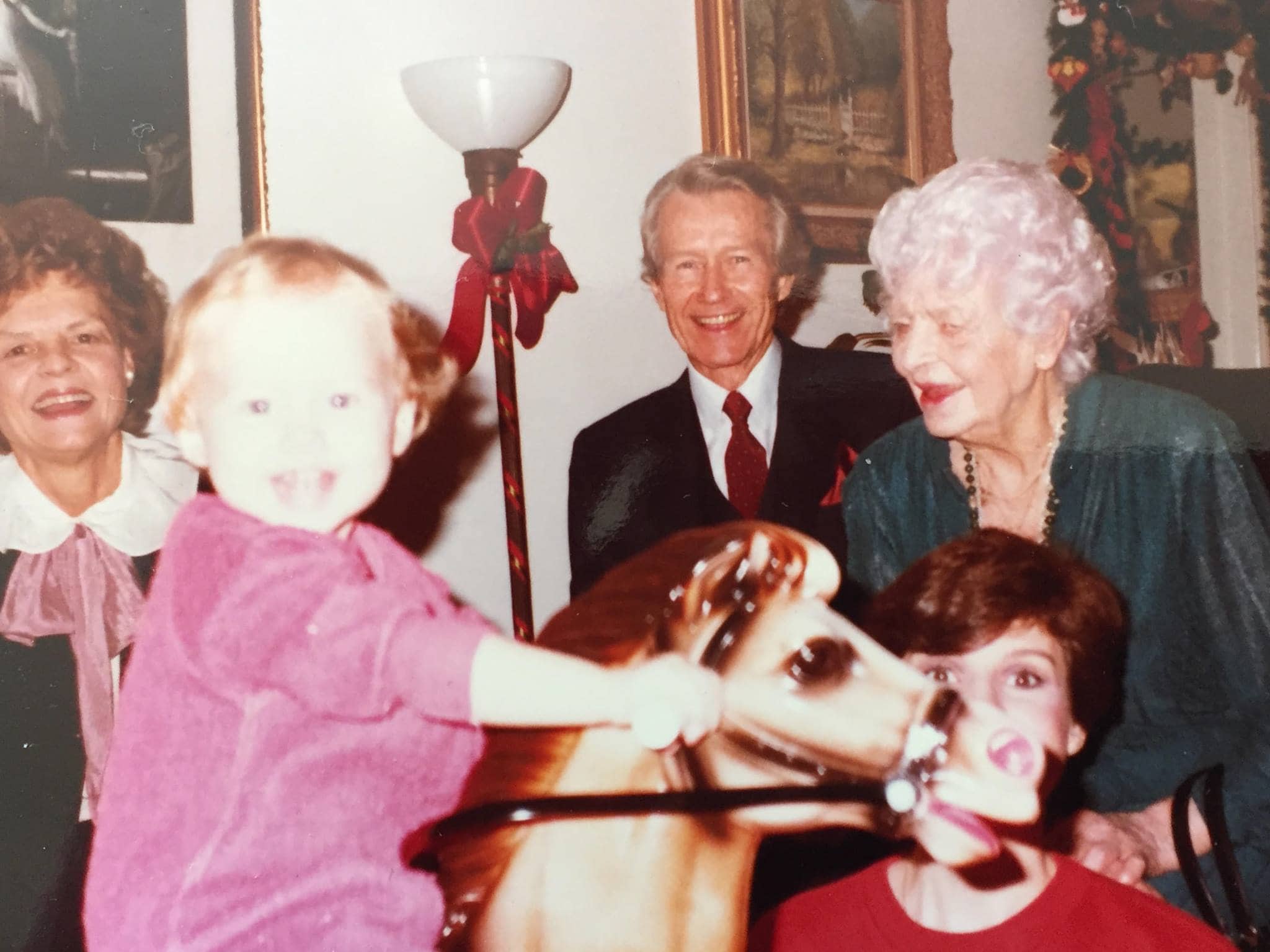 From left to right: Dorothy, me, Carl, Zatelle, my mom Kim

Her daughter, Dorothy, my grandmother, even though she has passed on continues to be my artistic muse and great human being icon. She was pretty much an angel on earth with a wicked sewing room in Los Angeles, California. I dedicated my book, Craft the Rainbow, to her and even wrote an entire article about her and Carl, my grandfather, in volume 3 of Kinfolk Magazine about their wellness routine. They are legendary for their subdued natures, gentle kindness, endless generosity, and health regimen (no sugar! though I remember Grape Nuts in all natural apple juice as a real treat). 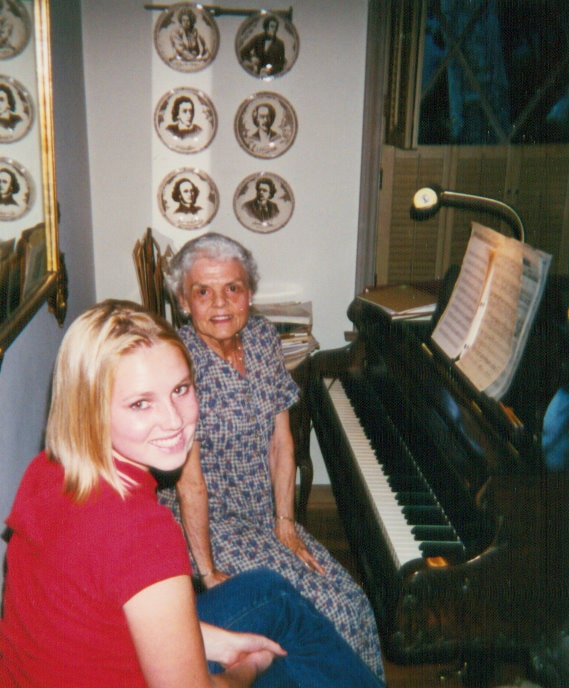 Dorothy at her piano. This was definitely in the 90s. 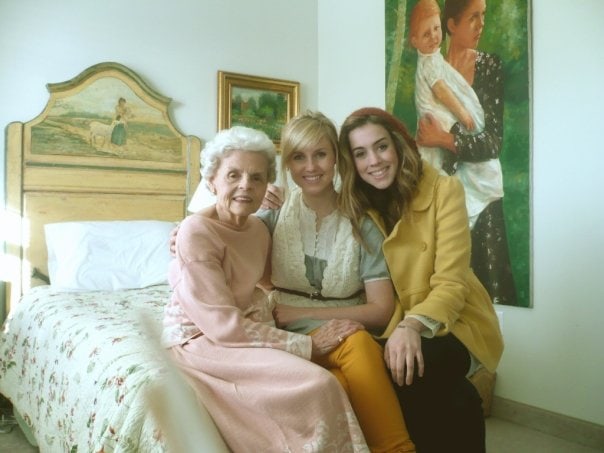 This is Dorothy and my sister, Caitlin.

Going back to the beginning

But let’s get back to that sewing room. Dorothy and Carl built their house in 1951 in Bel-Air. That’s Bel-Air before Fresh Prince, so the houses weren’t Kardashian proportioned or bedazzled. Dorothy was infamous for protecting her newly done hair with a grocery bag when it rained and other such resourceful tricks that come when you’re a product of the Depression. She taught me to sew and whenever we’d come up to visit from Orange County, sometimes for days at a time, I’d churn out all sorts of doll clothes for her Shirley Temple dolls. For one Christmas I sewed her a green drawstring bag with lace tied at the ends and filled it with all sorts of nuts…because that’s what I could get my hands on. She said she loved it, but I still cringe at the thought of nuts from who knows where.

Her sewing room consisted of fabrics that she had collected from all around the world piled in a beautiful yet simple armoire. I remember feeling in awe of her collection. And her ribbons! Gah! And buttons?! They were extraordinary. Thinking about her sewing room now, I can see how it’s MUCH easier to make thing when you have a designated place to create. I’m working on that concept for my own house. 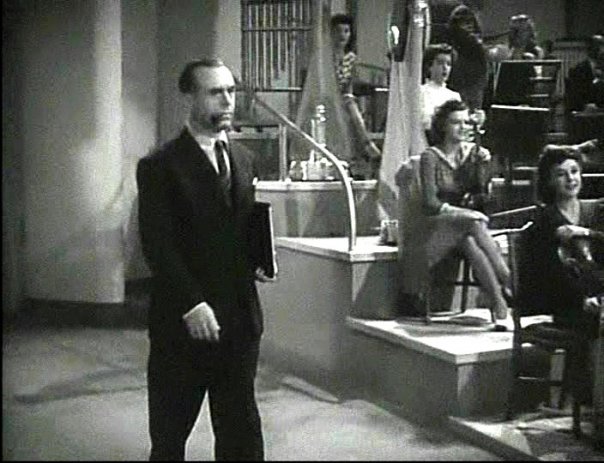 Dorothy sitting on the first platform.

Now, let’s talk about Dorothy’s daughter, my mom, Kim. She and her two sisters and brother grew up in LA, but the way she describes it seems much more of a quaint village than a major city that happened to make movie magic. For example, Dorothy played the violin for Hollywood music scores, my aunt and uncle were in TV shows and films, and their friends were in this show and that. My mom attended the Academy Awards with a friend. You know, stories like that that I only find out as an adult. 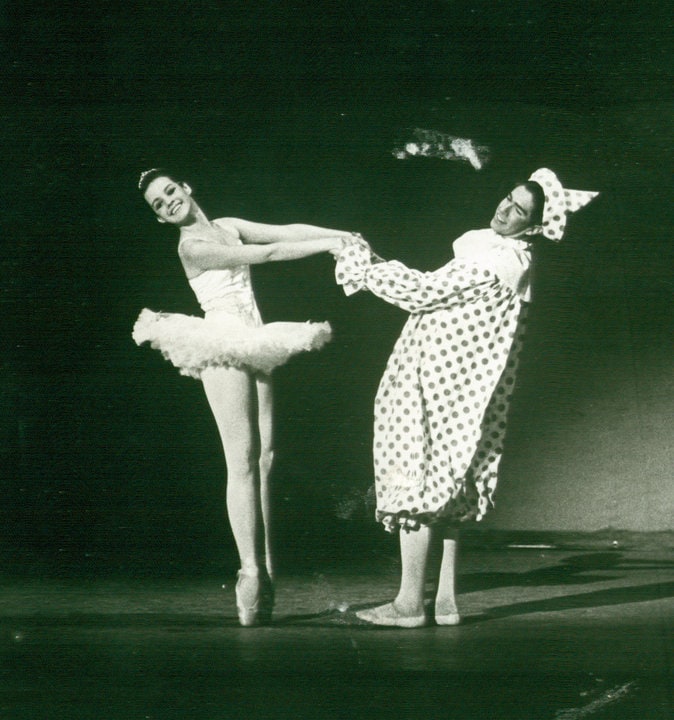 But their real talent was dancing. My mom and her sisters all left home when they were 16 to go dance at the School for American Ballet and the subsequently, in the New York City Ballet. The long story short is that my mom got injured after about a year and moved back to LA where she started a modeling. She says she walked into Seventeen Magazine and walked out on the cover of the January 1969 issue. Again, quaint neighborhood vibe? I don’t know. It’s hard for us to understand that mentality now that everyone and literally their dog aspires for fame. 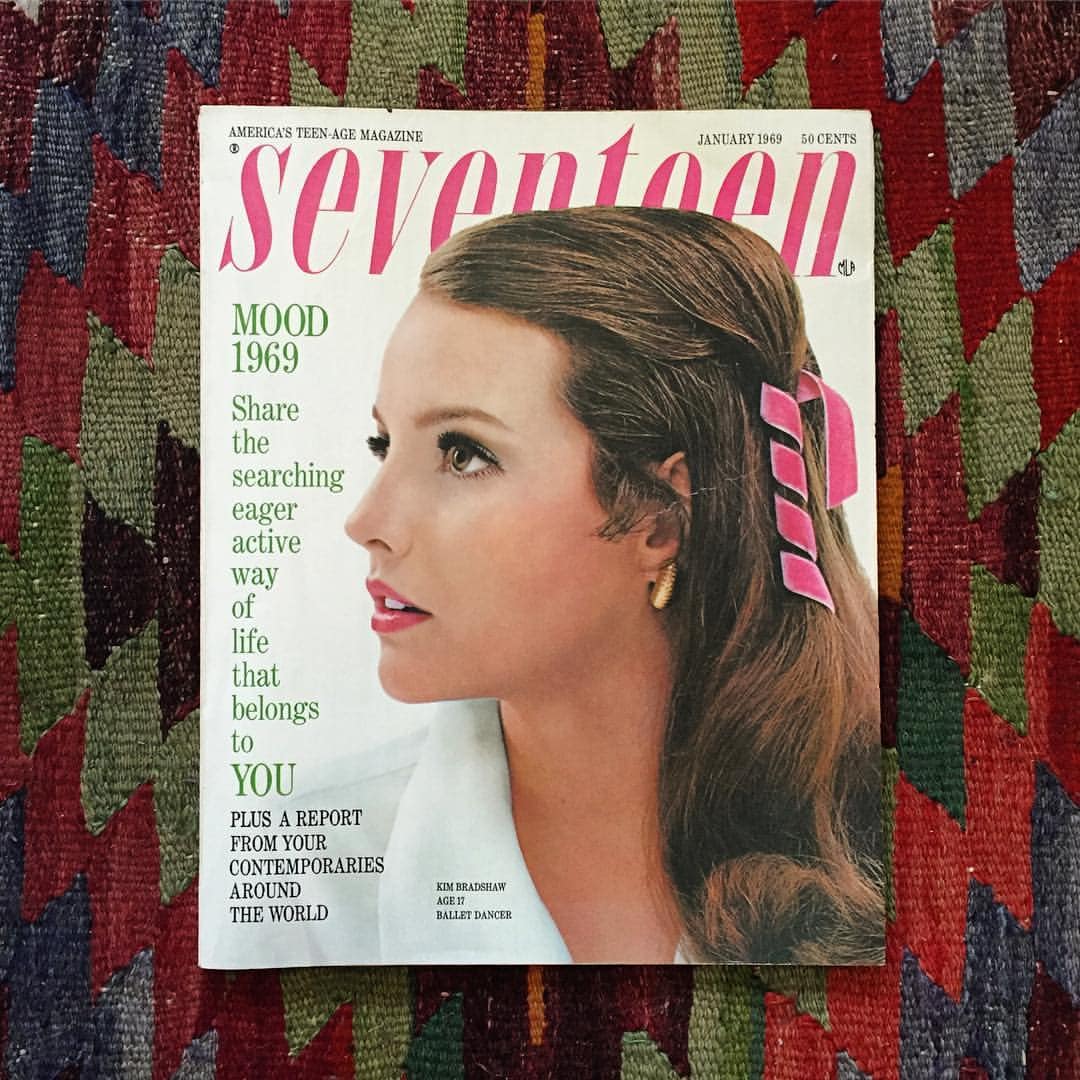 Fast forward to her career in interior design, calligraphy, music and more to when she becomes a mother of four in five years. I’ve mentioned it before, but this magnet on our fridge growing up really does describe my mom the best: “A creative mess is better than tidy idleness”. And thus, we grew up in constant messes. My mom let us try all the things and would encourage us to think differently. How is everyone else doing something? Then do something else.

Our school reports were pretty epic. There wasn’t a three ring binder in sight. We figured out clever ways of binding the books according to what the subject was. For example, for my report on Claude Monet (another artistic hero to this day), I made a cover out of cardboard and cut it out to make it look like a painter’s palette and secured it together with a paintbrush. I mean, it did get to the point where I was jealous of those three ring binders, but I see the magic of it all now. 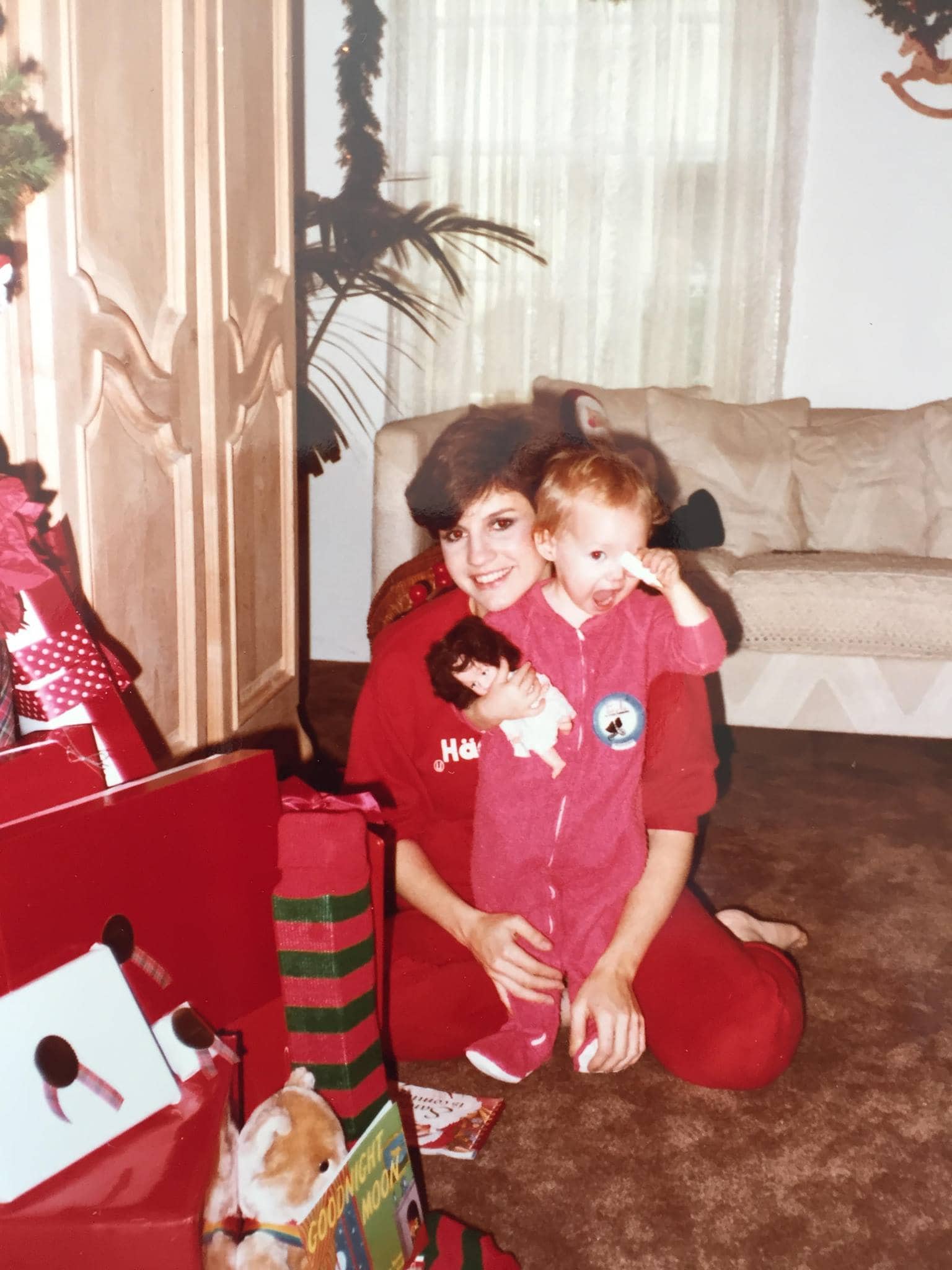 When I was in kindergarten or first grade, Mom opened a beautiful shop called En Provence on Pacific Coast Highway in Corona del Mar and it was one of my first experiences off all encompassing magic. A true wonderland. Like old houses in Provence, she plastered straw into the walls and hand painted everything! It was a gift and furnishings shop and I think it must have been the most well-curated experience. The furniture was made and painted by my uncle, Dean Bradshaw. You can see a glimpse of it in the picture above of my grandmother. That bed was created by him as well as the paintings. But life became a bit much with four kids and so she closed up shop after 4 years.

When I was about 10 or 11 and I started a club called Crafts for Holidays. I’m not so much proud of the name, but what can you do. The club was modeled after my mom’s church group where they would get together monthly and make or do something. So, for Halloween we made can tin pumpkins. We sponged on paint in a variety of oranges and painted on faces. Then for Thanksgiving we appliquéd  turkeys onto corduroy pillows. For Christmas we turned a string of pinecones into reindeer complete with a red pom for Rudolph. I don’t know if my friends were into crafting, well I know they weren’t because the club didn’t last too much longer.

ANYWHO, I tell all this because it makes more sense how I arrived at what I do now knowing who I come from. I mean, I wasn’t aching to start a craft-based business at first. In fact, I never would have entered my brain. I was much more involved in music (I played the cello growing up) and tennis (I was on my high school tennis team) than I was in the arts. I wouldn’t even say that I did it as a hobby at that point because I was really into getting good grades. But because my childhood foundation was laid out in making, just like that industrious lot who came before me, I can see NOW how it happened. 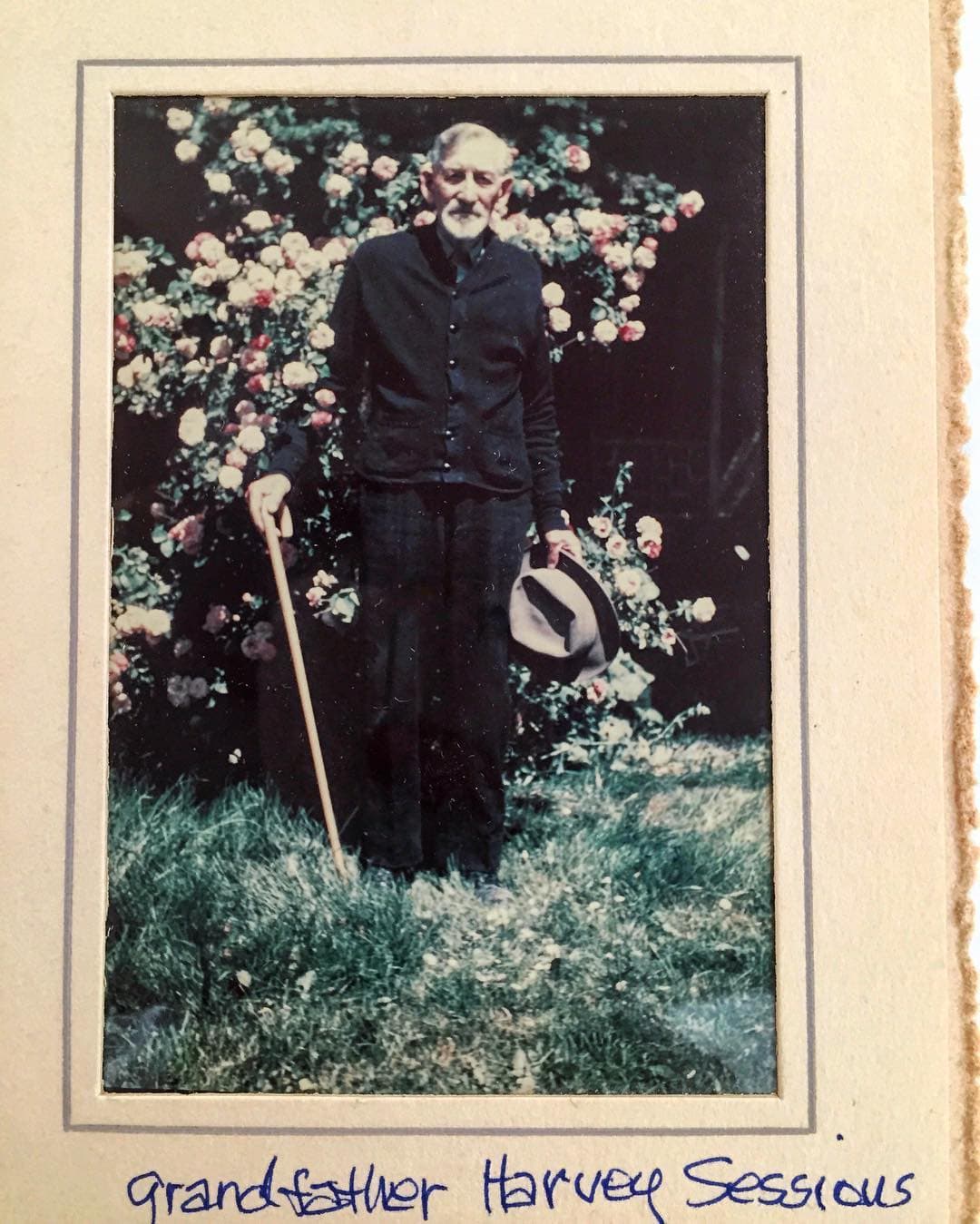 This is my grandfather Harvey Sessions, who I didn’t mention at all here, but the photo is so good I had to include it.

And because of that I’m very interested in continuing my grandmother’s legacy and carrying out the mission that I’ve identified along the way. I’m compelled to do it and I find a great need to do so, especially since we are more addicted to screens than ever. There is power in handmaking. It connects us to our bodies and souls and for me, my family.

Stay tuned for part 3 next week!