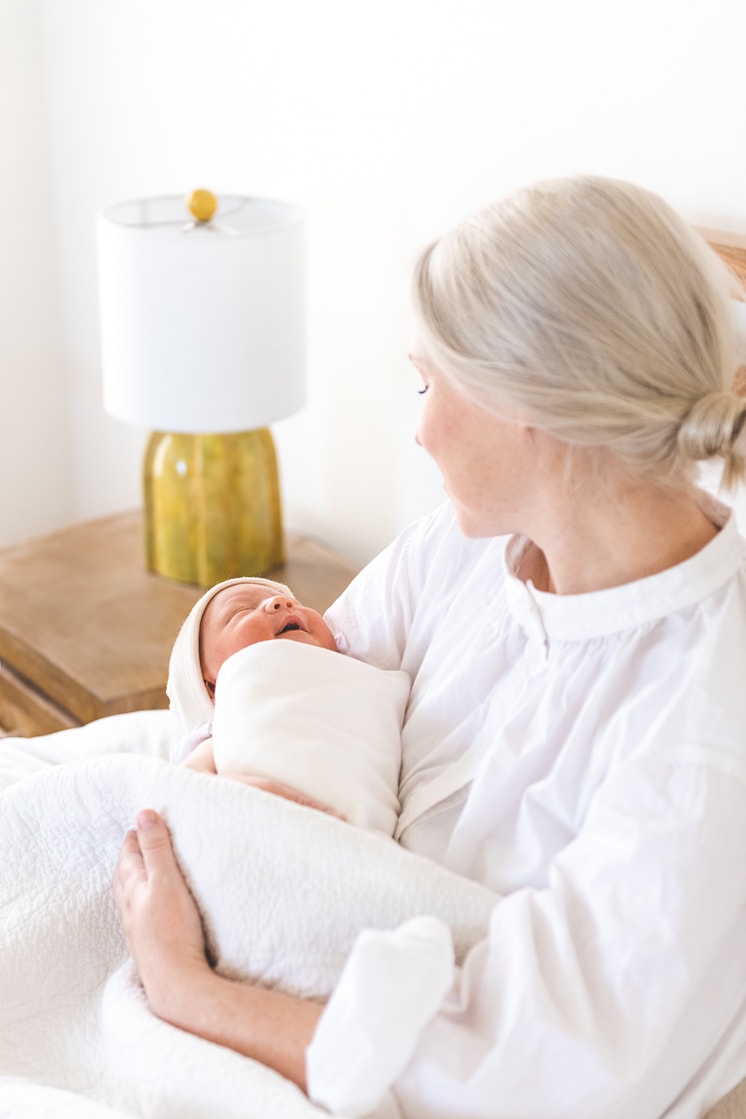 If you didn’t catch it over on Instagram, Baby Felix arrived on December 21st. Much like Jupiter aligning with Saturn, we like to call him our very own Christmas star 🙂

We’re three weeks out from Felix’s birth and I can’t help but compare this experience with Jasper’s (you can read about his here). Turns out, the two couldn’t be more different. Jasper’s was, as Chris Harrison would say, “the most dramatic season” while Felix’s was just what I prayed for–NO DRAMA! Hooray! (other than the fact that every birth is pretty dramatic! A mini human coming out of you???!!!). In fact, there’s so little drama that I probably shouldn’t even write about it publicly–will you be bored? Maybe! But I’ll go for it anyway, if only for posterity’s sake, since I’ve lost all sense of private personal journaling.

The first two times I was pregnant (the first one ended in miscarriage), I was super into the idea of doing things without medical intervention. The first one I had planned on doing a home birth and the second time I had planned on a birthing center. Now, as you read here, the birthing center experience didn’t quite go to plan. In a nutshell, I had an eclamptic seizure, which sent me to the hospital. I was put on magnesium (mag), which made me pretty much unconscious for the majority of my birthing experience and quite groggy for weeks after. For this reason I have only flashes of memories from Jasper’s birth. In fact, I have such few memories of the experience that I don’t remember being in pain, or really pushing or the length of time. It was pretty much all a blur.

While I may have been super granola in a previous life, this time around, I decided to take all precautions–no repeats please–even though the odds it happens again goes down dramatically the second time. I saw an OBGYN who took on high risk cases and she recommended taking a baby aspirin every day, which has shown to reduce the risk of preeclampsia. Gratefully, everything was completely normal throughout the pregnancy, other than this time I had tons of pelvic floor discomfort and couldn’t really walk towards the end…but that’s TMI…

In the end, at the advice of my doctor, I decided to get induced about a week early to prevent what happened last time. It hurt my “come when it comes” heart, but in hind sight, scheduling a birth is pretty awesome. I mean, I could give my employees and clients a definite time when I would be in the hospital. It still sounds so working girl who needs to schedule out her life, but it is what it is. 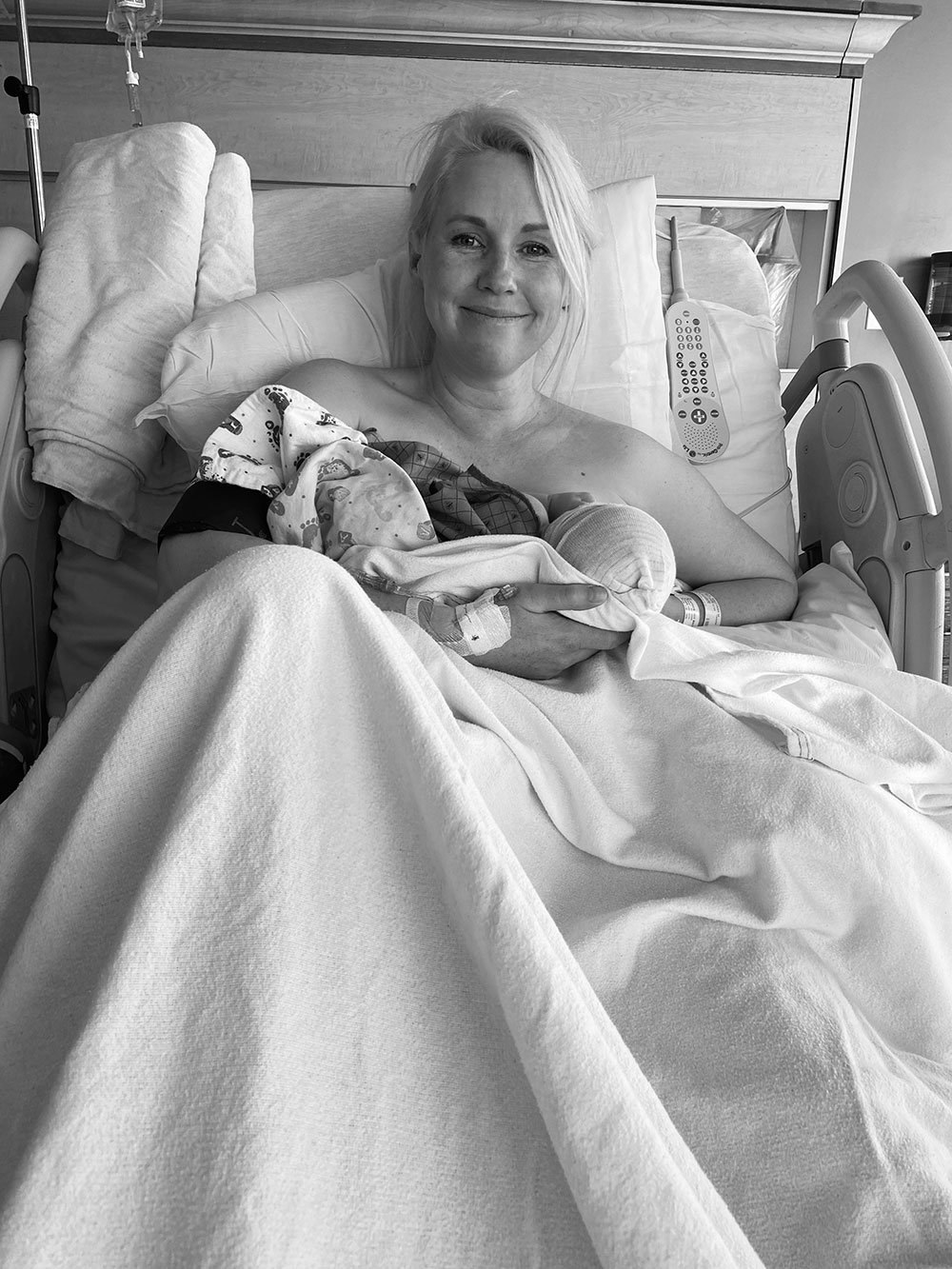 I called the hospital the morning of the 21st at 5:30 am and they said to come in in an hour where they would have a hospital room waiting for me. This time, because it wasn’t a surprise, I took a shower, got ready, which I hadn’t done since…2019? and then we headed in. Thankfully, I could bring Paul with me after getting tested for COVID that weekend.

Next the question was…epidural or no epidural? In a previous lifetime it would have been an easy “no way! I’ll do no medical intervention, thank you!” But this time…it was a harder decision! With Jasper, I really got into a good zone with the laboring. We had done hypnobirthing and I was doing daily affirmation practices and was in a great mental spot. I was SO confident going into it. Once I started going into labor I was watching Emma, the Gwyneth version, and then listening to lovely music–it was so calming. This time, I didn’t do as much practicing (#toddleryears) and once I got into the hospital room, they connected me to this and that machine checking on all kinds of levels with nurses in and out of the room. It was busy for sure and I knew I wouldn’t be able to get into the headspace that I had had so I made the decision to do it.

After a few hours I was ready to push. I took a look at the clock–2pm and after like 5 or 6 pushes, he was out. Just. Like. That! It was extraordinary! 15 minutes!

And he was perfect! Get that boy in my arms! 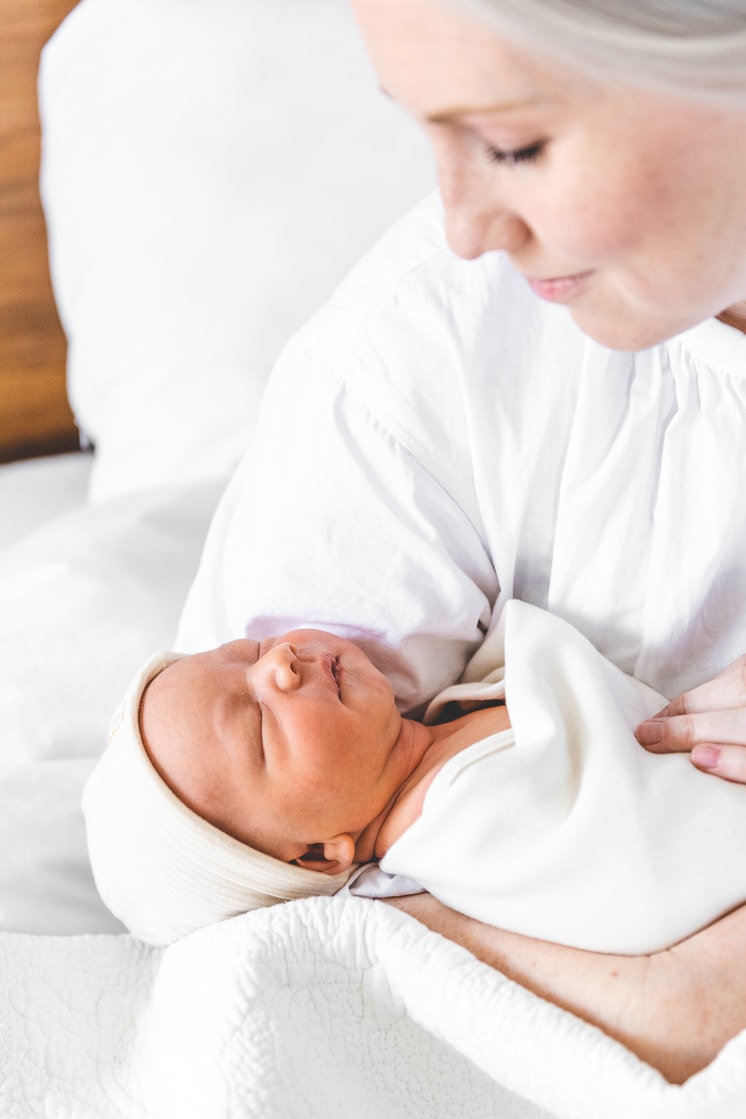 I like to wait to see who the baby is before giving a name. With Jasper it took a week and this time, I didn’t have any other names that I liked besides Felix and Carl so we put the two together. Felix, mostly just because we liked it, and Carl because it’s my grandfather’s name. My grandfather was an angel of a man and I hope that Felix inherits his calm and poised demeanor.

ANYWHO, life post baby is filled with, of course, the highest of highs and some not fun moments like BREASTFEEDING! This time has gone better and faster and we’re getting into a more comfortable state, thankfully. Because I was so groggy last time with Jasper, I didn’t have many clear memories of the first few weeks. I do recall that he started to sleep through the night pretty early. Felix, not so much. It’s normal baby schedule, just once or twice during the night to feed, but still a surprise based on last time. I’m much more sleep deprived than I was last time, sadly, which is hard when there’s another child now and trying to fit in some work. Right now it’s pretty much an eat, sleep, poop rotation as babies tend to do.

I didn’t have clear maternity leave dates but because my studio is now at my house, I have more insights into what’s going on with Lars and I’m finding that being involved, even if it’s not full time, has been really good for my brain. And also tricky–because owning your own company never has clear cut definitions and there’s not really a way to take time off. I mentioned this to my doctor last week and she gave me some great advice–trust your team. And I do! And I feel very lucky to have them.

We brought Felix home introduce him to Jasper and here’s how it went: 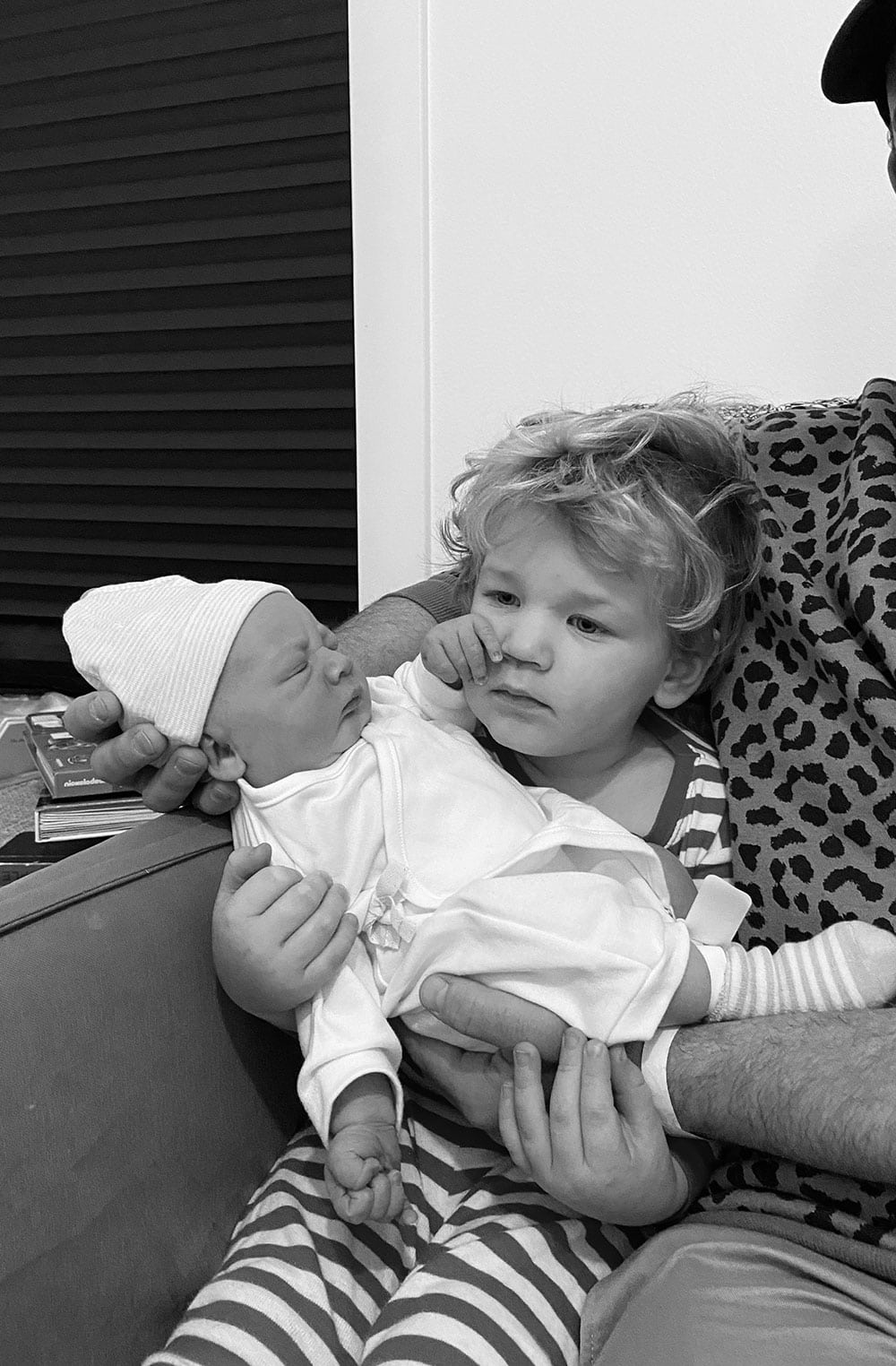 Ha! We had woken J up from a nap and he was so out of it. All in all, Jasper’s been super loving on him, but a few days after he started hitting, biting, and kicking me and Paul a lot, all a reaction of the lack of attention on him. It has since subsided and he loves giving Felix hugs, kisses and toys. I hope it continues! 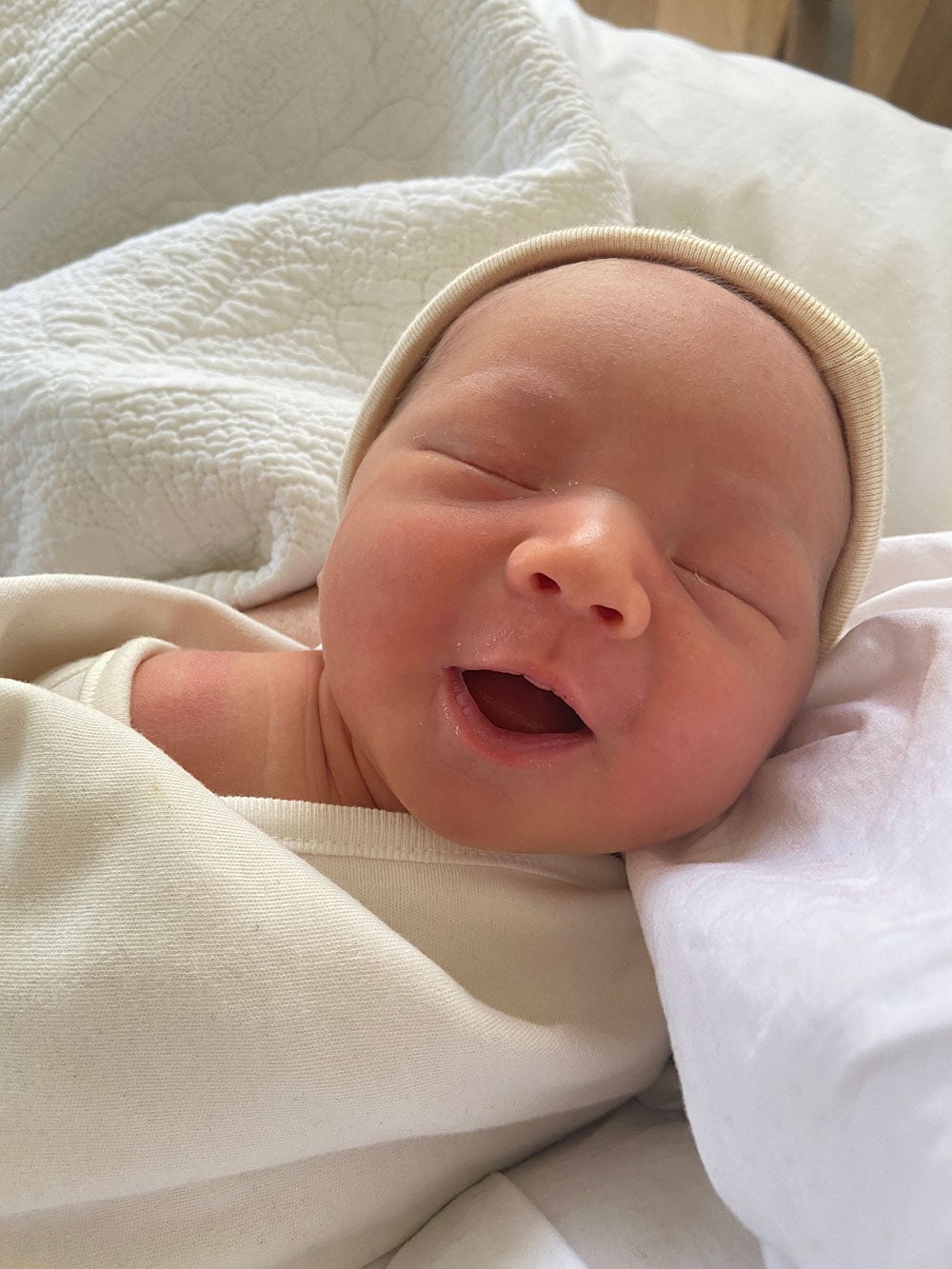 Well, I’m just glad I have no crazy stories to tell, but thank you for checking in on us to see how we’re doing. I’m buoyed up by your encouragement. It’s a crazy time as we adjust to a family of four, and I’m constantly questioning our decision to stay in America (for many reasons, but right now because of the lack of maternity and paternity care versus Denmark. If I was running the world…). And in general it’s a crazy time in America’s history, but I see hope and love when I look at this boy and that’s keeping me optimistic.