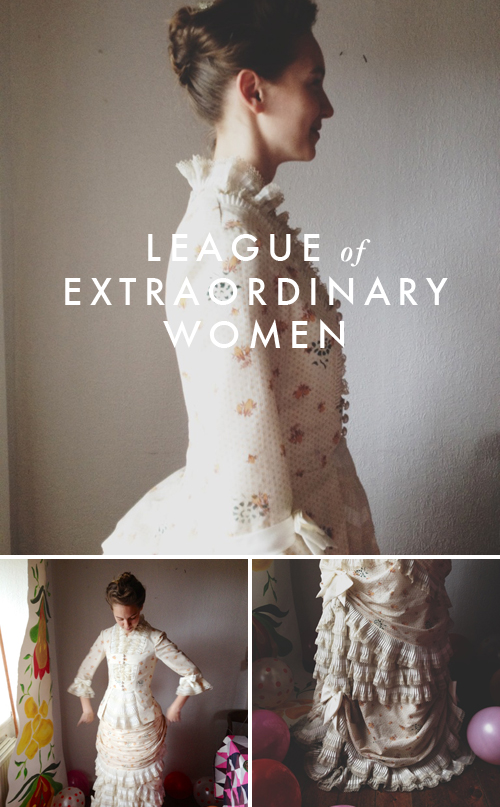 I had a very belated 30th birthday party on Saturday. I learned that everyone splits town for the months of June/July in Denmark so September it had to be. I planned this “League of Extraordinary Women” party mostly because I love dressing up and thought it was my chance to make everyone else do the same. Muhaha. The gist was this: everyone selects a woman who did something noteworthy over the age of 29 and dress up as that person. Then, you guess who that person was. Pretty much, I wanted to find out why the 30s is so awesome and you know what? In researching women, I found that so many famous/awesome women were in their 30s when they did their awesome thing. Amelia Earhart? 31 when she flew across the Atlantic. Christina, above, also loves dress up parties. Guess who she is? That’s right, Lucy Maud Montgomery, who published Anne of Green Gables when she was 34. Isn’t her dress phenomenal? She’s a dancer with the Royal Danish Ballet and has had her eye on this dress from the costume department for ages and finally had a chance to put it to use. Can you guess who I am? Christina came with a bag of wigs and this was the closest thing to my woman. It should have been a bit shorter and a lot whiter. 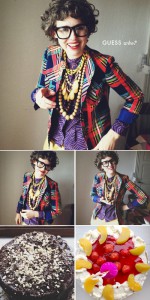 If you said Iris Apfel, then you got it! The details totally off in so many ways (need round glasses, not so miss-matched, etc.) but maybe you got the gist. I love Iris, the icon of fashion and style. She’s definitely become more prominent in her more advanced years after founding Old World Weavers, the textile company. For some reason I felt like posing as Iris was all about the lifted arm.

Paul made some delicious cakes including his Devil’s food and carrot cake, which I have had for breakfast every day since. My sister-in-law came as Mia Hamn and was so kind in making a traditional Danish lagkage. Thank you Ximena! We also played a game called “Name That Tune–30 years of #1 hits” where I played a few seconds from each song on this playlist (it starts with the year 1982) and then provided the guests with this sheet (with an answer key) to mark each year from 1982. You can download it for free too and adjust the dates if you want to play it for another year.