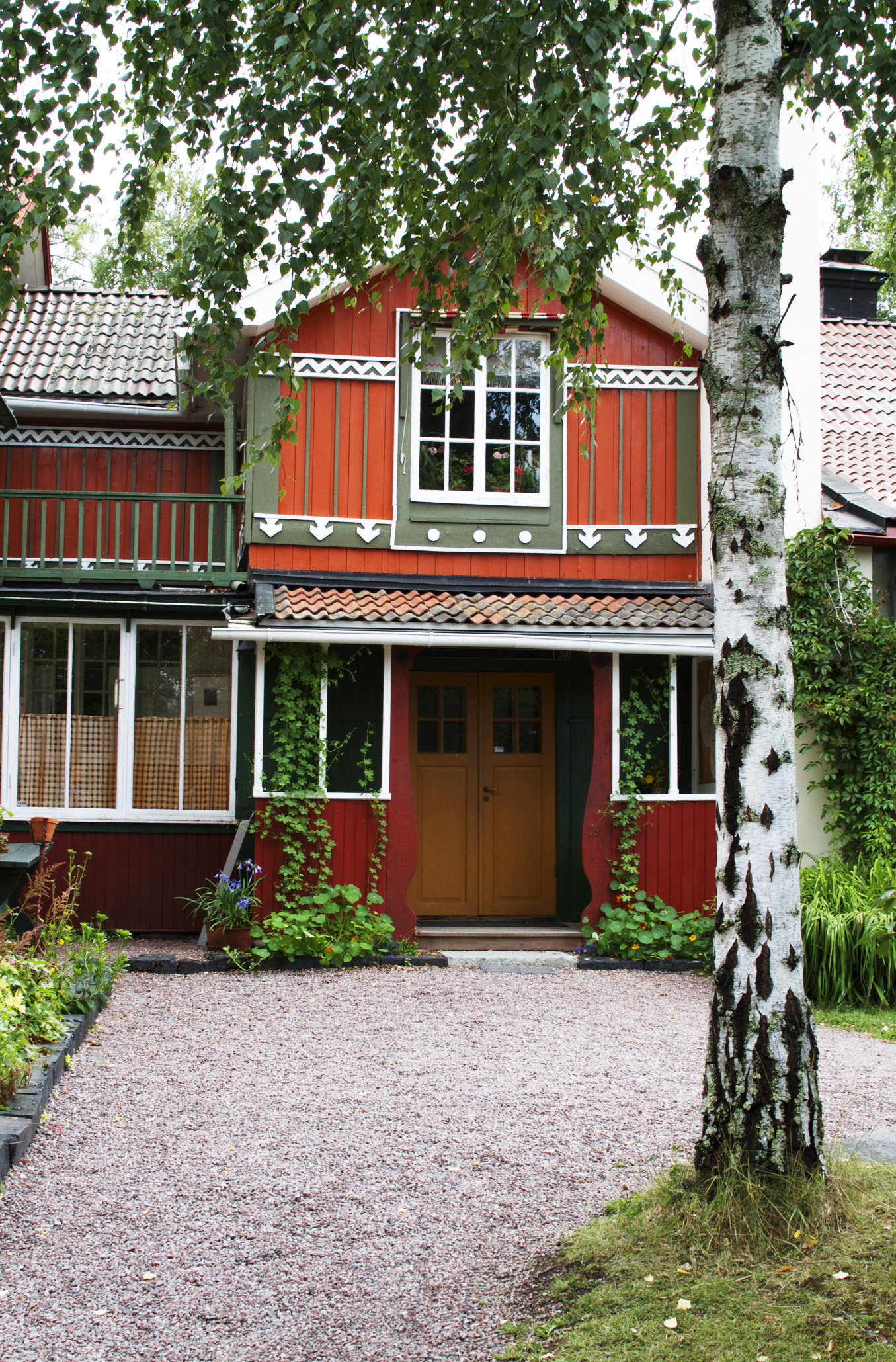 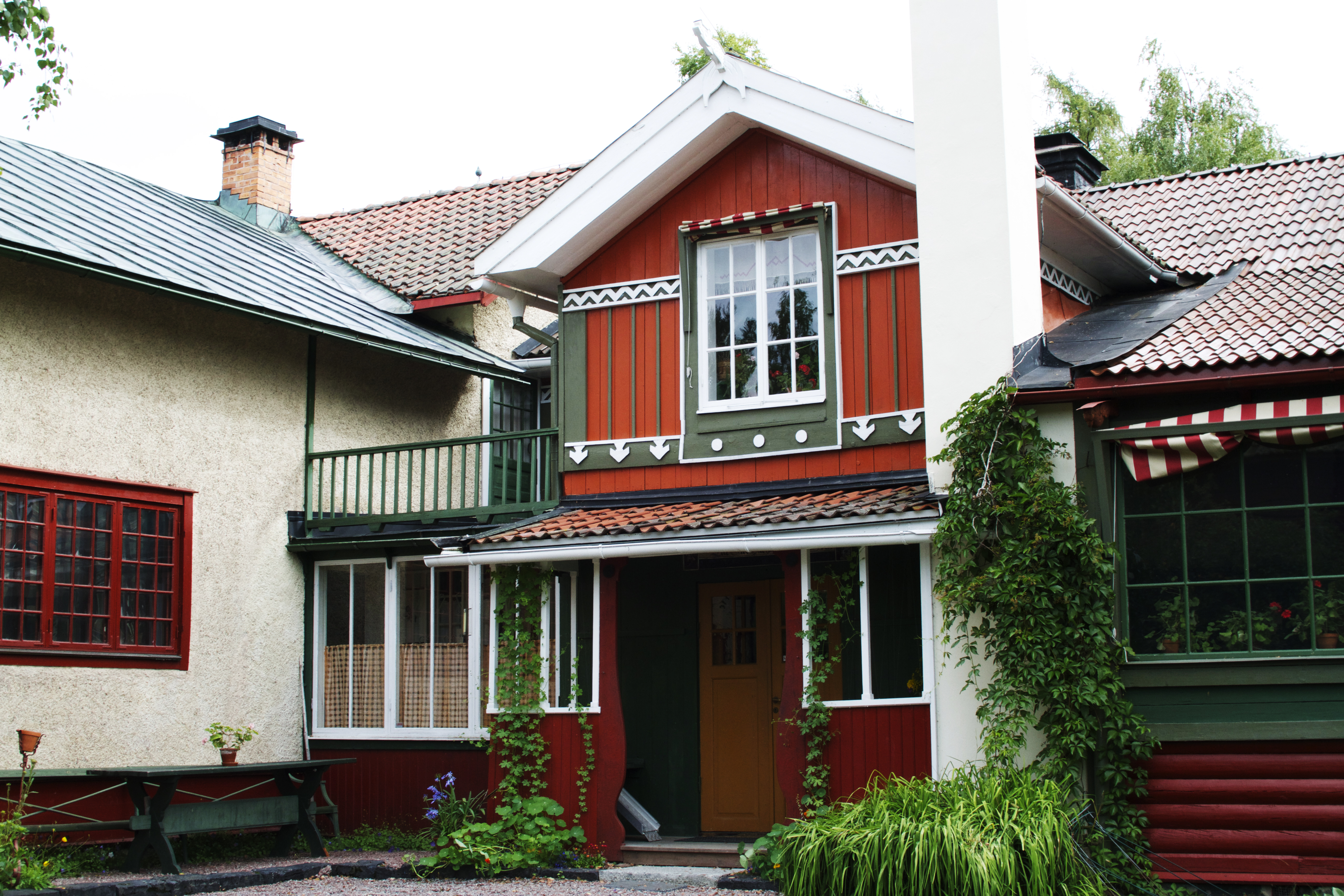 There are certain places in the world that mark your memory and change your vision of the world. Visiting Carl Larsson’s home in Sundborn, Sweden was one of those places. Sadly, when I visited a few years ago, I didn’t take great pictures, and you’re not allowed to take pictures inside. BUT! Lars contributor, Meta Coleman, captured it on a recent trip and documented some lovely details and wrote about her experience. Her story kicks off a new series called Lars Bucket List Trips where every now and again I’ll share places to add to your bucket list. Perhaps they’ll inspire you too.

As a child I had a large Carl Larsson print in my room. It was of a girl sitting in her bedroom holding a tulip. I felt very connected to that little girl and to the beautiful day to day family life painted by Carl Larsson. 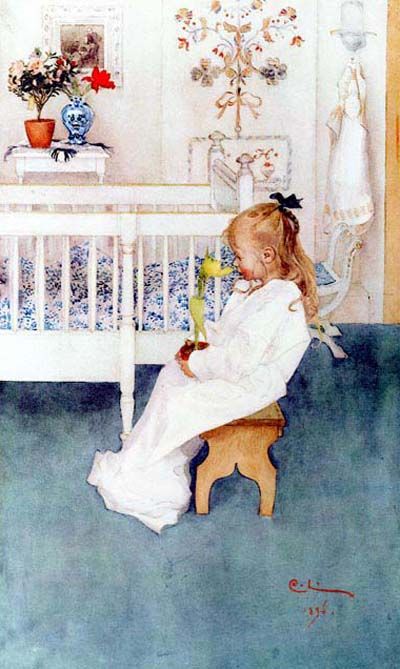 Carl Larsson was a Swedish painter born in 1853.  He was classically trained at the Royal Swedish Academy of Arts.  Later when he married Karin Bergöö he develped his arts and crafts (now iconic) style of colorful, technical watercolors, depicting their relaxed family life.  Most of his famous paintings were painted in their family summer home, Lilla Hyttnäs. 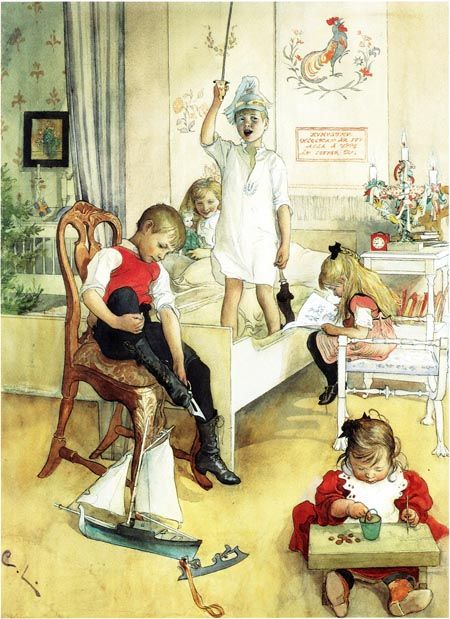 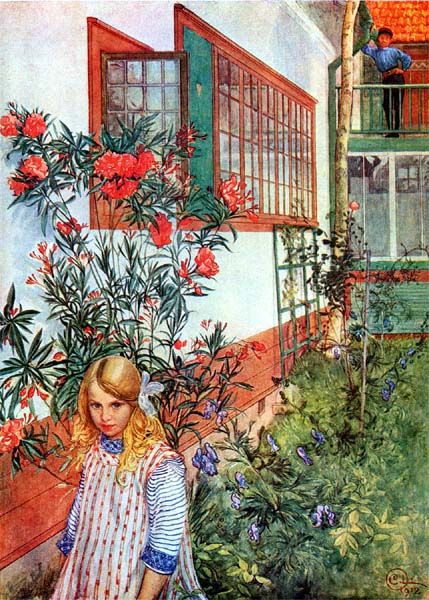 A couple of years ago while I was visiting Sweden, I had the opportunity to take the long trek from Stockholm to the home of Carl and Karin Larsson.  After traveling three and a half hours by train and two bus rides we arrived in the tiny village of Sundborn.  We then walked a short way to their home, Lilla Hyttnäs.  Arriving at the home felt very surreal to me.  I had enjoyed the home and life depicted for so many years, it was amazing to me that it actually existed.  And it was as beautiful as in Carl Larsson’s paintings.

We were given a guided tour through the house, but unfortunately couldn’t take photographs of the interior.  What also amazed me was that the Larsson family still vacation in this home for one month out of the year. 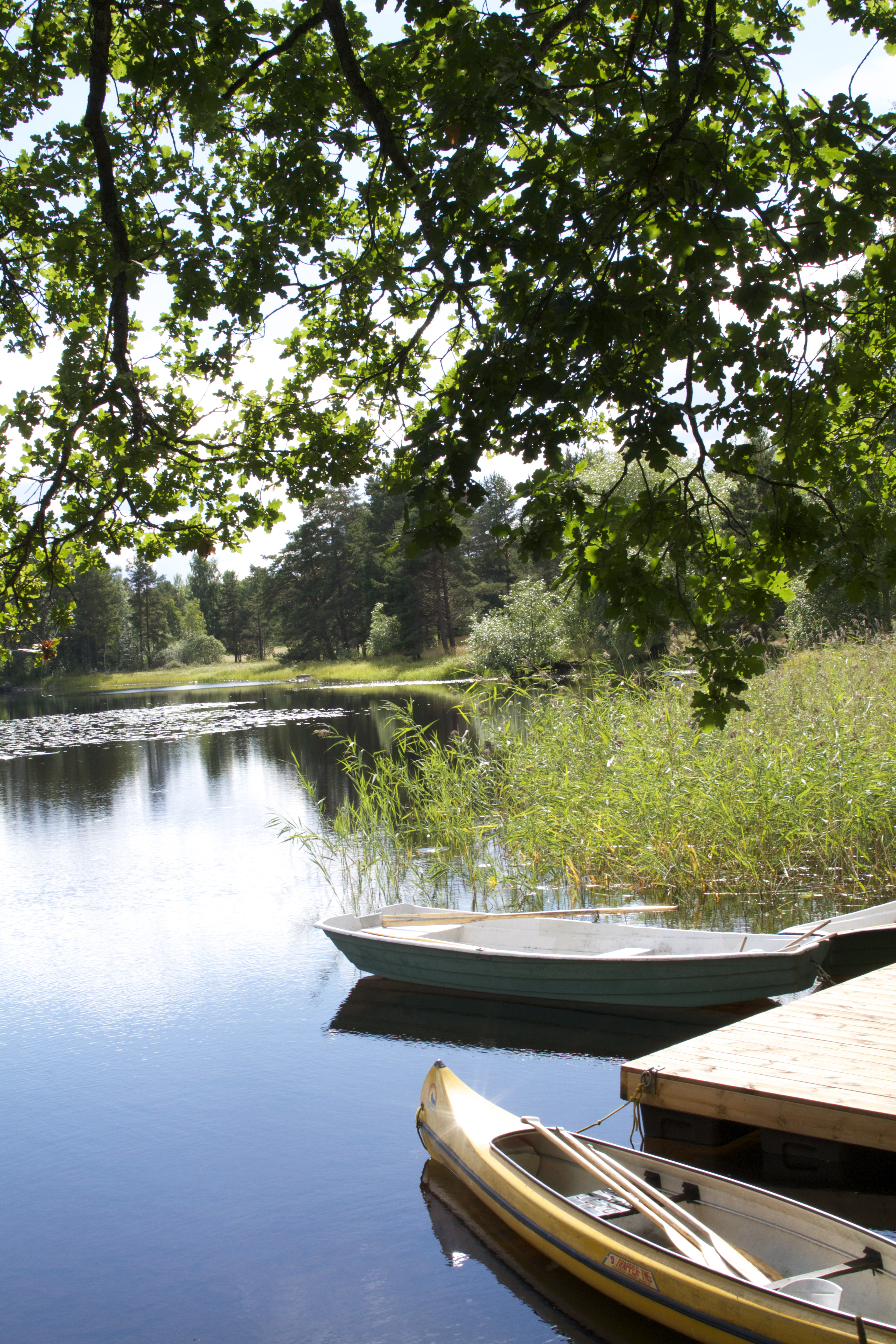 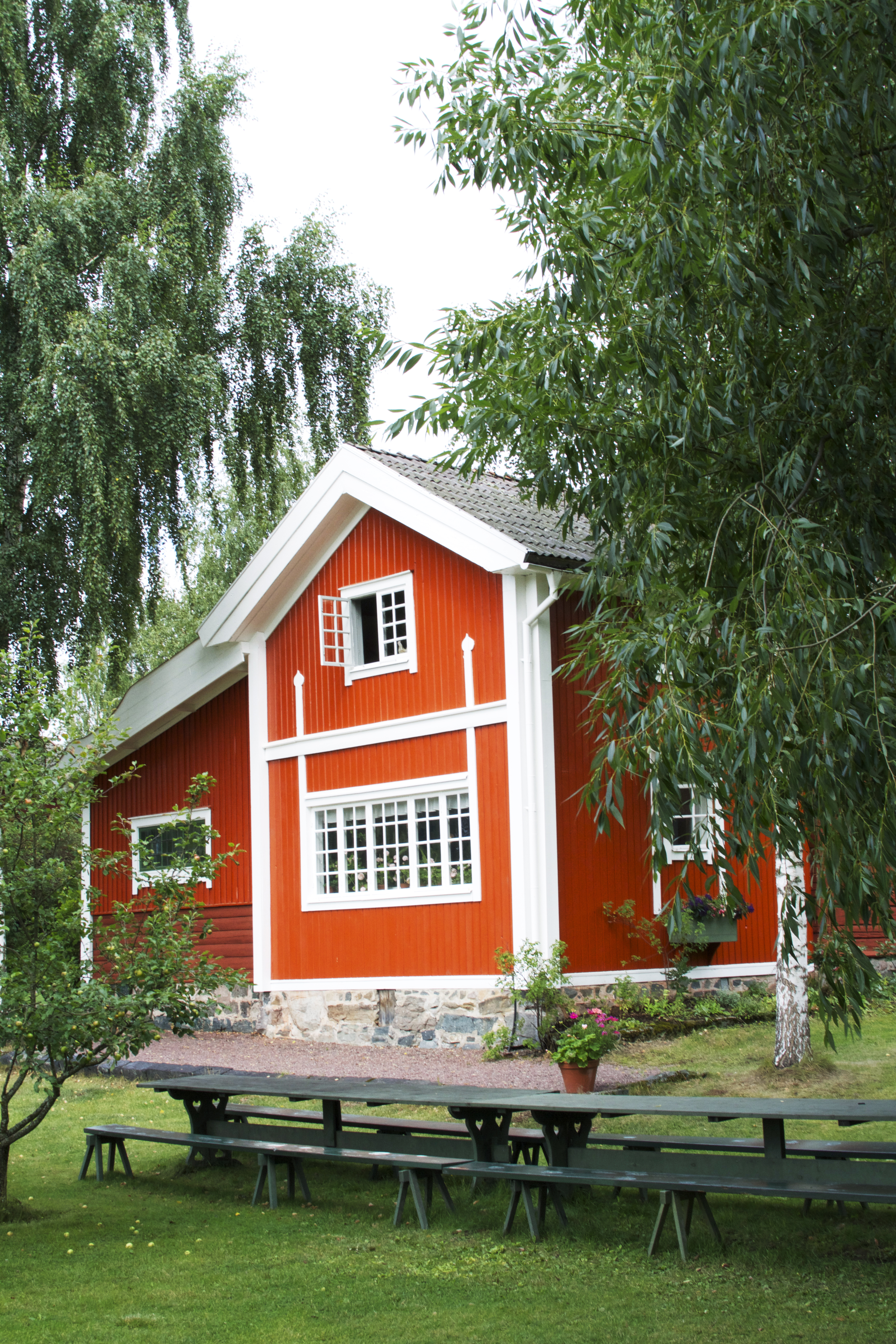 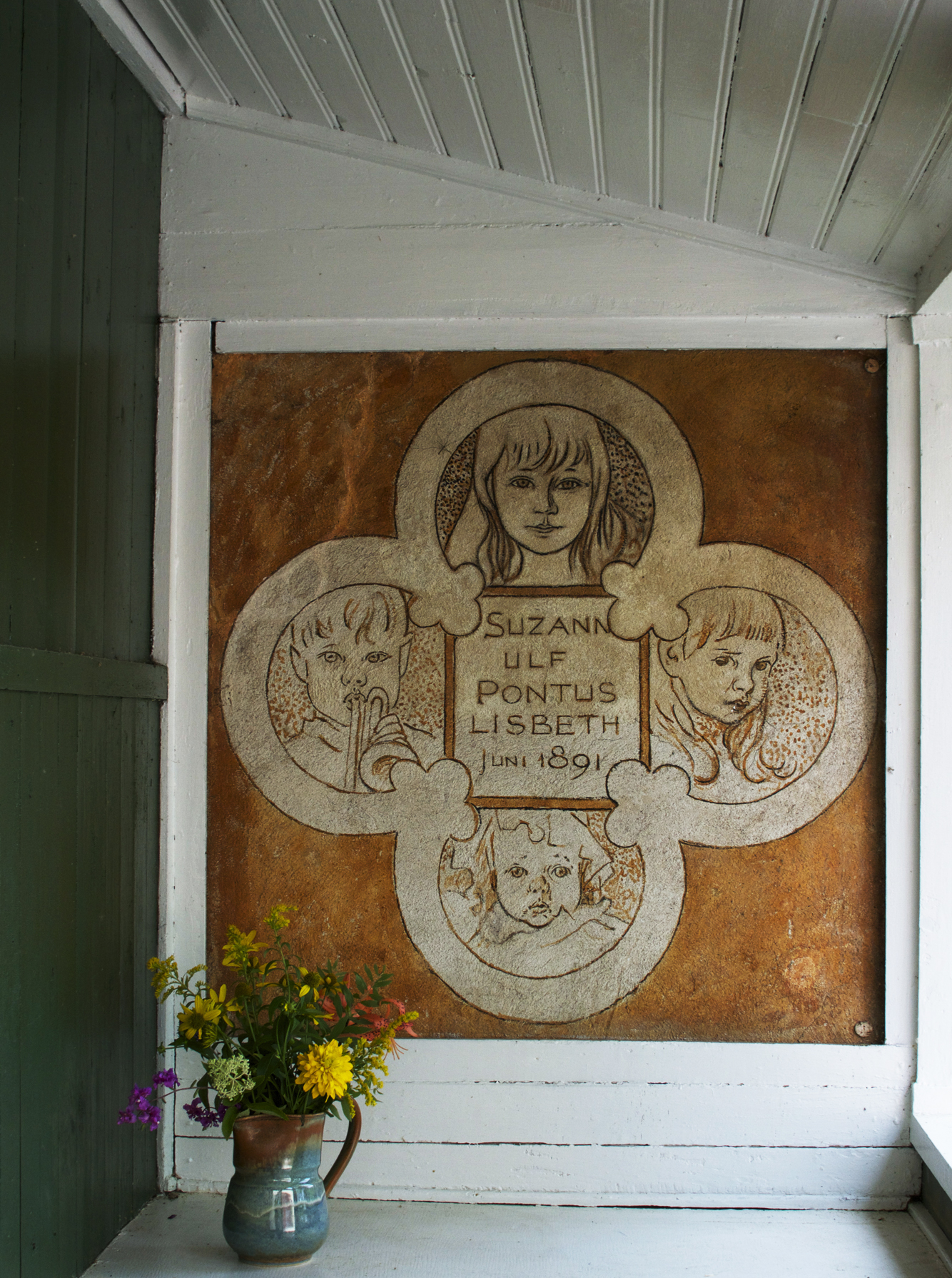 Carl and Karin were two incredibly talented, artistic people.  They surrounded themselves in their art and what they loved. Throughout the home there are textiles, rugs, table clothes, doorway curtains all made by Karin. While Carl painted mural decorations, portraits of members of the family, and carved and painted the furniture. They personalized their home with their art and made it an expression of themselves, free of formality and the stuffiness of the time. 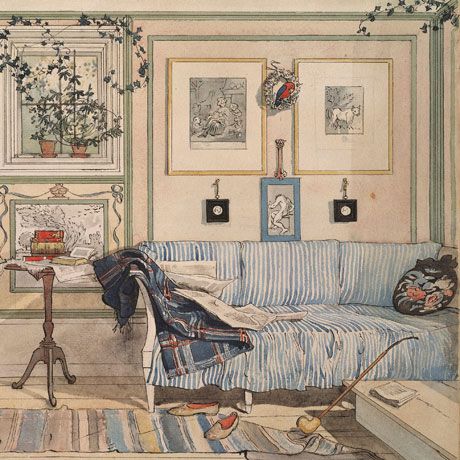 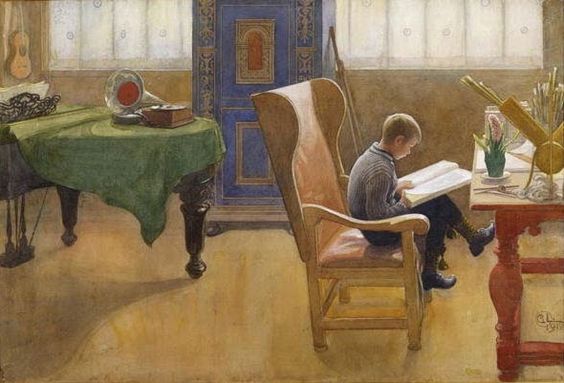 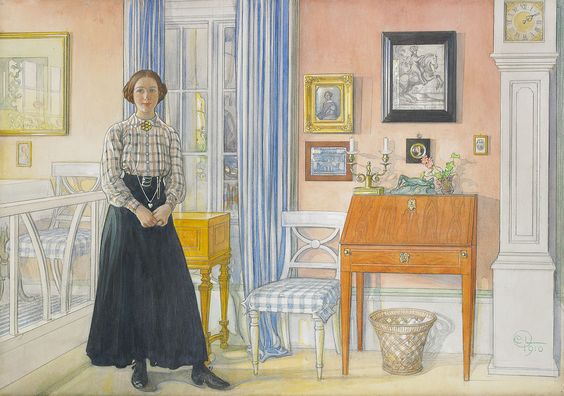 Karin Larsson was an amazing artist in her own right.  She designed and wove the most beautiful, colorful, and modern tapestries all throughout the home, as well as designed and sewed all their (including eight children’s) clothing, and painted and designed furniture too.  One time Karin commissioned a local carpenter to make her a rocking chair.  The carpenter was so ashamed of the chair (because it was so different from the ornate furnishings of the time) that he delivered it in the middle of the night so that no one would see what he had made. 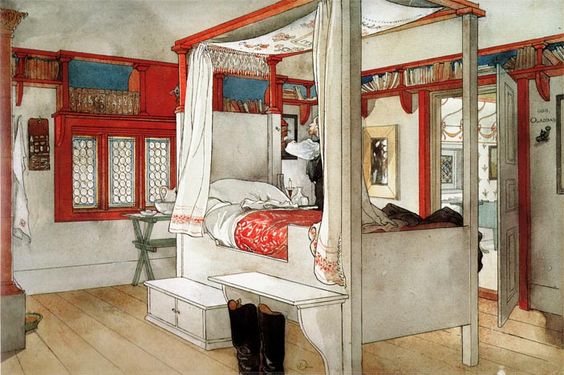 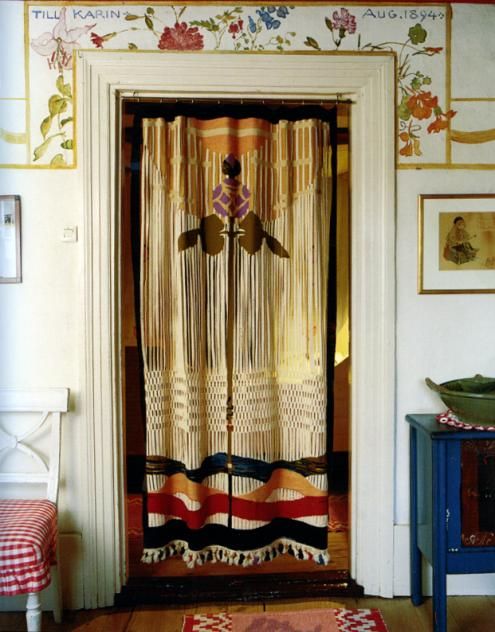 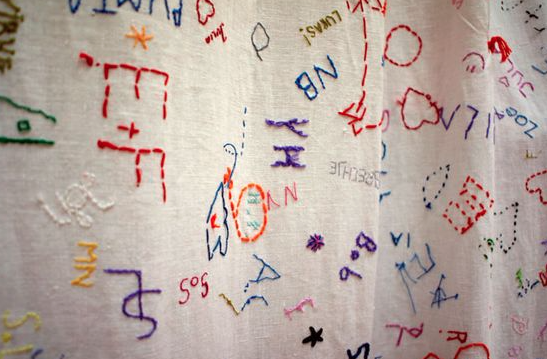 The guest book was an embroidery curtain.  Image via Dos Family.

The Larsson’s were way ahead of their time, so modern in every way.  They had a much more relaxed approach to raising their children and even ate together as a family, which was unheard of at the time. I like to think they were thought of as the odd eccentric family that were never truly understood. 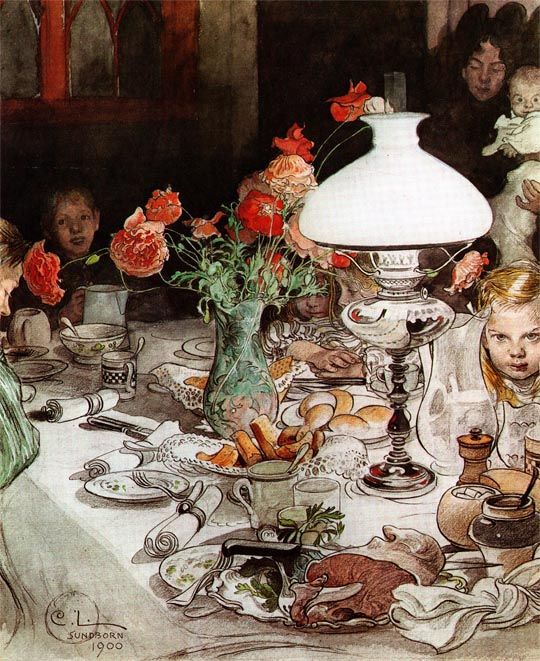 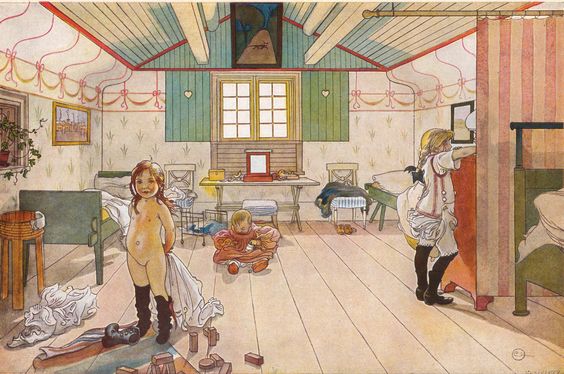 Their home is such a beautiful mix of both artists.  There are murals of Karin and the children on several of the doors as well as the furniture and in the dinning room.  The chairs are painted a variety of different colors upholstered in Karin’s beautiful tapestries, as well as woven curtains and pillows.  Both artists added their love and personal touches to the home.  Exactly how a home should be. 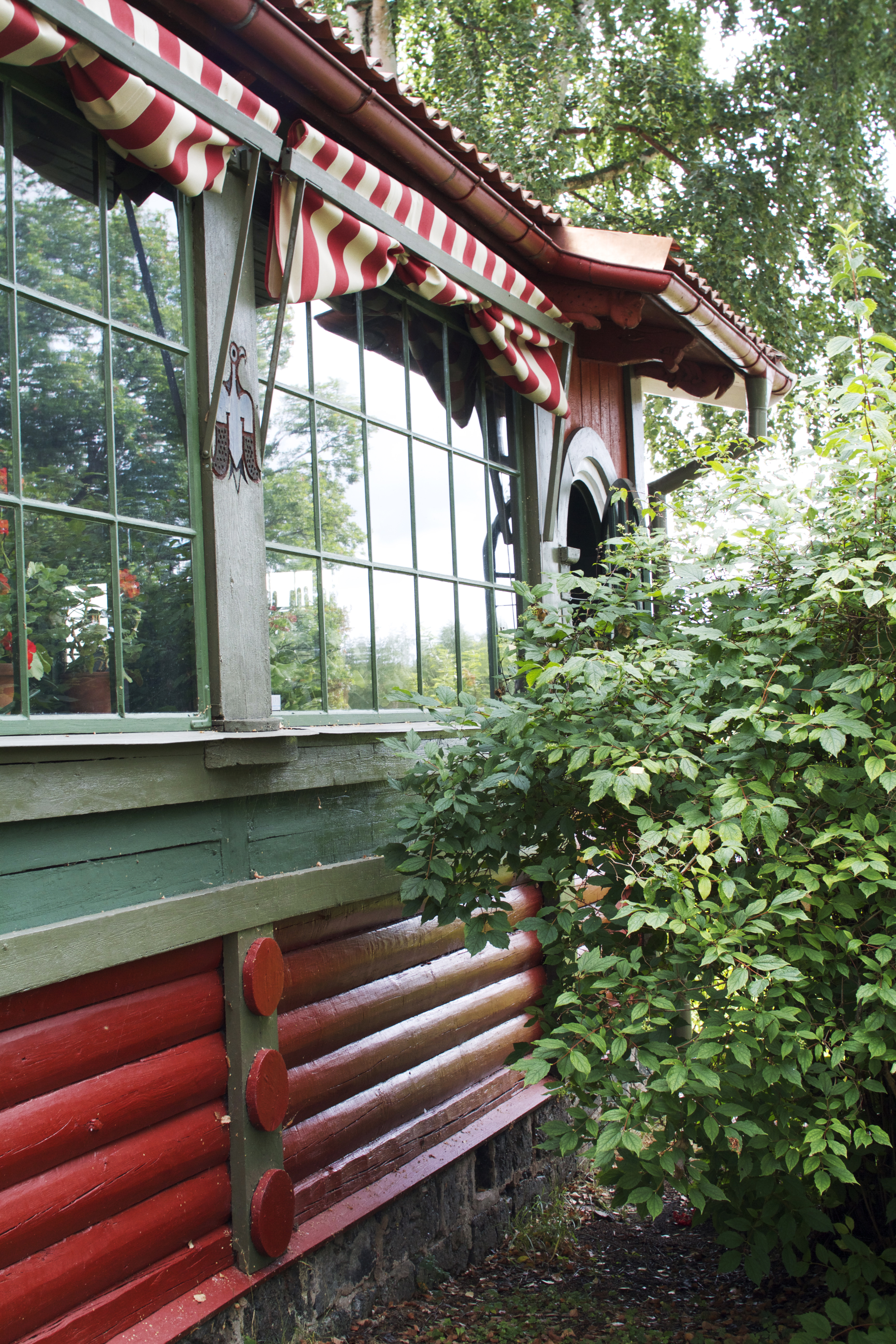 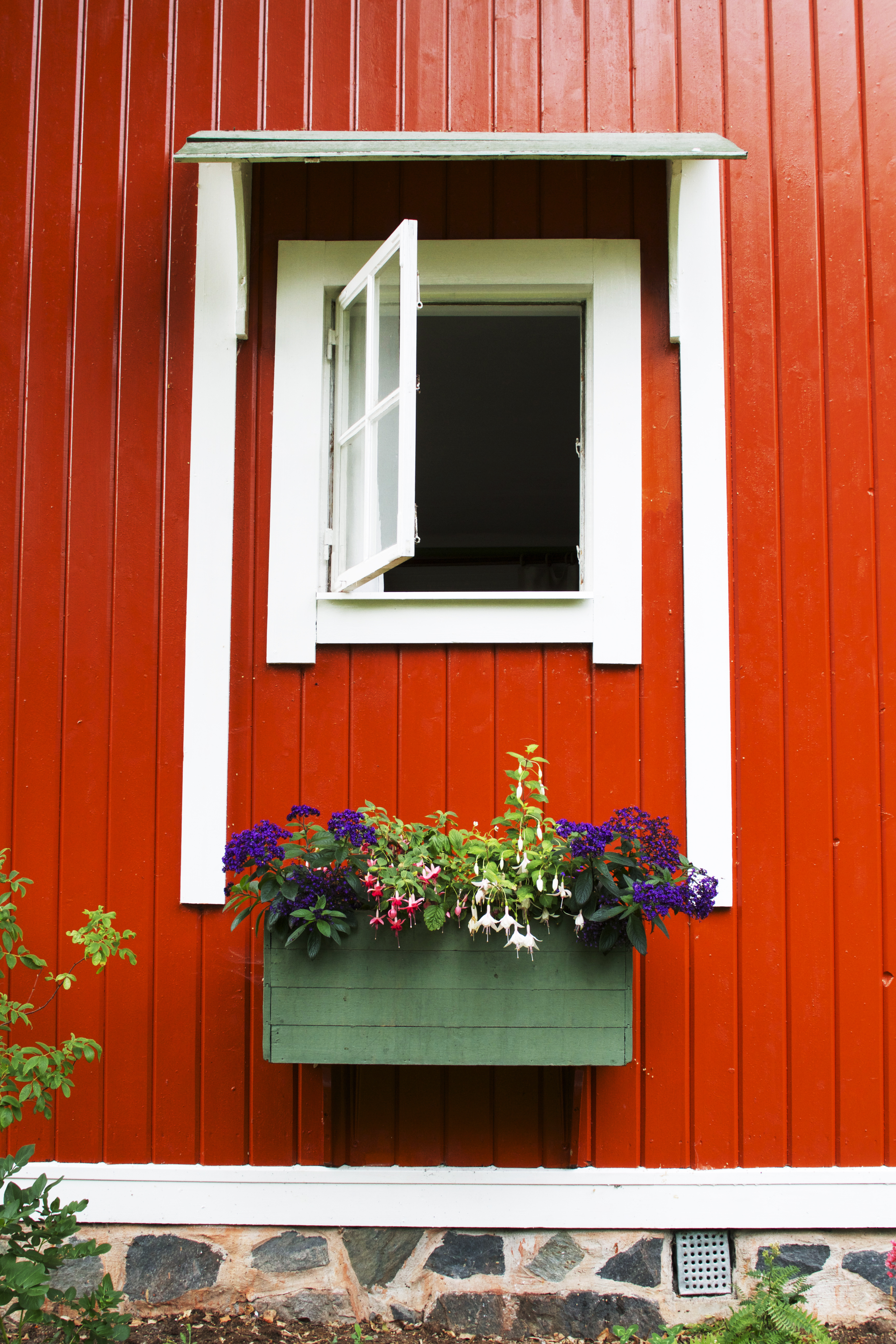 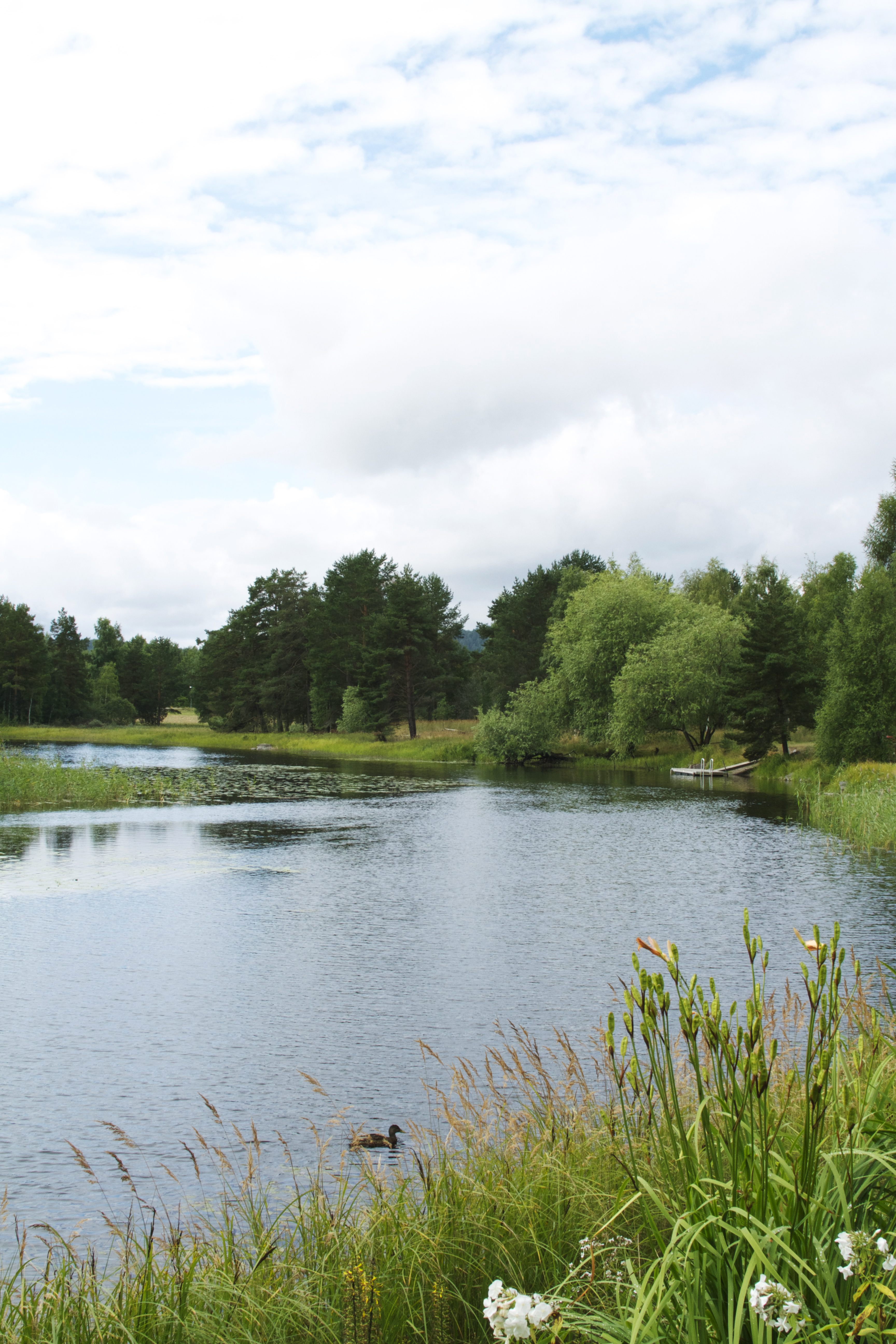 The Larsson home and their approach to living art in all aspects of their lives is such an inspiration to me and I aspire to be like them.

Thanksgiving table ideas for kids I'm a big fan of the kid's table for Thanksgiving and I love the idea of making it a celebration...
Read more

How to Make Your Own DIY Roman Shades It turns out making your own DIY Roman shades isn’t as tricky as it seems. All you...
Read more