Our new blinds from blinds.com

The studio space I share with a few other creatives is located on a dairy farm (for reals—there are hundreds of cows on the property) and our building used to be a farmer’s co-op. When we first discovered the space a few years ago it hadn’t been occupied in a number of years and it felt that way too. It was dusty and crowded with old industrial furniture. It needed a LOT of TLC and it took about a year of renovations to do it. Here are the before and after pictures.

I’ve been in the space for nearly a year now and there have been a number of items that I’ve needed to take in order for it to feel comfortable and workable because for awhile I was feeling the harshness that comes with such a space. For example, in the winter the sun wasn’t as much as a problem. In fact, we welcomed it in because Utah can get quit cold. However, once summer set in I knew we would be in trouble especially since the windows in our office are south facing. You see, our space didn’t have any form of window treatments and turns out window treatments are important. Ha! I knew we could get some simple curtains to do the job in a pinch, but I thought that for all of our needs we would probably need something more functional and durable. Something that could withstand the more industrial demands of the environment.

I researched a number of companies to work with to install some blinds and ultimately decided on blinds.com because they had the variety I needed and it seemed like they placed a high emphasis on customer service. AND I WAS RIGHT. Even from the initial email I knew we would be in good hands. They took such good care of our of us and listened to our needs and went above and beyond the call of duty. I suppose it could be because they were going to be mentioned in a blog post (not surprisingly, it seems to propel people to be on their best behavior…for the most part), but everyone I worked with was so great to work with and really wanted to make sure that we got the best treatment for our needs. 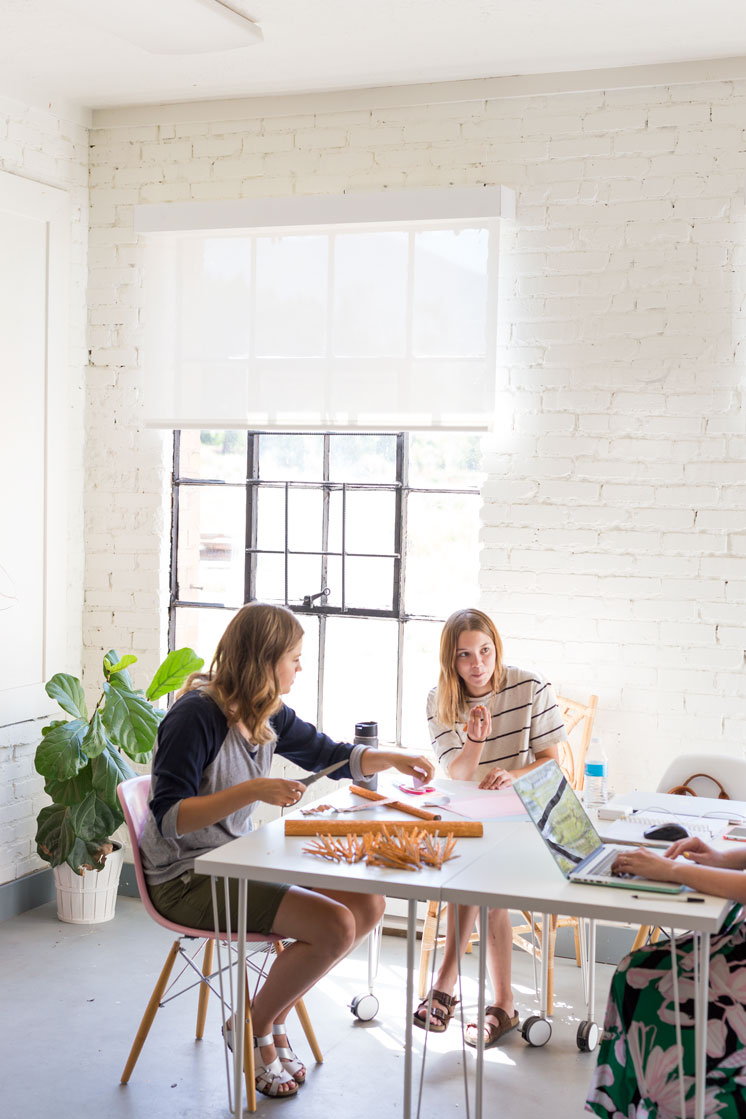 On the other hand, I need a TON of light for the majority of our shooting of our projects for the blog and just general well-being. I LOVE light! But turns out, direct sunlight isn’t always desirable. I didn’t realize how much I needed the ability to control the light. At noon it’s often so direct that we can’t shoot because there’s too much direct sunlight in the space. That’s a problem.

After talking it over with the blinds.com experts, they suggested I go with a dual shade solar system—one sheer roller shade with their and the other their Signature Blackout Roller Shade. That sounded even better than what I had envisioned! That would give me the ability to allow light in with the sheer screen, which would also be perfect for shooting, but also have the ability to get the entire space dark for shooting stop motions and our viewing parties. Score! 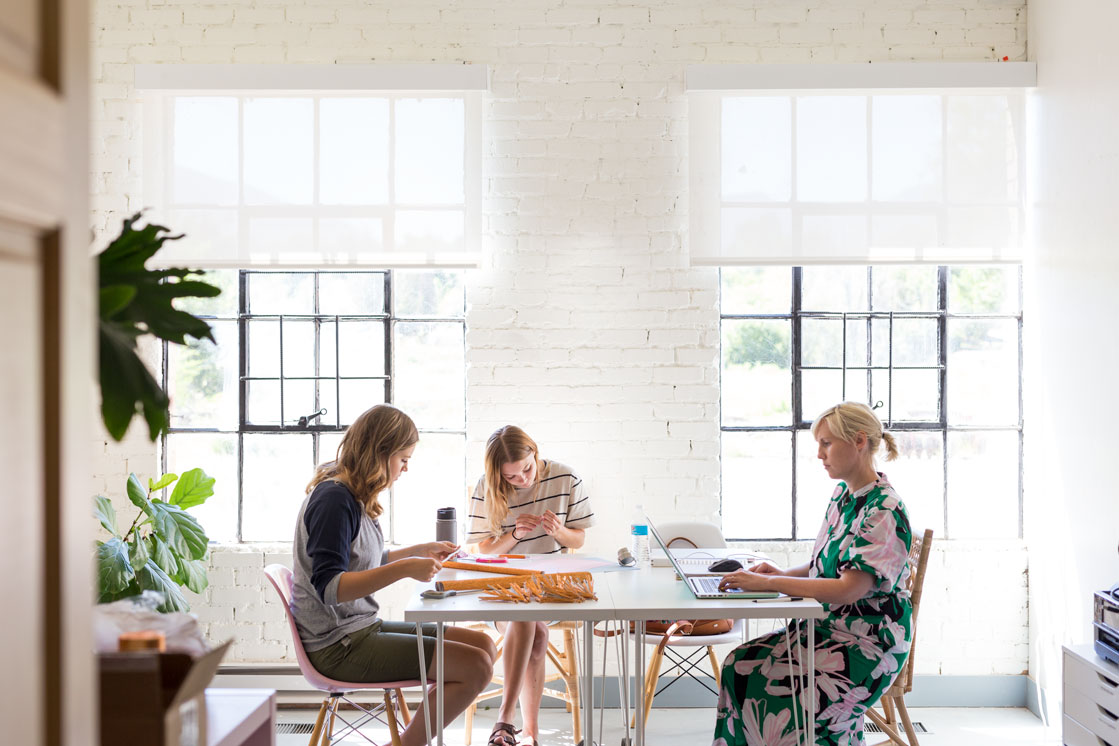 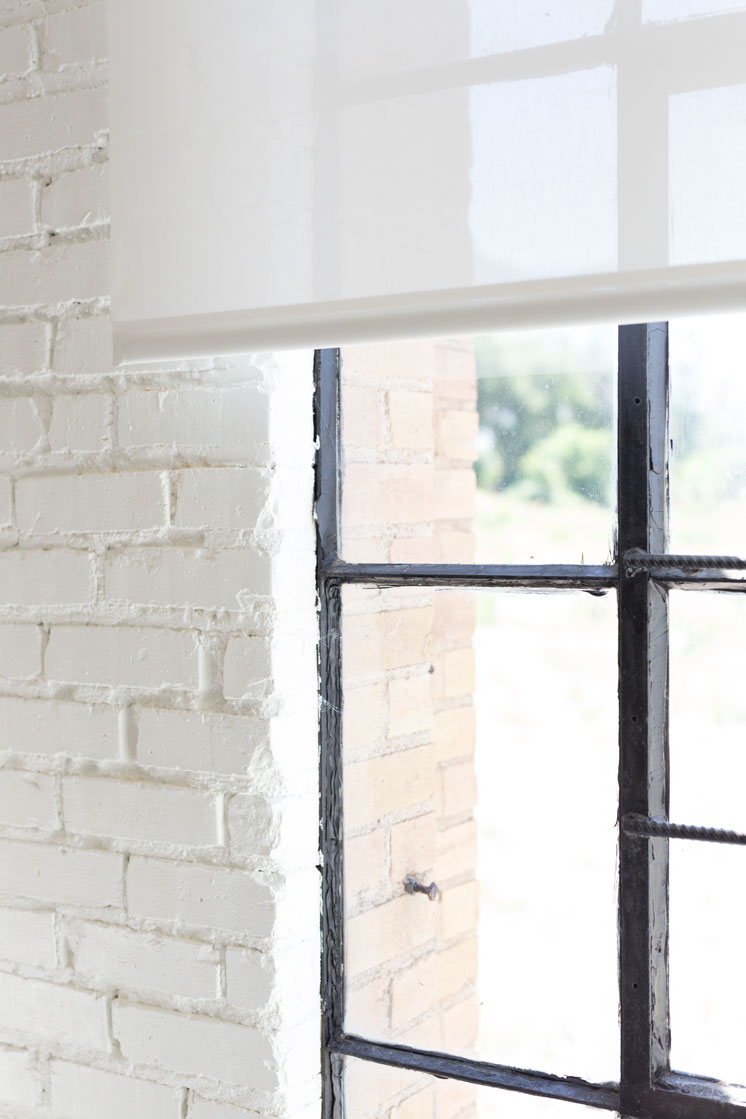 I recalled the blackout shade system in the movie The Holiday (I’d show a clip but if you type in “shades” you just get 50 Shades of Grey) when Kate Winslet accidentally discovers that the shades to her room in Cameron Diaz’ house come down to pitch black. I remember thinking “man, that would be nice” and to think that it was going to happen to our studio was a real thriller. Seriously!

We got down to business my measuring our windows, which are a bit odd in dimensions because they are old and a tiny wonky. We knew that the window treatments would have to be installed on the outside of the windows. The windows are so old that there’s not a frame to place them in. I was worried about it until the installers came and worked their magic and found that I didn’t mind the look at all. In fact, it created a nice frame to them. 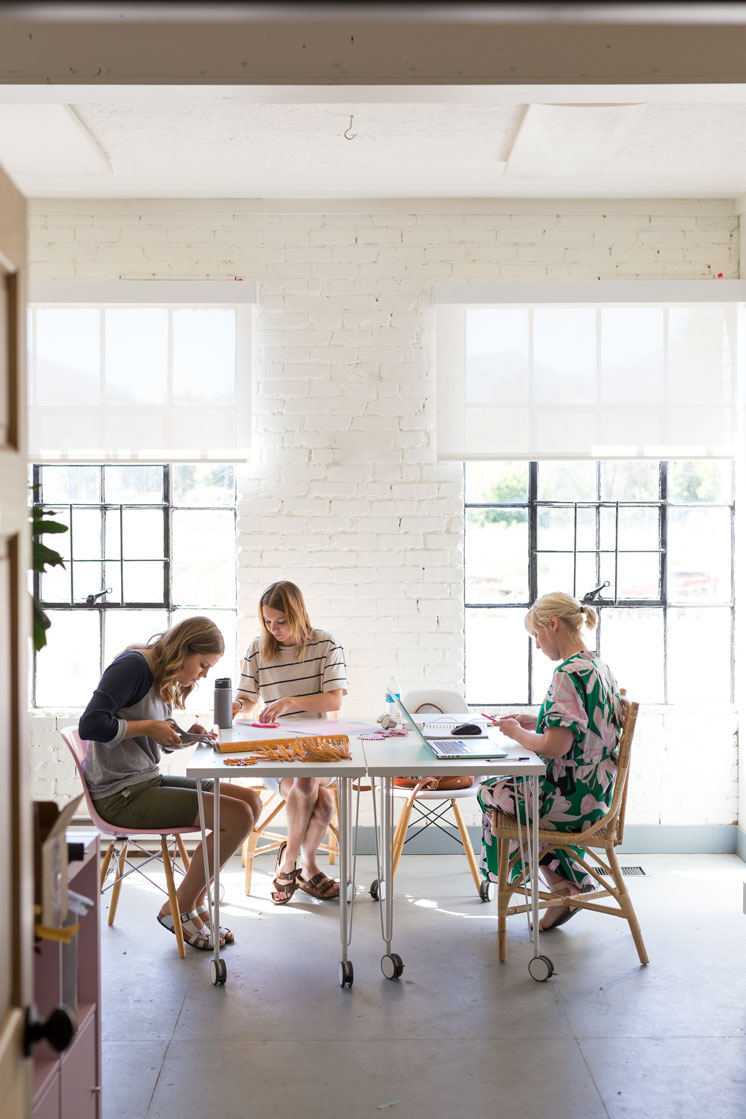 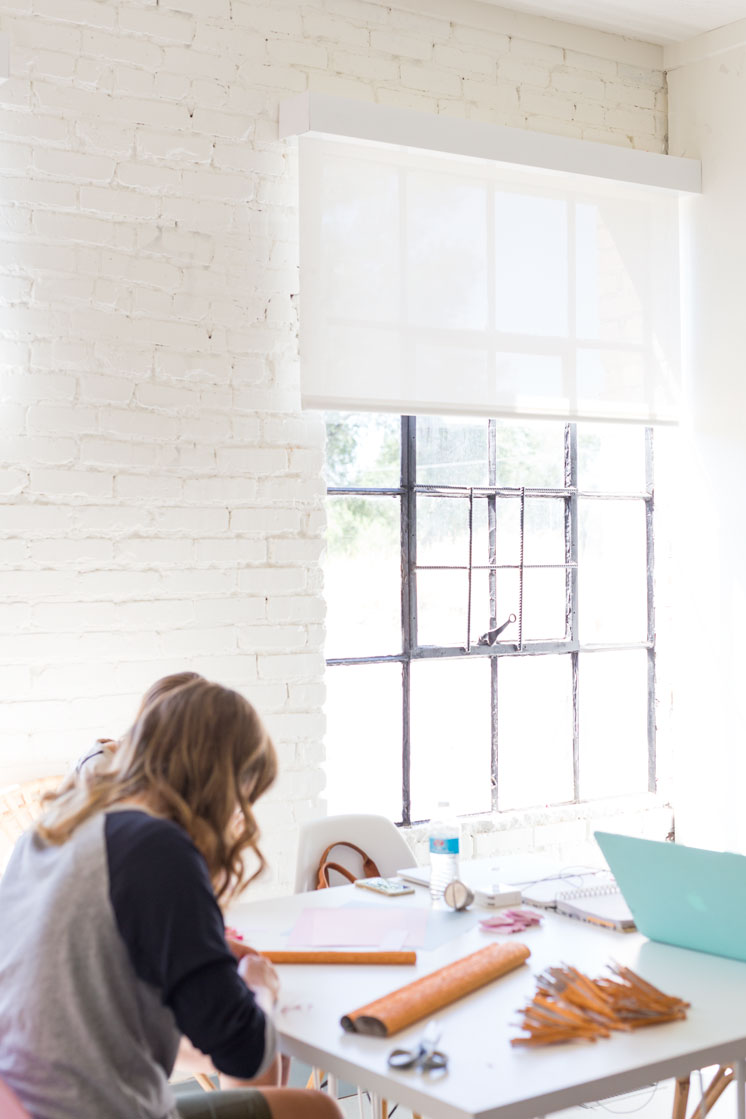 Additionally, the window treatments are set on a solar system so they get their energy from the sun. It’s also required that they have batteries too. I’ve been told that they need to be changed out regularly, but we’ve had ours installed for a few months now and so far so good.

The installers gave us our remotes to control the shades and customized it to our needs. I put every shade on a different track in my office so that we could roll one up and one down if we desire. It’s so fancy, guys. 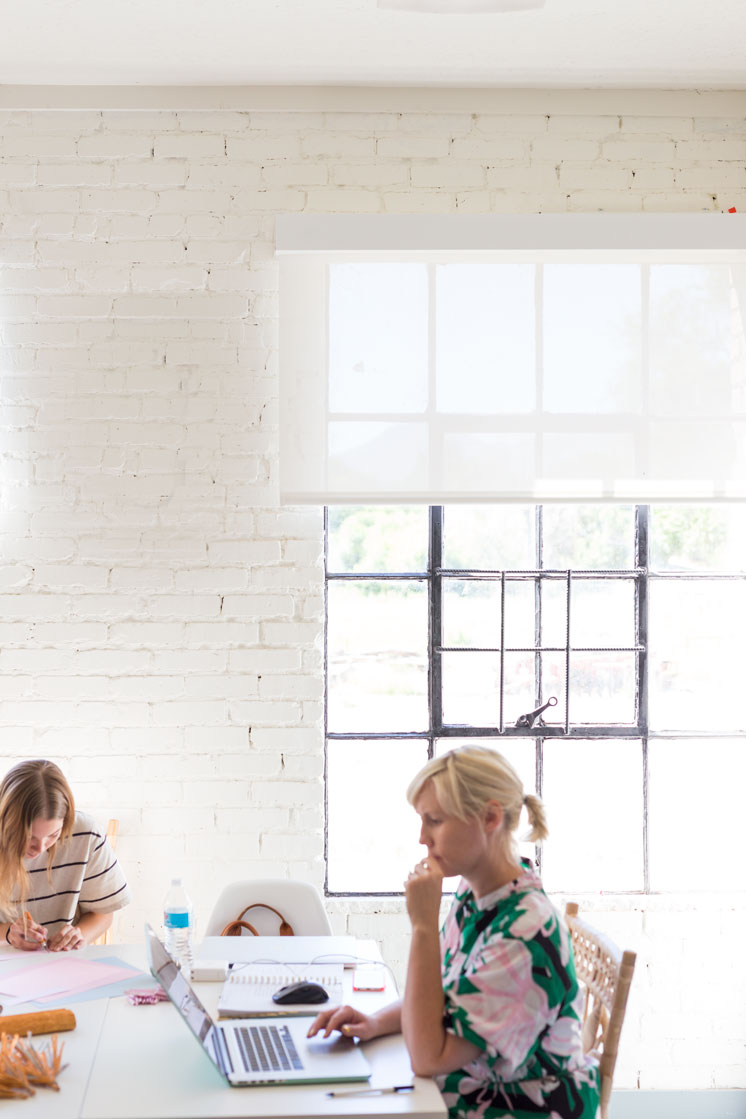 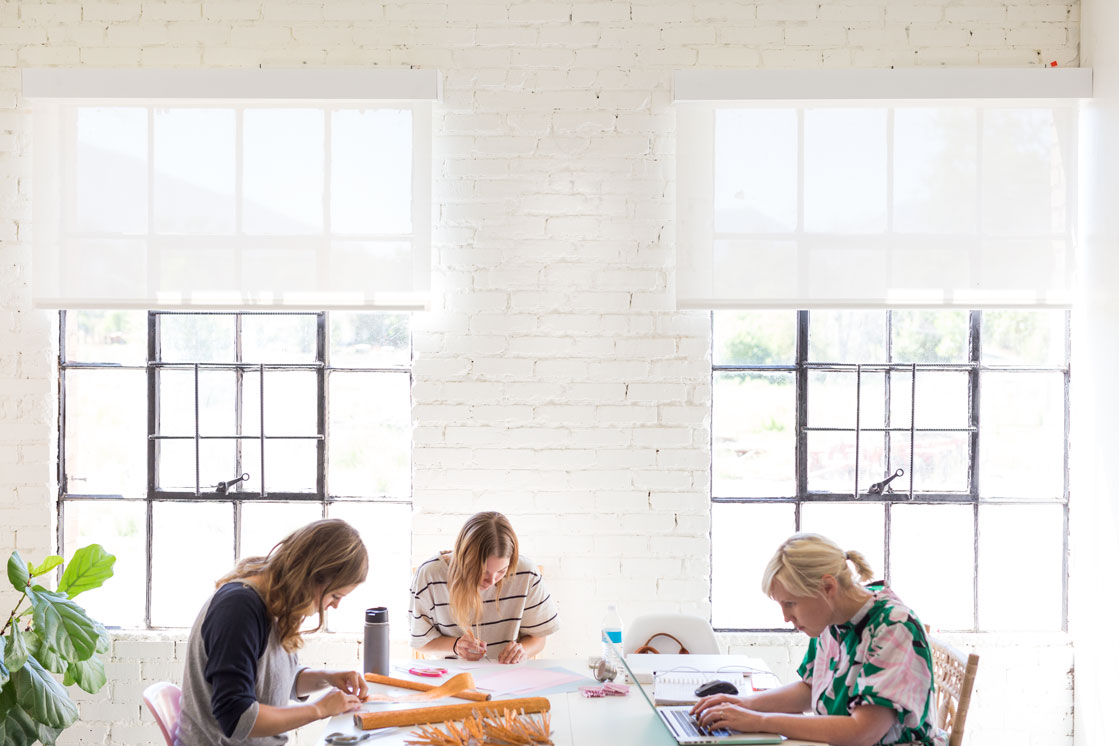 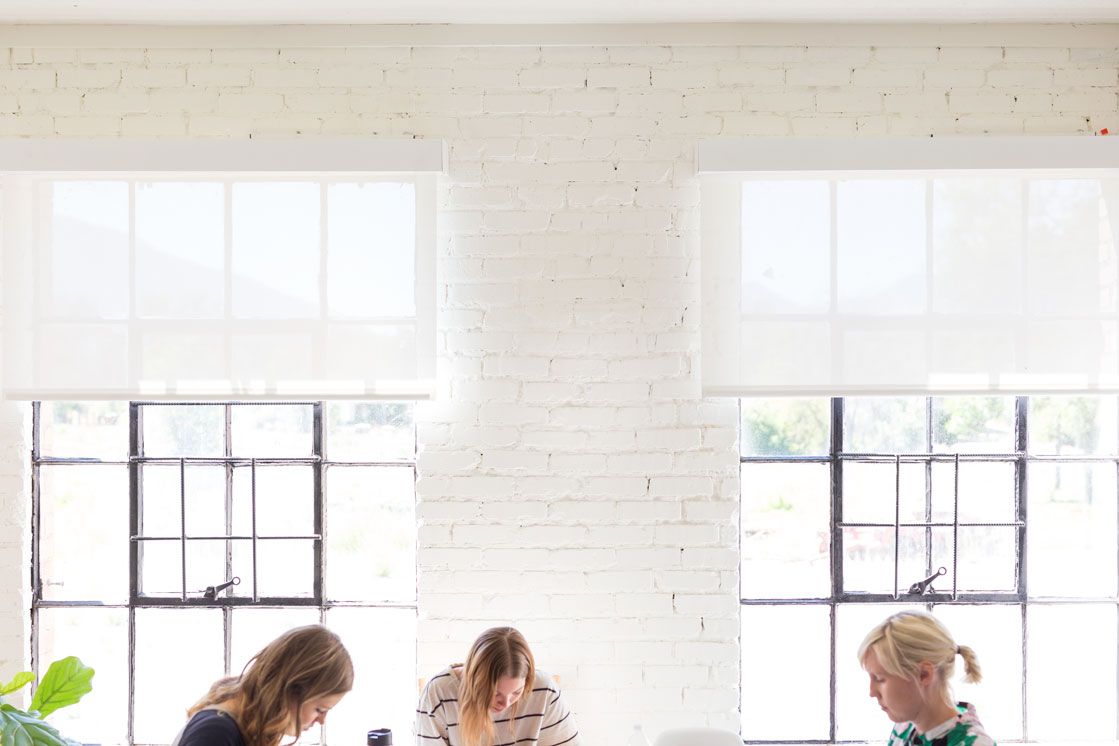 These are the shades in the main work room. All of us who share the space take turns renting it out so we don’t use it as often but this is where we hold workshops, classes, and viewing parties. 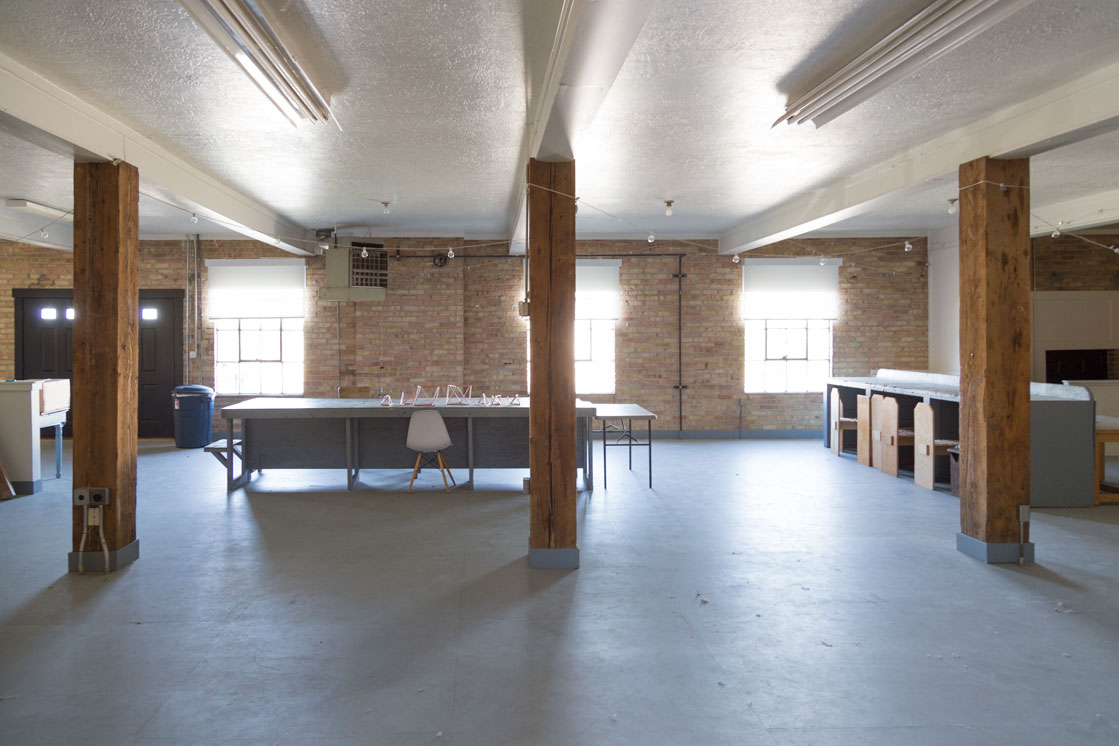 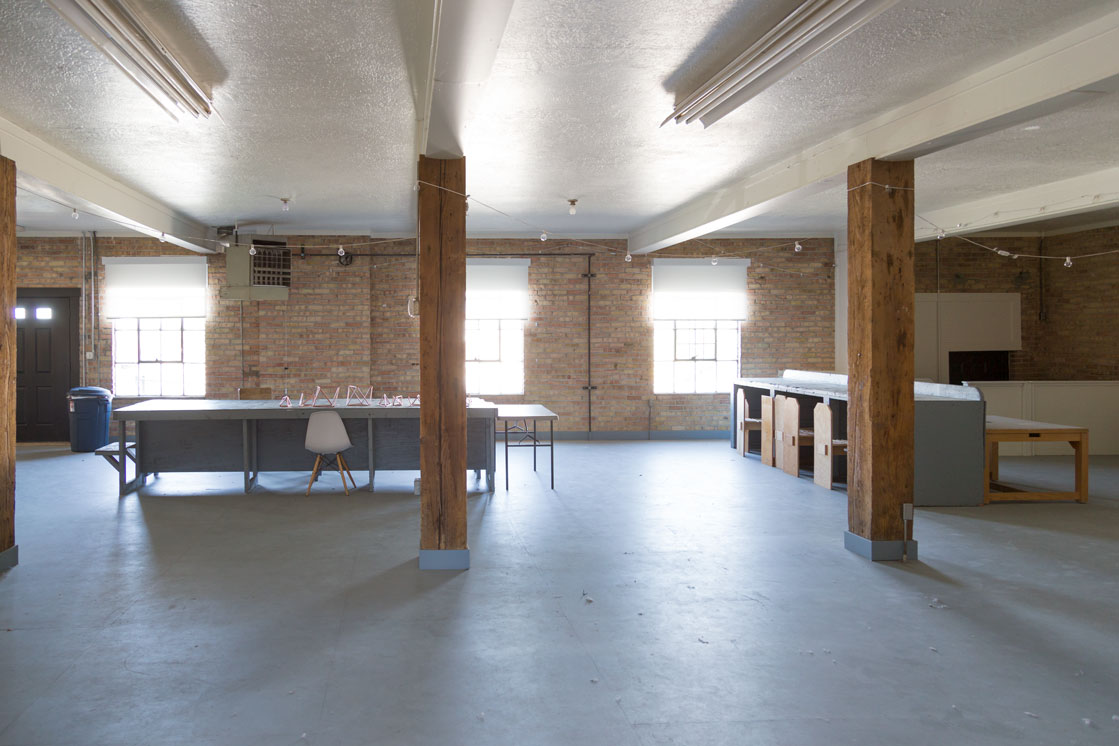 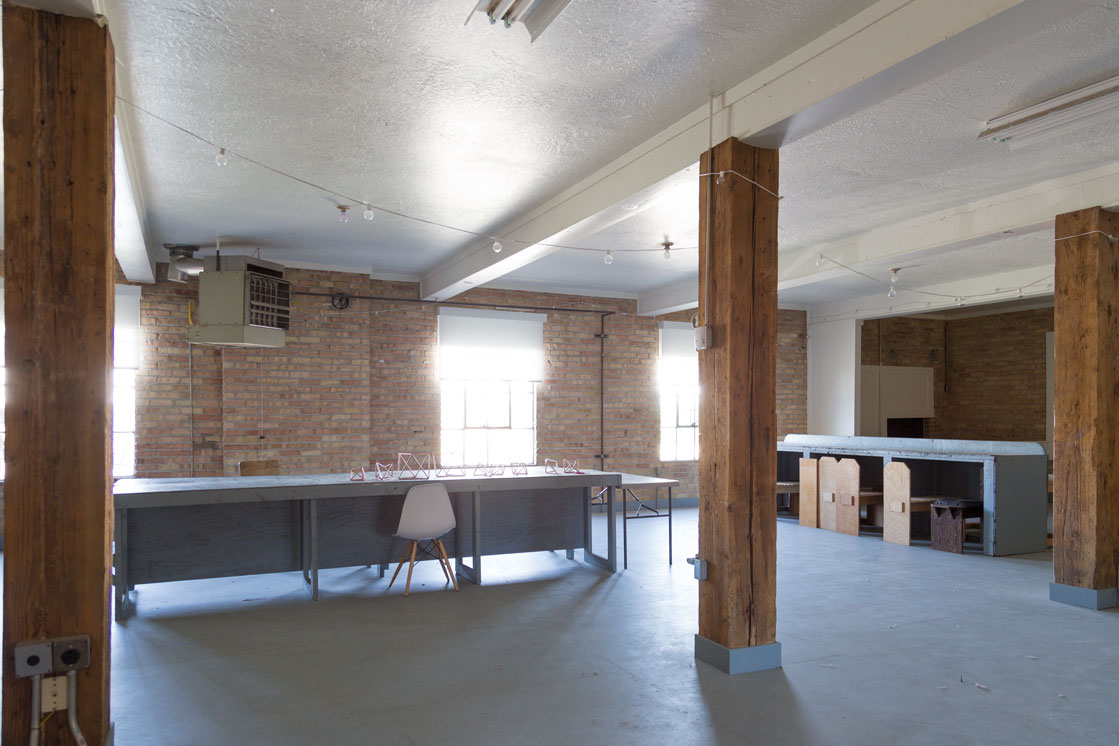 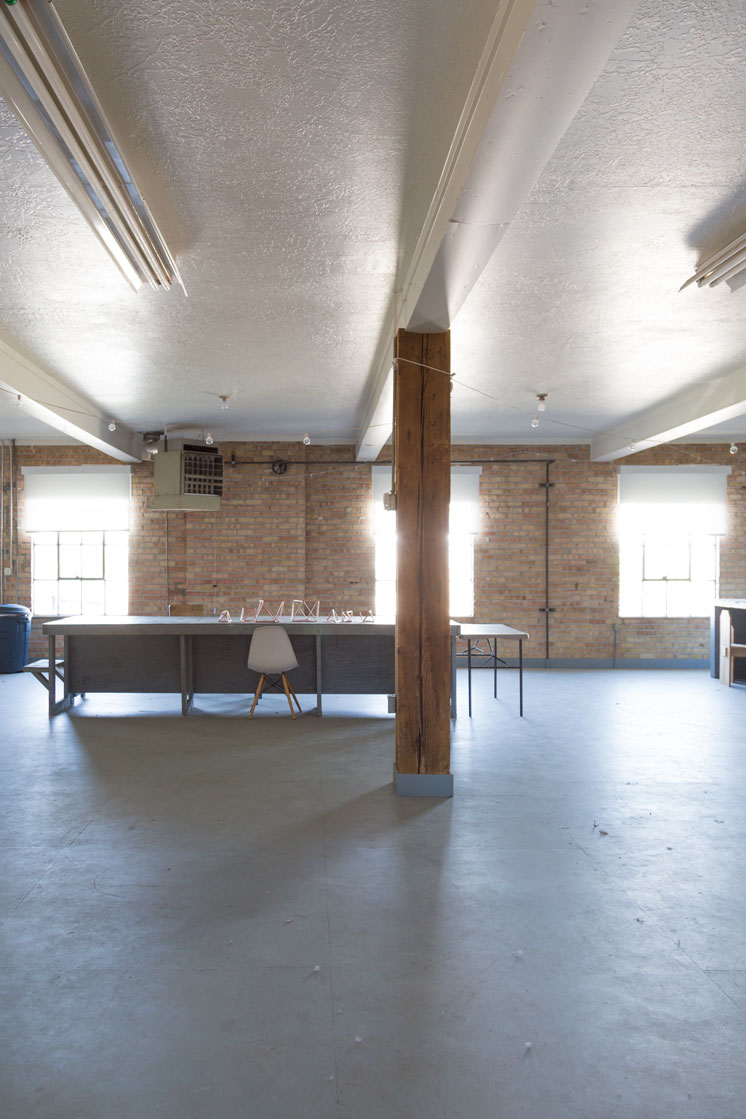 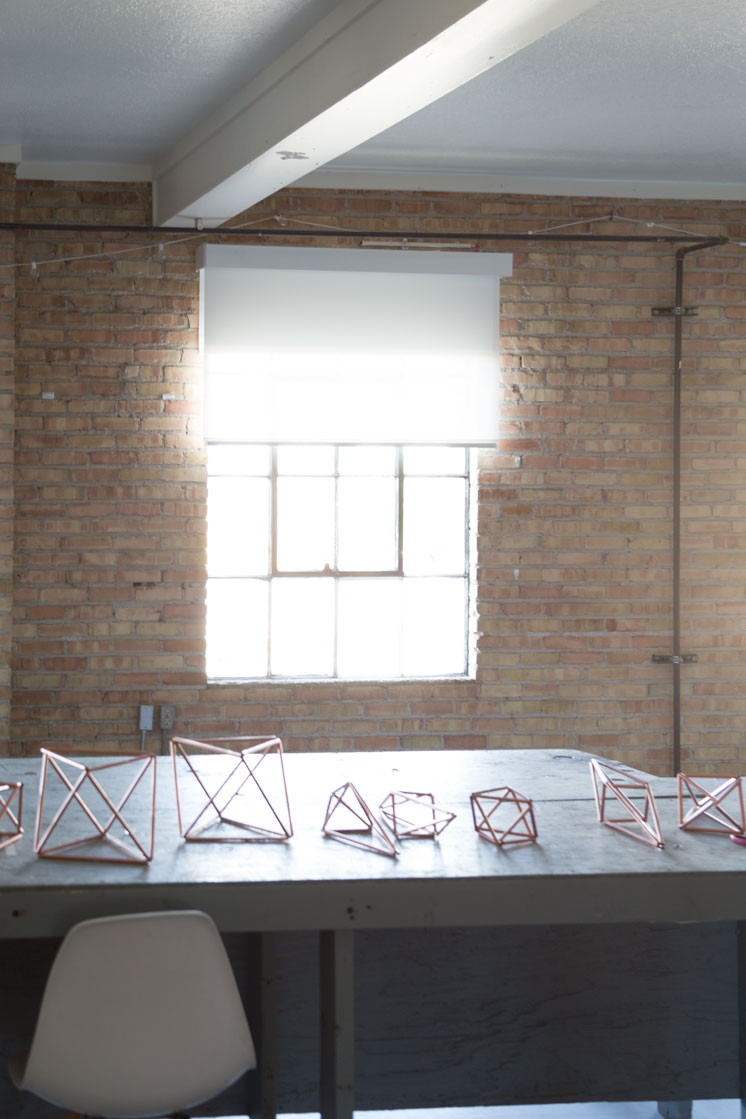 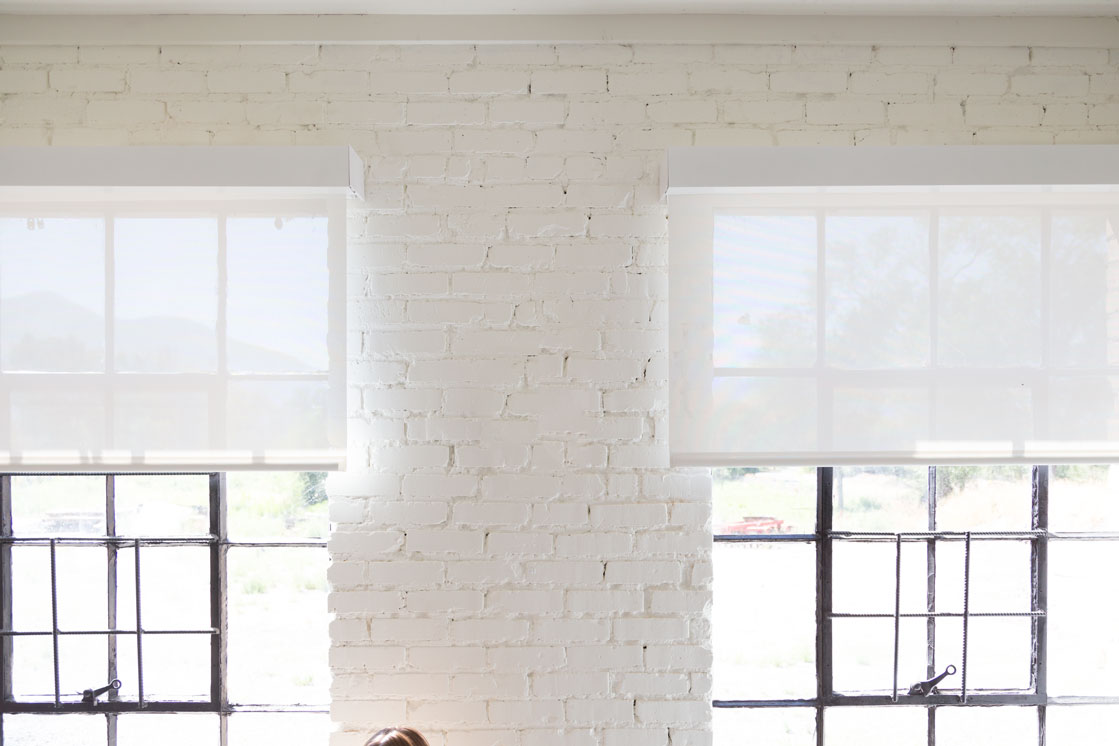 I’m absolutely thrilled with how our blinds turned out and couldn’t recommend blinds.com anymore. Yes, this project is totally sponsored, but I’d work with them in an instant regardless. We weren’t required to make a video for this project but we love our blinds so much that we just had to show how excited we are about them.

This post is sponsored by blinds.com. Thanks to the brands that allow us to create unique and original content for you!