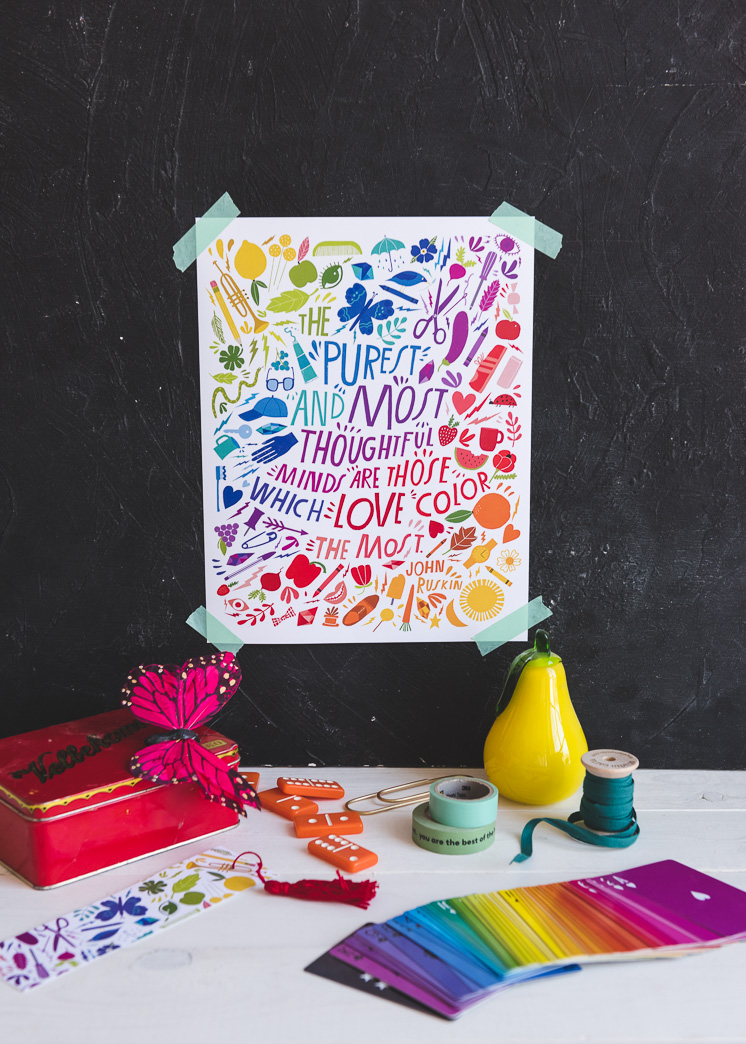 We shamelessly chose Craft the Rainbow as this month’s book club book. How could we not?! It’s a pretty great book if you ask me. The cherry on top? Illustrator and artist extraordinaire, Lisa Congdon created the book art print! It’s amazing, no? “The purest and most thoughtful minds are those which love color the most” by John Ruskin. Words to live by! Lisa Congdon is also quoted in the pink chapter of the book so you’ll have to check it out!

Since the virtual book tour has come to a close, the launch party is over, and you can now all get your hands on a copy, we wanted to talk about some of our favorite projects within the book. Each of these projects has a story behind its creation and some of them make for great stories though at the time I wasn’t laughing so much. Ha! Turns out, the making of a book, especially 40 full crafts and scenes, is a lot of work and a lot of logistical organization so there were a few hiccups along the way. Let’s check them out! 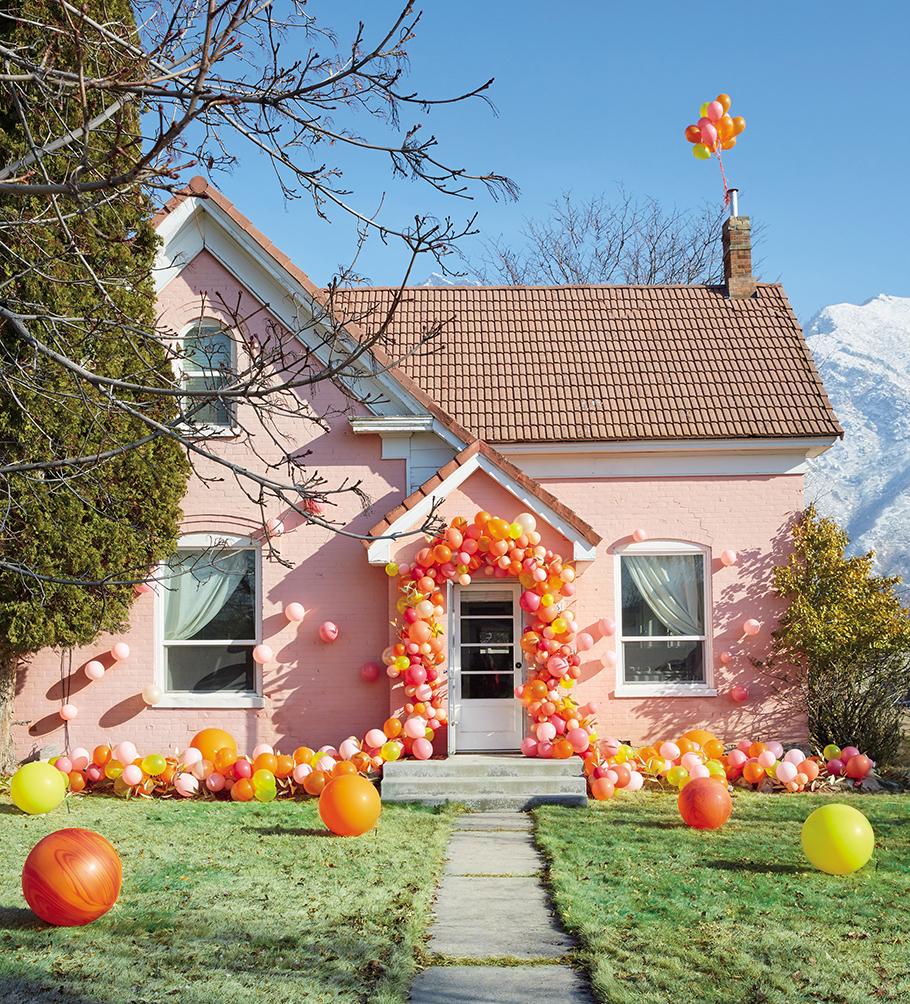 Get the free Craft the Rainbow bookmark download on the next page! 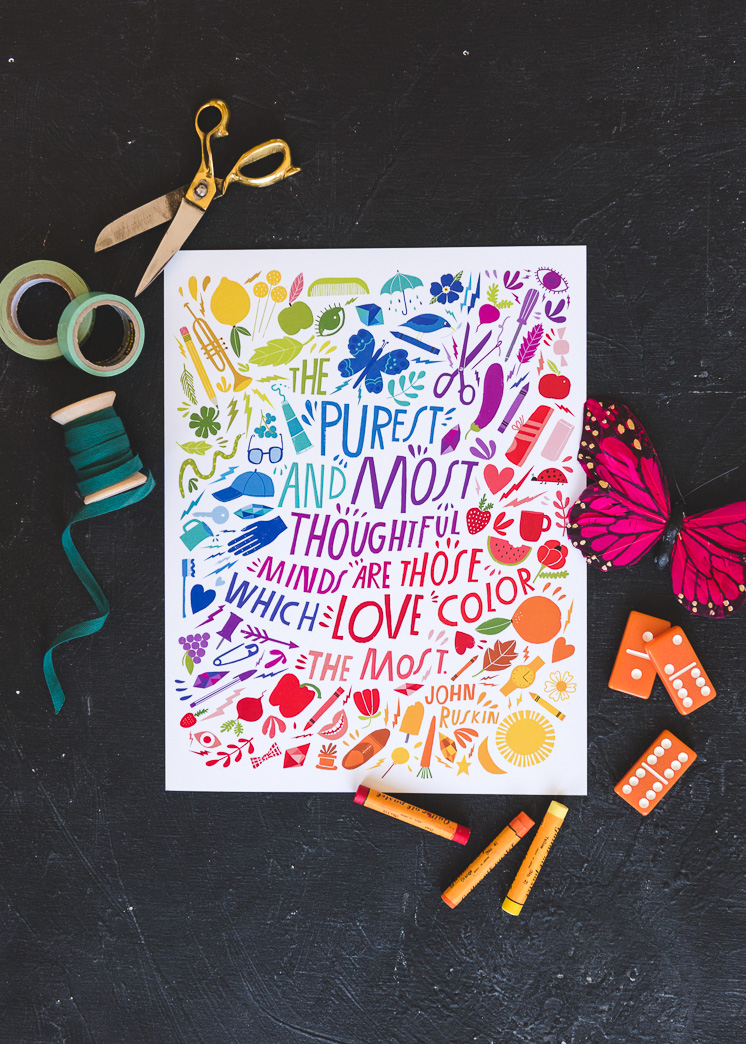 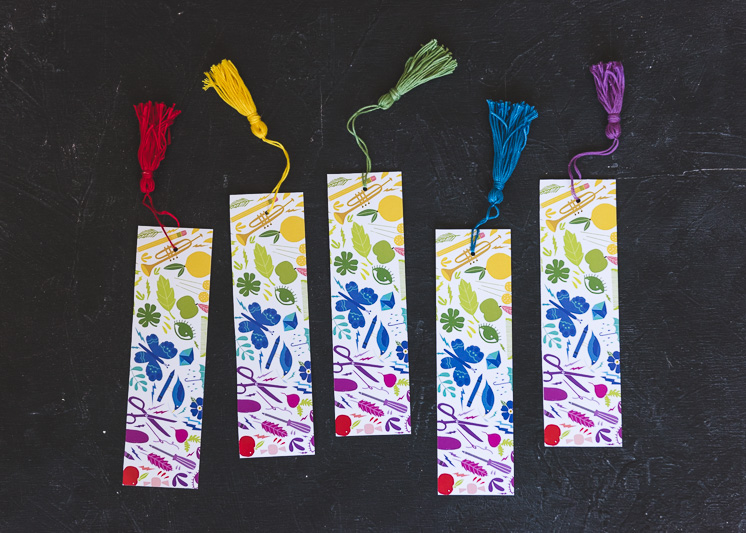 The pink flower wreath was the first project that I started on because it was one that I had a clear vision of from the get-go. I purchased tons of flower and gardening magazines and thrifted books and tore through the pages finding the right flowers to include in the wreath during early November of 2016. Because we had a short deadline to work on all 40 projects, I had a team of interns meticulously cutting out each flower and sorting them by their shade of pink. I then spent my Thanksgiving break placing each individual bloom onto the wreath frame, layering and arranging. Trust me when I say I watched a LOT of Netflix during this period. 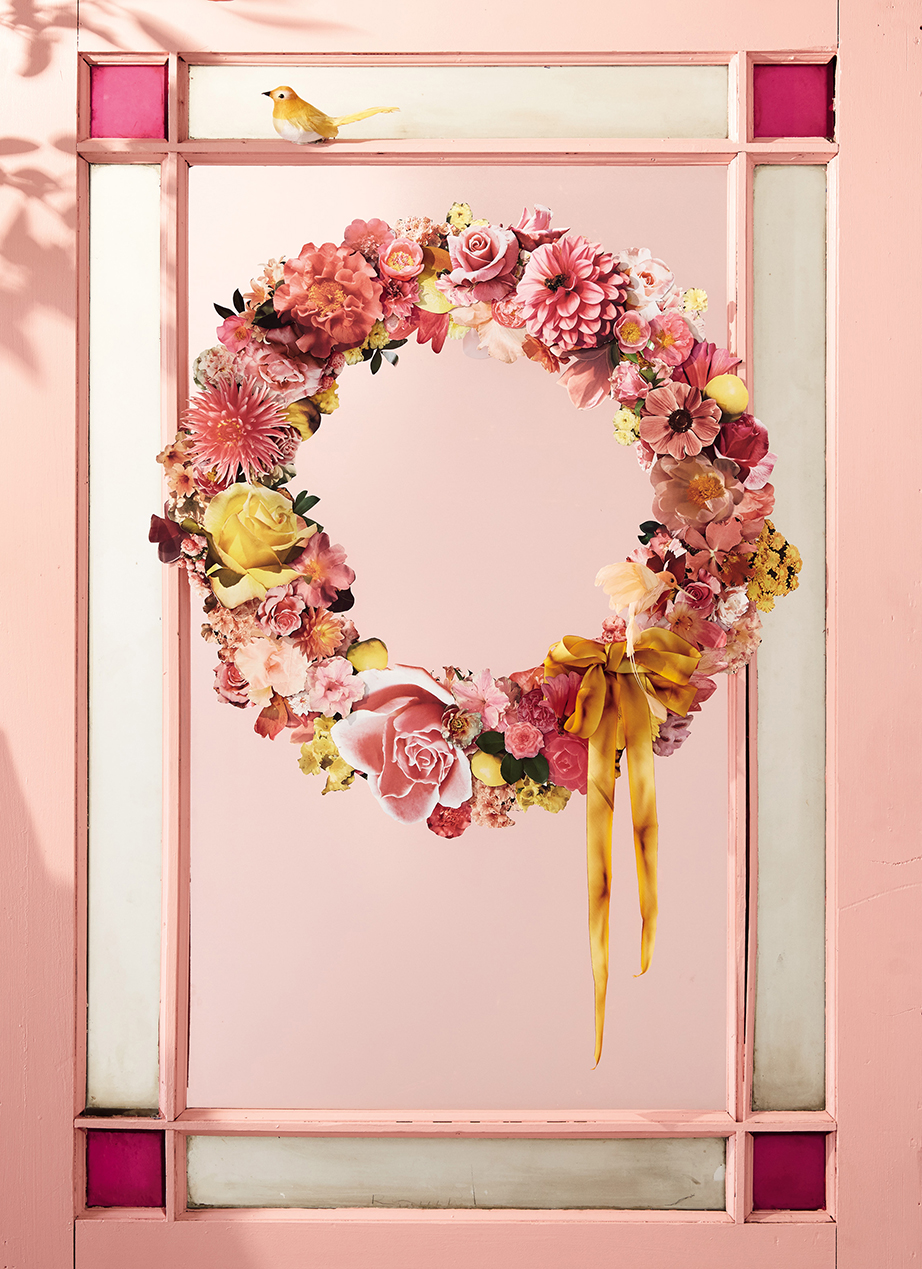 We wanted to find a really special door to style the wreath on so Meta took a look at an antique store up in SLC and found a number of great options. The problem was getting it here and figuring out how to make it work. Mary went up to SLC to pick it up but it didn’t fit in her car so our friend Ally was kind enough to save us in the pinch.

I was inspired when I found this one below out of all the many options, because I was watching The Crown at the time and there was a door JUST LIKE IT! We had to do it! However, the main glass of the door was missing. After working it out with a stained glass artist friend of mine, we decided to not add glass into the door, but use an acrylic piece that would mimic glass and tape it to the back. I originally wanted to add in colorful stained glass to each part of it, but we decided to use these glass vinyl coverings that let light in to create the same effect. 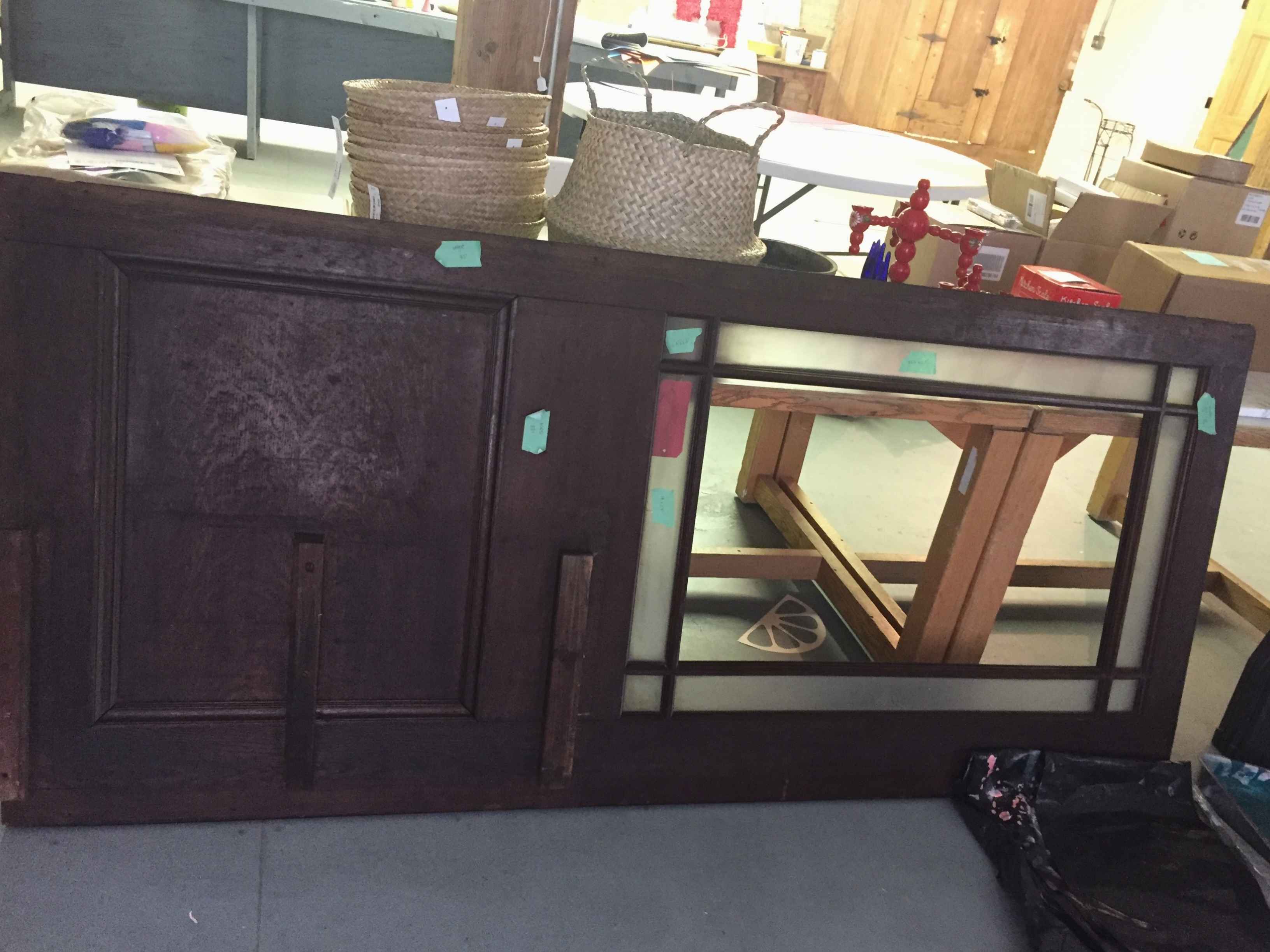 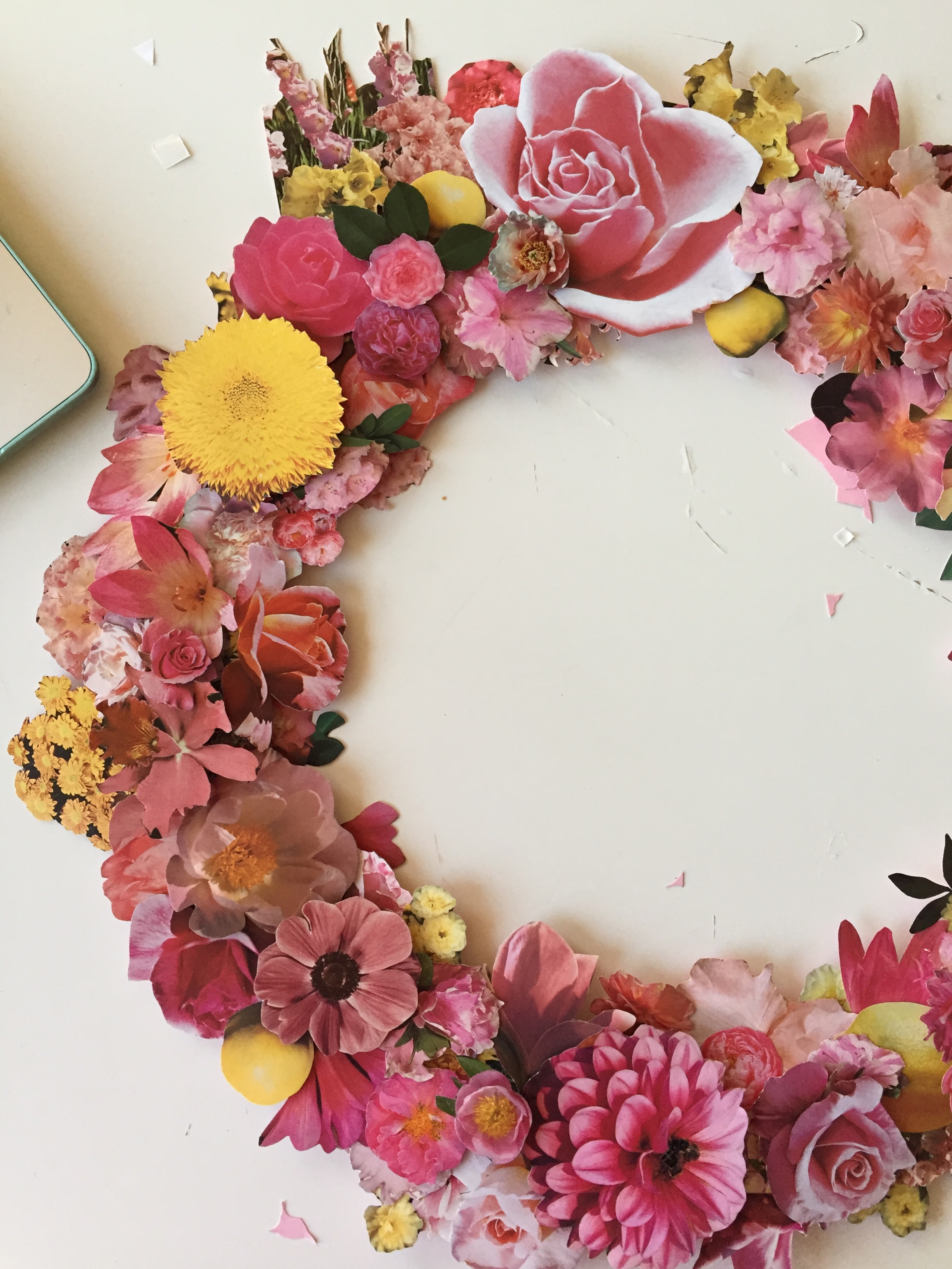 I LOVE how this wreath turned out especially with all the vintage shades of pinks and yellows.

I can’t wait to see how you do yours! What colors will you choose??

If the name of our company doesn’t give it away (Lars), Scandinavian design, culture, and lifestyle is a big part of who we are. We combined two of our favorite things to make this Dala Horse pinata. Dala Horses are small painted wooden horses and an icon of Sweden and it’s such a signature red color that I knew that it had to be in the book. We decided it would make a perfect pinata and a far superior version of the donkey you can buy in the grocery store! 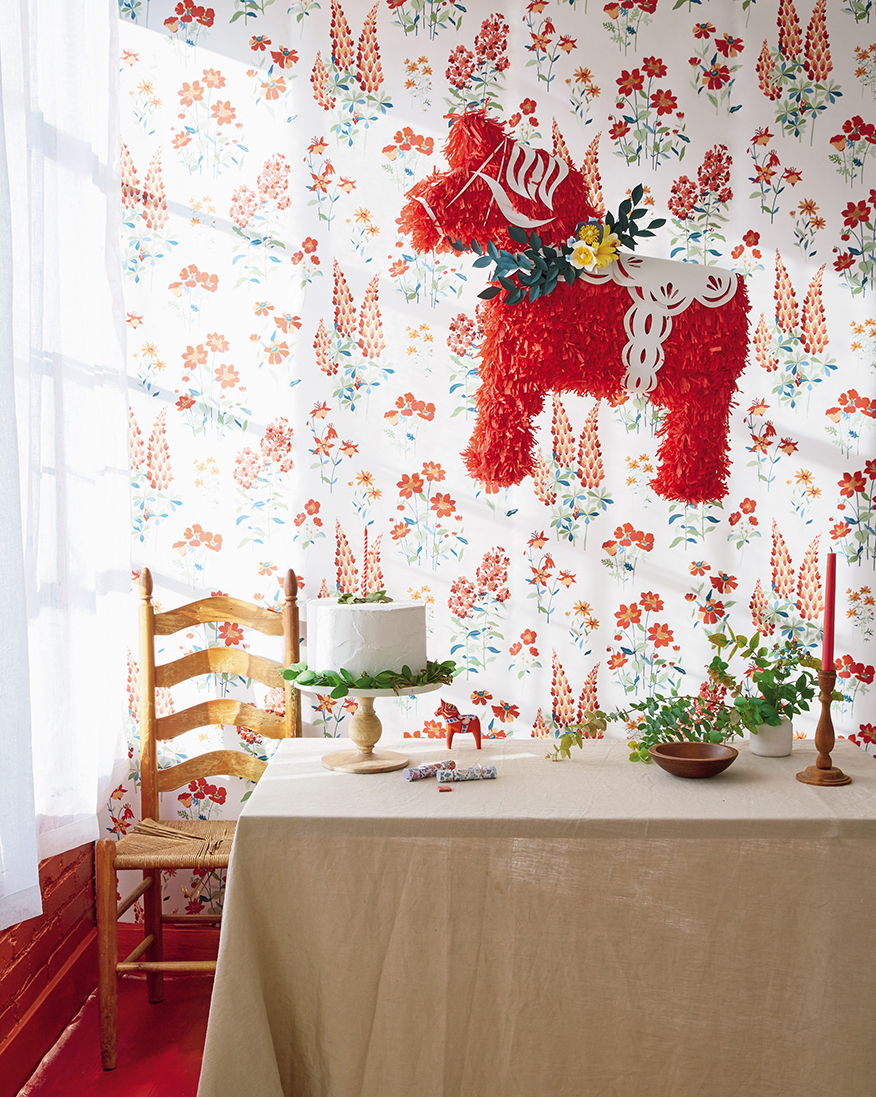 Laura Ashley graciously provided their Fernshaw Cranberry wallpaper for the scene and it set the Swedish meadow vibe we were going for. We taped up the wallpaper using double sided stick tape in our studio, which become a constantly rotating canvas for the entire book shoot. We even had to paint the brick red at the bottom, see above, so that it would blend well with the scene.

We collected a number of aged looking props from my good friend Mary Lee, who helped out tremendously in providing props to us, as well as Meta Coleman. Both are my go tos for good props in Utah, since we don’t have too many shops or rental houses to source from.

As you can see, you can still see the wallpaper lines so that’s one thing that we had to photoshop out. And the night before the shoot we laid everything out when I realized that the horse needed a little something extra to create more interest. So Becca created the leaves and flowers to go around his neck. I think it was just the right detailing! 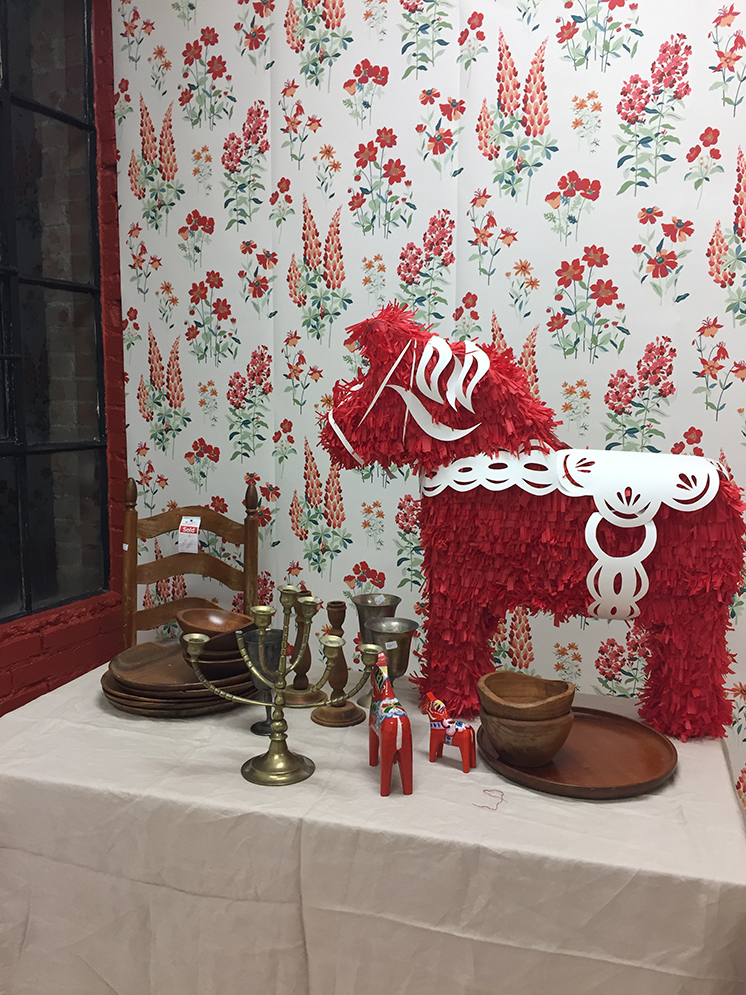 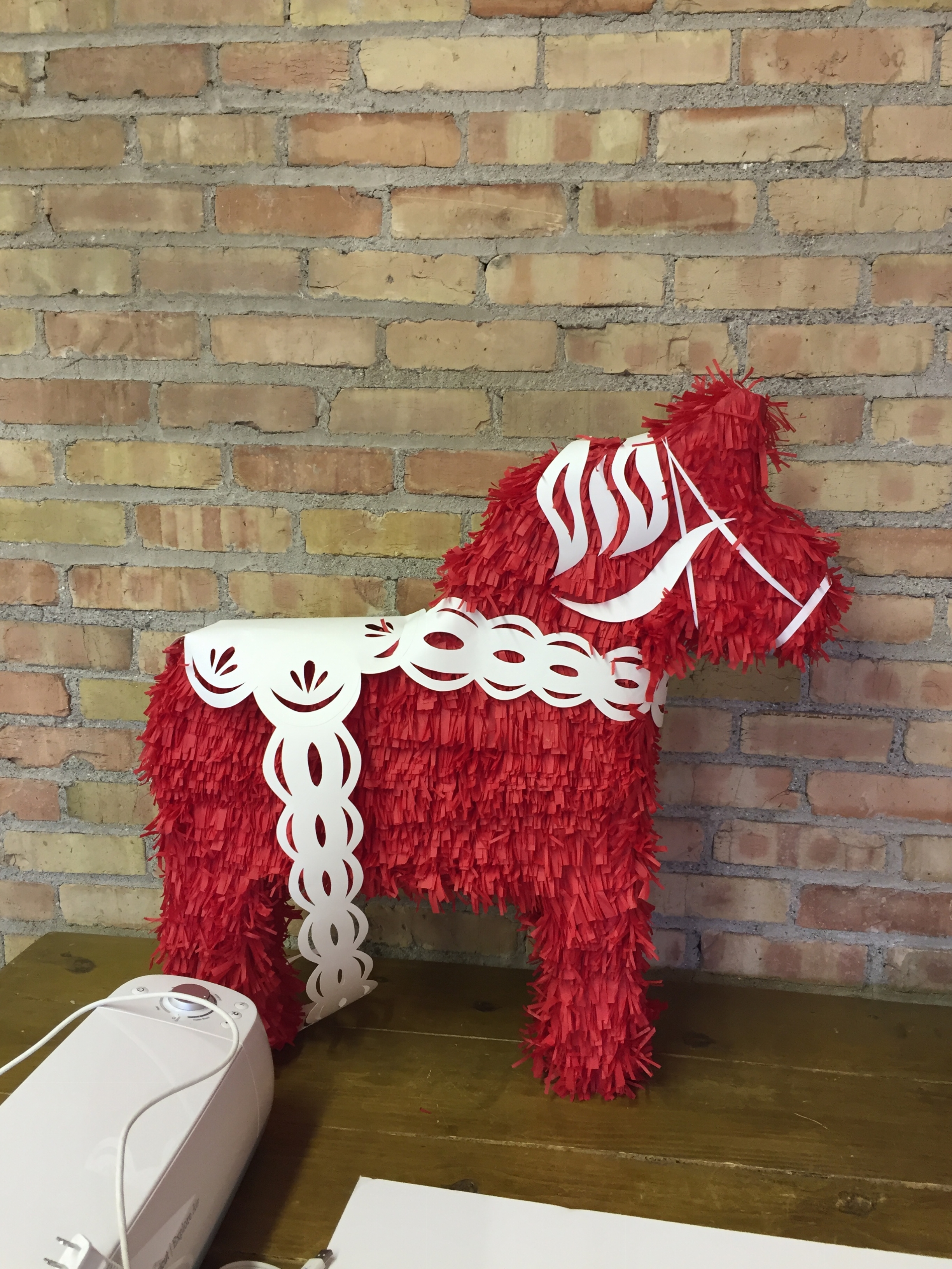 This is literally how we shot it. Ha! This was in our studio so I picked up some curtains on the way to the studio that morning and we taped them to the top of our roller blinds. We used a pole to hang the pinata and someone had to stand VERY STRAIGHT with it so that it wouldn’t twist.

As you can tell, the floor is painted a rainbow checkerboard from the shoot from the day before. It was casting a funny color on the photos so we had to cover with backdrops from other shoots. 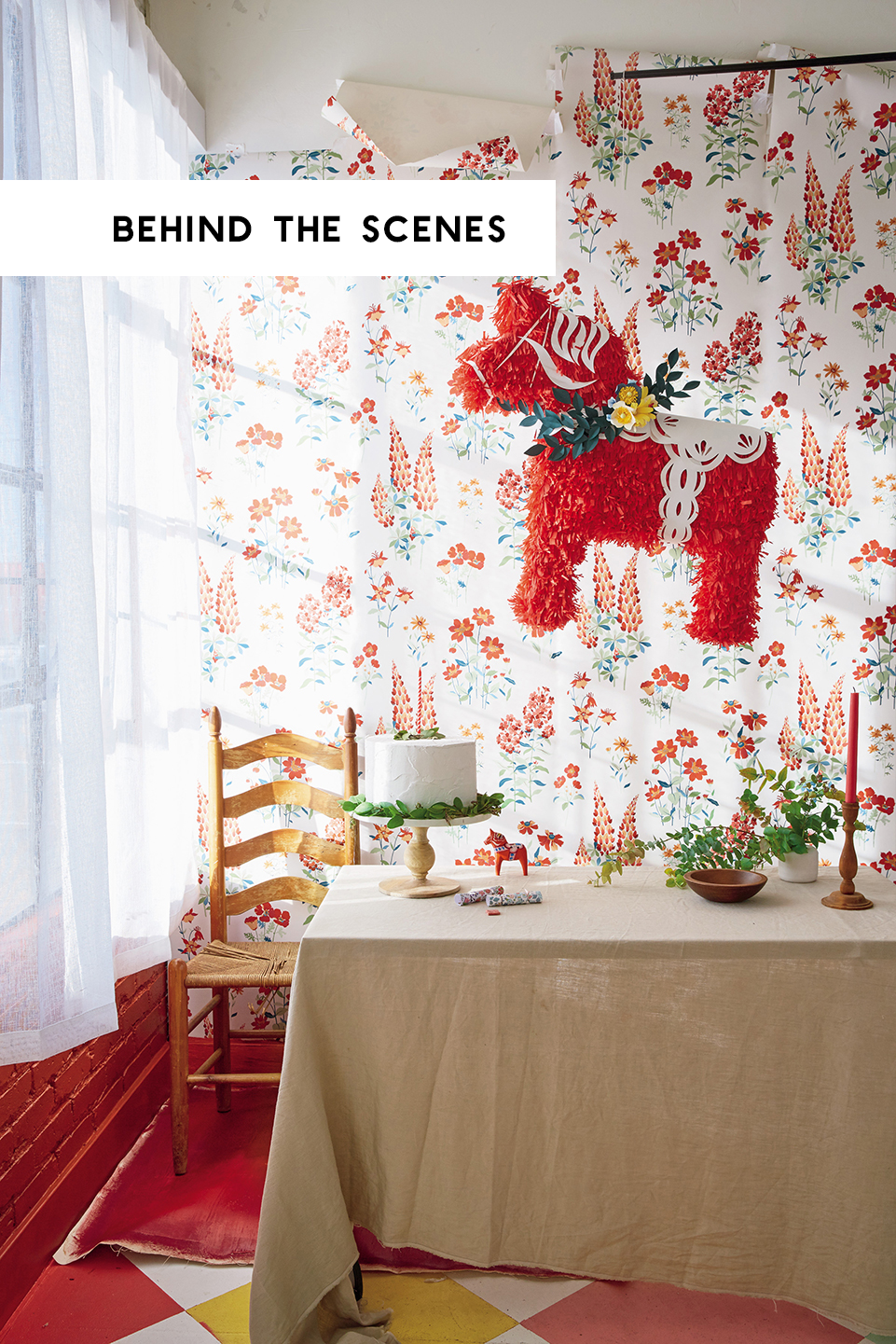 We’ve been doing balloon arches since 2014 and I’d like to say that we ignited the trend! (See our original post here.) I knew I wanted the balloon arch immortalized in balloons but it also had to have a paper element so we added in some paper leaves to fit the bill. But how could we make it different than the original? Enter… 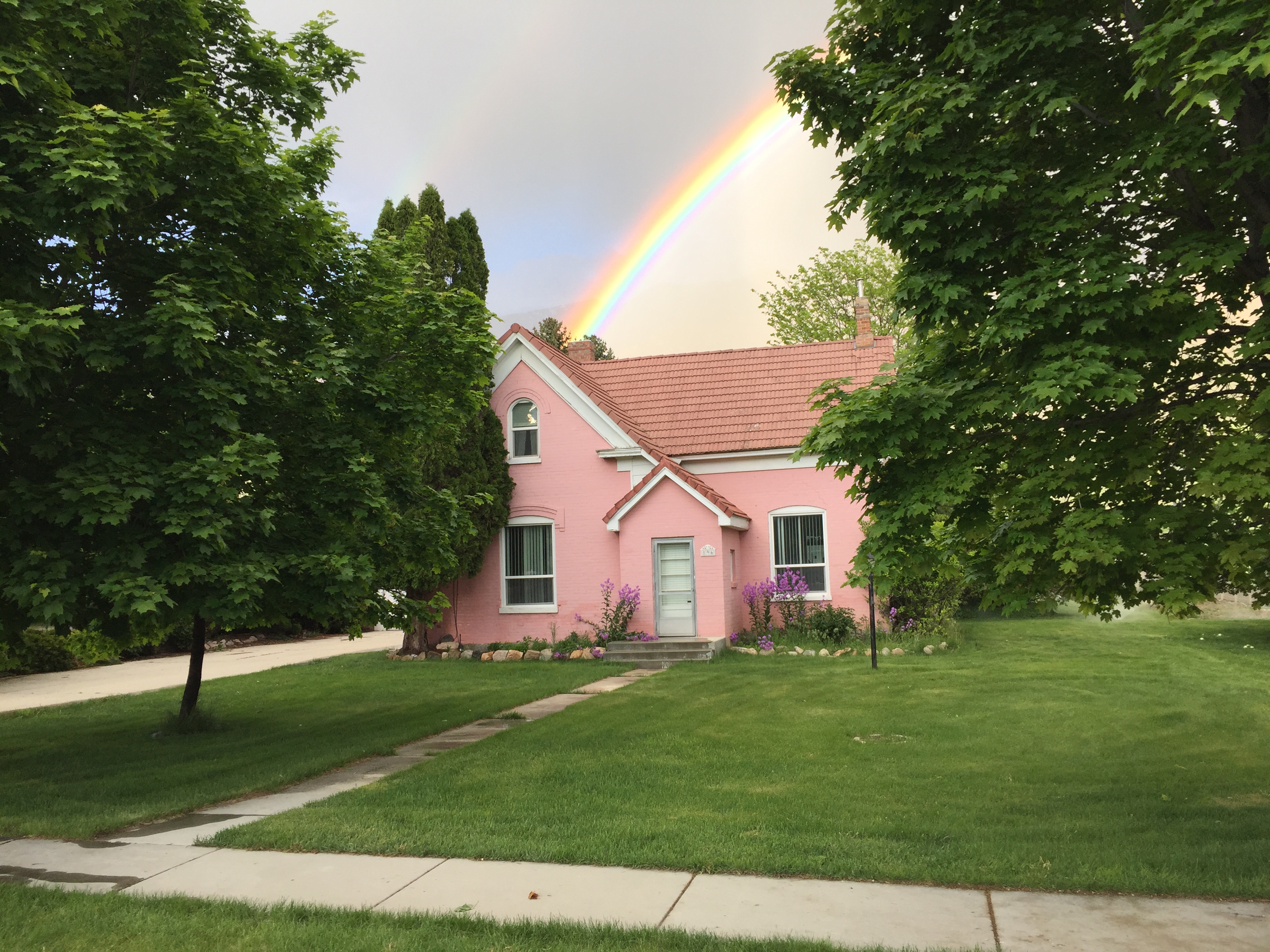 My friend had posted a picture of this pink house below next to the school where her children go and I knew immediately we had to have it as our canvas. So we tracked down the owners and they graciously let us decorate their facade, though I’m pretty sure they didn’t know what they were committing to. And to be fair, we didn’t know either, but it just so happened to be a freezing cold day in January and working outside for a few hours was not my idea of a cozy moment. The owners let us camp inside for a bit while they were both at work. We changed out the curtains and tacked on balloons to the entire facade. We even scraped off the snow and remains from fall.

But the best moment by far was when I got the idea that we needed to have balloons coming out of the chimney. Ideally we would have had the same amount of balloons as the Up but we only had these left so…we made do. Paul was up to the challenge of attaching said balloons (I think he was secretly stoked) but I must say that it was really painful to watch. 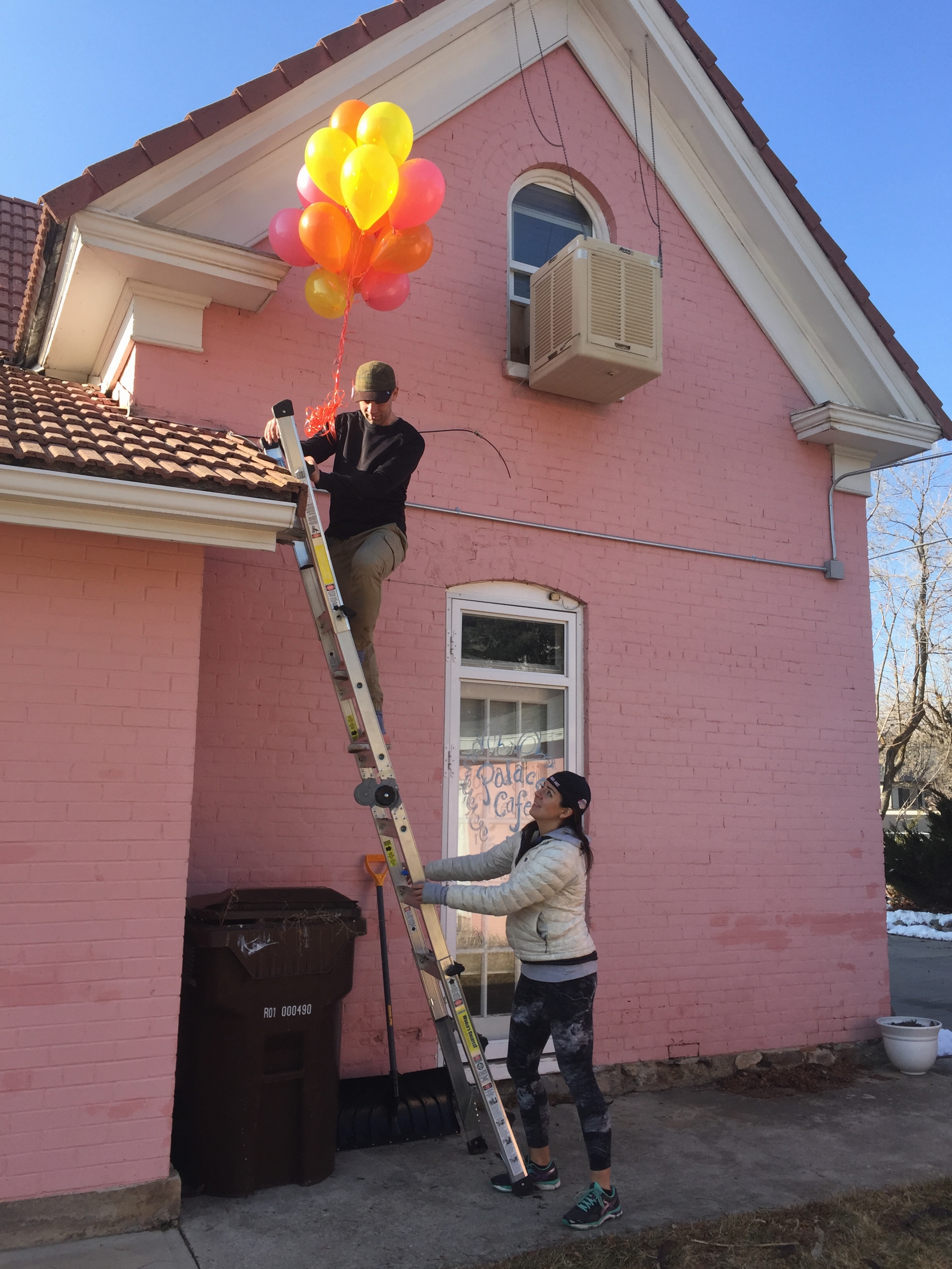 And because it would have been a bit too challenging to have him come down for the shot and back again, he stayed up there for the final shot and Chaunte shopped him out. I can’t look at this picture and not see Paul in the final shot. 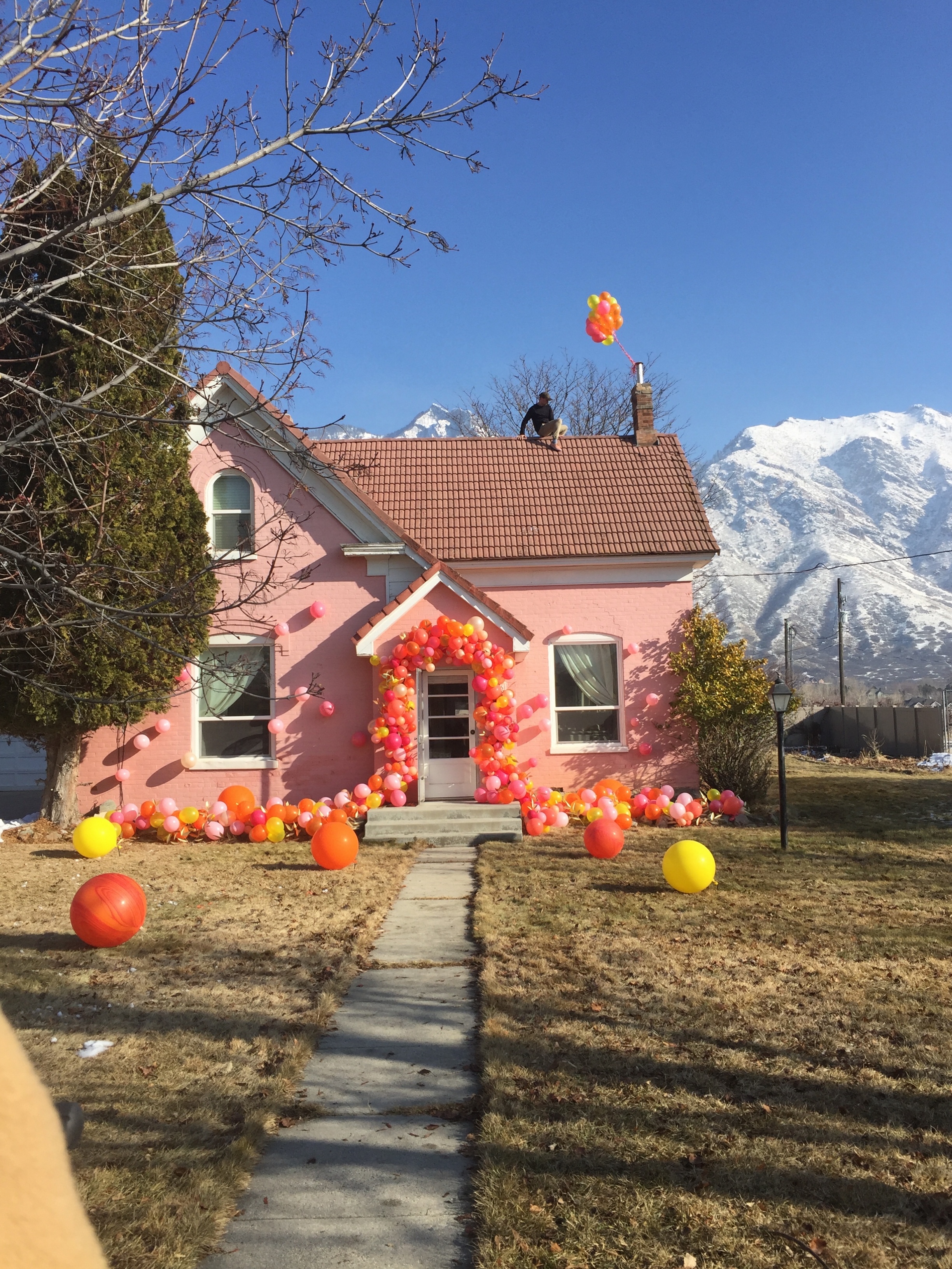 Balloons cast a pretty light in the sun. 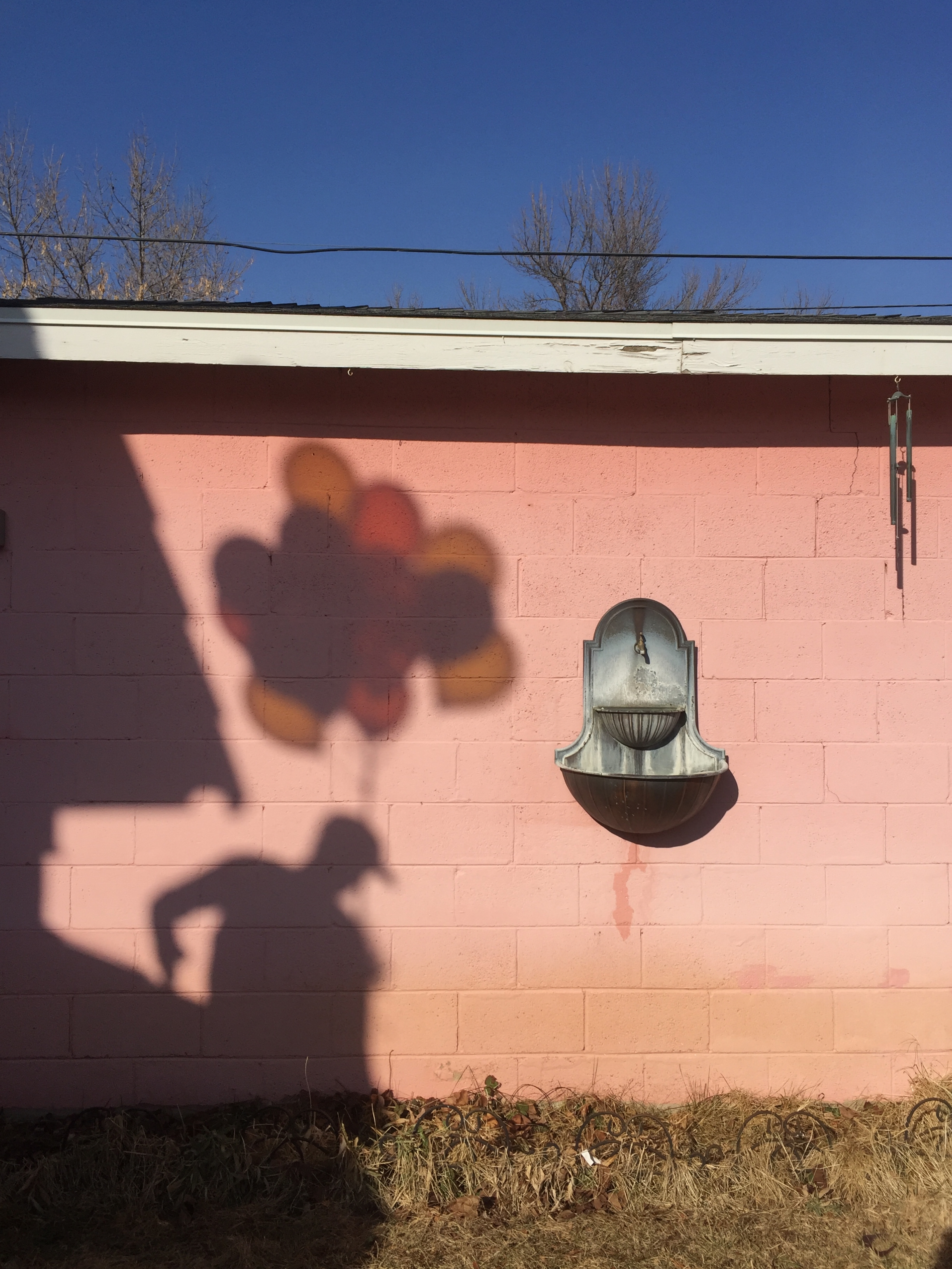 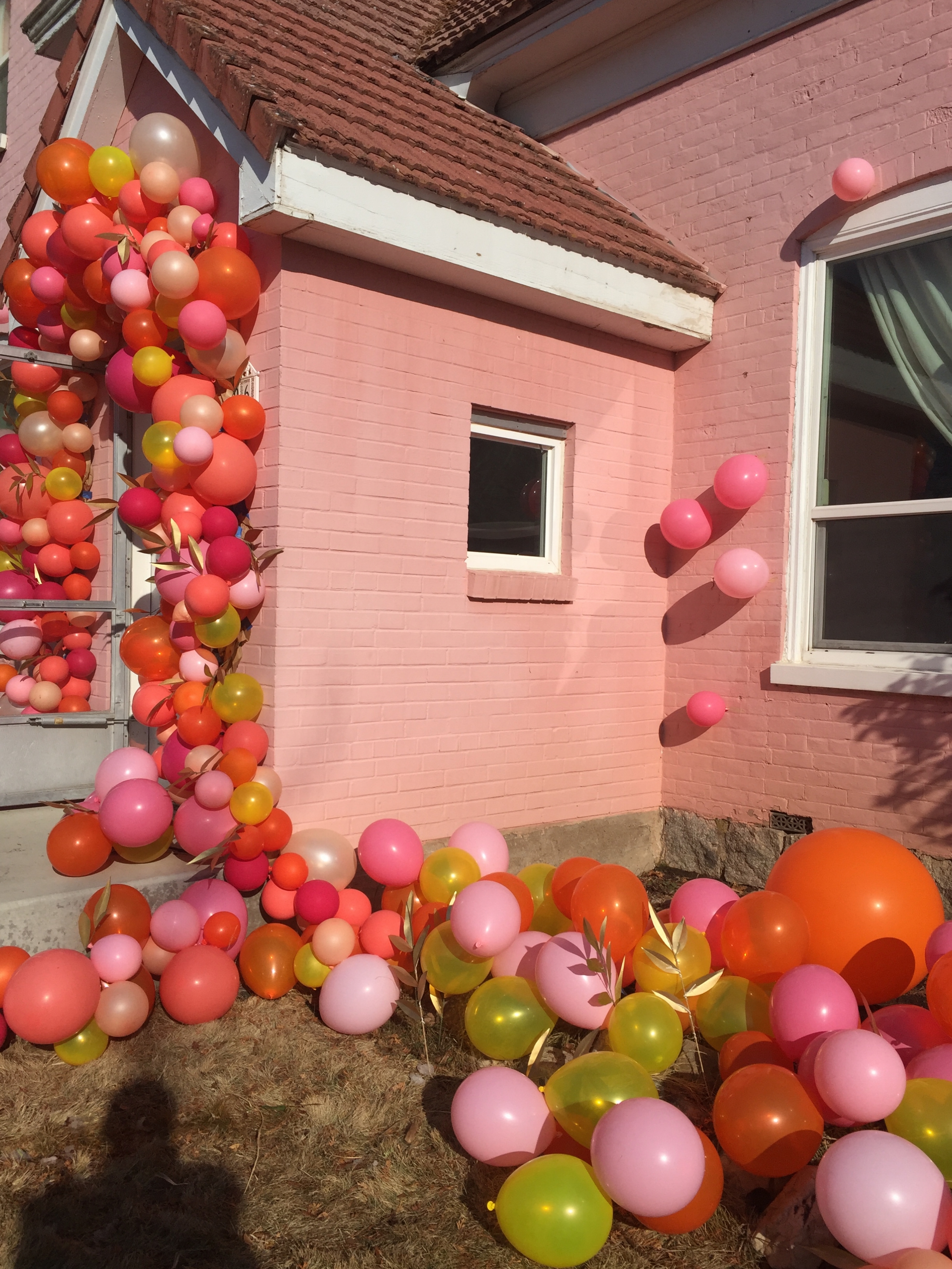 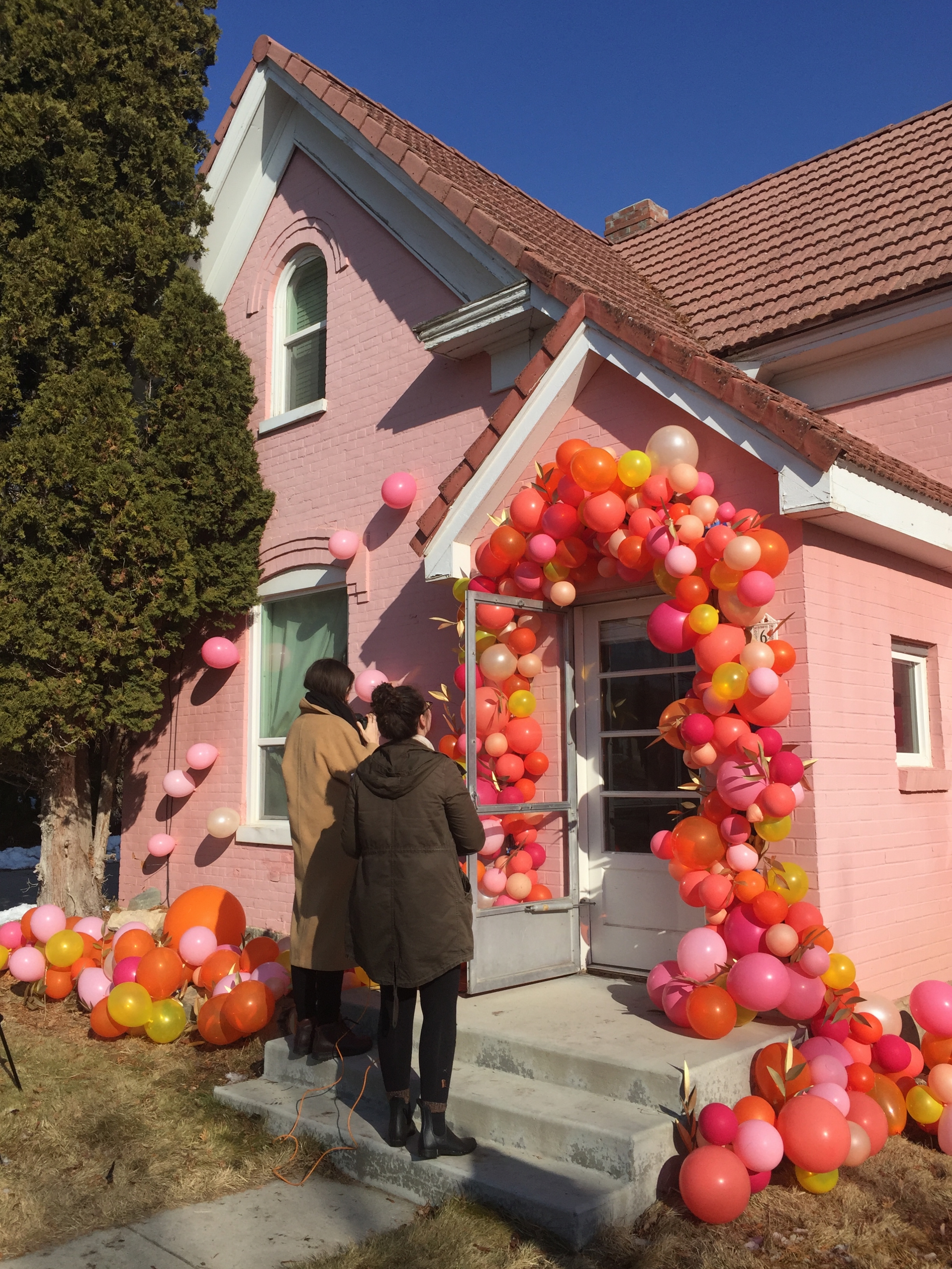 This Rainbow tissue paper rug literally took a VILLAGE. I suppose I might have underestimated the amount of time this Morrocan rug would take to make out of tissue paper. People were literally gluing on tissue paper squares on the car ride over to the site we were photographing it at. It was down to the wire people! I highly recommend enlisting some friends to aid you on this project. A good Netflix series doesn’t hurt either! 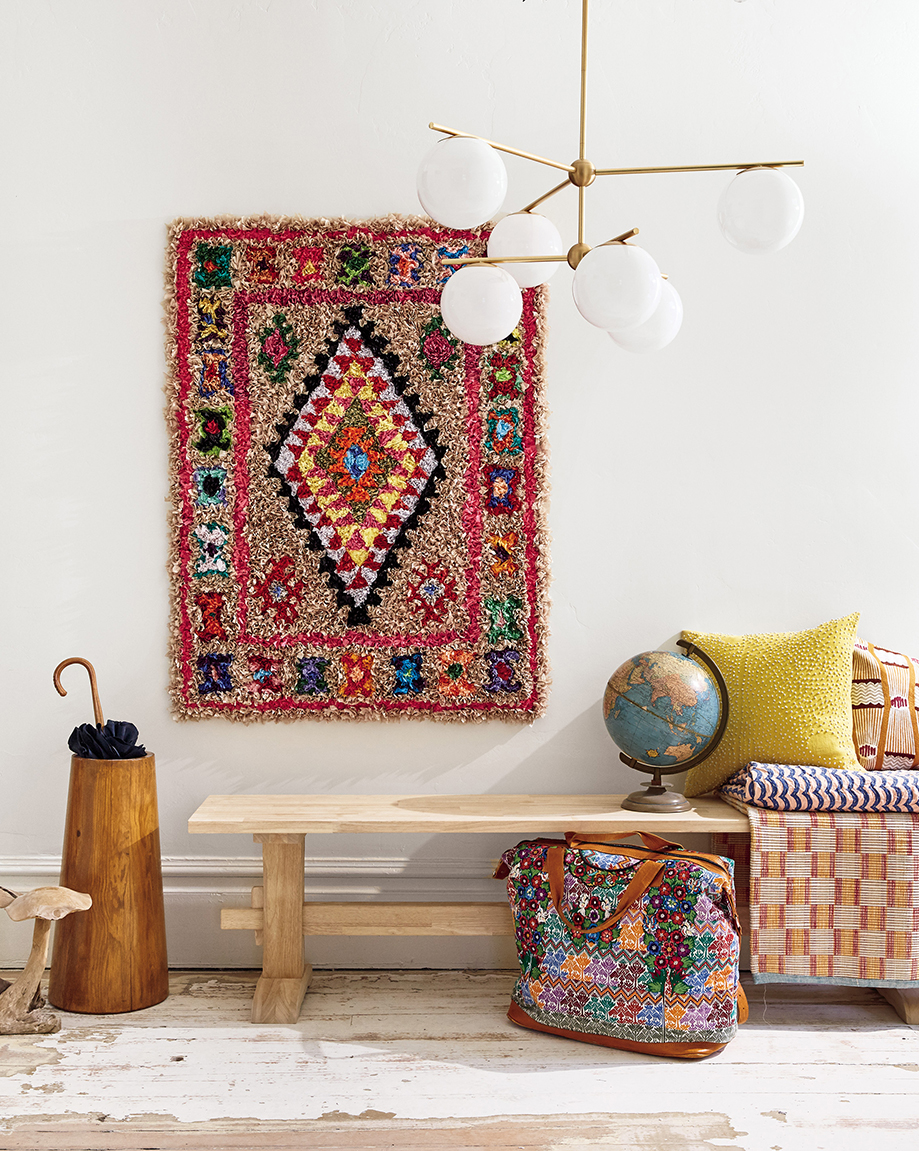 This was the start. 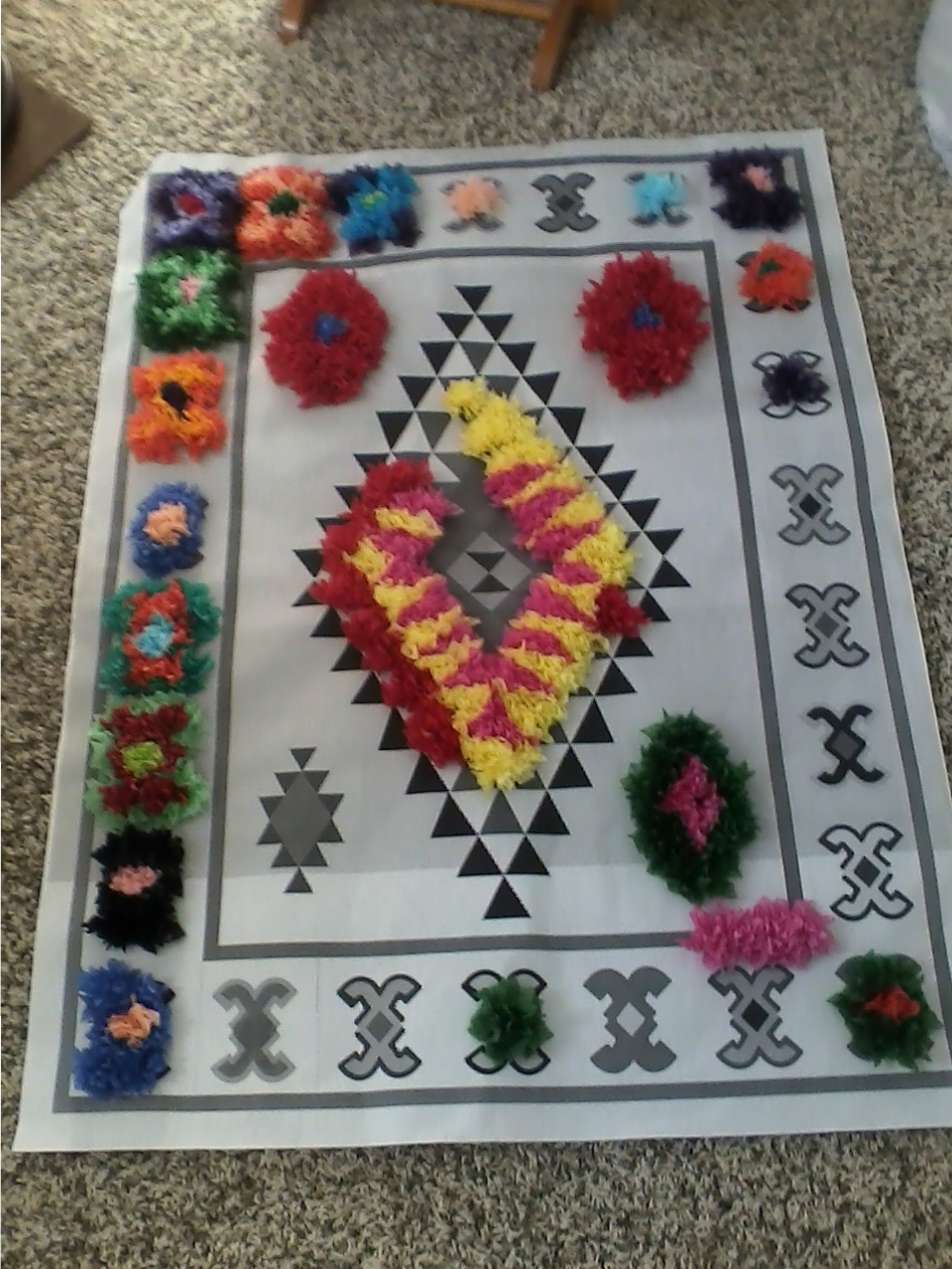 Wendy at Chrysalis Preschool let us use her school before they finished painting the place and we loved the rustic character of the flooring. I love this full shot because it shows what we had to cut out. Ha! Two opposing chandeliers! 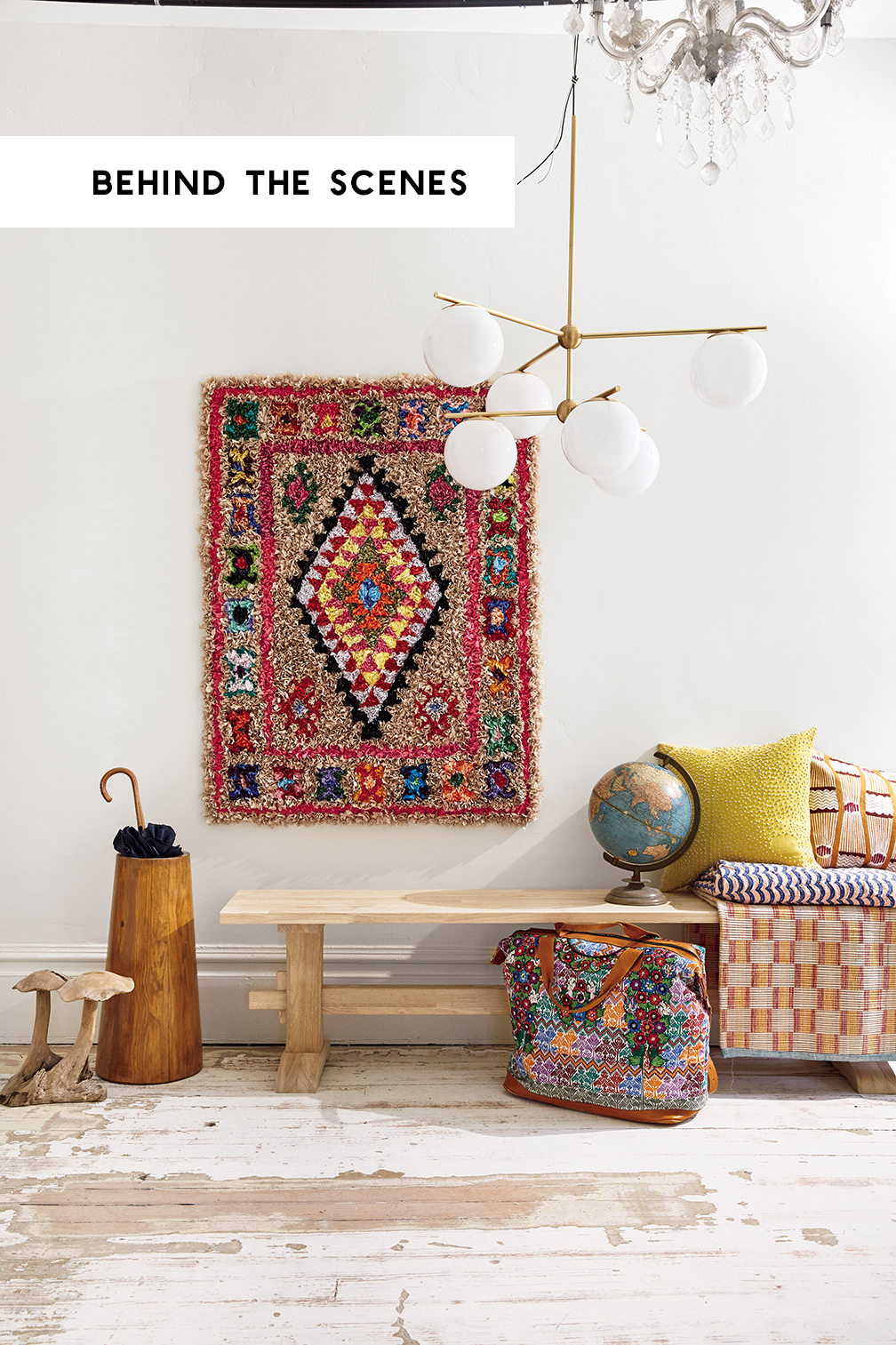 In order to shoot the rainbow honeycomb, we purchased a special doorknob to style it with. However, the door we used did not fit this specific knob, so we had to have one of our team members, Anna, hold the knob in place from the other side of the door. We got the shots we needed and wrapped the shoot. Unbeknownst to me, Anna didn’t know we had finished the shoot and remained behind the door, holding the knob, for an additional half hour! It wasn’t until a few days ago that she revealed this to me! 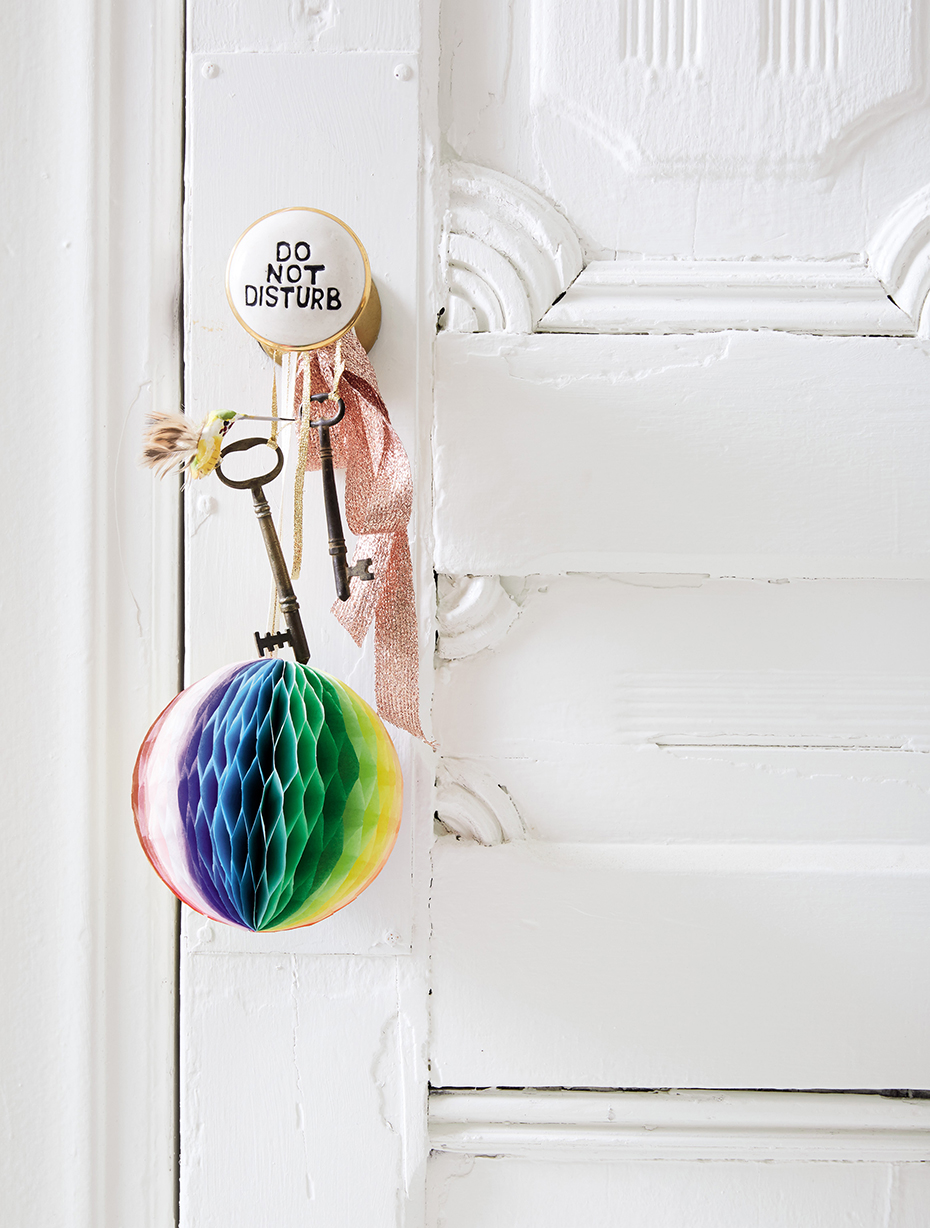 Oh, we have stories for days and now I’m on a roll. We just may have to share them all! But if you’d like something to immortalize the book even more, here’s the beautiful poster made by the one and only Lisa Congdon. 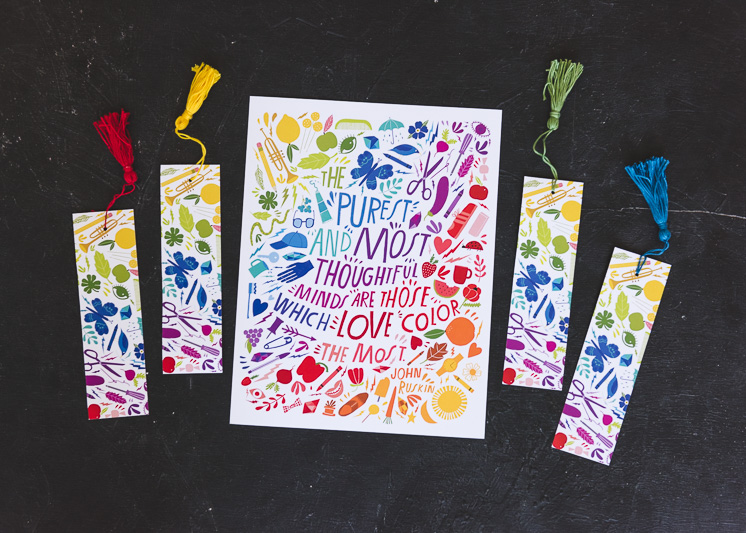 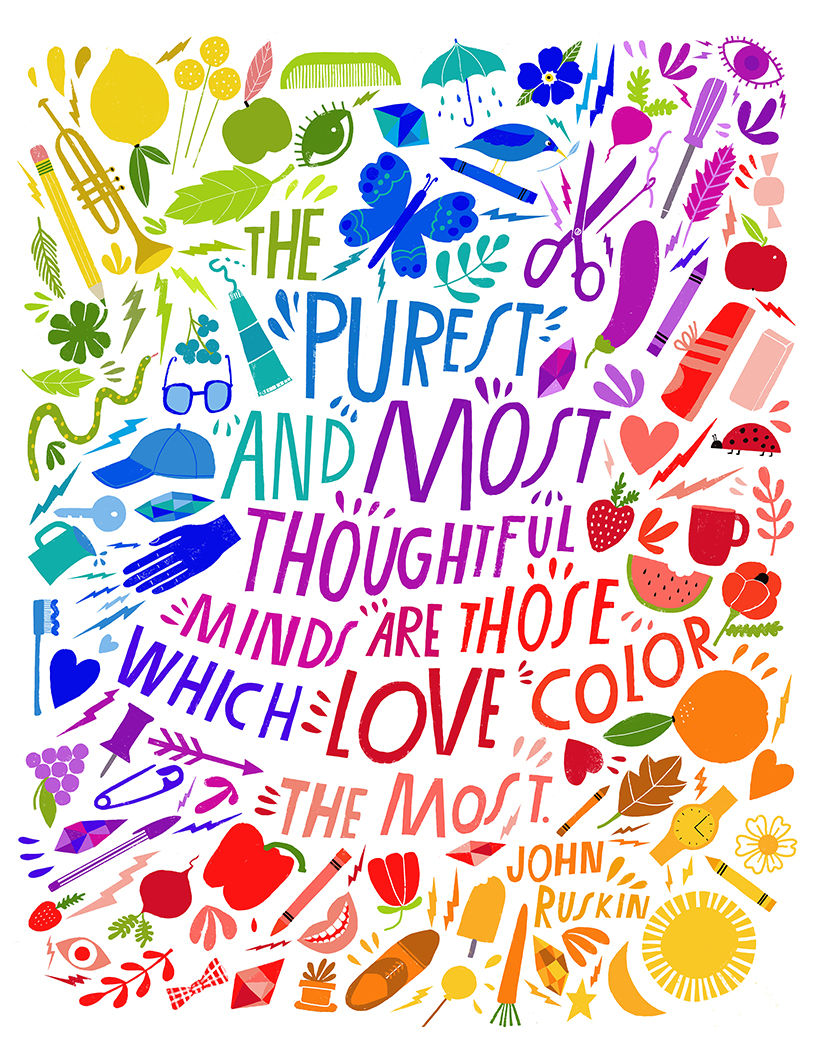 To purchase this print check out our Print Shop

Eight Crafts to do with Leftover Cardboard

What is a Cyanotype? Ever seen those iconic blue and white photographs and wondered how they were made? If cyanotypes are new to you, here's...
Read more
advice

Female Author Booklist We're excited to share this female author booklist with you! There are some amazing classics in here. While I haven't read all...
Read more
Architecture

DIY Paper Heart Wreath To me, Valentine's Day demands decorations that are beautiful and easy to make at the same time. We're all back from...
Read more