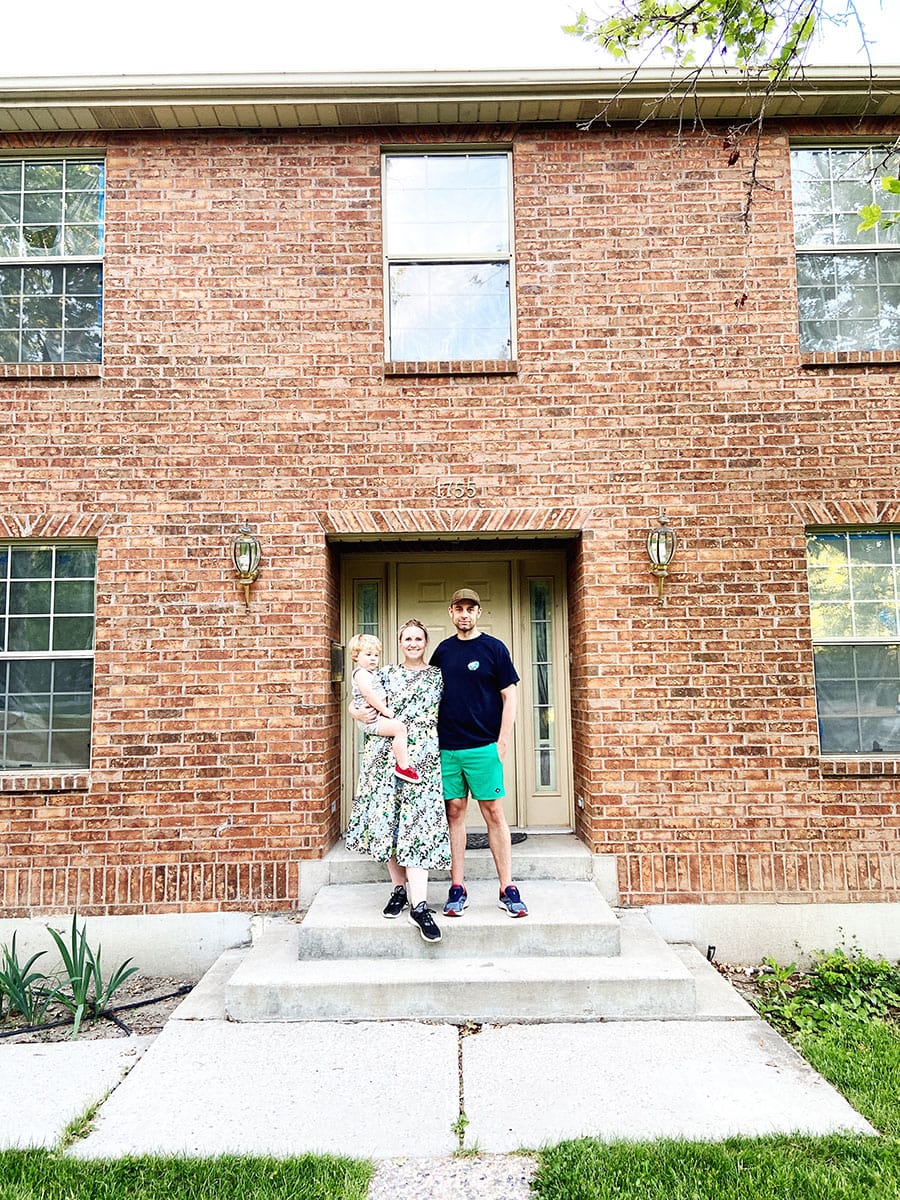 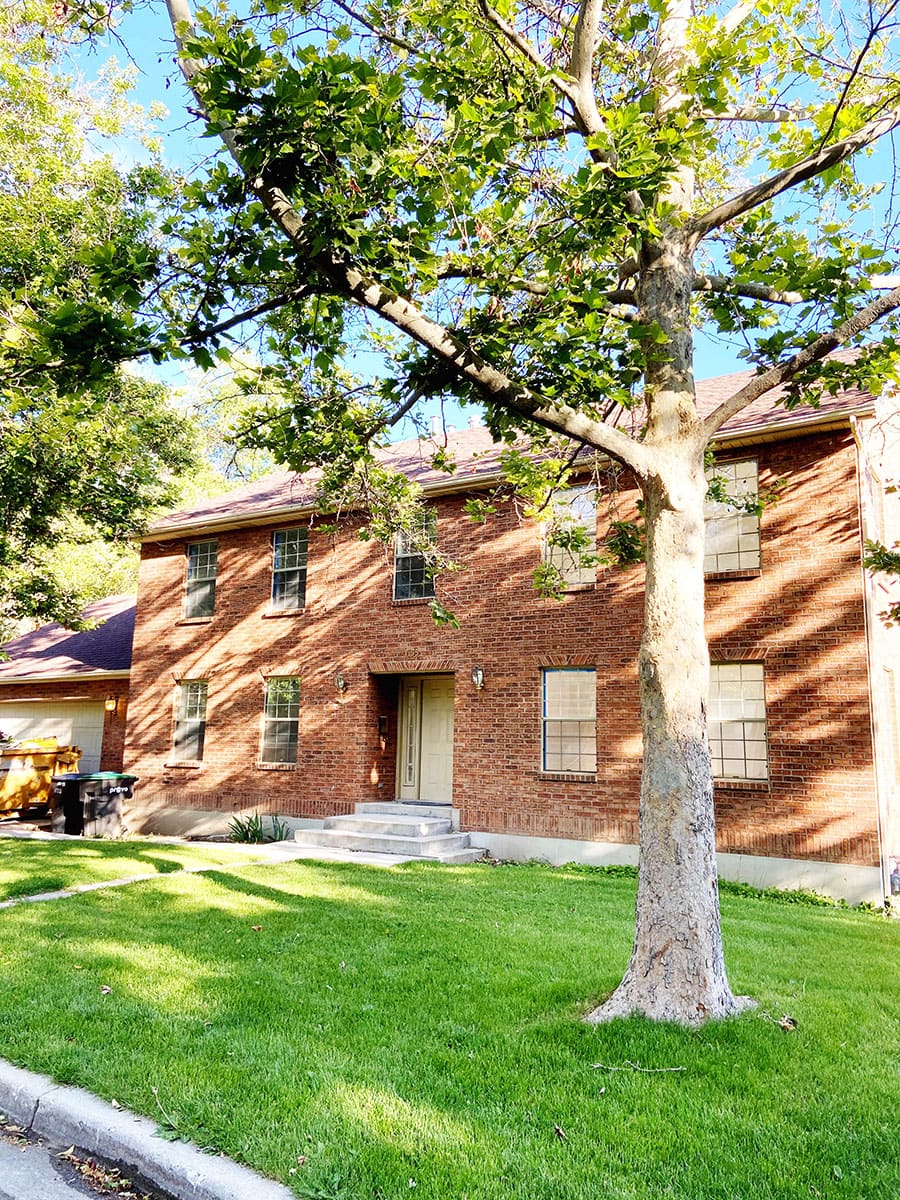 The House That Lars BOUGHT!

It’s been a long time in coming…but yes, Lars bought a house. Guess we should change our name now?

We’ve lived in Provo, Utah since moving here 7 years ago from Copenhagen, Denmark, where my husband is from. First we came for Paul’s school, then once he was done in 2016 we technically could have moved anywhere…but where??? Lars at that point was in a studio space and we had a few employees so it would have been tricky. We knew we didn’t want to move to California where I’m from so we just didn’t budge! We brainstormed where we could go and then…fours years later…we have a kid and then Paul recently got a job here in Provo a few months ago, yada yada yada. It was that last final straw where we realized, “ahhh, we’re here I guess!” Nothing like decisions being made for you.

So, here we are! I’ll admit that I go back and forth about wanting to be somewhere else all the time, but ultimately, we’ve developed a really wonderful friend group and community that would make it extremely hard to leave.

We had also been waiting for the housing market to crash. Utah County has been going up and up and up…and keeps on going up! We finally realized this may be our new reality so we might as well start looking. And then once we decided to look there was no going back.

We bought a house!

We were right in the middle of shut down and working from home and GOING CRAZY when we decided to look! Our small apartment was/is bursting at the seams and rather than make space we decided we just needed to explore all our options. It was the only natural thing to do 😉 The unfortunate thing is that we LOVE renting. Ha! We’ve had landlords who have become family and it’s honestly pretty sad to move.

Some friends of ours were also looking and they found an awesome house at an awesome price and that gave us some hope. So we put it out into the Instagram universe…and the universe delivered! A reader pointed us to a house that had gone on the market that day and it was cute and adorable and at good price IN OUR NEIGHBORHOOD. We RACED that day to get pre-qualified and our realtor for that house, Aaron Oldham, was so kind to make it happen. Well, sadly, we couldn’t compete with a cash offer. That happened a couple more times.

We did a ton of digging around and found out that there were/are going to be a ton of houses going on the market in our neighborhood in the next few months and immediately we thought of our dream home. Maybe that one would be one of them?

Yup! It was! We had been walking by this house for years and commenting on how we’d love it one day. It’s on a cute, quaint street that’s hidden and so quiet. I also knew that it was being renovated (I’m super snoopy ;). One day I mustered up the courage to knock on the door and find out what was going on. There was a worker who was doing the window mouldings who let me walk through the house. And then the realtor, who was also in charge of the renovations, came in and said that the owner would sell it to us AS IS.

Because of the state of the house, it’s treated differently by loan officers so it took us a little while to figure out how to make it happen. With some creative problem solving and miracles, it happened! We closed last week.

And now, the circus begins! We have to QUICKLY put in flooring, bathrooms, kitchen and some other things to move in ASAP and then we will take our time after that.

Ready for a tour?

Here’s a view of the kitchen. Phase 1 of the renovation consists of finding used kitchen cabinets (already found on Facebook Marketplace!) and put them in. We’re not necessarily going for beauty in this first phase.

As you can see, there’s absolutely nothing. However, we do have a fridge and range in the garage waiting to be put in so we have something at least. 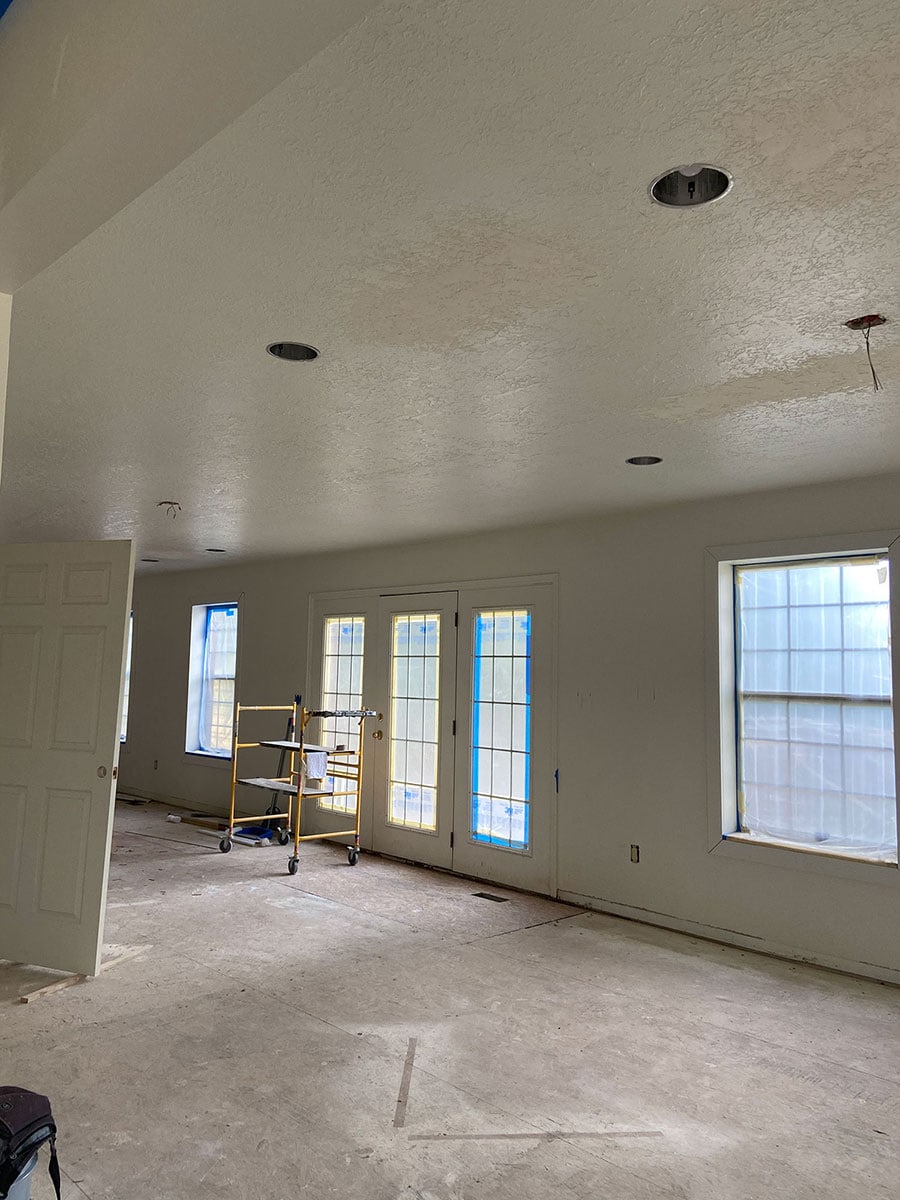 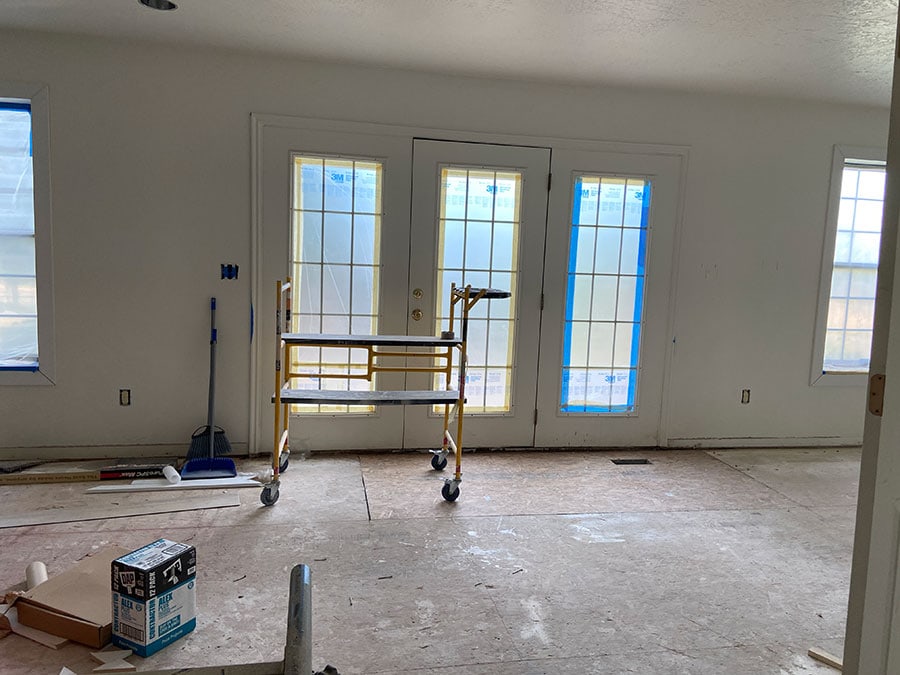 This is the other side of the doors from the family room. That entry leads you into the living room. 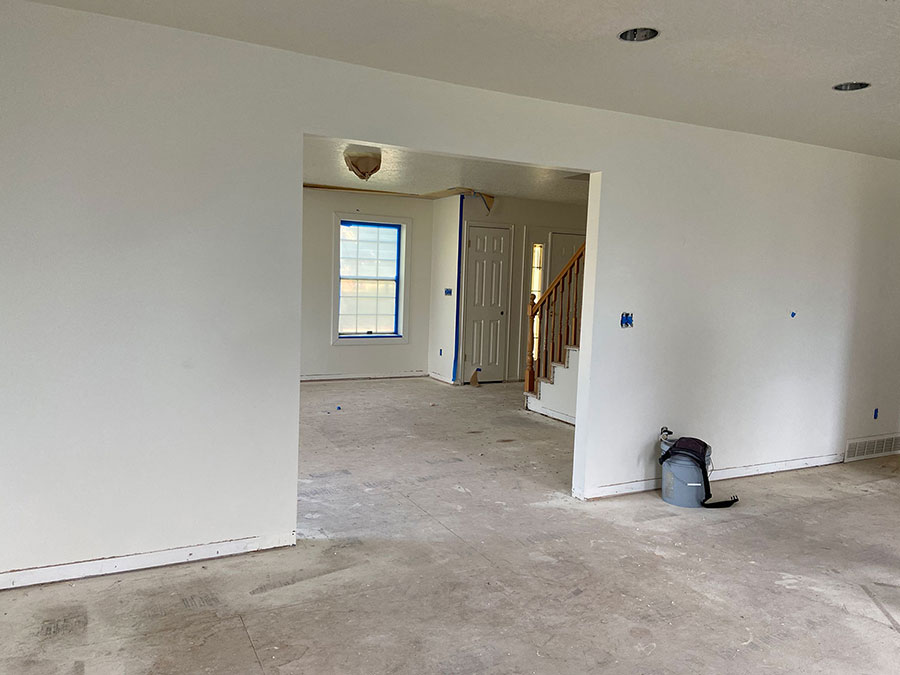 And here you can see the staircase up to the third floor. There are 3 levels, the bottom level being a finished basement. In my dreams, and this was part of our original search, we were looking for something where we could put Lars in the basement. And I’m pretty sure it’s a go! Just gotta figure out some stuff there. 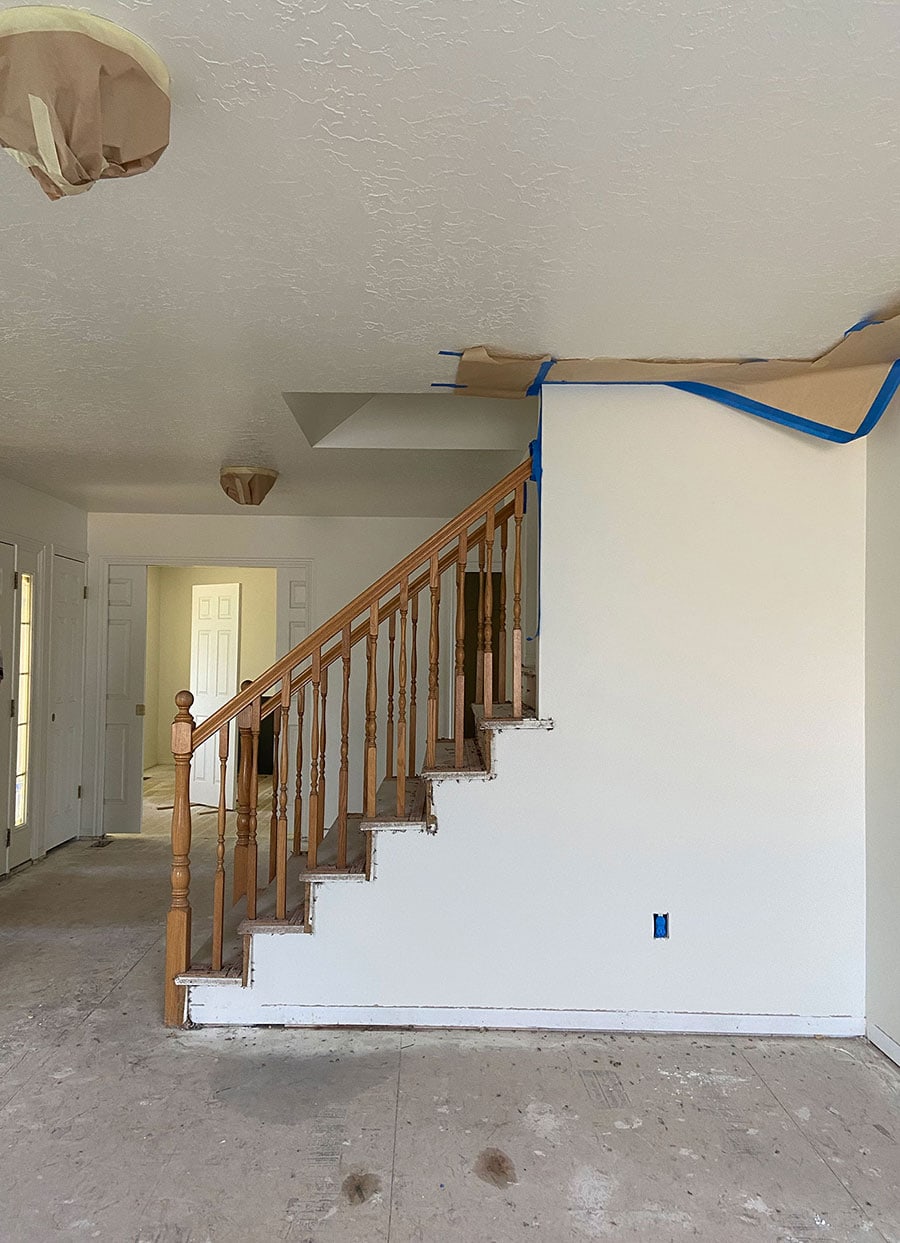 Ok, the basement. I’m not going to show you every room because they all pretty much look the same. You can see it’s the basement because of the concrete. There are three bedrooms down there along with a living space and two bathrooms. 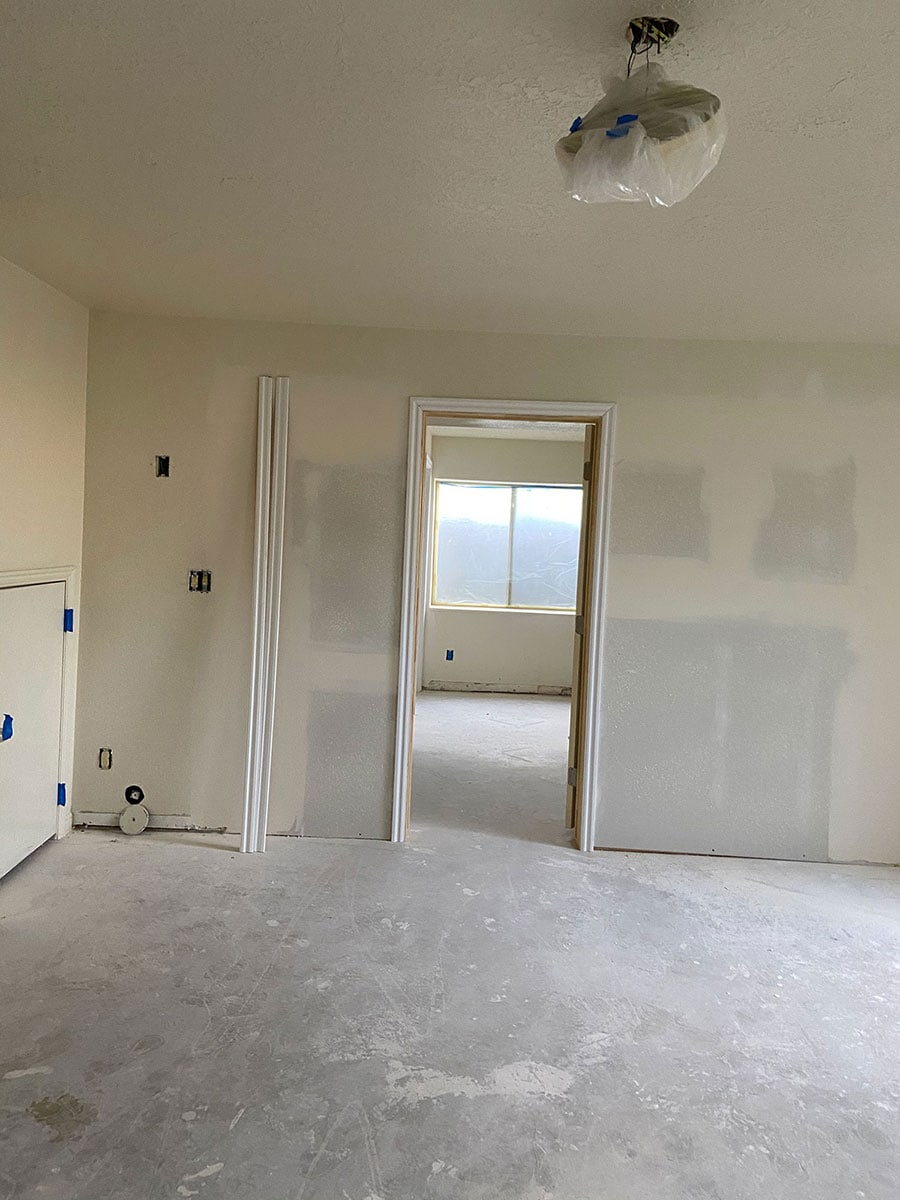 And this section is for the kitchen. 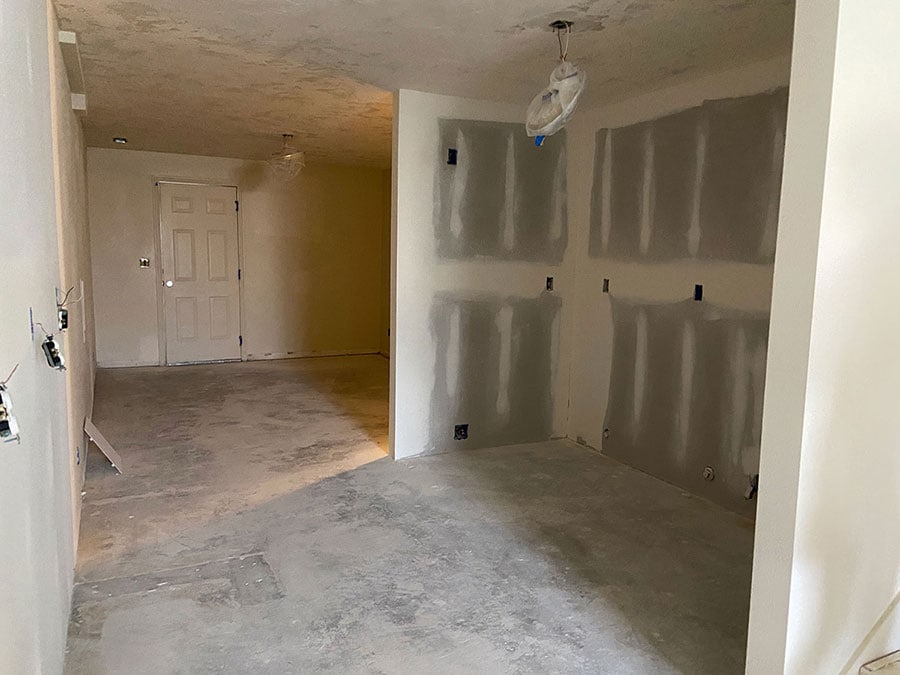 I WISH the bathrooms still looked like this, however, during the week that we were trying to figure out funding, the owners proceeded with the renovations and removed all the bathrooms completely, so in the mean time, we have to put something quick and cheap in. I’m open to your suggestions!

I’m not going to show you all the bathrooms because you will seriously not know the difference between them. They’re very much all in the same state right now! 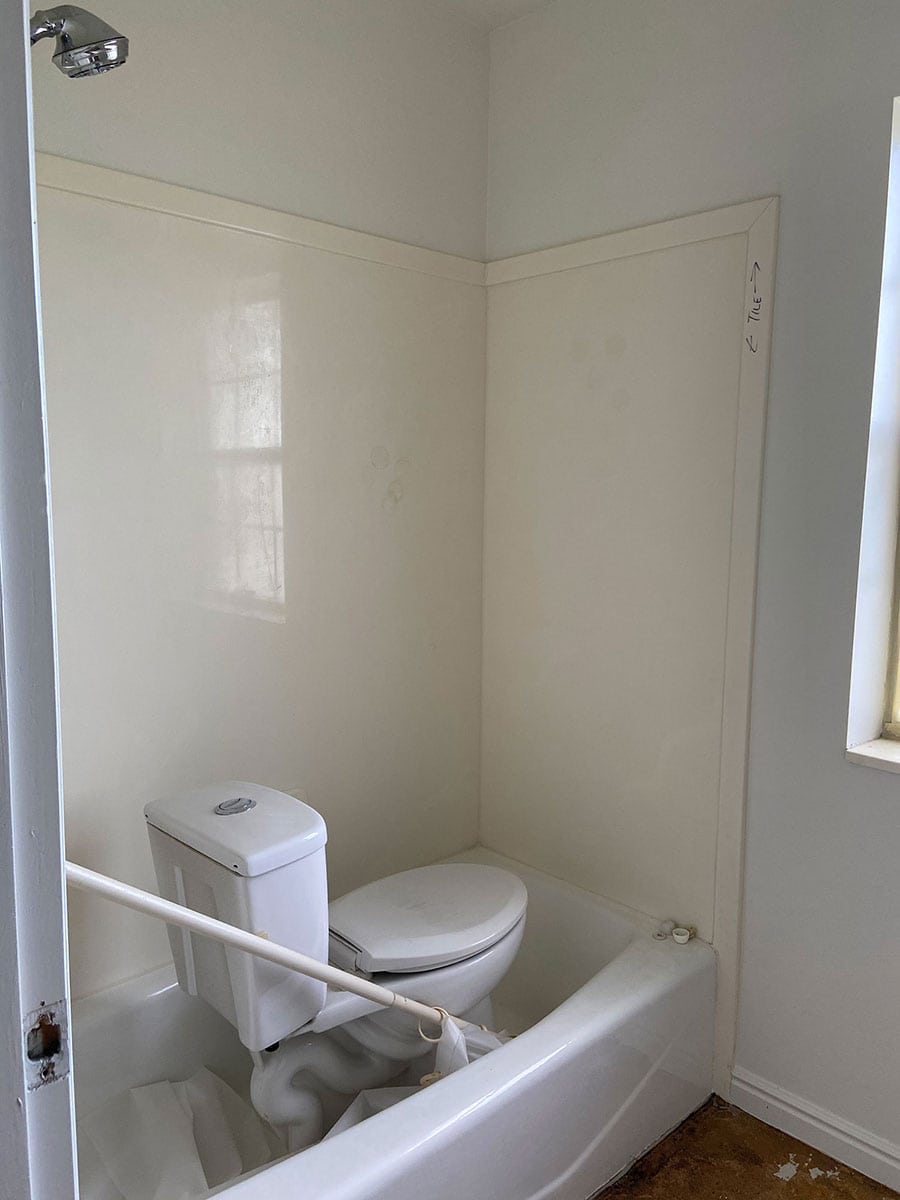 This is the one room in the house with flooring, but it will need to come out once we figure out what we’re going to put in there. It’s the laundry room slash pantry. 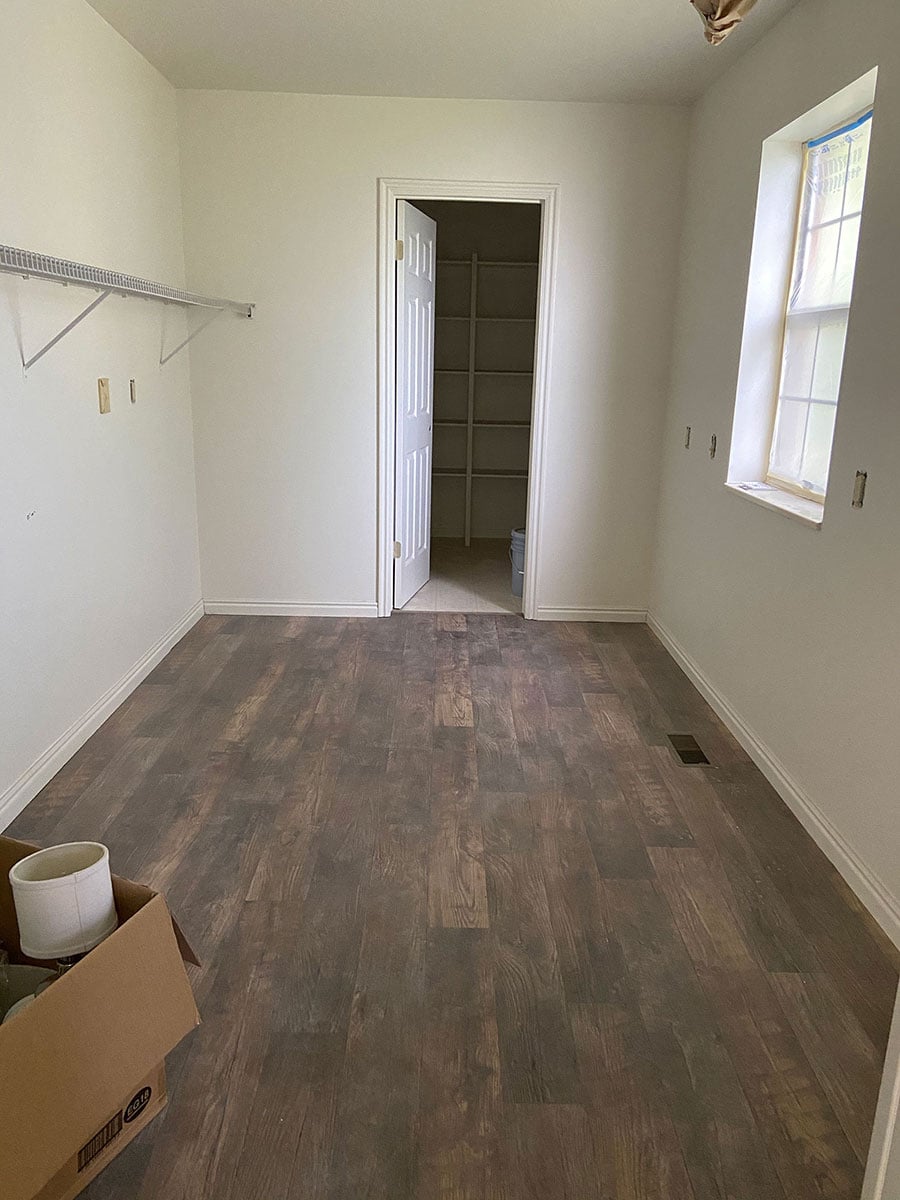 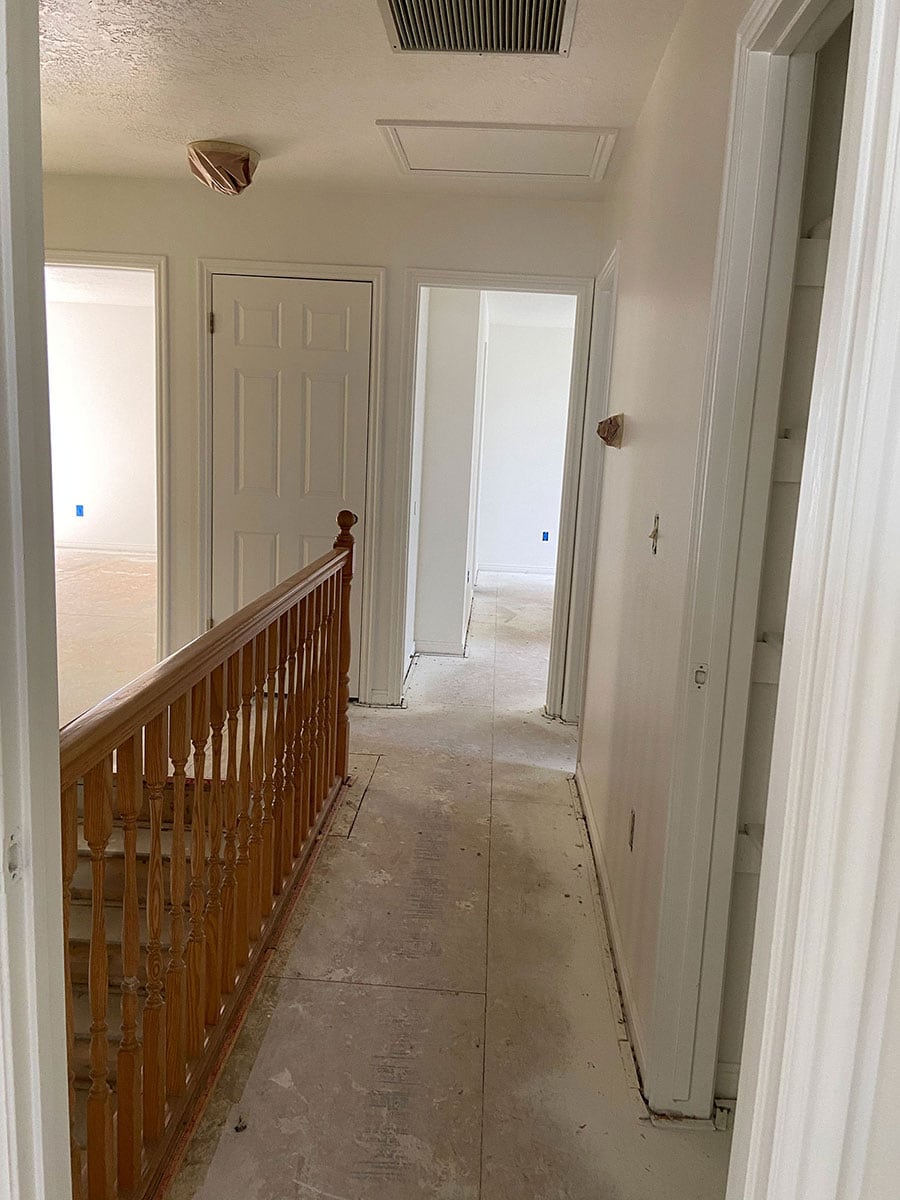 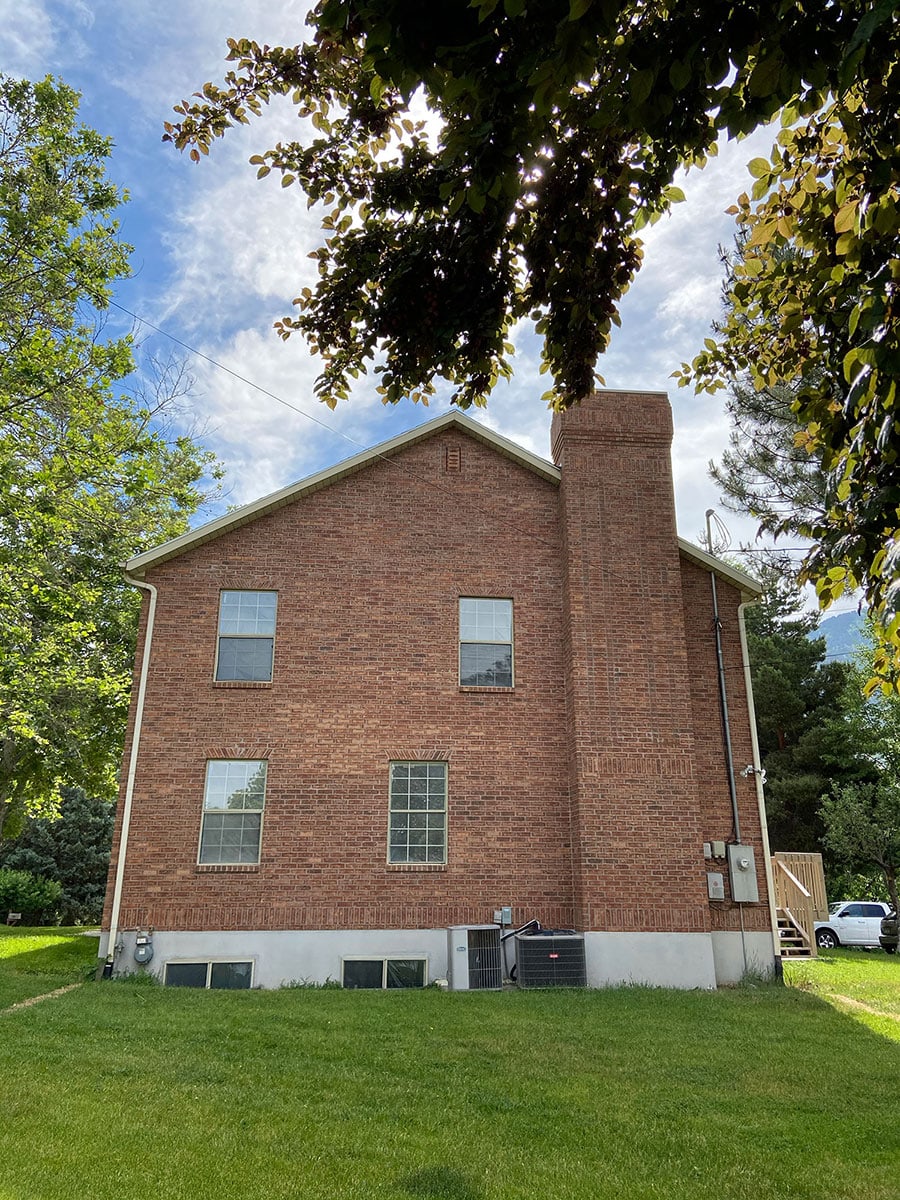 The process to buying this house was probably one of the most complicated ways we could have done it and there were many miracles along the way and a lot of people helping us out to make it happen.

Though I have many people I could thank publicly, I HAVE to give a huge thank you to my attorney, Sara Pendleton of Tailored Legal Services. She’s been our Lars attorney for the last many years and she’s also acted as a broker on a number of houses. She stepped in to offer us advice and guidance along the way so I felt secure and comfortable so we didn’t have to use a real estate agent, which cut down on costs on both sides. In the past she has acted as a broker for people buying houses and then gives a check directly back to you. On a separate note, as a creative business working with a ton of contracts, she’s the best! If you’re looking for someone for your small business, I’d HIGHLY recommend her. She’s saved me and my business many many times. Plus, her background is in the courtroom and she can fight so well and hard for you. But at the same time is so kind and professional. Email me for her contact if you’d like.

It’s rare to find any sort of colonial/Georgian house in this area. We were ready to accept a mid century into our lives. Mid century doesn’t speak to my soul so we are really floored that this one worked out. As you can see, it’s pretty bare and rather boring right now, but we have grand plans in mind for it and I cannot wait to show you the inspiration of what we intend to do with it. One day. 🙂

In the mean time, we have a TON of work to do to get it liveable so we can move in, HOPEFULLY in the next month or two.

If you have any tips on cheap and fast Phase 1 solutions for flooring, kitchens, bathrooms…I’m ALL ears! We gotta get a move on!

Give it all to me!

Before and afters of our home renovation There's so much to say about the experience of doing a TV show not to mention the experiencing...
Read more
Artist Feature