How to make a paper tulip with BYU Magazine 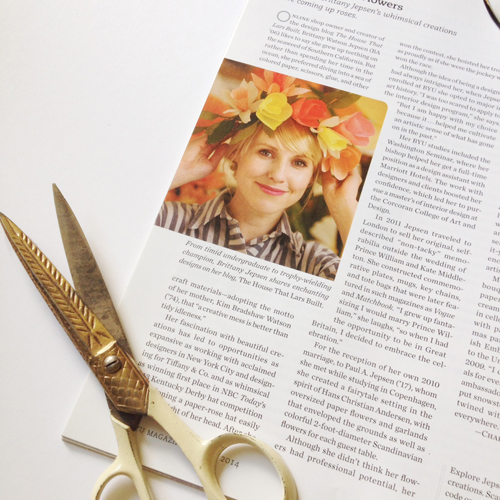 A couple of months ago I was featured with a generous article in the spring edition of BYU Magazine, the alumni magazine of my alma mater. I attended BYU as an undergraduate and I have to admit that I’m shocked that they would want to feature me and my work. Honored, but shocked. I consider this feature meaningful, probably more meaningful than any other feature to date, because of the vast amounts of students who have graduated from BYU and the number of them who are doing incredible things. And here I am cutting out flower petals all day long! It blows my mind.
I had a valuable undergraduate experience but I was a later bloomer (oh the puns!) in every sense of the word. I didn’t really have a firm grasp on what I was going to do in life, but I was a hard worker, a good student, and I went after opportunities. Had I been dead set on becoming an art curator like I thought I should do, who knows where I would be. The flexibility to go with the flow, yet adamantly set on remaining creative in some way, has allowed me to pave my own path in a creative career. And somehow there’s food on the table. I’m continually flabbergasted how life has worked out.
Charlene Winters, the writer of the article, insisted on doing a video to accompany the article and it was just released this week. In it, I teach how to make a paper tulip but I also share some personal experiences as well as some of my beliefs (it is BYU Magazine after all ;). I had a BALL making the video especially with the awesome film crew. I wish I would have gotten some behind the scenes pics. We had a good time. I’m trying to beg them to come back and do more videos with me.
I will warn you, I was sick as a dog the day of shooting. In fact, right after the shoot I came back home and couldn’t move for a full week. Most likely because of that I was into the idea of time efficiency so we did it in one take. Score!
Here’s a link to the article in BYU Magazine or if you still have your copy of the spring edition, you can read it in print there.
Enjoy.