Behind the scenes of our birth announcement video 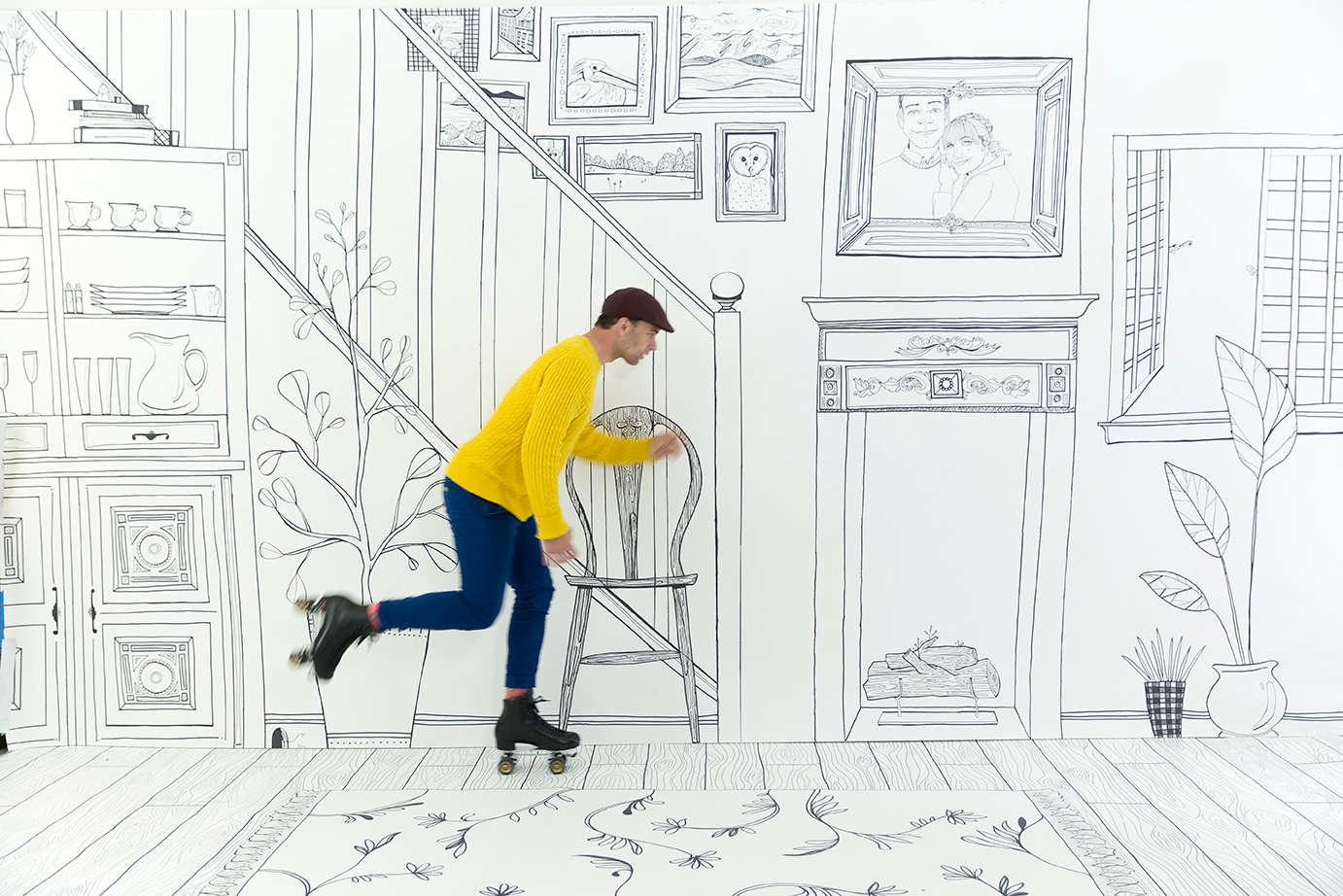 I’m completely overwhelmed at the well wishes that Paul and I have received regarding our good news. We’ve received well wishes from people who have been following along with Lars from the beginning and others who have just joined in. Any way you put it, thank you! Like I mentioned before, the video we created with Trisha Zemp, turned into a much larger project than I anticipated, but now that I’m viewing it a year later, I’m so thrilled that we put so much energy into it. We will treasure it for always (even though we have to watch it on mute now—that song won’t get out of our heads!). Because we started it nearly a year and a half ago during my first pregnancy, we had all completely forgotten that we had Kenyon Brook there to take behind the scenes photos AND Trisha had also created an in-process video, which I may love even more than the video itself. Take a lookie:

Hopefully, you can get a better sense of what what went into the project as well as a hint of Paul’s epic skating skills 😉 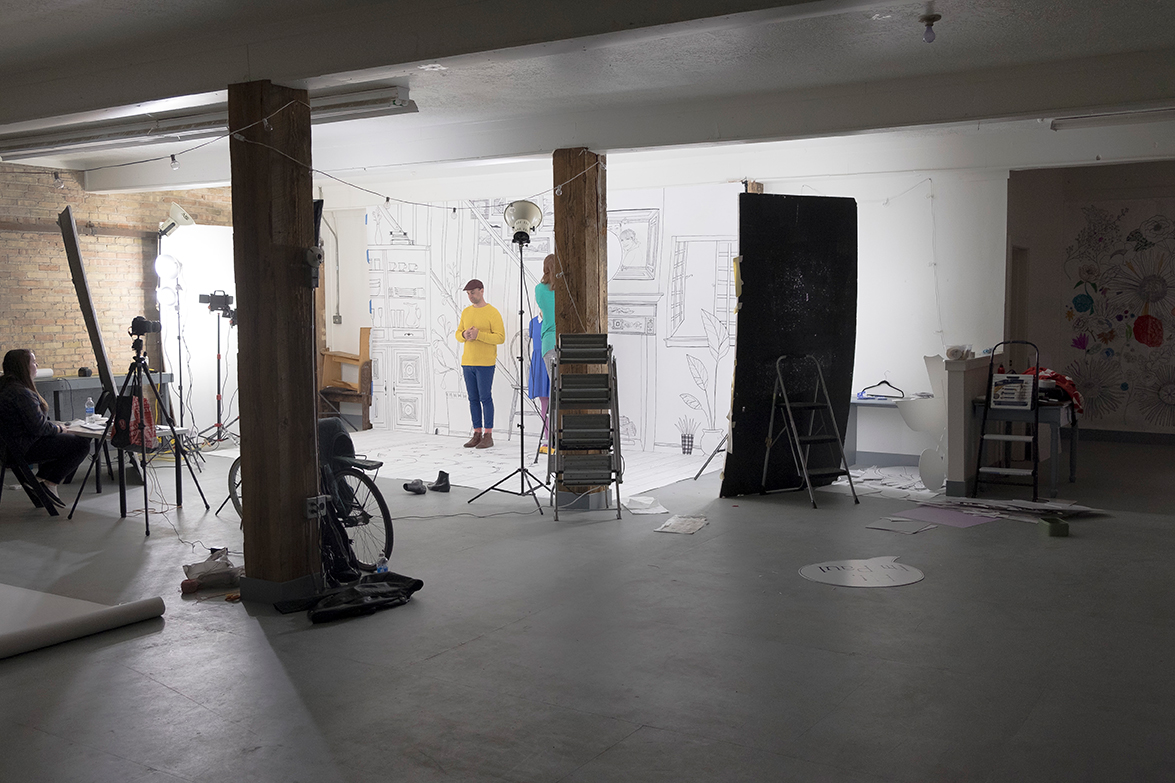 We shot it in our studio. Not having any experience with true-to-life dimensions because we generally work with smaller, table-top projects, it took us awhile to figure out how to concoct the set. Ultimately, we decided to use the largest  photography seamless paper we could find to attach to the wall and ground. We created three different sets thanks to a couple of interns at the time, Lexi Nilson and Tiffany Hilton, who prepped two of them in advance. The third one was one we created in real time the day of the shoot. Tiffany was in charge of some of the smaller props that we hold in the video. Here are some of the drawings she submitted to me. See if you can spot them in the original video: 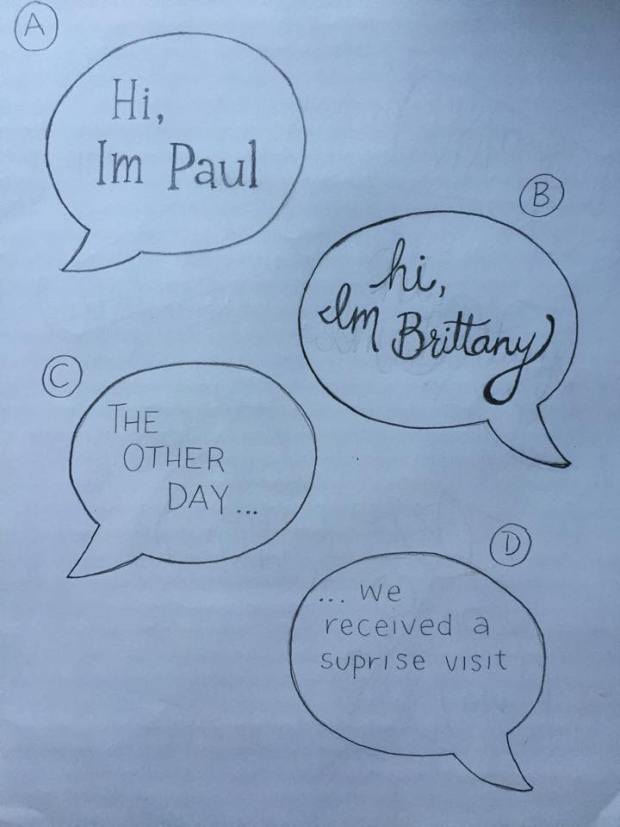 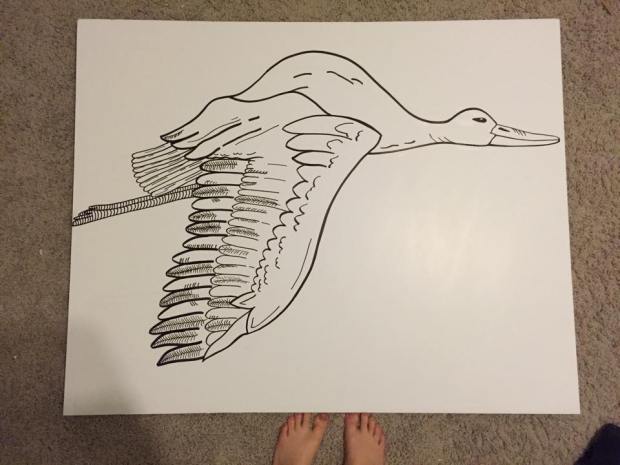 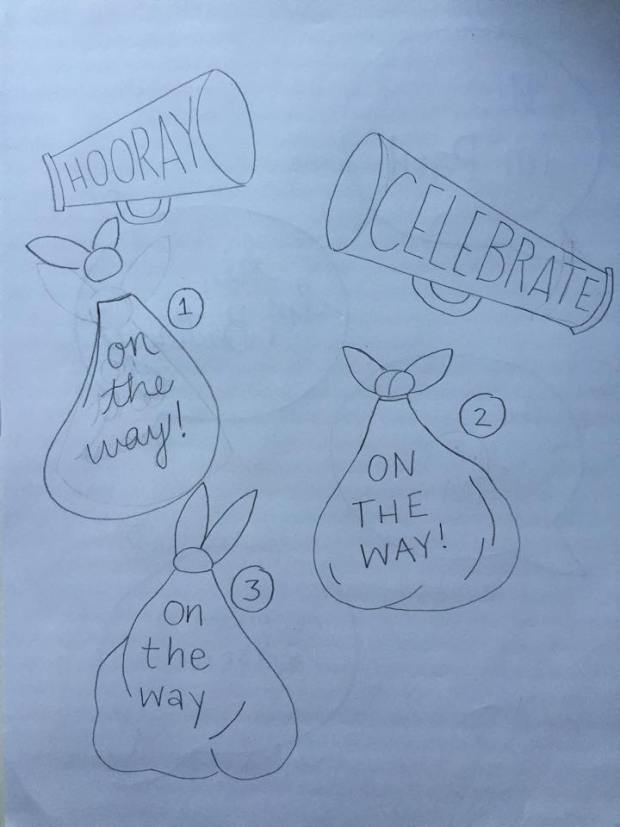 Trisha is the mastermind of the whole project. If you’re not familiar with her, Trisha was my very first photographer intern starting in 2014 and she has since gone onto become the go-to stop motion artist for many companies and recently started a new planner company called Golden Coil, which I talked about here. Her talent, and ambition, and motivation has no bounds. And turns out, she’s also pregnant, so we’ve had a lot to talk about lately! Here she is: 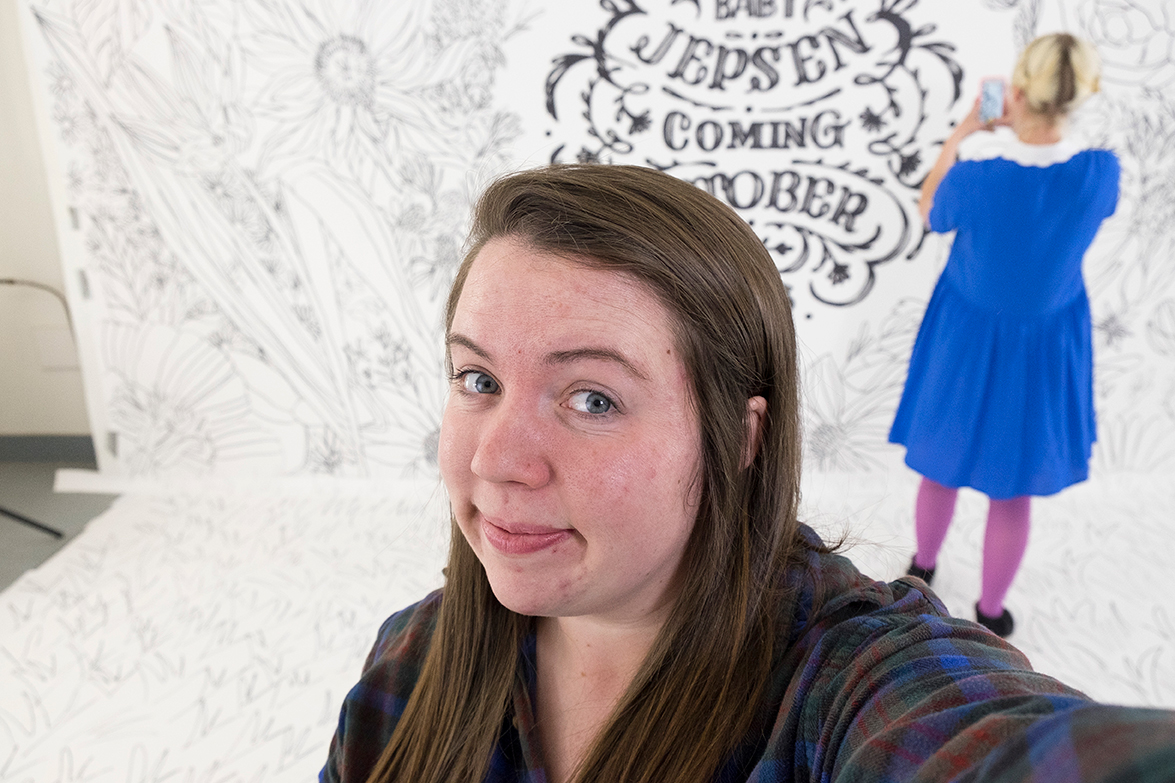 The sets were created out of white paper and black Sharpies, two boxes full. For the last set where we make the official announcement, we filmed it frame by frame, which meant that we had to work fast. We didn’t realize how long the video would take so we ended up calling in the help of many of our willing friends. Thank you to Kenny and Laura, Adrian, Michelle Zemp, and probably more that I just can’t remember. Thank you so much for being willing to step in, everybody! 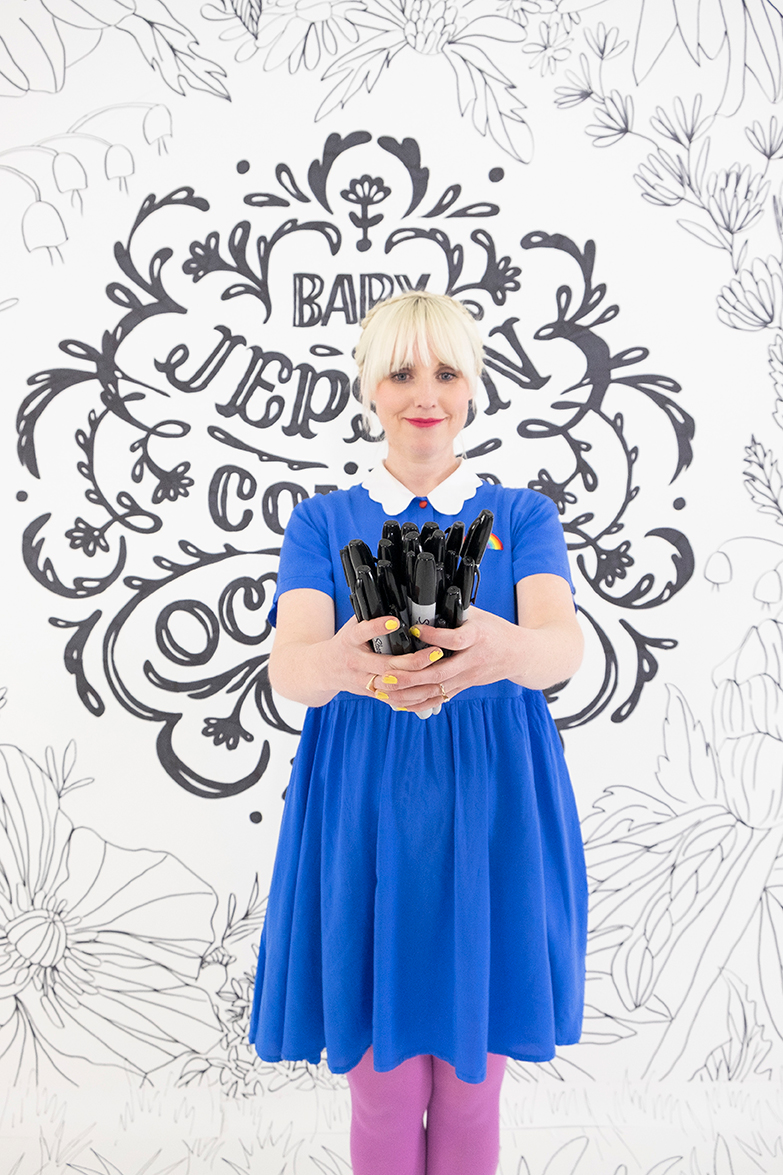 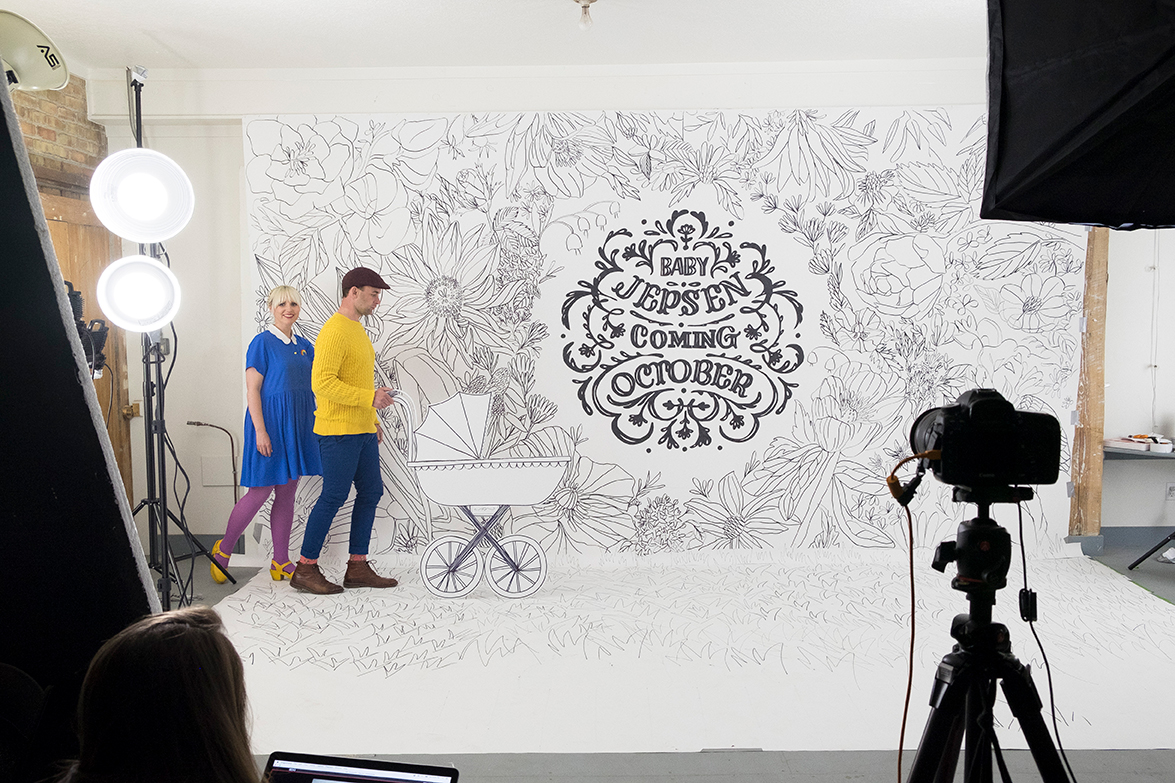 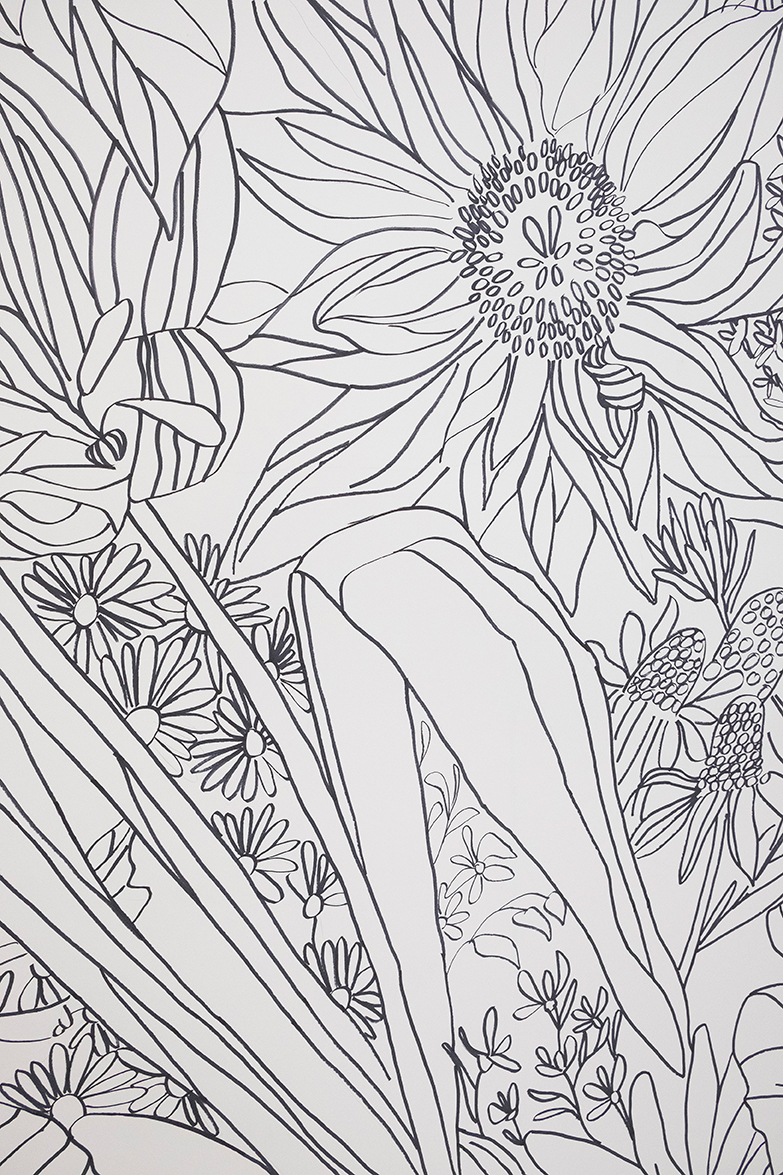 Here you can get a better sense of how the Sharpie lines. Looks more hand drawn once you can get in there, right?! 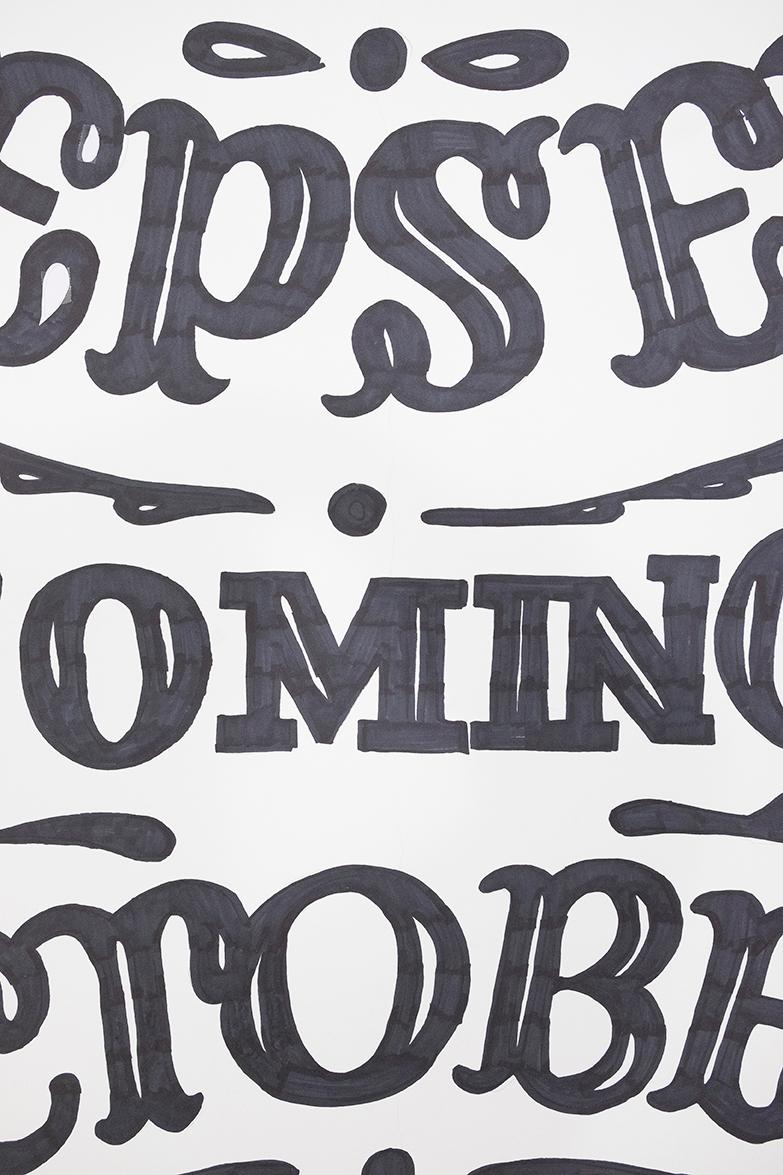 We started by doing a couple of words at one time. We had projected the lettering, created by Jill De Haan, onto the paper in pencil and then I went in and penciled in all the flowers the night before so all we had to do was fill it in with the markers. Because of this, it took much less time the day of the shooting, but more time in preparation. Please note, our actual due date this time around is January, not October. We first created this video for our pregnancy last year, which ended in miscarriage. 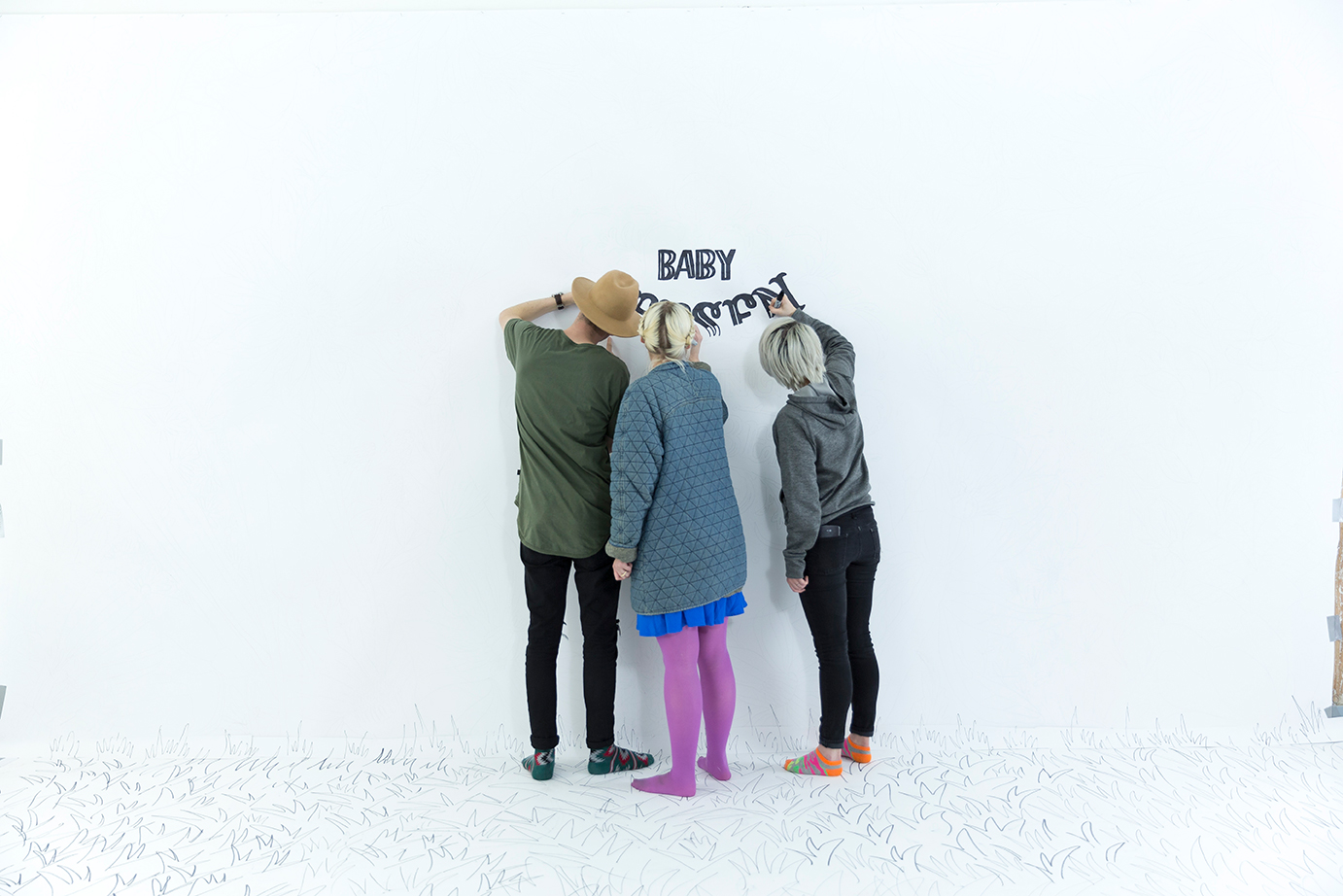 We markered in the phrase first and then filled in the flowers around it before spreading out the full frame. 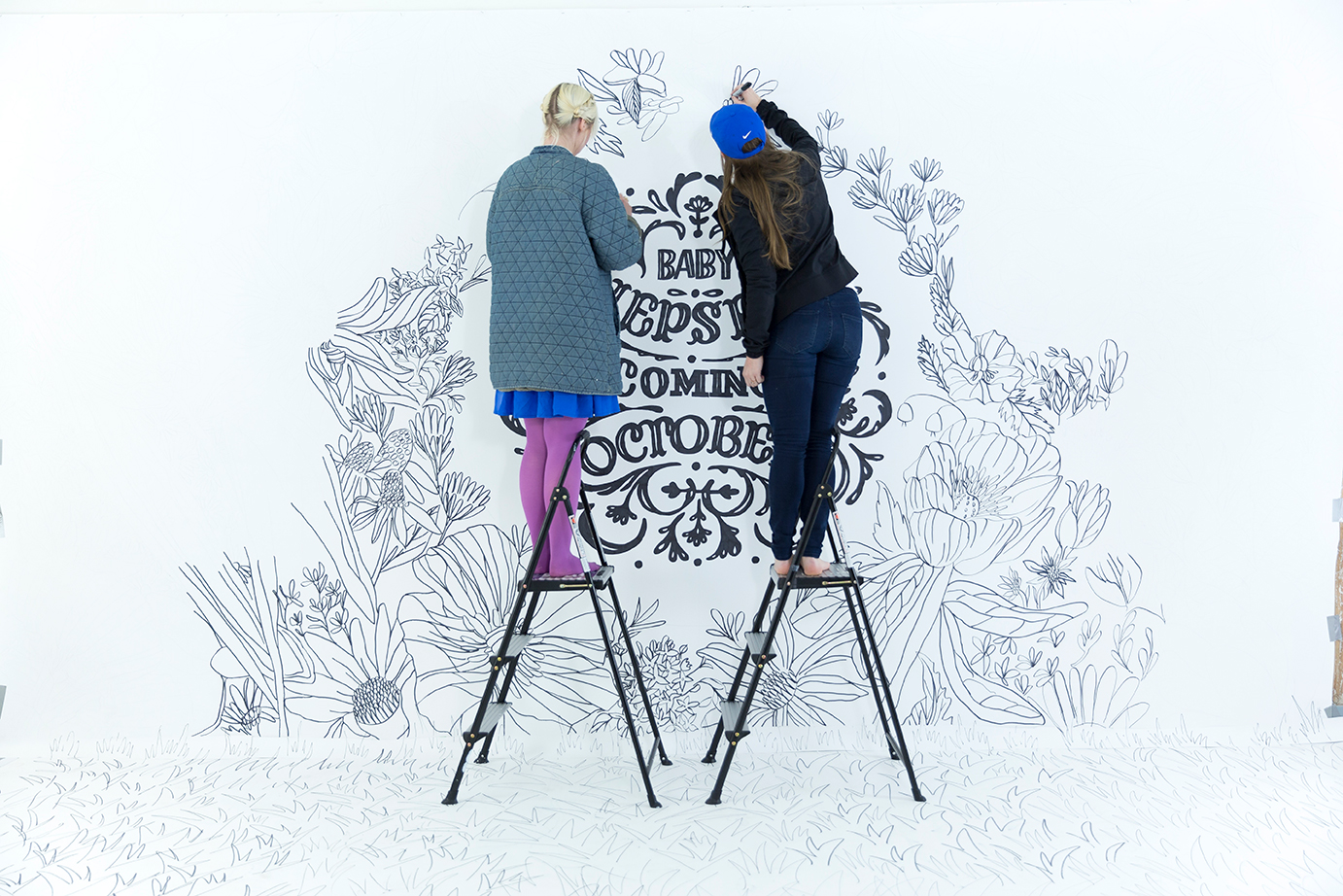 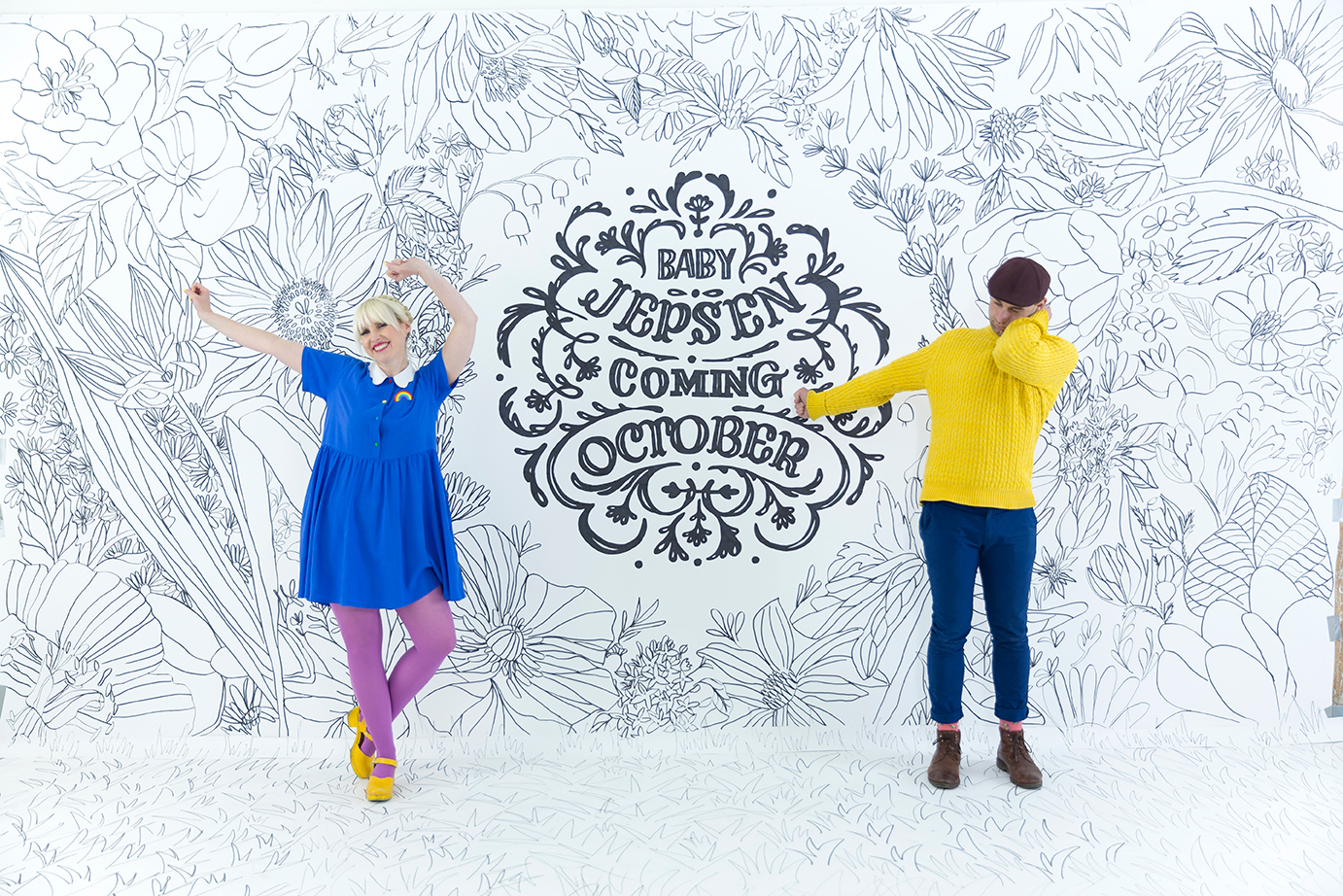 One thing I haven’t mentioned here on the blog yet, but have certainly shared on my personal Facebook over and over, is Paul’s fancy feetwork on roller skates. He just started skating last year but he’s unbelievable. We tried getting some of it into the announcement, but it just didn’t work out with the stop motion very well. Bummer! I’m just glad it got captured for all to see! 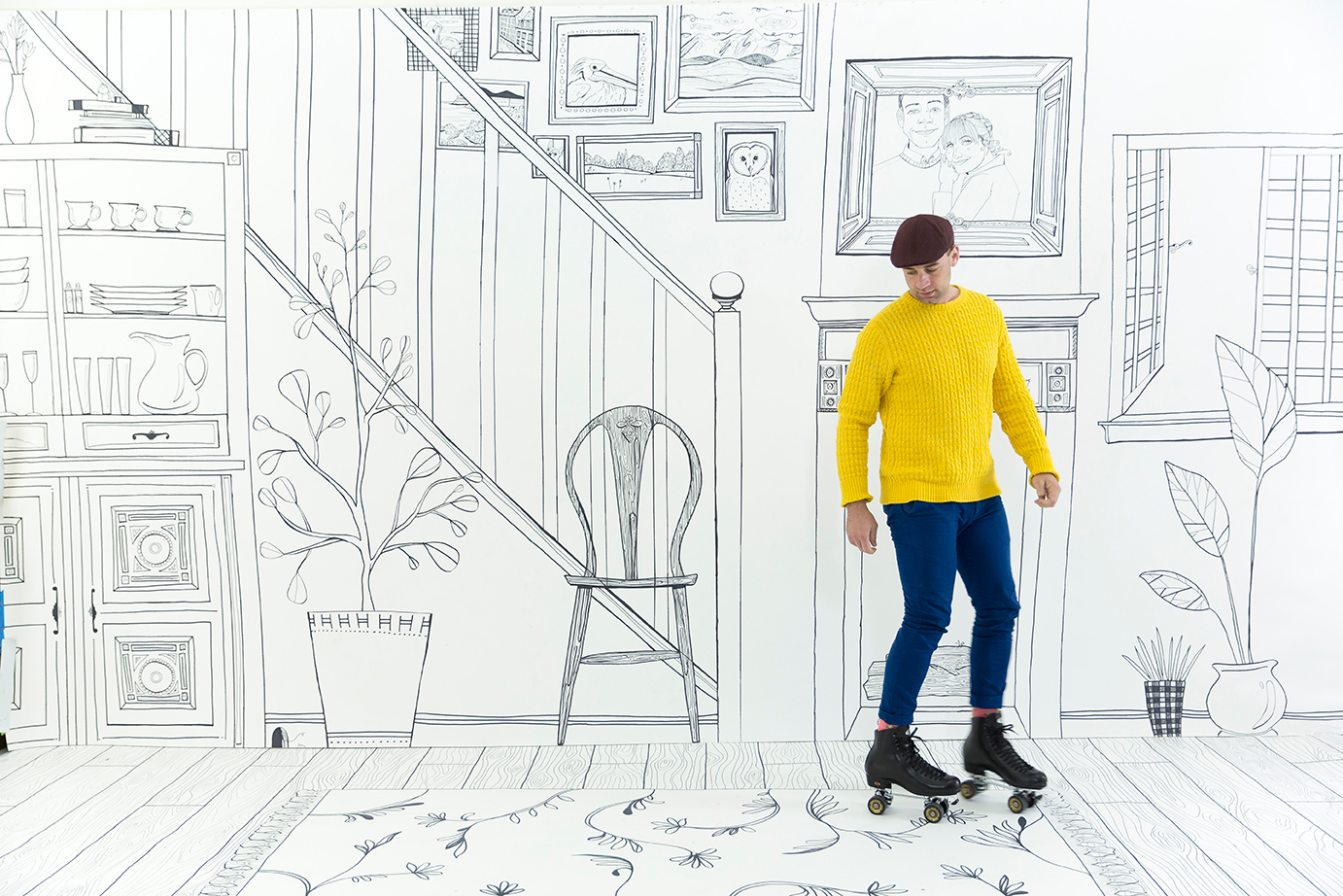 Just doing what I do best 😉 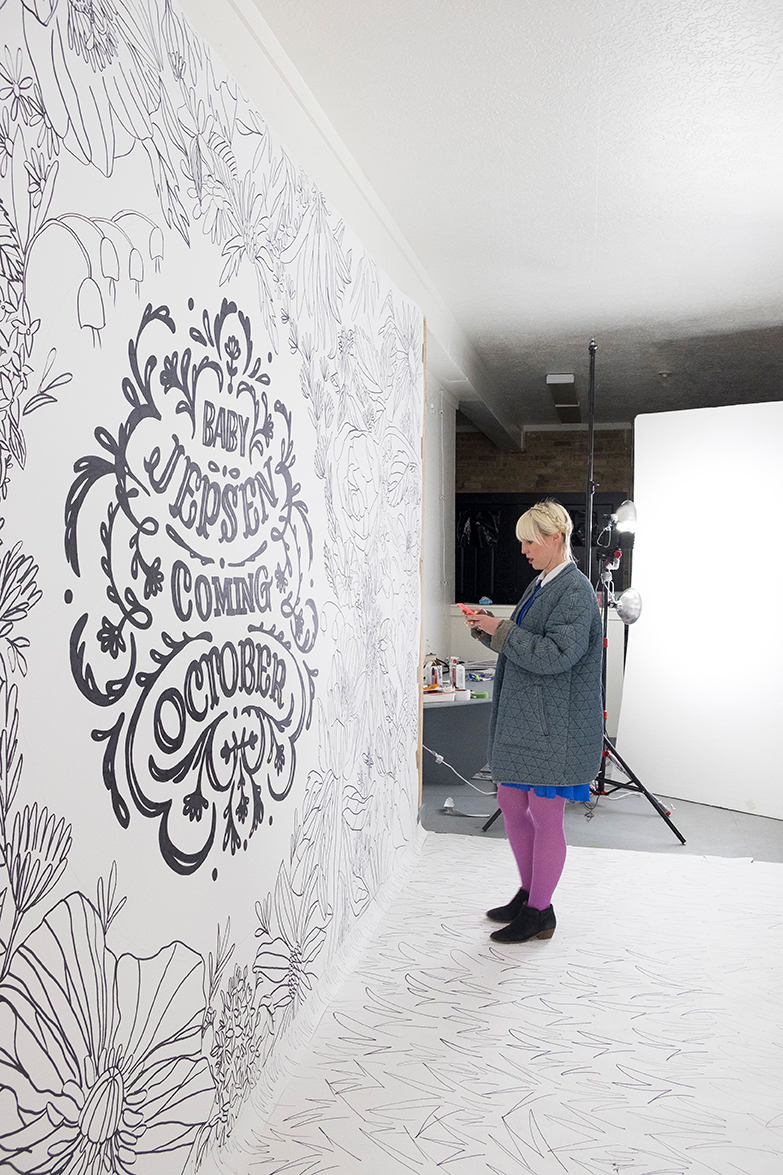 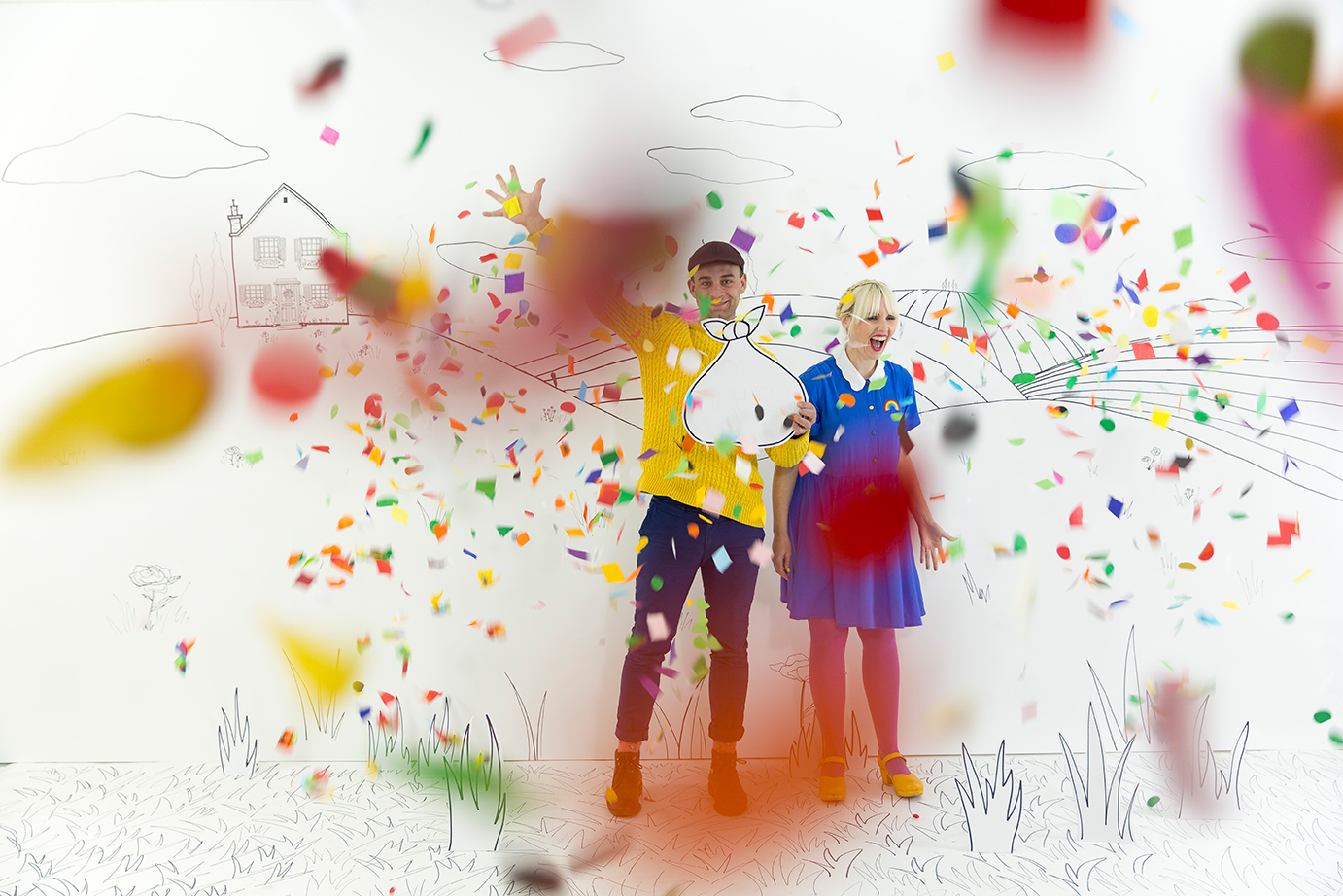 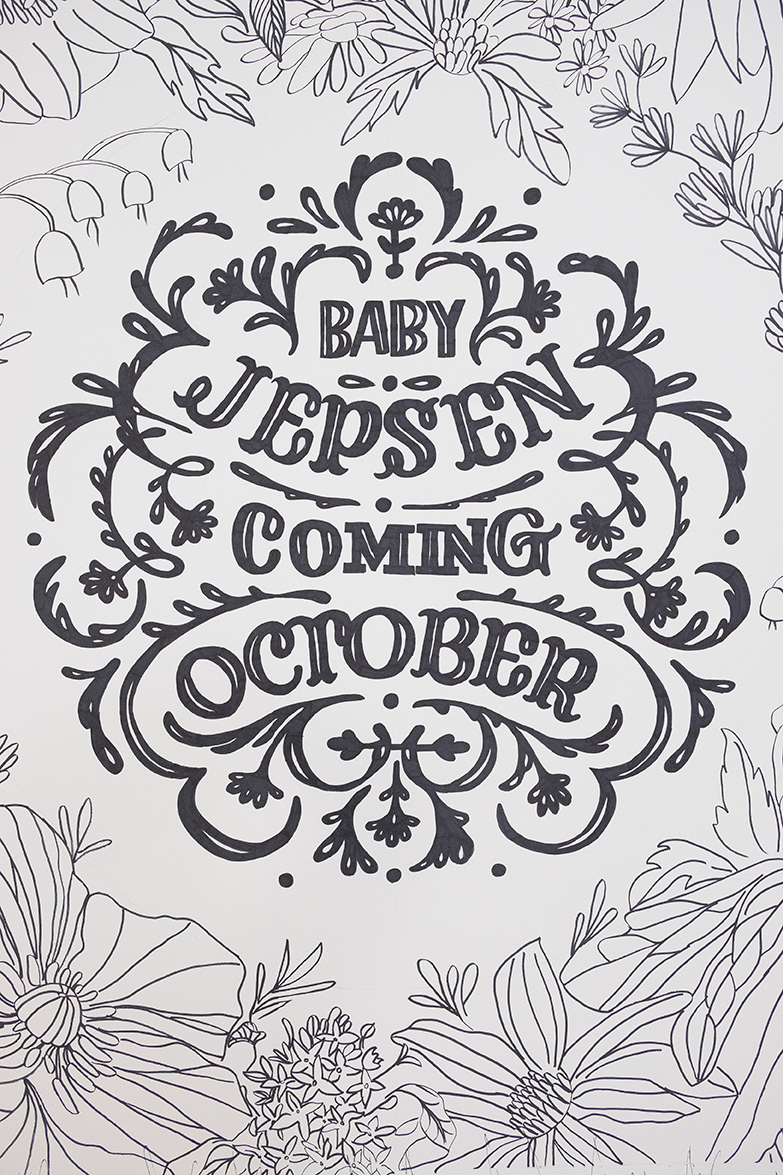 And there you have it! It took one full day of prep and one full, very full, day of shooting with the help of loving friends. Thank you everyone who came out to help! We couldn’t have done it without you. And a HUGE thank you to Trisha Zemp for making this happen both at the time of filming and then creating the behind the scenes video. This will be a treasure for always!

Thank you Kenyon Brook for coming to take behind the scenes photos that day as well as Jill De Haan for the gorgeous lettering (and then re-lettering of the month for the final video!). Thank you to our friends who came to help last minute: Kenny and Laura, Adrian, Michelle Zemp, and Melanie Bunker Ludlow. And thank you to our interns who came to help with the project: Lexi Nilson, Tiffany Hilton, Cassie Tremblay. We feel so lucky to have these people in our lives.

Videos by Trisha Zemp  |  Behind the scenes photos by Kenyon Brook

Our New Team Outfits We are SO excited to be sharing our new team outfits with you! It’s been a long time coming, since all...
Read more

Laundry Room Makeover There were a lot of details to work out for our laundry room makeover with regards to storage and organization. It was...
Read more
advice

My 40th Birthday Plans Leading up to my 40th birthday, I had lots of plans. Specifically, I wanted a big Europe trip to celebrate! But...
Read more